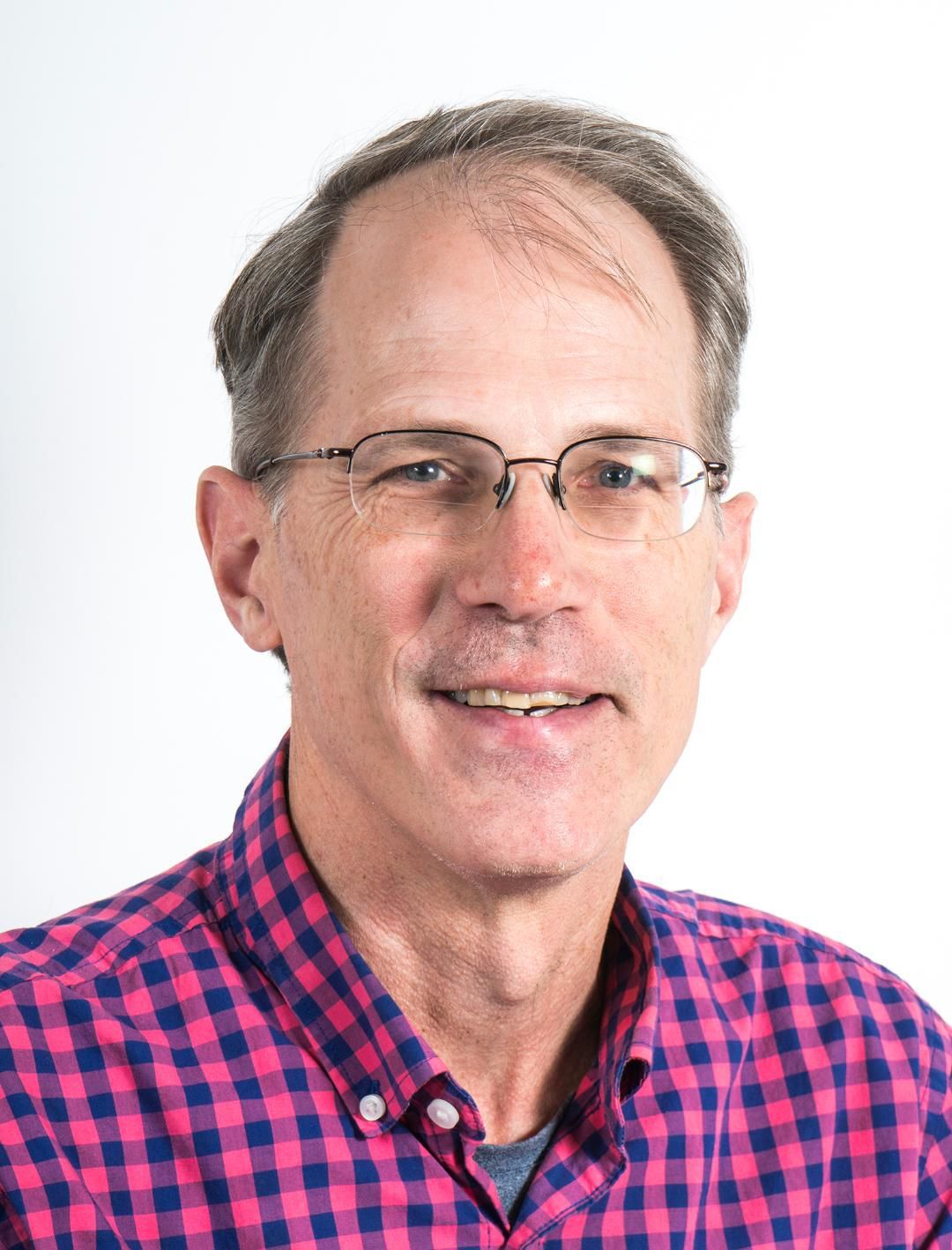 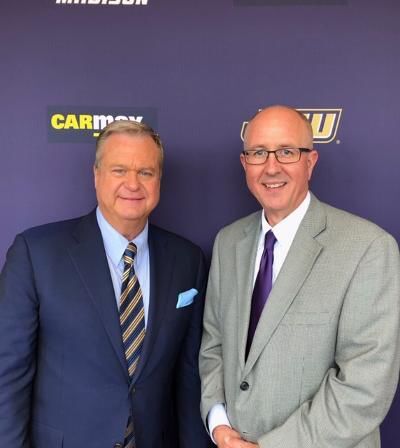 JMU graduate Steve Buckhantz (left) and Curt Dudley, a graduate of Bridgewater, have teamed up the past few years for televised coverage of JMU football and basketball games. 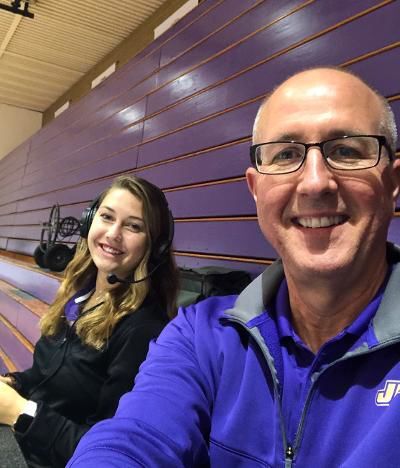 Allie Barefoot (left) has worked on football and basketball broadcasts at JMU with Curt Dudley (right), who retired from full-time work as of June 1. Barefoot got her media start in southwest Virginia, entered JMU in 2017 and will begin work at the NBA offices in New Jersey later this month.

JMU graduate Steve Buckhantz (left) and Curt Dudley, a graduate of Bridgewater, have teamed up the past few years for televised coverage of JMU football and basketball games.

Allie Barefoot (left) has worked on football and basketball broadcasts at JMU with Curt Dudley (right), who retired from full-time work as of June 1. Barefoot got her media start in southwest Virginia, entered JMU in 2017 and will begin work at the NBA offices in New Jersey later this month.

His main responsibility was aiding the coverage of JMU baseball, which had advanced to the College World Series five years earlier. Dudley has been a fixture at JMU ever since, and that doesn’t figure to change a lot despite a recent career transition.

A longtime resident of Bridgewater, Dudley retired as of June 1 as a full-time member in athletics at JMU. Over the years he has become known as the voice of Dukes, covering nearly every sport in a variety of mediums for radio and television outlets, some in-house. His title is now Director of Broadcast Services Emeritus at the university.

“I am retiring full-time from James Madison University but will continue my broadcasting career, and James Madison will be my primary gig” as a freelancer, Dudley, a 1983 BC grad, told me in an interview.

That may allow him to explore opportunities in the region. Late last month, he was in North Carolina to be part of the broadcast on FloSports for the coverage of the Colonial Athletic Association baseball tournament, which didn’t include JMU. That has been a regular event on his calendar for decades in various roles.

The ACC Network, launched in 2019 and with two schools in the state, would be aided by his presence if he so desired.

“I have thought about it, it does open up the opportunity to do other regional work,” Dudley, who grew up in Norfolk, said of his retirement. “I do want to emphasize my primary gig will be James Madison. That will take precedent over all others.”

To that end, he was involved Tuesday in the welcome home celebration in the city for the JMU softball team after the Dukes returned from the College World Series in Oklahoma.

That is one of hundreds of events presided over the past three decades by Dudley, who didn’t plan to retire but was approached by JMU officials earlier this year.

“I was looking at six more years of employment,” he said. “When the administration came calling, they said ‘You don’t have to do this. This is your option, we want to put this on the table and see what the benefits are and if it is financially feasible for you and your family.’ They accelerated the process for me. They sped up the process, which is great for everybody.”

His family in Bridgewater includes his wife, Maureen, daughter Laura, grandson Oliver, who will be 20 months in a few days, and his mother-in-law, Helen McLaughlin. “Four generations,” Dudley noted Wednesday.

For the past few years Dudley has teamed up in the broadcast booth at times with Steve Buckhantz, a 1977 JMU graduate who was dropped – much to the chagrin of many fans – as the veteran television voice of the Washington Wizards of the NBA after the 2018-19 season.

(That decision was so unpopular that one columnist in the D.C. media won’t even mention the person who took over for Buckhantz, who was informed of his dismissal from Monumental Sports/Wizards with a phone call two years ago while at the hospital with his mother, according to reports.)

Dudley and Buckhantz called a JMU football game in Harrisonburg earlier this year against rival Richmond for NBC Sports Washington. They have also teamed up with televised basketball coverage for the Dukes over the past two seasons. While the Dukes were higher ranked, the veteran pros provided plenty of information on the Spiders in the football game this spring.

“I know JMU has benefited, and I know I have benefited, from working with him because he can give us that high-level, professional counsel and help us to get better and to tweak some things,” Dudley said of Buckhantz, who is in the athletic Hall of Fame at Washington-Liberty High in Arlington. “He provides a consulting service to us” of sorts.

Dudley said he picked up a few “subtleties” from Buckhantz that he hopes to implement in the fall with football broadcasts. Yes, you can figure to see, watch or listen to Dudley in the fall when football returns.

Being able to call JMU games has buoyed Buckhantz, according to Dudley.

And “Buck” is in touch with a big part of the fan base. Buckhantz tweeted he was back in Harrisonburg before the recent broadcast.

“He slips in and calls us Madison,” Dudley said. “We have to be conscious of those that were here before us when it was Madison College. That is an important group and alumni base. You have to be respectful of the time they were here. I think he does a nice job of bridging the gap on that. I think that only enhances our production.”

Dudley still plans to work Harrisonburg Turks’ home games as the public-address announcer this season — something he has done since the summer of 1983.

Dudley received the 2018 JMU Unseen Hero Award, which noted his efforts and dedication outside of the public spotlight, according to the Turks’ website.

He has also taught communications classes at JMU and some of his former students or colleagues now work in the media covering pro or college teams or leagues. That includes Allie Barefoot, a sideline reporter this past hoop and football seasons who will begin work later this month for the NBA office in New Jersey, Dudley noted. She enrolled at JMU in 2017.

Many young students and professionals have learned the ropes under Dudley, who got his local start at BC. One of his former students, Kevin Haswell, recently won an Emmy for Outstanding Studio Show as a researcher for SportsCenter on ESPN. Kim Fucci, another former student, won an Emmy for her work with the MLB Network. She was a former student manager for JMU softball from 2013-16.

Eagles’ athletic director Curt Kendall was an assistant baseball coach at Bridgewater when Dudley was a student there. “He had a passion for sports information,” Kendall, who later became the head baseball coach, told me Wednesday. “He was pretty good at it; he always had that voice for announcing” as well.

Joe Browning, the senior associate athletic director/athletic communications at North Carolina Wilmington of the Colonial Athletic Association, has worked for years with Dudley and considers him a friend. “The consummate professional,” Browning, in his 35th year at the school, said. “He has the voice for the job. He has become the voice of the CAA as well. He takes a lot of pride in his work.”

Ben Trittipoe, a resident of Leesburg, worked in sports information at former CAA school George Mason – a baseball rival of JMU. Trittipe has been an official scorer in Major League Baseball in Washington for years, and now does Baltimore games as well.

“I have known him since 1992,” Trittipoe said Wednesday of Dudley. “If I knew if I went to JMU [for a game] I would be hosted well. They were there ready to help you out. He is one of the best in the business. He has a distinctive voice; he has made his mark in broadcasting.”

“What a pro! What class!” JMU football coach Curt Cignetti, who has the best CAA program, wrote on social media last month of Dudley as his full-time days came to a close.

There are a lot of people in the Valley who agree, and we are fortunate Dudley won’t stray far from his BC and JMU roots for the next stage of his career.