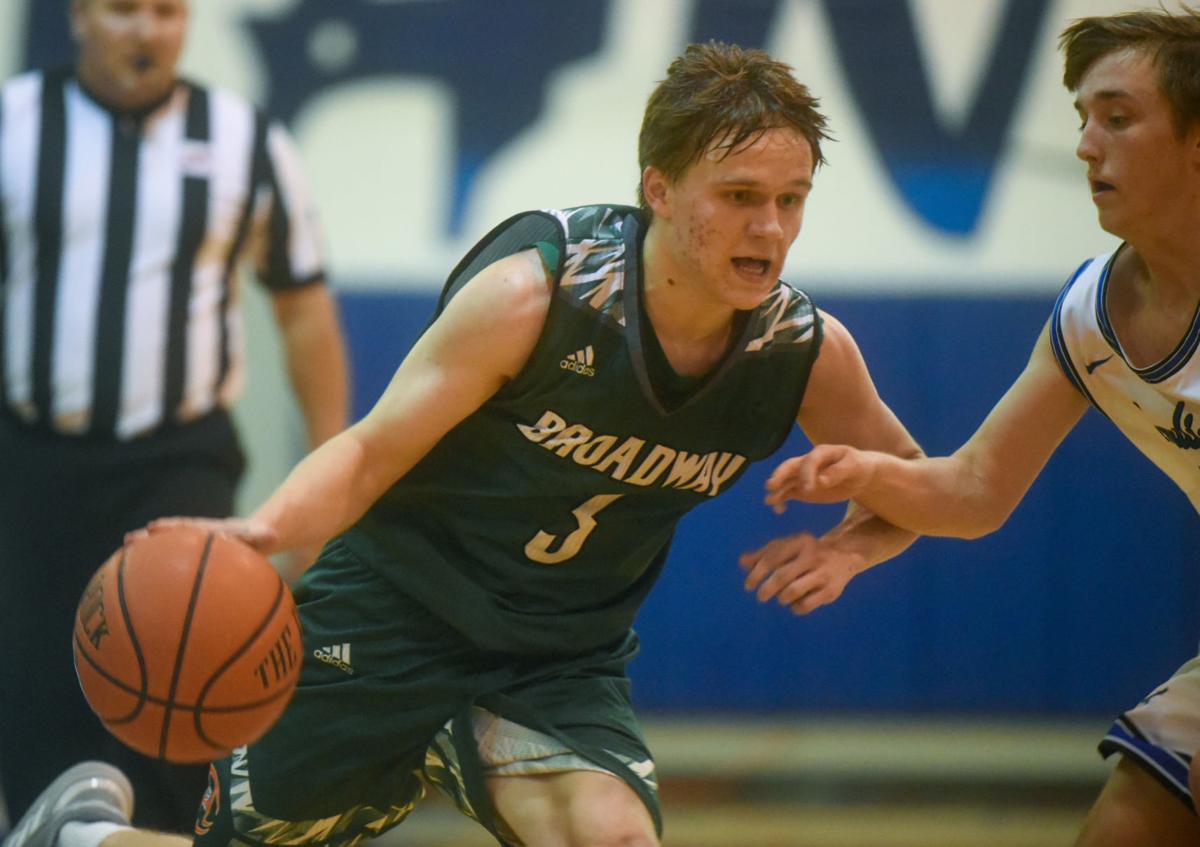 Broadway guard Jaxson Jameson is averaging 8.5 points and 3.3 assists per game this season. 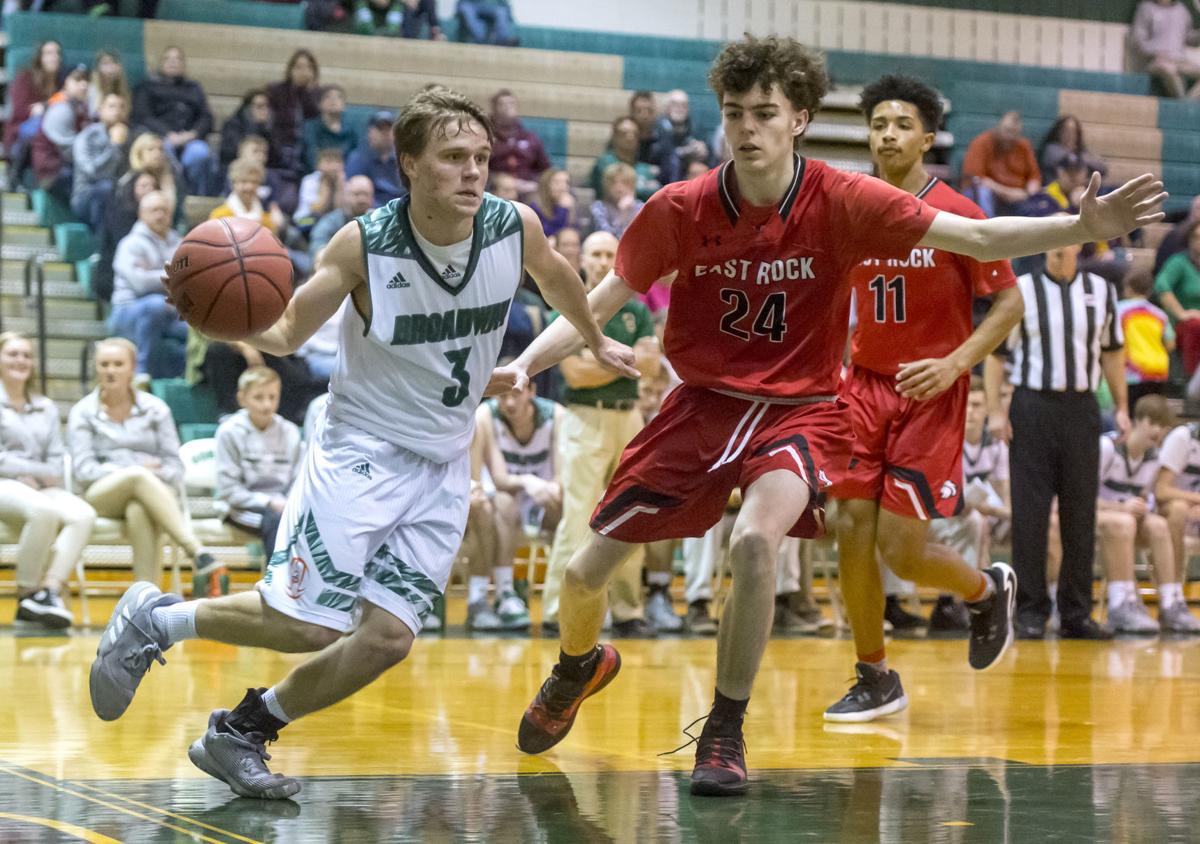 Braodway's Jaxon Jameson hooks a pass to a teammate away from East Rockingham's Da'rius Lam earlier this season. 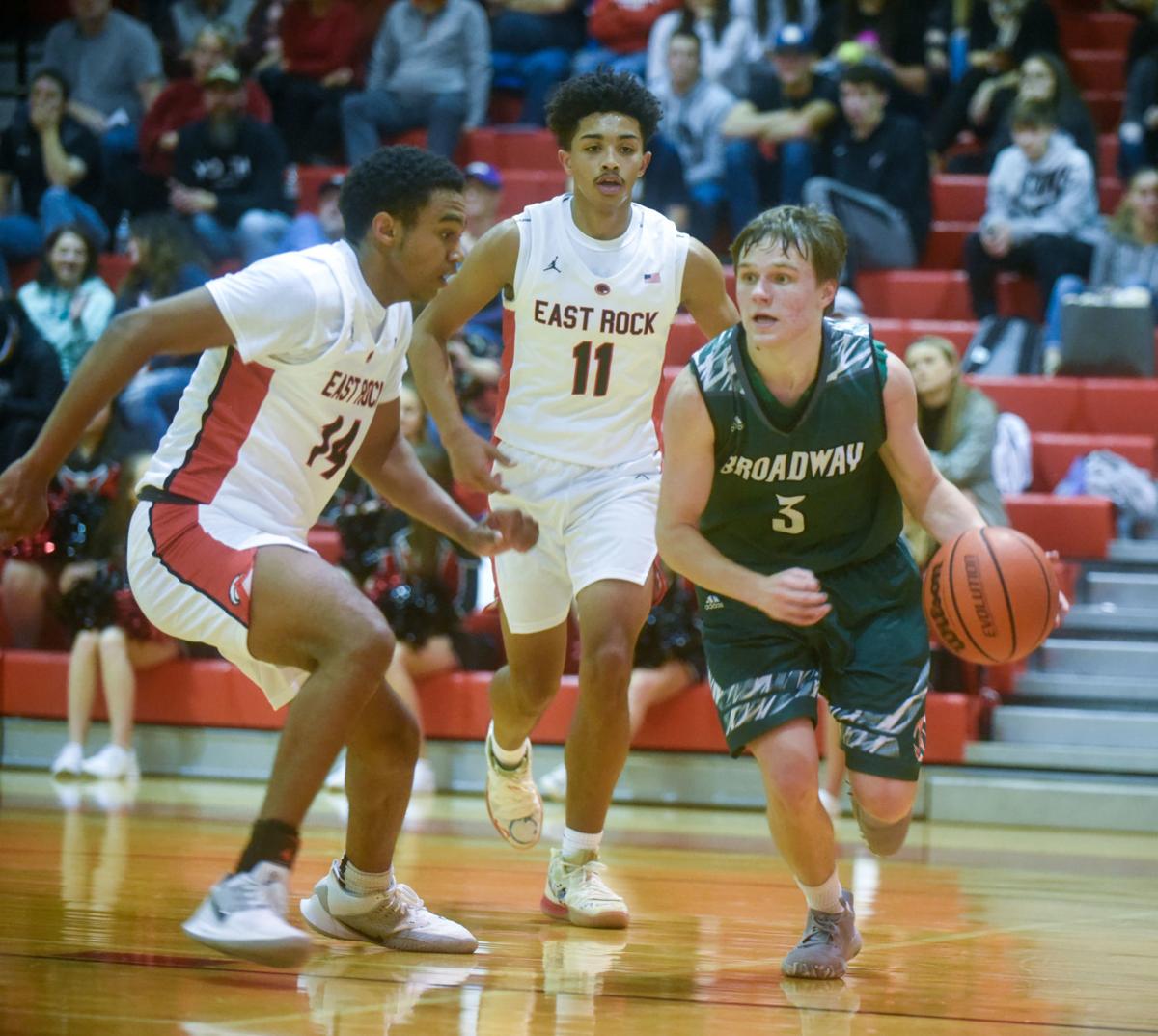 Broadway guard Jaxson Jameson is averaging 8.5 points and 3.3 assists per game this season.

Braodway's Jaxon Jameson hooks a pass to a teammate away from East Rockingham's Da'rius Lam earlier this season.

BROADWAY — Standing there with a blank look as he stared ahead at the banners across the south end of the Broadway gym, Jaxson Jameson rattled off some names of former players.

For Jameson, the green and white threads of the Gobblers have a special meaning.

“I’ve always bled green, I guess,” he said. “I’ve never thought of going anywhere but Broadway and being part of this program. I have a really close connection with everyone that came through. I can name all the lineups from whatever year. All of those connections that I have and a lot of the people in the community that know me — it’s just really nice when you have people you can talk to about things and a lot of support.”

The 5-foot-8 senior point guard for the Gobblers is one of the most experienced players in the city/county when it comes to the number of games he’s played at the varsity level.

Jameson made varsity as a freshman, but his time with the program goes beyond that.

TJ Jameson, who has been Broadway head coach Dwight Walton’s lead assistant 13 of his 14 years with the program, is Jaxson’s father and  considered a big influence.

“Any time you get to be a kid and be in the gym with your dad or with coaches at a young age, it’s going to leave a lasting impression,” said Walton. “It’s going to mold you into the type of player you’re going to be. It’s just a huge advantage, in my opinion.”

With his dad serving as an assistant coach, Jaxson Jameson became the ball boy for the Gobblers boys basketball in 2010 when he was just eight years old. His current teammate, junior forward Nate Tinnell, was also a ball boy for the squad that year.

“We’ve been together since we were young,” said Tinnell, whose father, Willie, is also a longtime assistant under Walton. “I’ve been best friends with him ever since my dad started coaching. He’s been a great influence on me with him being older. He’s taken me under his wing, sort of, and just showed me what to do and how to approach things.”

During Jameson and Tinnell’s first season as the ball boys for the Gobblers, the varsity squad, coincidentally, had one of the most memorable seasons in program history.

Broadway made a magical run that ended with a 69-64 double-OT loss to Potomac Falls in the Group AA, Division 4 state championship game. It was their first state-title game appearance since joining Group AA and first in program history since 1941.

“I could never forget anything that happened that year anyways because it was such a special ride,” Walton said, “but then watching [Jameson and Tinnell] grow and become the young men they are today is a blast. Those are great times to have with your kids.”

As Jameson continued to grow up in the Broadway program, so did his overall game.

As an eighth-grader, he shined on the JV team and then came up to the varsity as a freshman when the Gobblers were in desperate need of a smart and savvy point guard.

That debut season was a strong one for Jameson as he exploded on the Valley District season as a sharpshooting, turnover-free guard that flew under the radar for Broadway.

“It was always a team effort,” Jameson said. “My teammates did a good job of getting me the ball. When you’re a freshman, you don’t have to worry about anything. You just go out and shoot the ball. You kind of fly under the radar your freshman year because no one knows who you are. It’s nice to get those open shots. It was a lot of fun.”

As a sophomore, Walton said coaches knew about Jameson more but he had worked on his game enough to still be effective as one of the top scorers in the area that year.

But by the time Jameson got to his junior and senior seasons, where many anticipated he would be one of the top scorers in the city/county, his game had evolved a bit.

“The thing with me is just watching him grow,” Walton said. “The thing that I am most proud about him is that he’s done whatever we’ve asked him to do for us every single year … By his junior and senior year, he finally had some surrounding players that could score for him. He could have just kept shooting the ball and trying to be that big scorer for us, but he didn’t need to. He’s done what every team has needed him to do. He still continues to do what we have always needed — be a leader, keep our team in control, take care of the ball. He’s been the perfect teammate all the way through.”

Development Over The Years

The team-first approach is something Jameson has displayed since a young age, his teammates said. Ben Alderfer, who is out for the remainder of the season after suffering multiple concussions, said Jameson has evolved as both a point guard and a leader.

“Throughout the years, as we’ve developed, he’s become an all-around point guard,” said Alderfer, who said he has played with Jameson since they were kids. “He’s a great passer, great at bringing the ball up the floor. I mean, he can tear through any press.”

Jameson said he realized early on his varsity career that relying on his outside jumper wasn’t going to allow him to play at the next level, so he decided to improve other areas.

That started by playing with Team Blaze and current Eastern Mennonite High School coach Chad Seibert and facing elite competition on the AAU circuit each summer.

“While I was going to all of these different places, I was really able to improve my defensive game as a smaller guy,” Jameson said. “Trying to get better at ball handling and passing — it’s something I struggled with in the past, but playing with different people and players has really opened my eyes about what I needed to work on.”

Walton credited Jameson for that commitment to bettering himself on the court.

The veteran coach said that when kids grow up around the game, it can go one of two ways — they either grow to love the sport or they eventually despise everything about it.

“Not every kid will take that on their shoulders and say, ‘Hey, this is the game I want to play and be good at,’” said Walton, who son, Zach, also played for the Gobblers. “He certainly did that. His basketball IQ is so good because he paid attention at a young age. I think that’s what made him such a smart basketball player. He was a little gym rat from the time he was eight years old. To this day, he shoots 100 shots after practice.”

When coaching son, Zach, in the early 2010s, Walton said the two had a special relationship on the court as a coach-point guard duo. He said that dynamic still exists between him and Jameson and the camaraderie they’ve built throughout the years.

“He has a very level head on his shoulders,” Walton said. “He knows what’s right to do in the game. He’s lived his life right on the floor and off the floor. He’s a young man that I really, really am going to miss when he’s not here to play basketball for me. I will always be part of his life and see him play at the next level. My point guards have always been so important to me so that I have a way to communicate with my team. Having him for four years has spoiled me to death. It’s been really, really sweet for me as a coach.”

The family feel about the Broadway program didn’t just happen by coincidence.

Walton’s son played in the program, Jameson is the second of TJ’s kids to play there, Willie Tinnell has helped since Nate was four. Walton said another former coach also had two kids that played pivotal roles for Walton and the Gobblers from 2006-2012.

“I don’t typically get after them or yell at them too much,” Jameson said. “If I do raise my voice, they do a good job responding. We’re all friends off the court. It’s like my family. I feel like a brother talking to a brother. It’s great. It’s pretty nice to have that [balance]. I grew up playing with Nate and Ben and Caleb [Williams] came along the way. I’ve been playing with these guys since I was 10. It’s just natural. I know where people are going to be and they know where I’m going to be. It’s nice to have that chemistry on the court.”

Serving as a captain and point guard for the Gobblers, Jameson embraces leadership.

He said being around the game and learning from his father has had a great influence.

“I actually do want to get into coaching,” said Jameson, who boasts a 4.2 GPA. “There’s been a couple of times in practice where I’ll draw up a play or something and when it works, it feels great. I can definitely see myself going down that path eventually.”

Now as he enters the final stretch of his senior season before heading off to play in college — he’s being heavily recruited by several schools in the Old Dominion Athletic Conference — Jameson said he’s not as locked in on winning games as having fun.

“Last year, I was hardcore focused on the game and that aspect,” Jameson said. “This year, I started saying, ‘Let’s just have fun.’ Coach Walton really took that to heart and our guys kind of jumped on that and it’s been a good thing for us. We’re just starting to stay relaxed and going to play the game. You never know when it’s going to end.”

As Jameson thought back to the guys that reached the state championship, he reminisced on the memories and names of all the players that came before him.

The reason he remembers those names so well, he said, is because of the impact they had on his development as a player and person. Now he wants to do the same for the future of the Broadway program because, as he said, he’s just always bled green.

“The championships come and go, but the memories you pass on and the generations that you impact later go on forever,” Jameson said. ‘That’s the beauty of it all, I guess.”