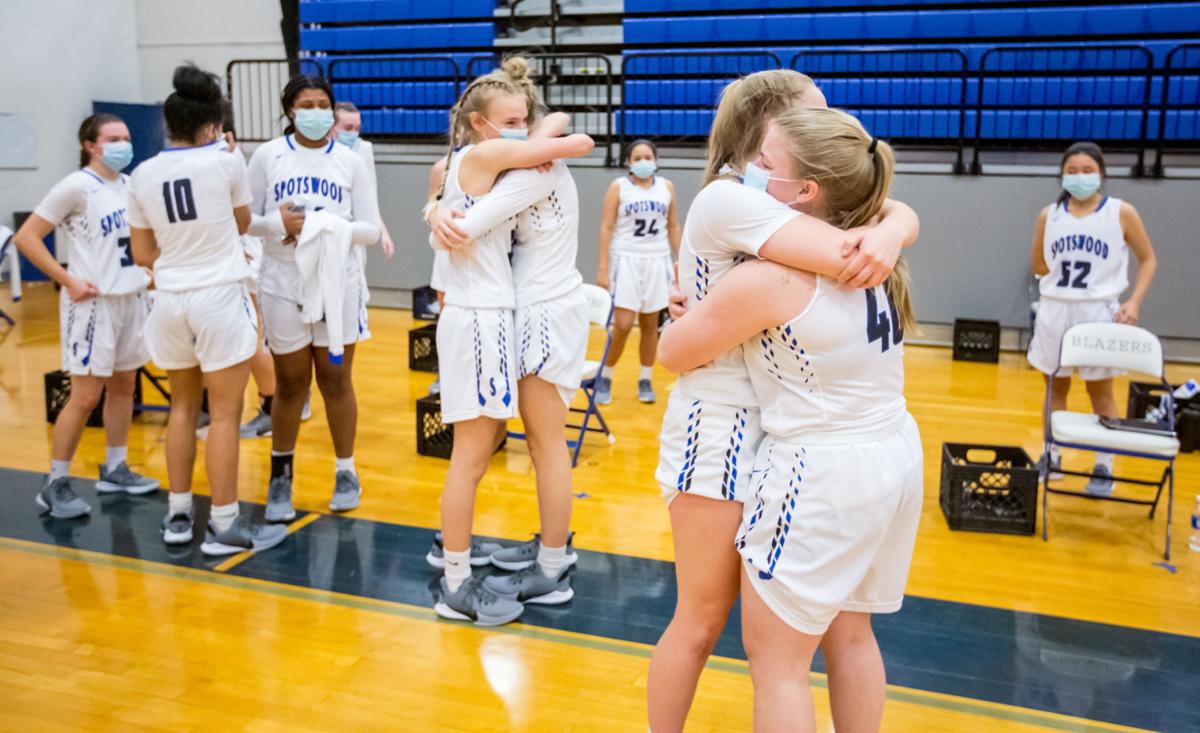 The Spotswood girls basketball team reacts after losing 65-49 in the Class 3 state championship game to George Mason on Saturday. 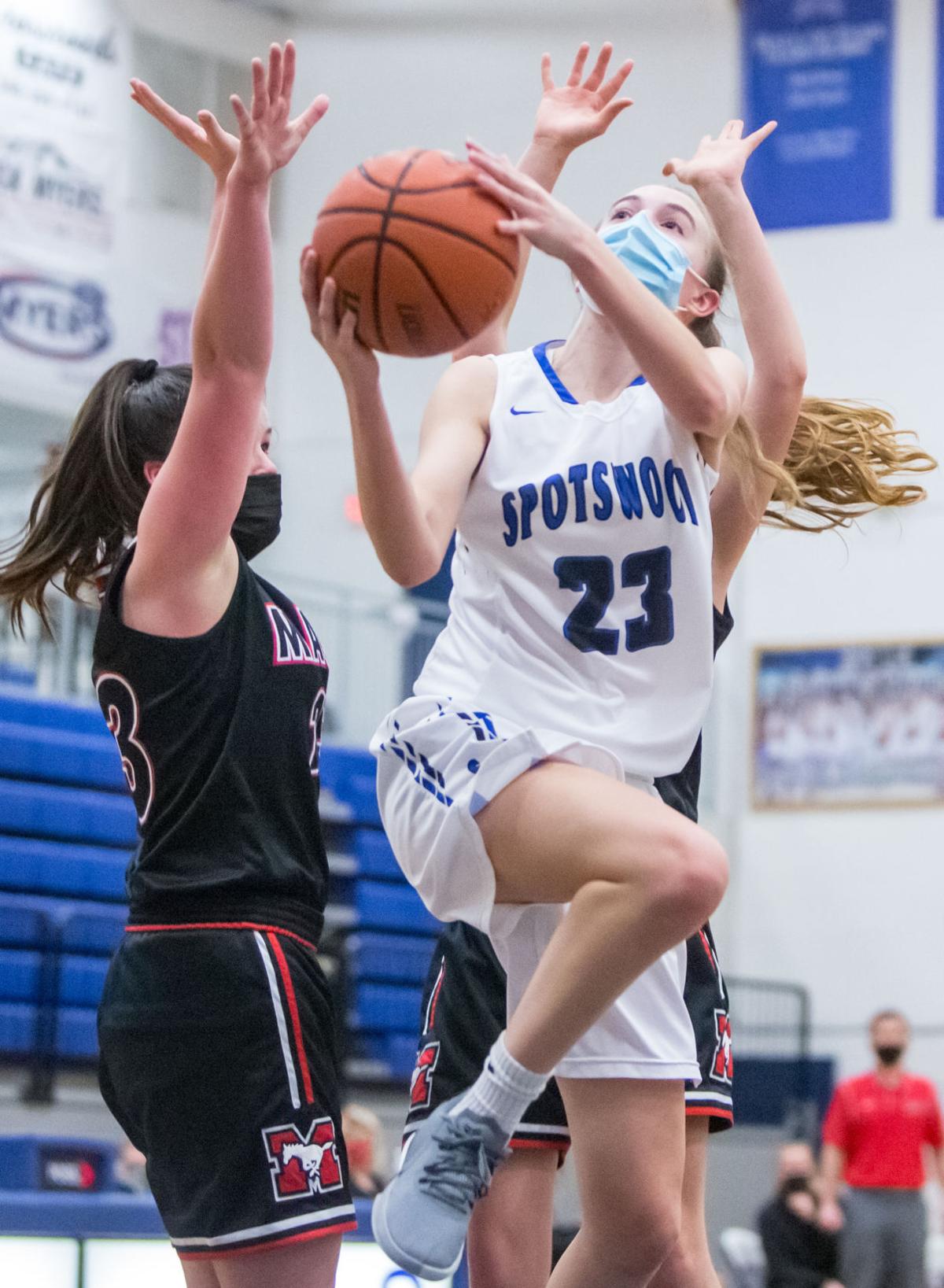 Spotswood’s Abby Branner goes up for a shot against George Mason’s Megan Tremblay.

The Spotswood girls basketball team reacts after losing 65-49 in the Class 3 state championship game to George Mason on Saturday.

Spotswood’s Abby Branner goes up for a shot against George Mason’s Megan Tremblay.

The Spotswood senior guard wanted that third state championship ring. It would have been the perfect cap on her career and put herself in elite company at SHS.

But there was a time in the fall where the Trailblazers didn’t even know if they would play a game this season. Then, once they did, they were overlooked by many as a team that would be stuck in a rebuild after losing so many pieces.

“We lost a ton of people last year and people doubted us at the beginning of this season,” Branner said. “No one had any faith that we’d get this far. To come this far as a team is really amazing and I’m proud of everyone.”

A win would’ve marked the seventh state championship in program history for the Trailblazers. Instead, the loss ends the careers of three seniors that have played pivotal roles over the past three years in Branner, Kayci Carrier and Emerson Adkins.

“It’s just a tough ending,” Spotswood veteran coach Chris Dodson said. “You can’t be sad. For the seniors that are leaving, they’ve won two in a row and had a chance to win three. No one else has done that. We weren’t picked to win our own district, much less the region or to be at this.”

For the first five minutes of the game, it appeared the Trailblazers were about to make history and become the first team in program history to win three state championships in a row.

Branner, who has been the area’s most lethal scorer the entire season, tallied seven of the Trailblazers’ first nine points as they jumped out to a 9-2 lead.

But just as quickly as Spotswood gained momentum, it lost it. The Mustangs of Falls Church began to use a suffocating defense to even it up by the end of the opening frame and later went into the half up by four.

“They trapped [Trailblazers guard] Zoli [Khalil] from all areas of the court, came at her from different directions,” Dodson said. “It sped us up a little bit. The thing you saw tonight is that we played a team that earned it. They came out, did everything the right way. Where we were a step slow at times, they were never a step slow. Where we got our hands on balls, they grabbed balls. Where we missed layups, they finished. They were a very disciplined, well-coached team.”

George Mason then opened up the third on a 22-6 run that opened up an 18-point lead and never looked back. It was the first loss for the Trailblazers (10-2) since a regular-season setback at the hands of county rival Turner Ashby.

“It seemed like they just fed off the negatives for us,” Dodson said of the Mustangs. “When we turned the ball over or missed a shot, they found a way to capitalize. They handled our pressure when we pressured them. I thought we were doing great in our half-court, [man-to-man] defense but once we struggled offensively, they just kind of took over a bit.”

Branner finished with 27 points, two steals and two blocks in her final game for Spotswood while Carrier finished with two rebounds in the finale of a season in which she showcased the growth she’s made since entering the program.

Late in the game, with the score lopsided, Adkins entered the game for the first time since suffering a torn ACL in the offseason. The Trailblazers softball standout then scored a bucket with just over 17 seconds remaining that provided an emotional lift for the Spotswood bench as it dealt with the crushing loss.

“They have a great half-court trap,” Branner said of George Mason. “When people are coming at you so fast, it’s hard to readjust and hard to setup our plays. Props to them for a great game.”

“The toughest thing for us at this point is that we’ve got to learn from this if you’re coming back,” Dodson said. “We have to see why we lost this game. The No. 1 reason is discipline and they were a lot more disciplined than us tonight.”

As Branner wiped away the tears from her eyes, she couldn’t help but boast about the progress the Trailblazers made during a season that posed challenges unlike any other in history.

The Spotswood senior doesn’t leave satisfied, she said. Instead, she leaves proud.

“Spotswood has been great,” Branner said. “I love our coaches so much and our team. We’re like a family, one little family. We come together and enjoy the game. It’s been a lot of fun.”