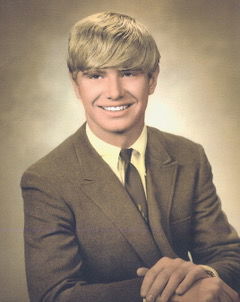 Mike Morrison is shown in his senior class picture at age 18. He was murdered the night of his senior prom. 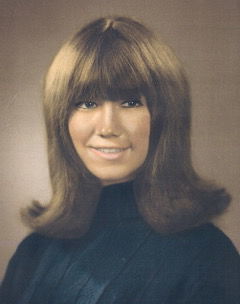 Debra Means is pictured in her class photo. She was murdered along with her prom date, Mike Morrison, in 1969. 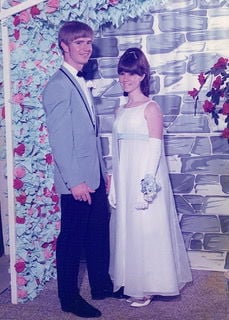 Mike Morrison and Debbie Means attend their Mascoutah High School prom in 1969 before being killed that night. Their killings are chronicled in Ed and Mindy Morrison’s new book “Bad Moon Rising.”

Mike Morrison is shown in his senior class picture at age 18. He was murdered the night of his senior prom.

Debra Means is pictured in her class photo. She was murdered along with her prom date, Mike Morrison, in 1969.

Mike Morrison and Debbie Means attend their Mascoutah High School prom in 1969 before being killed that night. Their killings are chronicled in Ed and Mindy Morrison’s new book “Bad Moon Rising.”

His brother, Ed Morrison, said he listened to the song the night of his senior prom at Mascoutah High School in Mascoutah, Illinois, before picking up his girlfriend, Debra Means. Little did he know the song’s lyrics, “Don’t go ‘round tonight; It’s bound to take your life; There’s a bad moon on the rise; I hope you got your things together; I hope you are quite prepared to die,” would foreshadow his fate later evening.

Mike Morrison and Debra Means went to prom on May 3, 1969 and never came home.

On the 50th anniversary of their deaths, Ed Morrison and his wife, Mindy Duncan Morrison, who now live in Harrisonburg, published a book recollecting the horrific murders called “Bad Moon Rising: The Prom Night Murders Memoir.”

His brother was shot in the back of the head three times and his 15-year-old girlfriend was raped and strangled. Their bodies were found two days later near an abandoned strip mine outside of Mascoutah.

Ed Morrison, 67, and Mindy Duncan Morrison, 66, moved to the Shenandoah Valley in the summer of 1995. They previously lived in Germany for seven years while Ed Morrison worked for MetLife insurance company and his wife taught at Ramstein Air Base.

He was inspired to write down all the facts about his brother’s murder after attending a book launch in March 2018 where other authors read personal short stories that moved him. He wanted to record his family history to pass down to his children.

“I wrote 12 pages,” Ed Morrison said. “The 12-page short story then mushroomed into this [book].”

The story “was so compelling,” Mindy Duncan Morrison said, “It just kept growing.”

The couple conducted extensive research, interviewed dozens of sources and wrote the book over the course of 16 months.

“Since March of 2018, both of us have been writing nonstop,” she said. “Hours and hours every day.”

Ed Morrison interviewed former police investigators, attorneys, judges, prison staff and survivors of another attack. He had kept a scrapbook of newspaper articles of the slayings and started to contact the people who were mentioned in the articles.

“Some had passed, some were still alive and had terrific recollections,” he said.

He poured over police and prison records of the killer, Marshall Wayne Stauffer.

Stauffer, who was 39 at the time, was captured in California on May 29, 1969 and arrested in connection to the killings. His employer notified police after he disappeared following the murders, according to a Feb. 7, 2019 article in the Belleville News-Democrat in Belleville, Illinois. Investigators found blood when they searched his trailer in Illinois, the report stated.

Stauffer was then connected to another rape and armed robbery in Clinton County that occurred eight days before the Mike Morrison and Debra Means murders. The victims, also two teenagers, survived the attack. Stauffer plead guilty to the crimes and as a result of a plea bargain deal, the two first-degree murder charges against Stauffer were dropped. He served 21 years in prison for the other rape and armed robbery.

The community was outraged by the court’s decision to drop the murder charges, as reported by the Belleville News-Democrat. The case received much attention throughout southern Illinois and the St. Louis metro area. Mindy Duncan Morrison grew up 100 miles away in Du Quoin, Illinois, and remembers hearing about the murders in the news several years before she met her future husband.

“It was something we were all following in the newspapers and on the TV at the time,” she said. “It was big news at the time.”

Stauffer was released in 1990 but was arrested again a few years later in connection to three rapes and a kidnapping that occurred in three different states. In 1993, he was given a life sentence. He died on March 28, 2002 at a correctional facility in Idaho at the age of 71.

Although Stauffer’s immediate family members have since died, Ed Morrison was able to track down and make contact with two of his nephews, who didn’t know much about their relative but said he was the “black sheep of the family,” according to Ed Morrison.

He believes Stauffer may be connected to many other unsolved cases.

“He was a serial rapist and killer,” he said. “They have no idea how many victims are out there.”

Mindy Duncan Morrison said DNA testing is being used to determine if Stauffer was involved in the killings of two Canadian hitchhikers in Missouri.

When Stauffer was first arrested in California, police found 300-400 photographs he had taken of his victims, according to Mindy Duncan Morrison.

“Whenever he would attack people, after the rapes, he would have the couples perform various acts for him and he would photograph them,” she said.

Those photos were submitted as evidence; however, she said all those files are now missing.

“Bad Moon Rising,” goes beyond what happened to Mike Morrison and Debra Means. The book dives into Morrison family history in relation to how family members dealt with the tragedy, how the community rallied behind the family, what went wrong during the investigation, how the legal system let them down and the traits of a psychopath.

Ed Morrison said he waited until he was mentally prepared to write down the gruesome details of the murders. But even 50 years later, he still struggled.

“There were times I wanted to quit,” he said. “I was tired of revisiting the murder every single day. I couldn’t have written it without [his wife].”

“Bad Moon Rising,” printed by Archway Publishing, a self-publishing branch of Simon & Schuster, is available on Amazon and online at other major book retailers.

A book discussion and signing will take place starting at 4 p.m. on Aug. 17 at Bluestone Vineyard in Bridgewater. The book is also available at the Barnes & Noble on Burgess Road.