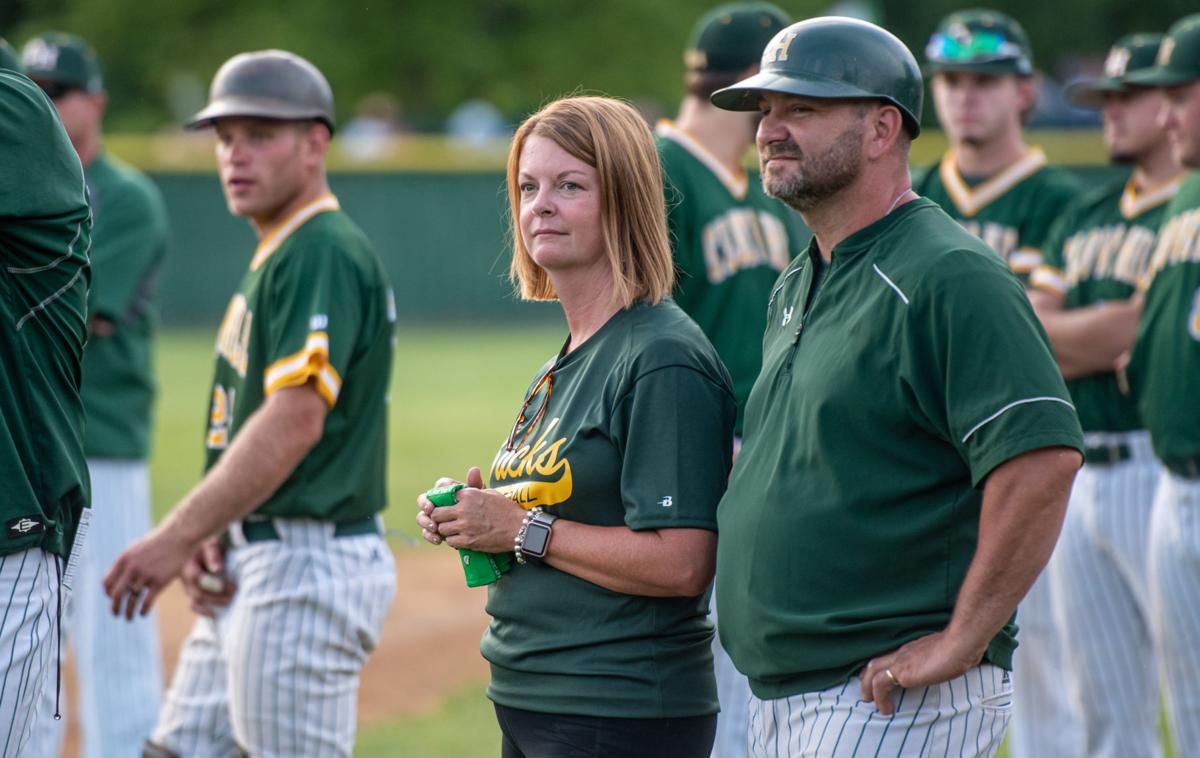 Whitney Cofer, widow of Clover Hill head coach Chris Cofer, watches from the dugout during a memorial ceremony for her husband before the start of the game on Saturday at Buck Bowman Park. 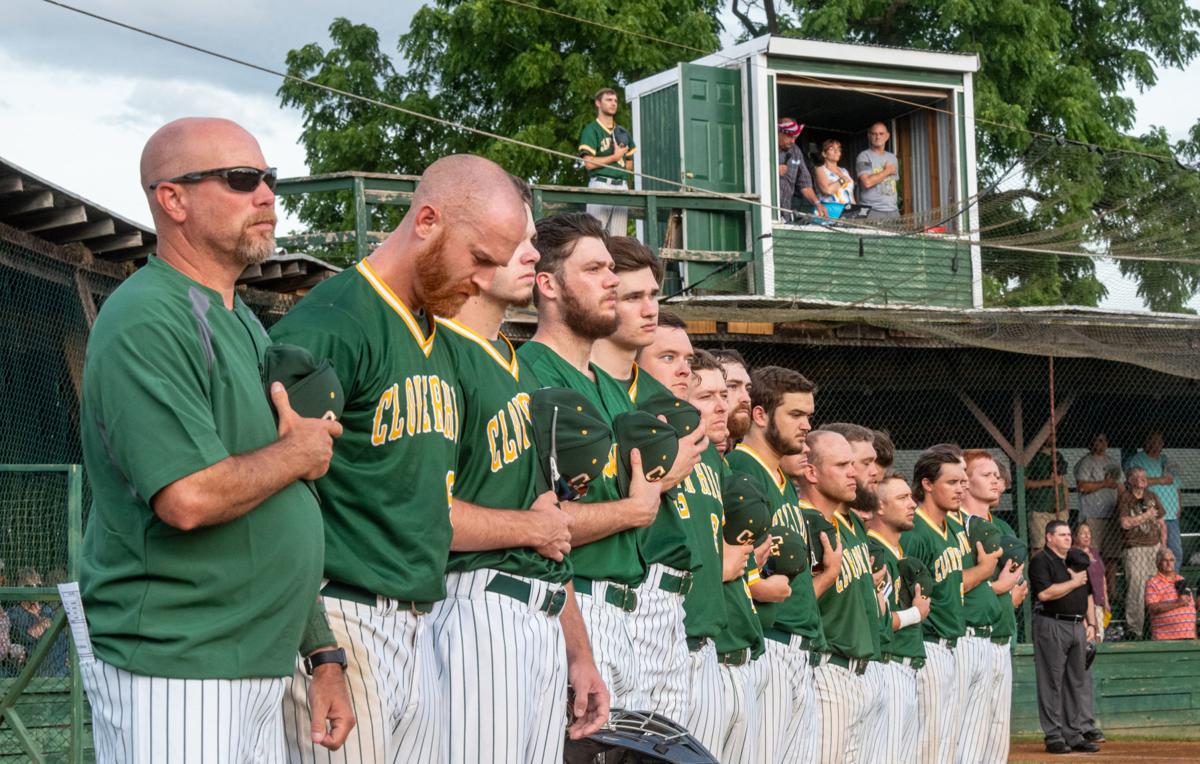 The Clover Hill Bucks line up for the national anthem before the start of their season opener against the Broadway Bruins.

Whitney Cofer, widow of Clover Hill head coach Chris Cofer, watches from the dugout during a memorial ceremony for her husband before the start of the game on Saturday at Buck Bowman Park.

The Clover Hill Bucks line up for the national anthem before the start of their season opener against the Broadway Bruins.

Standing a few feet behind the home dugout at Buck Bowman Park, there were moments where a smile came across Whitney Cofer’s face as she was greeted by fans, players and coaches from the Clover Hill community continuously.

Those moments, she said, felt normal. That moment when the scent of a fresh hot dog from the concessions filled the air, when Bucks outfielders Blake Sipe and Drew Easter played catch in the outfield or when the outfield wall quickly filled up with truck beds full of coolers and folks ready to watch baseball — that’s what Whitney Cofer said brought her back to the place she calls “home.”

“In a way, it’s been good,” Cofer said. “It’s been a good weird. Everything is different, but everything has been the same when it comes to baseball, and that’s been really good to see.”

Cofer is the widow of former Clover Hill player and coach Chris Cofer, who died in early May. The passing rocked the tight-knit Bucks community, and although words are still hard to come by for some, gathering together at a place where the couple had spent so much time was the perfect therapy for all.

“It was really tough, man,” Sipe said. “That’s the only thing we were thinking about, for the most part. We’ve never dealt with this, so we’ll learn to deal with it as we go. I think if there’s any healing, it’s going to come from playing baseball and being on the field.”

Although there was plenty of excitement around the simple fact that baseball was back in the Shenandoah Valley on Saturday, the Rockingham County Baseball League opener between the Bucks and Broadway felt bigger than the sport in front of a packed house at Buck Bowman Park.

Fans lined along the first and third base lines and the bleachers behind home plate were filled to the brim. Whether it be a 54-second moment of silence, wrist bands and T-shirts with Chris Cofer’s No. 10 or the songs playing between each inning that Cofer’s daughters picked out, the entire night was dedicated to the memory of a guy the Clover Hill community had embraced as one of its own.

“It felt really weird,” Bucks first-year coach Kevin Chandler said. “It was different, but it was good. It was good to honor him and do all of those things. [Cofer] would want us to just play baseball. So that’s the best way we can honor him — to go out and play hard. My quote on our lineup card today was about strength in numbers. I was just saying that our strength is in our family, our community and wrapping our arms around Whitney. That is what’s going to carry us through.”

While the Clover Hill players have physically wrapped their arms around Whitney Cofer in recent months, they did so emotionally with their play on Saturday. After falling in a 3-0 hole early, the emotional Bucks used many of their former coach’s philosophies to come back for a thrilling 6-4 win.

It was the type of victory that left players with tears in their eyes as they spoke after the game and left everyone in the ball park remembering just how much Chris Cofer brought to both the dugout and the community as a whole.

“It’s awesome, man,” veteran Tyler Bocock said. “The way we come together and support each other, no matter what we’re going through, it’s amazing. I know we’ll continue to be there for Whitney. It’s good to have a family like this. It’s just really cool that we get to share baseball together.”

Whitney Cofer said she arrives at Buck Bowman Park around 5 p.m. — two and a half hours before first pitch — on game day. She did that for 23 years with Chris, whom she would have celebrated 21 years of marriage with on May 22, and said there’s no plan to change that anytime soon.

For her, the players who don the green and gold each night and have become the most successful team in the RCBL are more than a position on the field. In fact, she said they’ve become an extension of her family.

Perhaps that’s where Whitney Cofer has found the undeniable strength she’s shown since her husband’s passing. From the start, she’s stayed steady and consistent while leaning on the support from the Clover Hill community.

“My husband told me every day of our relationship that I was the strongest person he knew,” Cofer said. “Part of that is just my makeup. It’s how I’m built. I say I don’t have a choice, but I do have a choice. I choose to give my girls an example and also these guys out here. They’re looking to us to see how we respond. How you answer something like this makes a statement. I want to make the right one. You have to keep pushing forward.”

After the pregame ceremony, one that was raw and emotional for most involved, Whitney Cofer settled into her seat and watched as the Bucks opened their season with a thrilling win. Following the game, she was seen near the dugout talking to players and coaches with a smile on her face.

For her, spending her summer evenings at Buck Bowman Park are what brings that smile her face. And seeing the Bucks honor her late husband both on and off the field this season, she said, is why she’ll continue that tradition.

“We don’t want to be anywhere else,” Cofer said. “This is our family. I knew before anything happened that Chris was going to step aside from coaching this year. I was worried about that and if it’d be weird for us to be out here without him. It is, but we’re not going anywhere. This is home.”