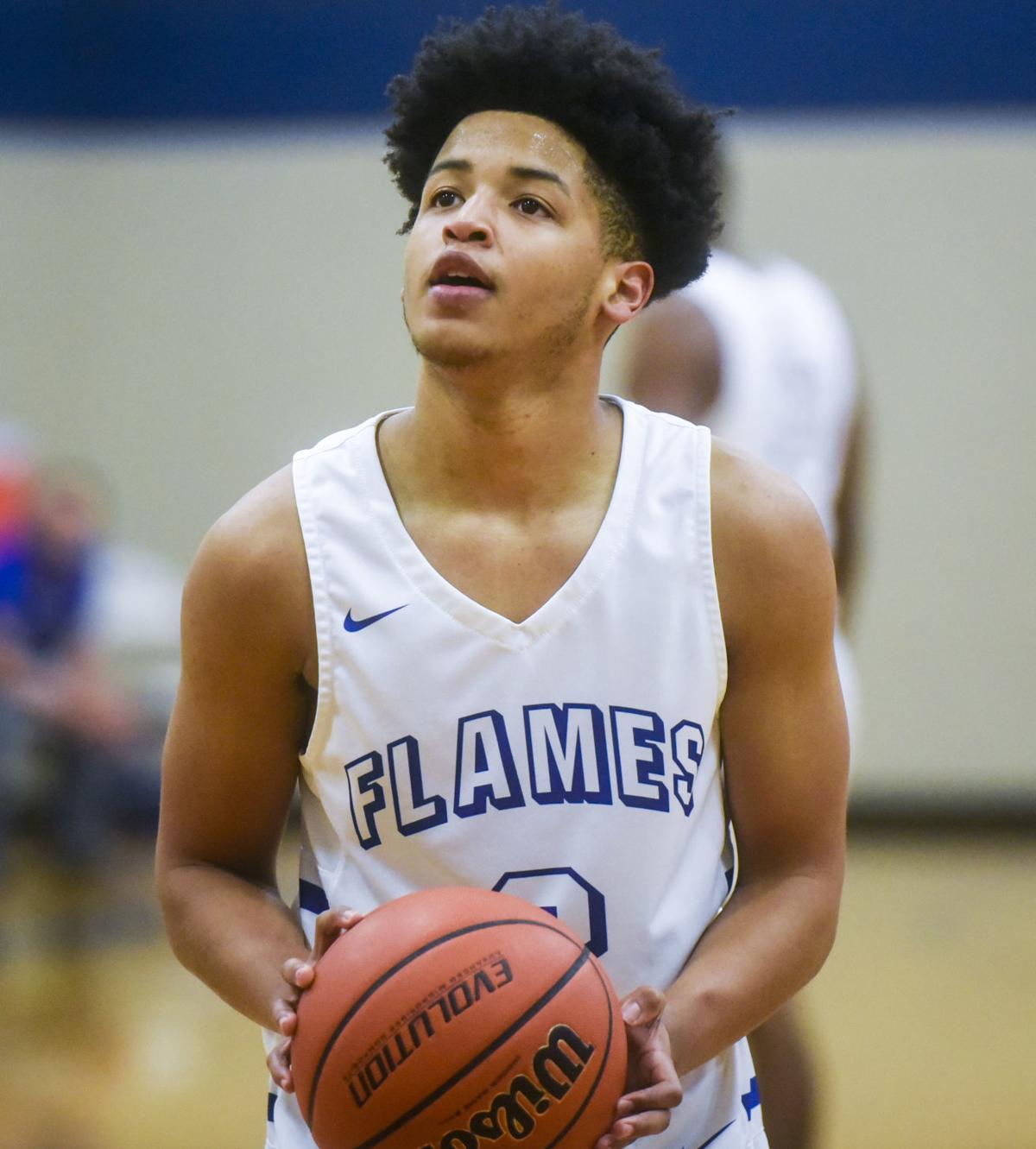 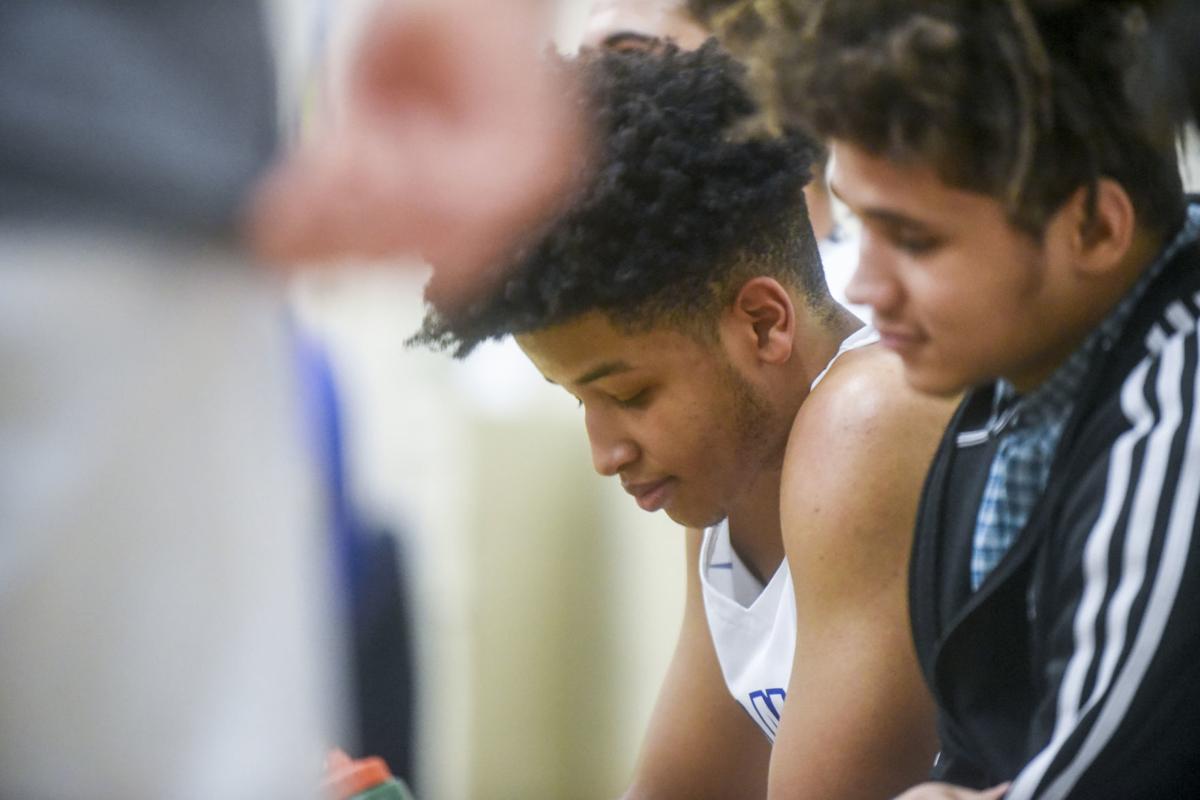 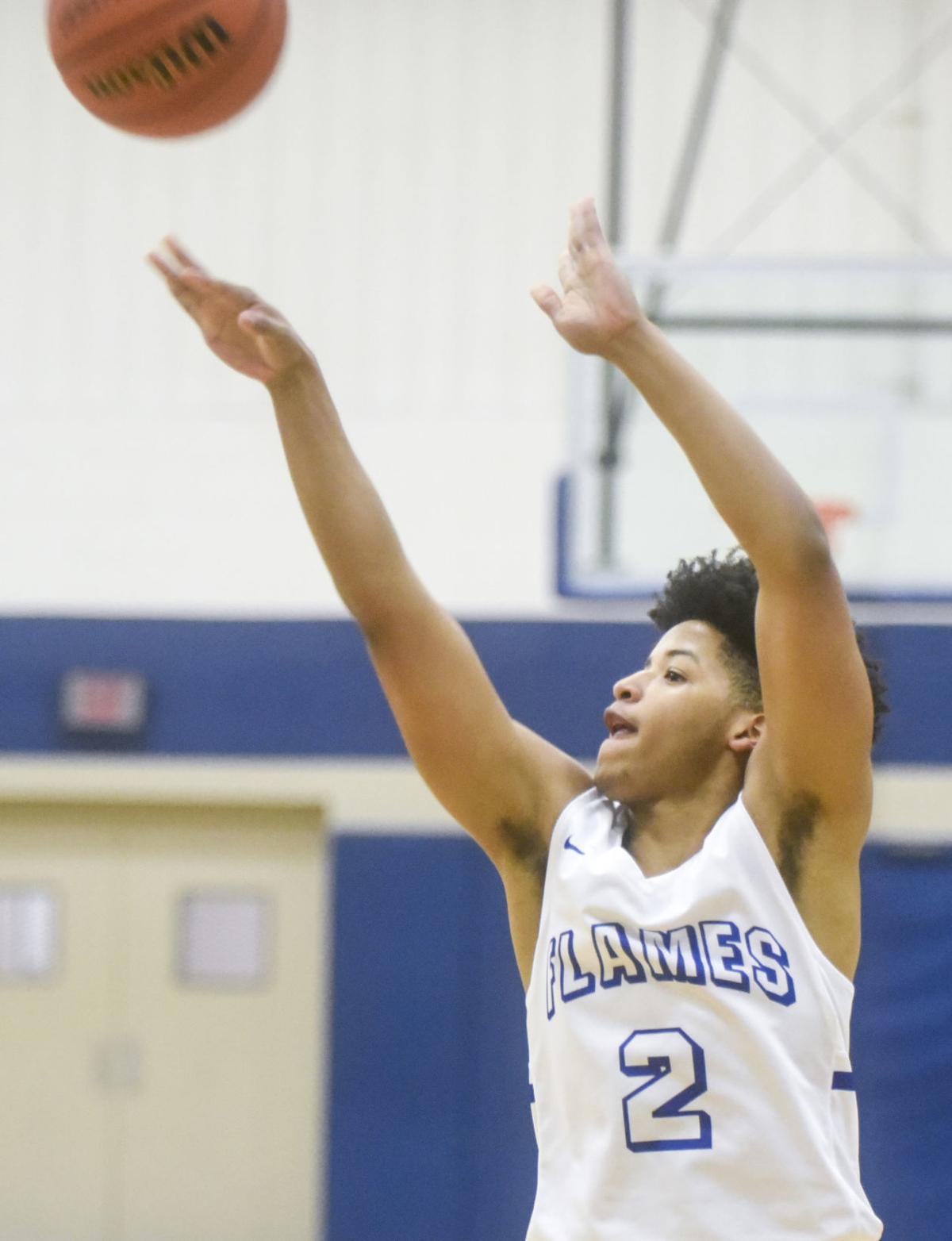 Sean Cardoza tried to stay straight-faced as he stood at the scorer’s table waiting to check-in. But the louder the Eastern Mennonite crowd roared, the more his smile widened.

Cardoza, who transferred to EMHS this past summer after playing three years at Waynesboro High, returned to the court Thursday against Fishburne Military.

The return came less than five months since having surgery in September to repair a torn Achilles that he suffered during a pickup game last May.

At the time of the injury, Cardoza said he was excited about starting a new journey with the Flames. He averaged 8.7 points, 3.1 rebounds and 2.9 assists per game at WHS.

So when he went down with the injury and was forced to have surgery that doctors said would force him to miss the entire 2019-20 season, he called it a "tough pill to swallow."

“It was very devastating,” Cardoza said. “At one point in the process, I didn’t even feel like coming to school. To not even get to do what I love to do was tough. But I got over it. I started working hard, doing physical therapy. It got me where I am right now.”

With Cardoza and senior forward Ethan Vest — a transfer from Staunton High School — both believed to be sidelined for the season before the year even began, Eastern Mennonite coach Chad Seibert admitted that it was a challenging time for both players and coaches to help comfort the two.

“It takes a village,” Seibert said. “It was all of us. He spent an amazing amount of time on the side with [assistant] coach Eli [Crawford] during his comeback. That’s really what Eli has been doing. We were keeping him invested in things emotionally. He was able to grow spiritually and mentally within the game. There’s silver linings along the way.”

Aviwe Mahlong, who came to Eastern Mennonite prior to last season from South Africa, said he has grown closer with Cardoza off the court throughout his rehab process.

“For me, I just tried to invite him over to the house a lot,” Mahlong said. “He’s basically like my roommate at the house right now. He’s like the brother I’ve never had. It’s really been nice having him around and trying to lift up his spirits. That’s been great.”

Returning to the court this season was once an unlikely thought for Cardoza, he said.

He said he had no intention of playing this season, but the school’s athletic trainer started to notice significant progress in recent weeks that gave him hope. He performed a couple of tests on Thursday and was then approved to play in the game that night.

“It felt good, especially because I didn’t think I was going to play for the whole season,” Cardoza said. “I wasn’t supposed to come back until March, but therapy was going good. They said my leg looked strong. My left leg is now as strong as my right. We tried to start building up stamina and when he saw I was good, I got to come back early.”

Cardoza checked in with 4:00 minutes remaining in the first quarter to a loud ovation from the EMHS home crowd. He scored his first points on a free throw with 5:18 remaining in the second quarter and finished with five total points in his season debut.

“It was really cool because he puts a lot of effort and a lot of time into our team,” Flames guard Chance Church said of Cardoza's return. “It was good to finally see it pay off and get him back on the floor tonight. It’s a big asset. It’s another guard. We have a team full of guards, but that’s how we play. That’s how we adapted to play. I think he’s going to be a really big help.”

Eastern Mennonite has dealt with an absurd amount of injuries to its roster this year.

Both Vest and Cardoza were ruled out for the year originally. Trey Gillenwater, the team’s starting point guard, has missed the last two games with a shoulder injury. Nick Jones has missed multiple games. Assistant coach Crawford even suffered a torn Achilles a week ago and has missed the past two games trying to recover from it.

Despite those injuries, the Flames haven’t missed a beat on the court so far.

They sit at 12-1 overall after an 84-40 win over the Caissons on Thursday and are perfect in Virginia Independent Conference play.

“We just have a lot of heart and we trust each other,” Church said. “We let all the work we put in during practice pay off in games. I feel like we’re doing a good job of that.”

Cardoza noted that he definitely has to shake off some rust after being away from the game for so long.

“I could definitely tell with my stamina,” Cardoza said. “On layups, I didn’t really want to jump because I didn’t want to land wrong. I’ll ease into it and get comfortable as we go along.”

His on-the-court performance isn’t what mattered to Seibert, however, as he boasted about how proud he was to see the junior guard return from such difficult times.

He said both Cardoza and Vest deserve credit for how they’ve handled their injuries and that they've grown as people off the court.

“The criticism is that they only came here for basketball,” Seibert said. “Neither of those guys, up until tonight, have played a minute this season. They’re both doing better than they’ve ever done in their whole life. From the classroom, off the floor, just mental well-being. They’re making contributions to the school in a lot of ways.”

Those off-the-court activities are what have also allowed Cardoza to make it through the difficulty of a potential season-ending injury and now make a surprisingly early return, he said.

It’s also why, as the Eastern Mennonite home crowd beamed with smiles in celebration of his return, he just couldn’t help but flash one of his own as he stepped back on the court.

“It’s special to be back,” he said. “We have a good chance to do something great. I really hope we do.”