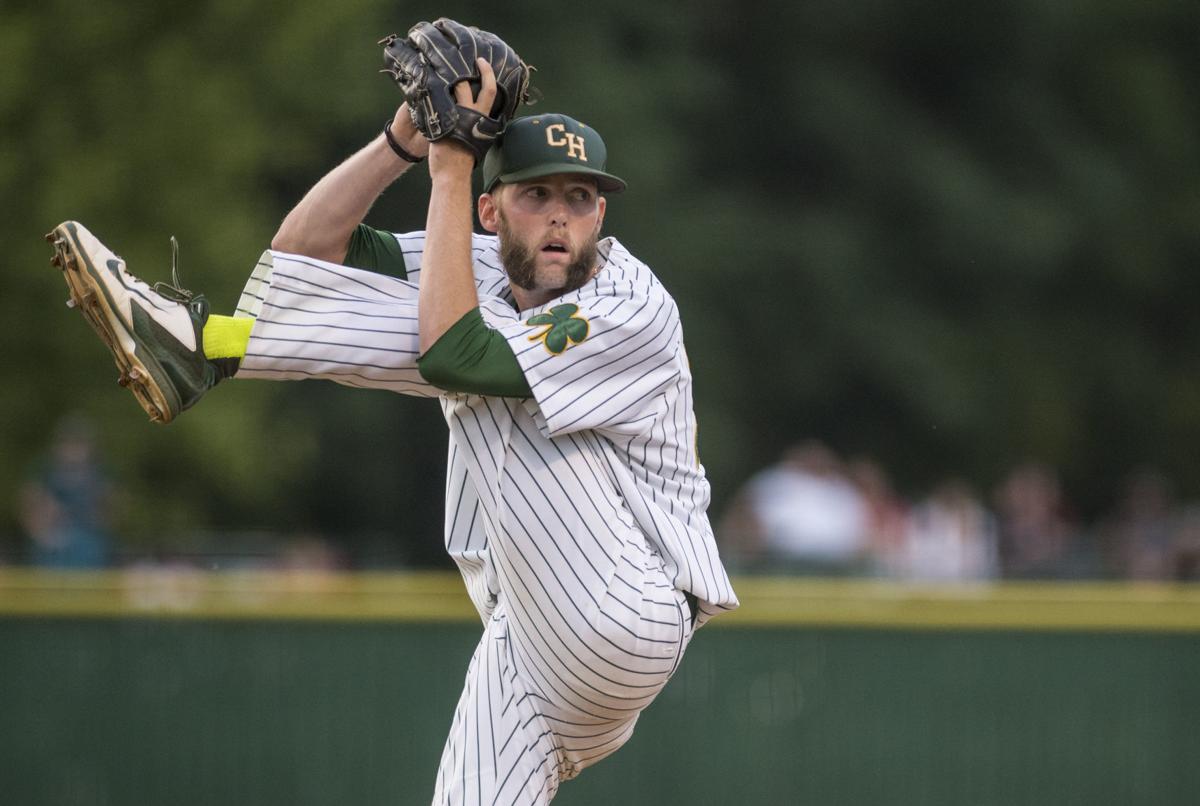 Clover Hill’s Kevin Chandler winds up a pitch against New Market during a game in 2017. 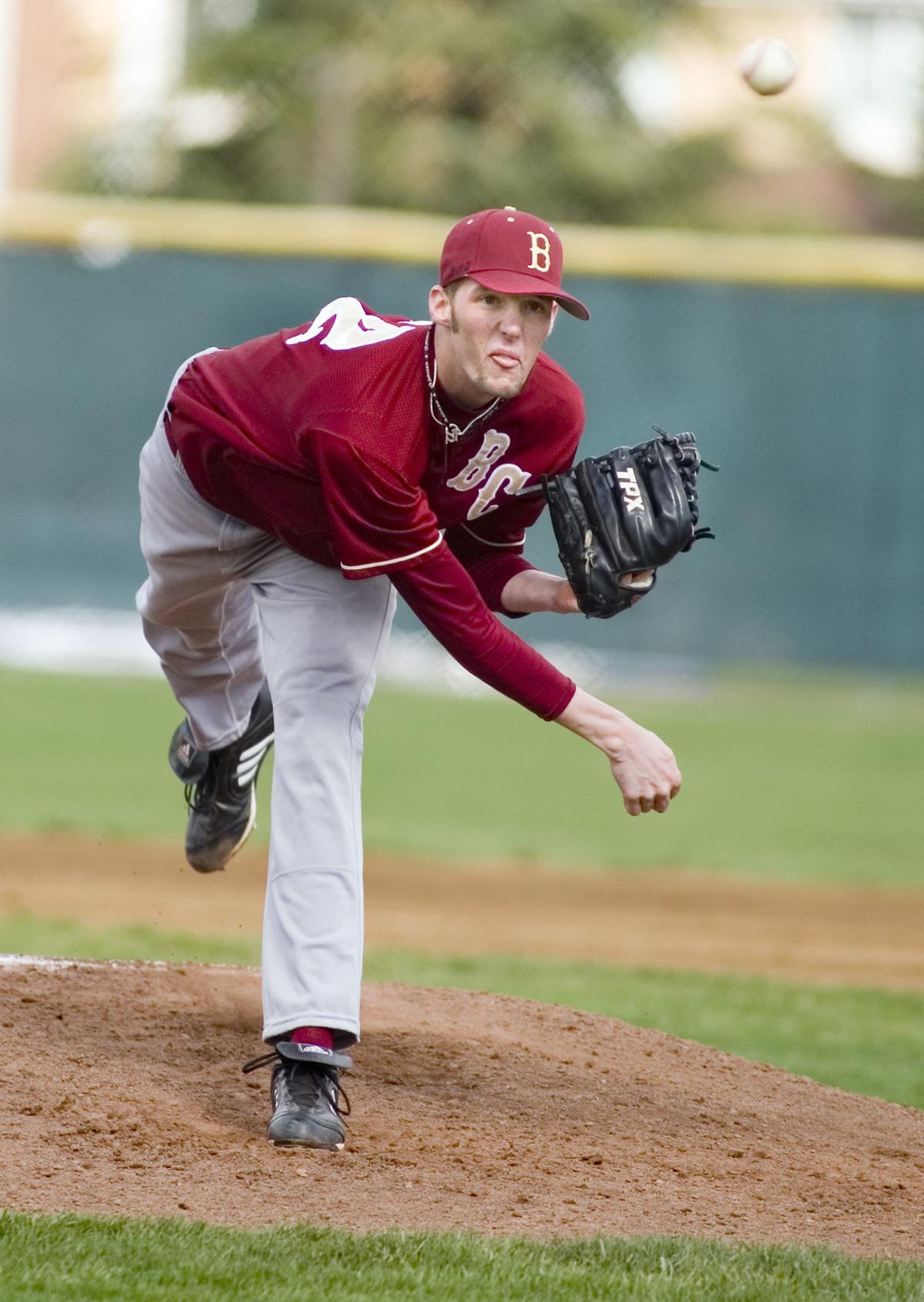 Bridgewater starting pitcher Kevin Chandler fires a pitch against Eastern Mennonite during a game in 2010. 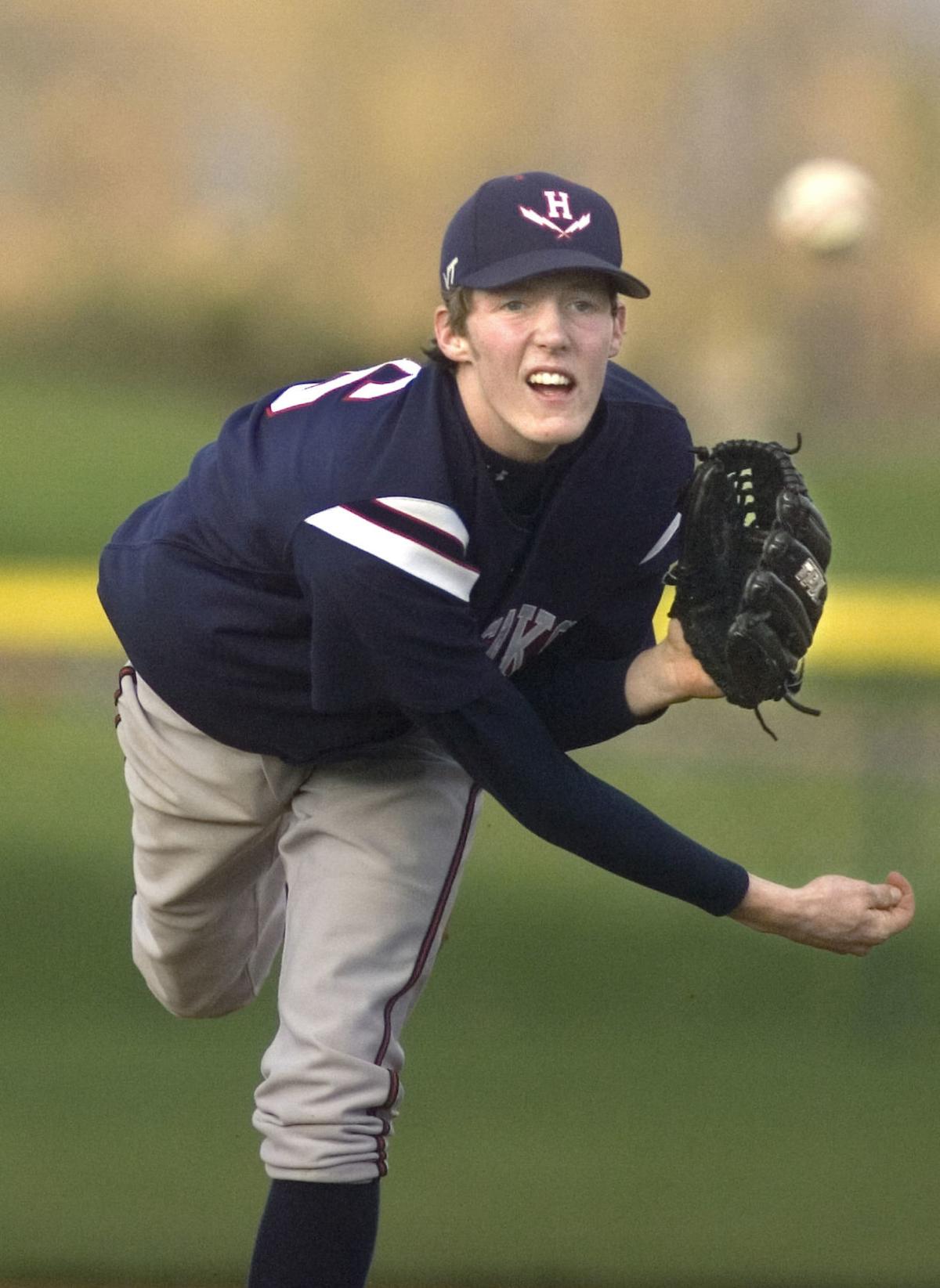 Harrisonburg’s Kevin Chandler fires a pitch in the second inning against Turner Ashby during a game in 2007.

Clover Hill’s Kevin Chandler winds up a pitch against New Market during a game in 2017.

Bridgewater starting pitcher Kevin Chandler fires a pitch against Eastern Mennonite during a game in 2010.

Harrisonburg’s Kevin Chandler fires a pitch in the second inning against Turner Ashby during a game in 2007.

When Chris Cofer took over as head coach of Rockingham County Baseball League powerhouse Clover Hill in 2015, he was replacing longtime coach Mike Martin and was able to bring back an array of talented veterans in his first season.

Kevin Chandler, who began playing for the Bucks as a junior out of Harrisonburg High School in 2007, watched as Cofer evolved from the team’s consistent second baseman to the lead guy. He called the switch a “smooth transition.”

Now, Clover Hill will go through a similar change this year after Chandler confirmed to the Daily News-Record that he’s been named the team’s new head coach — replacing the late Cofer, who passed away earlier this month.

“I’m sure there will be challenges but to be honest, it won’t really change because I’ve played with these guys for a while,” Chandler said of his new role. “Really, for me, it’s about going out there and letting them play.”

Chandler has played for the Bucks every season since 2007 — besides 2011, when he spent time in the Valley Baseball League. He won four straight titles from 2007-2010 alongside Cofer as a player, then won two more in 2015 and 2019 with his former teammate in the role as head coach.

Now, he’s thrown into that same position. Chandler has excelled as one of the team’s primary starting pitchers over the years and was a poster child for consistency. After dealing with multiple injuries in recent seasons, however, he said he’s now ready to switch his attention to solely coaching the Bucks and helping them chase another RCBL title this summer.

“I was already on the fence about the summer to begin with,” Chandler said about pitching. “[My arm has] seen a lot of days. With everything now, I probably won’t play and with the expanded roster, the only reason I would have to play is if no one showed up and hopefully that doesn’t happen.”

After a standout career with the Blue Streaks, where he was one of the top pitchers in the Valley District from 2006-2008, Chandler went on to play at Bridgewater College under former coach Curt Kendall and assistant Ben Spotts. Kendall is now the athletic director at BC while Spotts is the Eagles head coach.

Spotts, who spent time as the Eastern Mennonite head coach before coming back to Bridgewater, hired Chandler as an assistant for a short time after he graduated from BC. Chandler said his time with both Spotts and Cofer gave him the groundwork to build upon as he becomes a head coach for the first time.

“He was one step ahead mentally,” Chandler said “I learned that from [Cofer] and Coach Spotts. The other thing is [Cofer] enjoyed being at the park. Whatever happened that day with work and life, he didn’t take it with him. Once he was there, he just enjoyed it. You get to be on a baseball field, whether you’re coaching or playing. That kind of rubbed off on us — just the enjoyment of it. When you’re having fun and enjoying it, you play more free.”

The unique way Cofer let his players stay loose when at the field was something Chandler said he hopes to replicates with a number of key veterans coming back. After years of playing alongside most of the current roster, he said he doesn’t anticipate trying to change too much of what’s led the Bucks to become of the most successful teams in RCBL history.

“It’ll make it real smooth,” Chandler said. “I played with Chris when I first started and when he became the manager, it was really easy. He made it real smooth, nothing changed. When you have all these changes going on, the more you can keep it the same around the guys, it’s an easier transition for them. I think they’ll be fine and I’m just looking forward to watching them do their thing as they always have been.”

There certainly will be plenty of talent for Chandler to choose from. Former league MVPs Tyler Bocock and Blake Sipe, along with veterans John Siciliano, Ross French, Drew Easter, and Corey Armentrout, are all expected to return. Toss in high school standouts and James Madison commits Grant Painter (Riverheads) and Bryce Suters (Broadway), and Clover Hill looks poised to be in contention for a league-record 19th RCBL title in 2020.

“Kev is a great baseball mind with years of local experience and knowledge,” Bocock said. “He has learned from some of the best coaches in the Valley. I’m excited to play for him.”

The RCBL is a unique league and one of the oldest in the country. It was founded in 1924 and has seen Clover Hill win 10 titles since 2003. The Bucks won last year’s best-of-seven championship series with a 4-2 win over rival Bridgewater.

“Kevin has been in the league a good while and knows his players and the rest of the league well,” RCBL commissioner Randy Atkins said. “He has been a leader on the Bucks and will do a fine job managing at Clover Hill.”

Danny Grogg, who is currently the head football coach at Broadway High School, knows what it’s like to transition from player to coach, which he did last summer with the Broadway Bruins. As a former high school teammate of Chandler’s at Harrisonburg and also with Clover Hill, he said he has no doubt that the Bucks found the right guy for the job.

“Chandler is a great hire,” Grogg said. “If there is a guy on that team that would do a great job representing what, who Clover Hill is as a program, it’s Kevin. He’s been there since his playing career started, knows how the team does business, knows about the community and he knows baseball.

“Kevin is a good friend of mine because of how loyal he is to his baseball family. I think if Cofer could have picked a guy, it would have been him. He will represent that program very well. I’m excited for Kevin and what he will have to offer.”

As the Bucks enter a new era with Chandler as the lead man, there’s sure to be a little deja vu around the organization from their last player-to-coach transition in 2015. And for Chandler, he’ll use the lessons he learned from Cofer’s legacy with Clover Hill as he tries to create one of his own.

“They know the game, they’re veterans and we have some good young guys that will find a way to fall in and follow those leaders,” Chandler said “Really, it’s just me kind of letting them play and staying out of the way and enjoying the ride.”