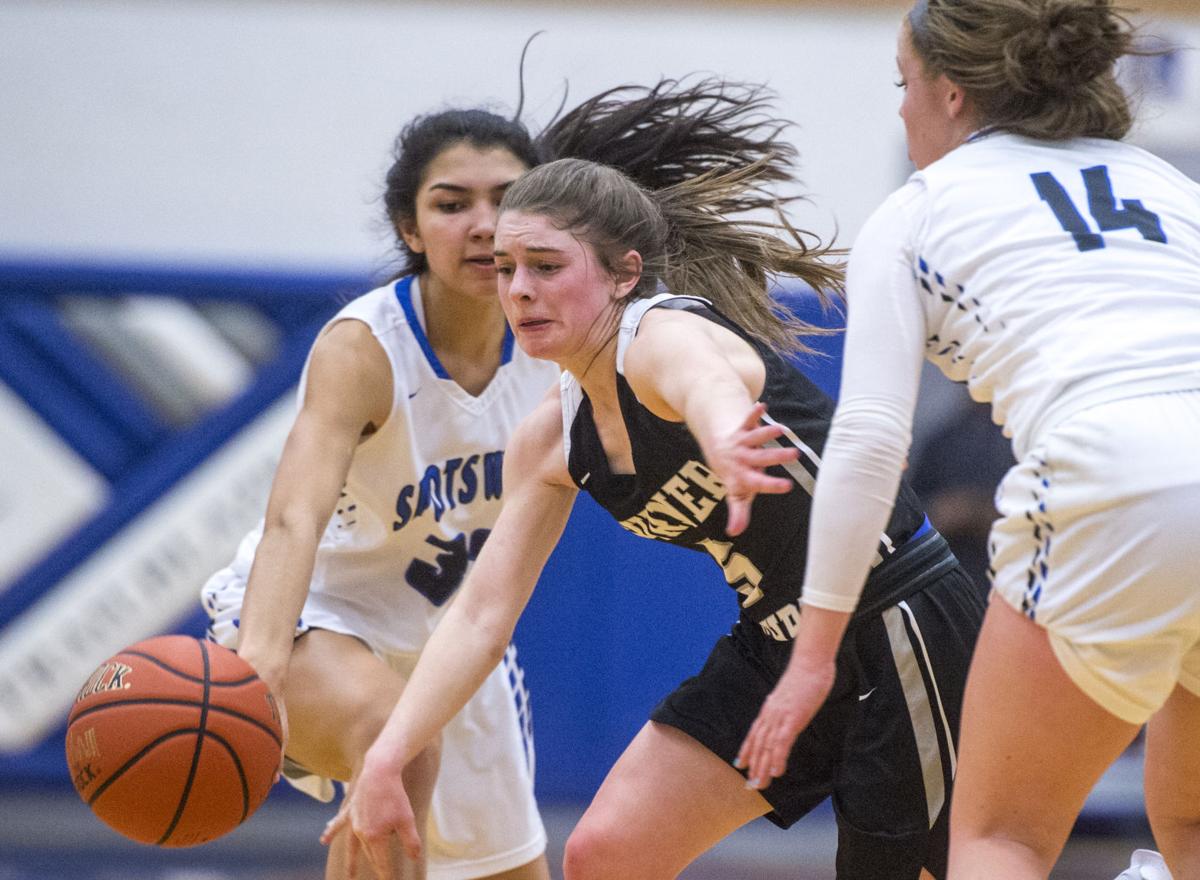 Turner Ashby’s Gracie Moyers loses control of the ball as she drives between Spotswood’s Zoli Khalil, left, and MacKenzie Freeze during a game in February. 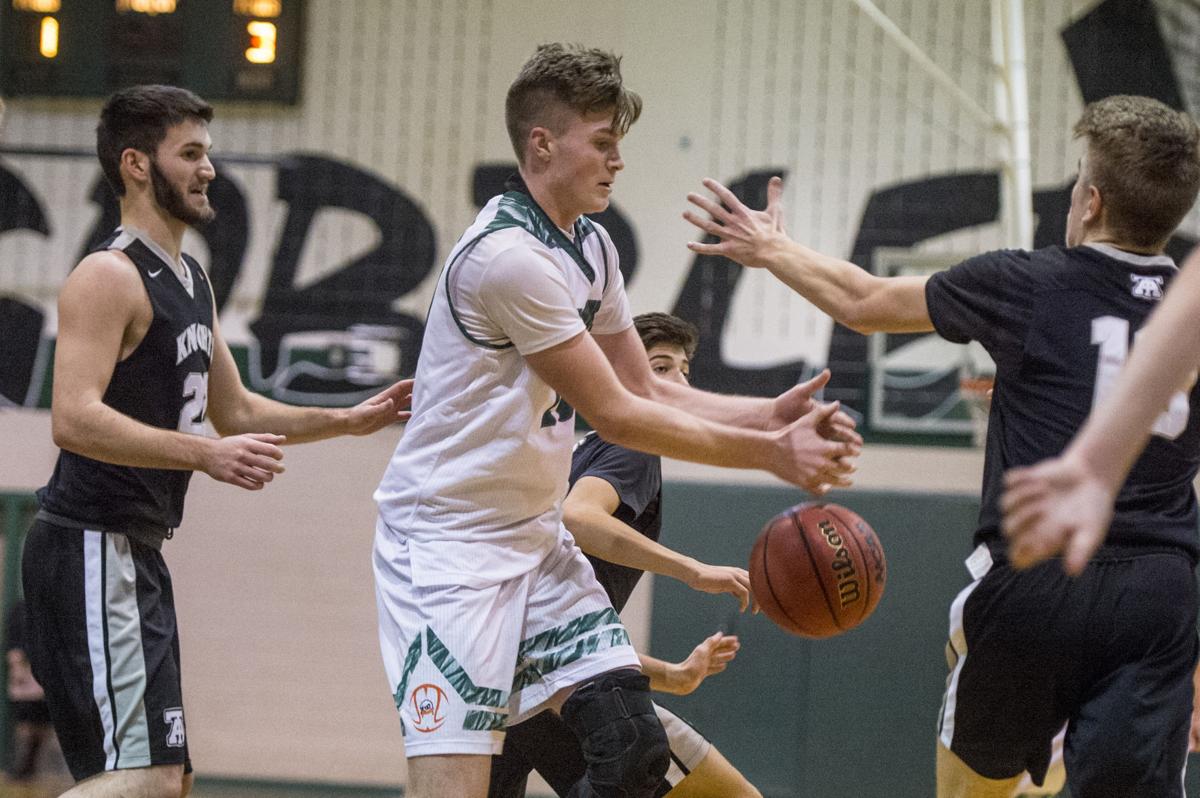 Broadway’s Nate Tinnell tries to corral a rebound as he gets mobbed by the Turner Ashby defense during a game in January. 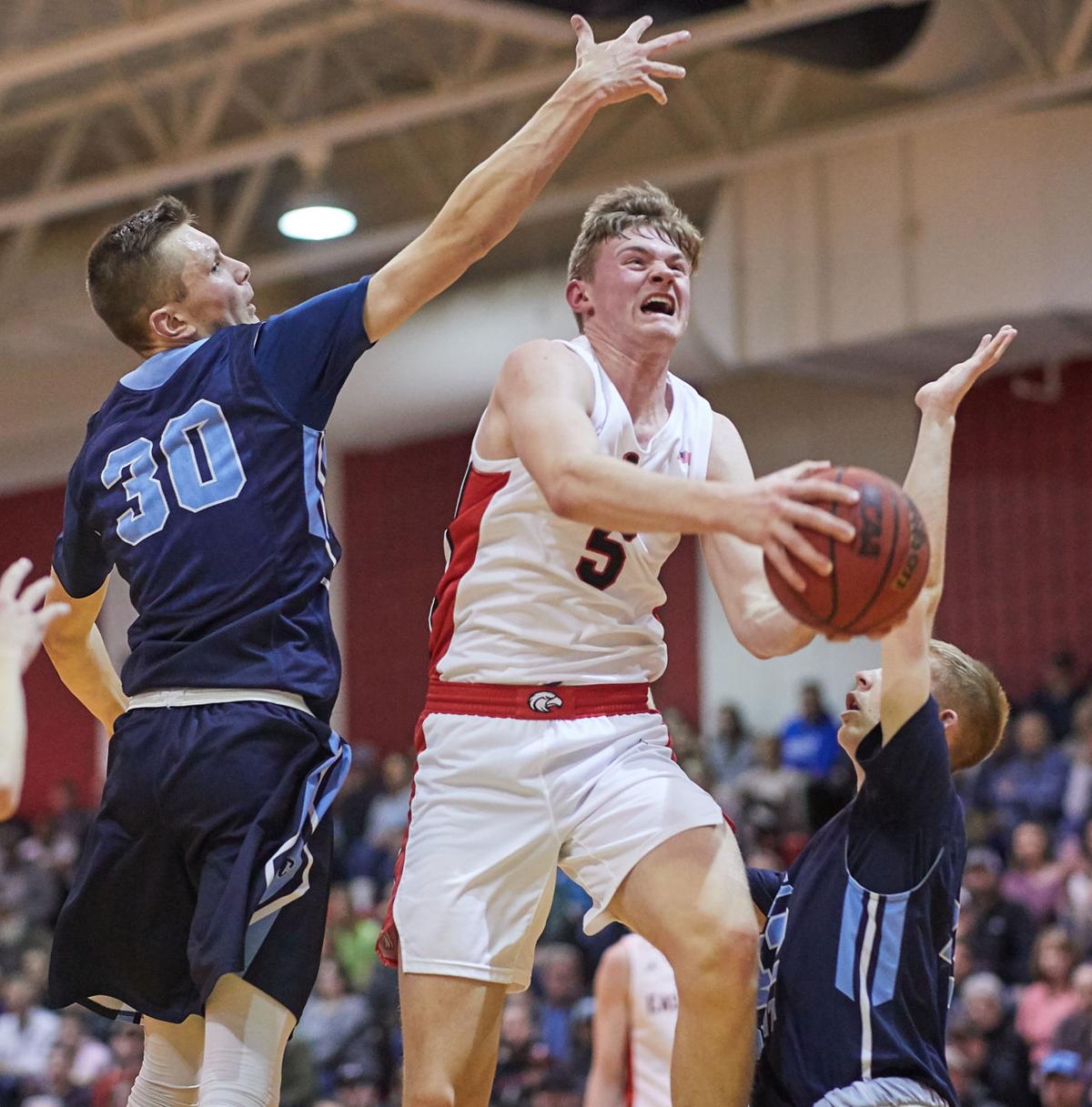 East Rockingham’s Tyler Nickel drives in for a shot past Page County’s Chase Combs (30) during a game in February.

Turner Ashby’s Gracie Moyers loses control of the ball as she drives between Spotswood’s Zoli Khalil, left, and MacKenzie Freeze during a game in February.

Broadway’s Nate Tinnell tries to corral a rebound as he gets mobbed by the Turner Ashby defense during a game in January.

East Rockingham’s Tyler Nickel drives in for a shot past Page County’s Chase Combs (30) during a game in February.

Since the Virginia High School League was forced to cancel the Class 1, 3, 4, 5 and 6 boys and girls basketball state championships in March due to COVID-19, there’s been so much uncertainty about when prep athletics will return.

The VHSL was forced, just a few weeks later, to cancel the entire spring sports season — a move that eliminated the final opportunity for thousands of senior athletes across the state to play the sport they love one final time.

Then, as the coronavirus numbers continued to surge into the fall, the league announced its “Championships +1” model for the 2020-21 school year that includes a condensed schedule, but championships in every sport.

That provided teams optimism and a reason for a return to normalcy at some point. But after Harrisonburg City Public Schools announced last week that it’s “unlikely” to participate in the winter sports season and Rockbridge County posted a message on Twitter early Monday indicating they could be forced to make a similar decision, the four city/county schools are left wondering what their own future may look like when Dec. 7 rolls around.

But as coaches have continued to preach the importance of “controlling what we can control,” it’s never been more important than right now with programs less than a week away from their scheduled start.

And for the four city/county public schools, if a season does take place, there’s plenty of reason for excitement for each team.

Despite losing a batch of talented senior leaders in Jaxson Jameson, Ben Alderfer and Caleb Williams, don’t overlook Broadway as a contender once again this year in a Valley District that is suddenly wide open with the loss of the Blue Streaks.

Forward Nate Tinnell, a third-year varsity player that has the potential to play at the next level in multiple sports, will be the unquestioned leader of this squad and brings the type of experience to the varsity level that is pivotal to team success.

Add in point guard Gage Williford, who will be relied upon by head coach Dwight Walton to facilitate the BHS offense, and up-and-coming guard Luke Garber and the Gobblers resemble a deep team that’s symbolic of what they’ve become.

The No. 1 reason that East Rockingham should be excited about the 2020-21 season comes in the form of 6-foot-8 wing Tyler Nickel — a coveted four-star prospect with a high number of Division I offers from all across the country.

But while Nickel’s presence will clearly bring plenty of attention to the Eagles, they’ve become a program that deserves recognition as one of the top in Class 2 after back-to-back appearances in the VHSL state semifinals the past two years.

Whether it by Kyle Evick and Cooper Keyes on the wing or Xavier Butler and Michael Shifflett, a Spotswood transfer, down low, East Rockingham is loaded once again and should be favored to make another deep postseason run.

It’ll be one of the tougher jobs of Chad Edwards’ coaching career, but the veteran coach has proven the ability to rebuild teams quicker at Spotswood than any other city/county program since being hired as the boys basketball coach.

Carmelo Pacheco returns for the Trailblazers and is a high-level prospect that could have a breakout year after earning all-state honors a year ago as a sophomore. The wing has one of the best jumpers in the city/county.

With so many key pieces gone from a year ago, Pacheco will be relied on more than ever and he looked like a player capable of taking on that role a year ago.

The first-year head coach and Knights alum has brought a sense of enthusiasm and stability to a program that has seen quite a bit of change over the past few seasons and struggles that came along with those transitions.

With Shields leading the way and legendary coach John Woodrum on staff as an assistant, the sharpshooting Knights could be a surprise team in the Valley.

Broadway has continued to improve in its two seasons under coach Scott Martin and this may be the year that the Gobblers finally reach their full potential.

Led by senior A.C. Swartz, Aliza Lokey and Emma Bacon, Broadway has a veteran team that has seen its share of ups and downs over recent seasons.

After years of growth as underclassmen, the trio may help put the Gobblers over the hump this season and push for a regional playoff spot for the first time in a while.

It was a rough 2019-20 for Paul Comer and East Rockingham, but the veteran coach has proven that he can rebuild in a hurry during his tenure at ERHS.

Despite winning just three games a year ago, a majority of the Eagles roster is back this season and it’s a unit that showed progress as the season went along.

With several key pieces back, including veteran guard Makenna Siever, look for an improved ERHS squad this year and perhaps a surprise run in the Bull Run.

As the area’s best team for the past two decades, Spotswood is looking to rebuild a bit in 2020-21 but have the talent on this year’s roster to do it quickly again.

Led by Zoli Khalil, a talented sophomore wing with plenty of potential, the Trailblazers are once again favored to be a contender on the state level.

Every year, it seems as if Spotswood enters the season with some question marks after key losses from a year ago. And every year, the Trailblazers respond.

There’s perhaps no team looking forward to the 2020-21 season more than the Turner Ashby girls after a remarkable run to the VHSL Class 3 quarterfinals a year ago.

The Knights bring back their entire roster from a team that lost just five games and feature a senior class that has played together since they were kids.

Led by Addie Riner, Gracie Moyers, Becca Shiflet and Alyssa Swartley along with underclassmen double-double machine Leah Kiracofe, Turner Ashby should come into 2020-21 with a return to the state tournament at the top of its list of goals.