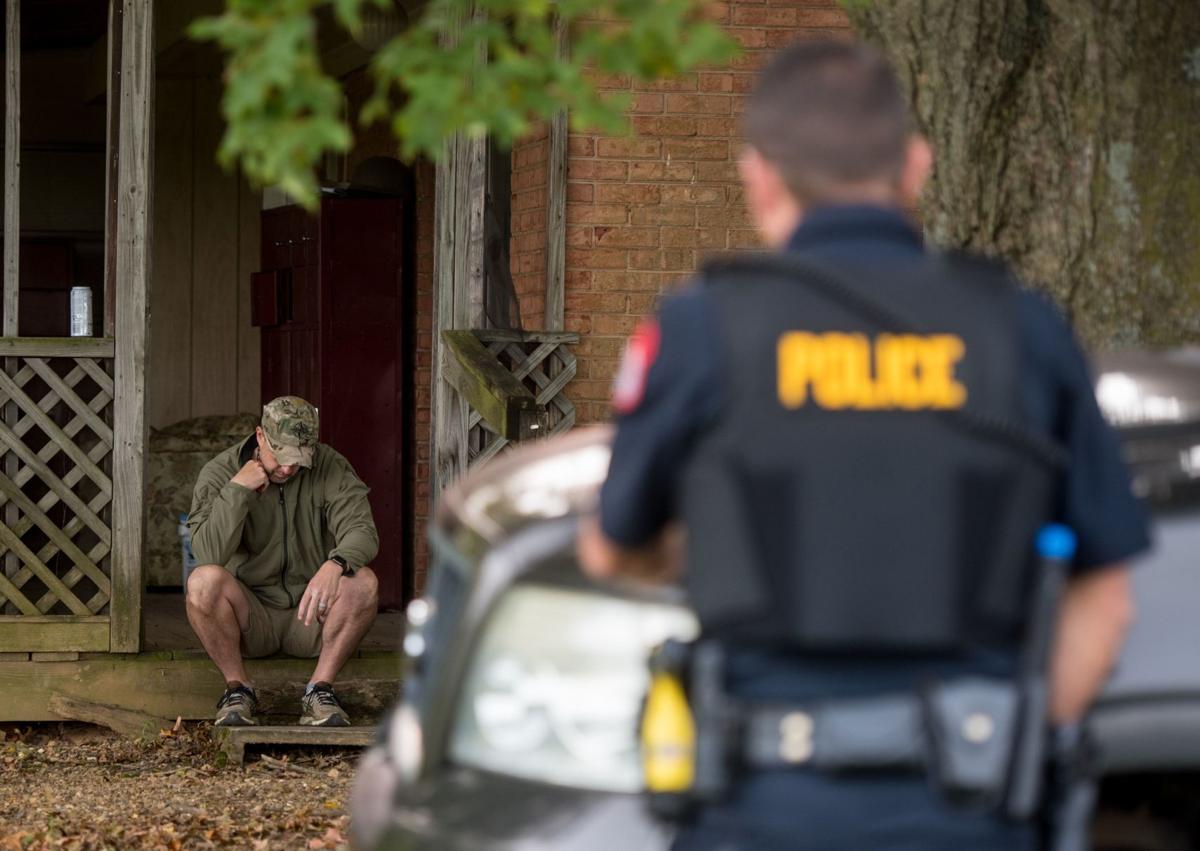 Harrisonburg police training officer Chris Meadows, left, plays the role of a suicidal person during a de-escalation training exercise at the Harper-Presgrave Training Grounds on Greendale Road on Tuesday. 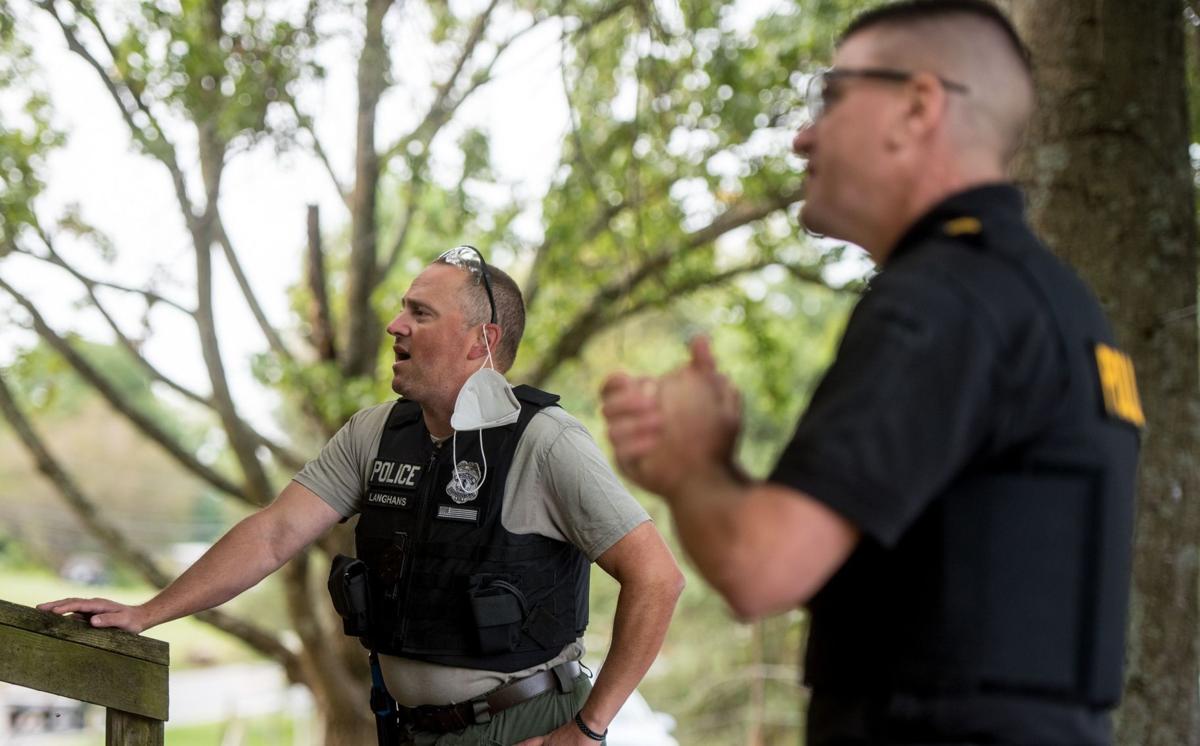 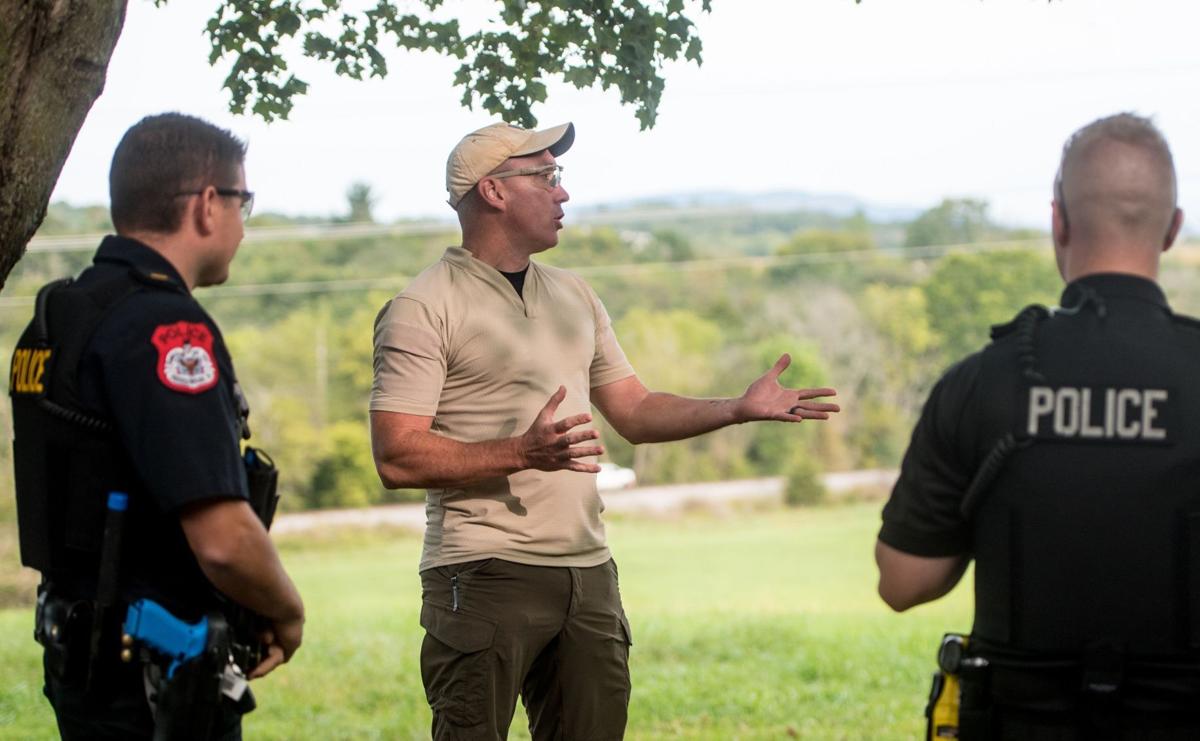 Harrisonburg police training officer Chris Meadows, left, plays the role of a suicidal person during a de-escalation training exercise at the Harper-Presgrave Training Grounds on Greendale Road on Tuesday.

When Harrisonburg police officers arrived at the home on Greendale Road, they found a man sitting inside a screen-in porch holding a pipe and drinking a beer.

Moments before, the man’s wife called police to report her husband returned to their home even though she had obtained an emergency protective order against him.

The officers’ task -- as part of a training scenario Tuesday -- was to bring the man into custody peacefully.

“She’s not kicking me out of my house,” the man, while holding the pipe to his side, told officers as they approached.

One officer responded: “Just step back and put the pipe down and we’ll talk.”

In the next few minutes, the officers made small talk with the man on a variety of subjects, from his military service to the brands of beer he enjoys. Shortly after, he peacefully surrendered.

Sgt. Daniel Claxton of the Harrisonburg Police Department Training Unit said an important step to de-escalate a situation is to quickly form a bond with the person.

In roughly the next month, all city officers will be required to participate in a two-day training program, Integrating Communications, Assessment and Tactics.

“Providing officers with all the resources available in order to safely resolve a situation should be a priority in every law enforcement agency,” Interim Chief Gabriel Camacho said. “ICAT training is focused on protecting officers and all parties involved.”

Nationwide, there has been a call for increased training for police officers following the death of George Floyd and unrelated police-involved shootings of unarmed Black men.

Floyd, a Black man, died May 25 after his neck was pinned under the knee of Minneapolis officer Derek Chauvin. Chauvin has since been fired and is charged with murder. Additional officers have also been charged.

This week’s training, Claxton said, was wasn’t scheduled in response to the nationwide incidents. He said the department is routinely looking to offer training programs for its officers.

The training was geared toward diffusing situations with unarmed people or people with weapons other than guns.

In many cases, he said, these are incidents involving people suffering a mental health crisis.

"Our mental health cases are through the roof. It’s important that law enforcement receive proper training,” he said. “We have to prepare for what we may face on the streets.”

On Monday, Capt. Rod Pollard oversaw the classroom portion of the training.

During the class, the officers viewed a video of a man with a knife standing in the middle of a highway.

When officers arrived, the man pleaded with the officers to kill him.

Pollard told the officers the best strategy is to create space between them and the armed man. Maintaining space creates time for other officers to arrive.

“The more resources you have, the more likely you’ll be able to take the person into custody peacefully,” he said, adding that officers need to be thinking about ways to end the event without anyone being harmed. “There are lots of options that sometimes we don’t think about.”

Regardless of the situation, Pollard said, the most important thing to do is to make sure all lives are protected.