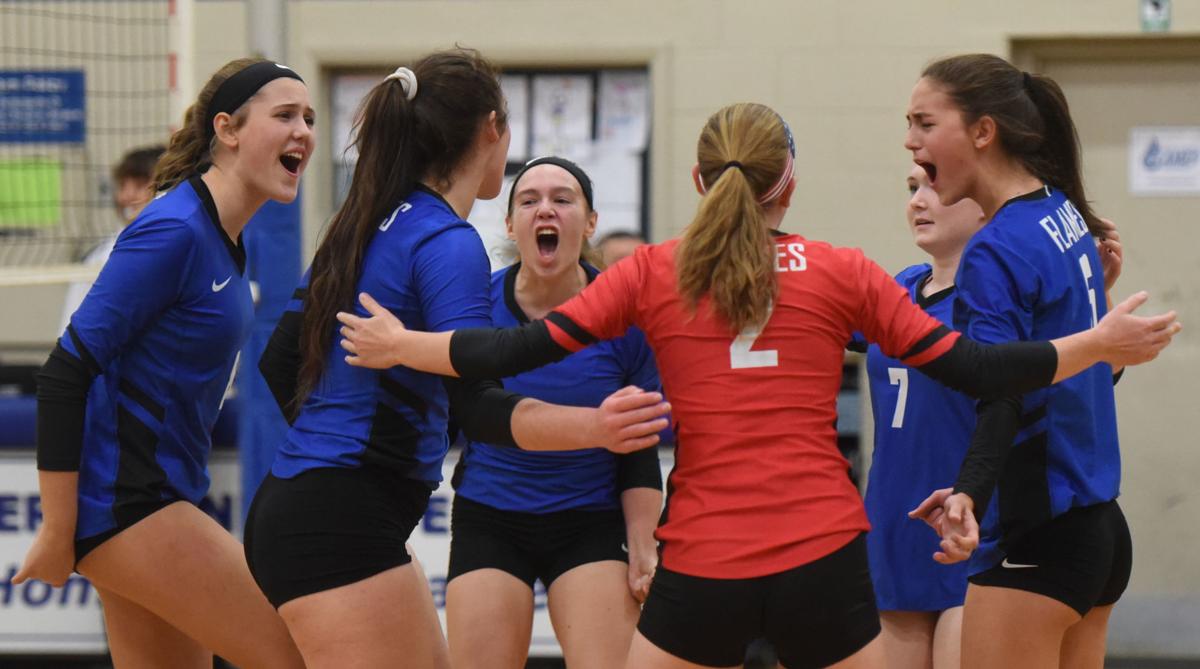 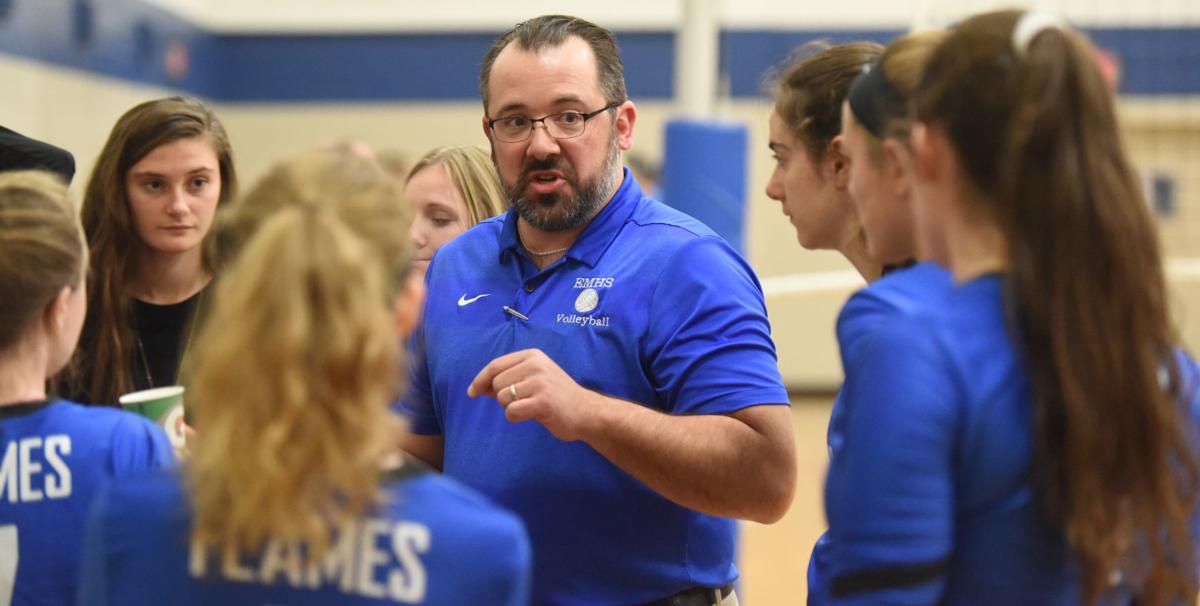 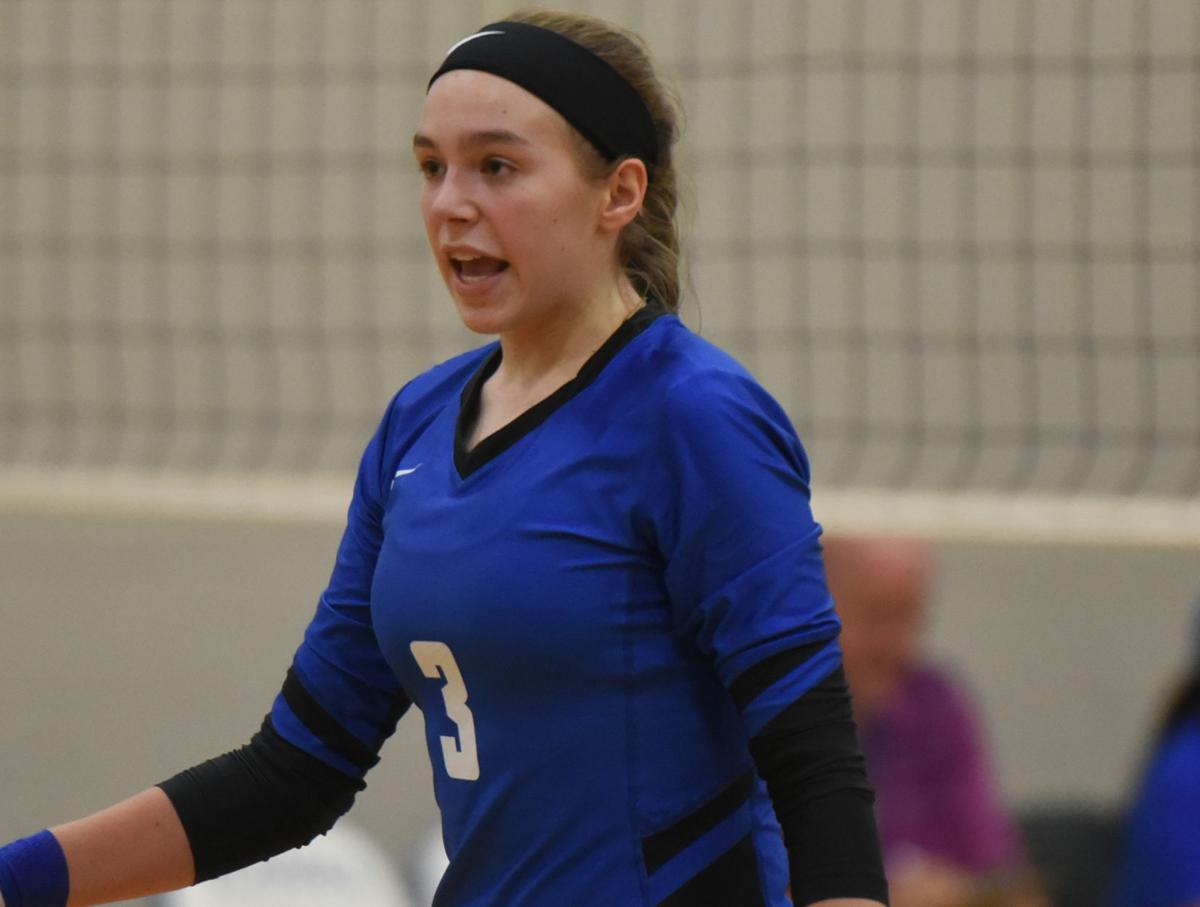 Her teammate, Adrienne Cline, however, had no problem admitting her fear.

“I was panicking,” Cline said with a laugh. “I don’t know about everyone else.”

With the victory, EMHS will advance to the VISAA Division III semifinals for a second straight season to face second-seeded Timberlake Christian School on Friday at 6 p.m. at Roanoke Catholic School. It’ll be the first-ever meeting between the two programs.

“The only thing I can say about them is they’re fighters,” Eastern Mennonite coach Jonathan Williams said. “I mean, my goodness. What a match. Even though we never had that type of competition this year, they always fought through adversity. This was just the greatest adversity they’d ever seen. When your back is up against the wall, which theirs was, you find that energy, find the heart. They found that tonight.”

The first set was a shock to the Flames’ system with the serving Megan James giving GCA an early double-digit lead that was too much for Eastern Mennonite to overcome.

The Flames then blew a nine-point lead in the second set and all of a sudden, after not losing a set in the entire regular season, they found themselves in a two-set deficit.

“We all kind of came together and took a couple of breaths because we were kind of scatterbrained,” Litwiller said. “We just worked together really well. We were flustered. Once we came together as a team and figured out what we could fix, we did that.”

Whatever the EMHS players said to each other worked as the Flames bounced back with a pair of victories in the third and fourth sets to set up a decisive fifth set.

That’s when Cline, a junior captain, hooked up with setter Karla Hostetter to take the game over and deliver a powerful fifth-set performance that clinched the EMHS win.

“It really helps us,” Litwiller said. “I think we’re really going to be able to improve off this game. We have that experience of playing a team that is good. They could have beat us. We are going to use that going into the next round and know what to expect.”

Litwiller, who said earlier this season that she spent the offseason focusing on her serving after being known primarily as a blocker last year, started the fifth set with several strong serves and Cline delivered seven kills in the first nine points for the Flames as they jumped out to a 9-1 lead and were never threatened from there.

“It feels good, for sure,” Litwiller said. “My confidence level is getting boosted a little bit. Last year, I wasn’t as confident with my serving. I’m excited to get back behind the line.”

“From there, it was just finding the hot hitter, which has obviously been Adrienne Cline all year,” Williams said. “She rose to the occasion and she took charge of the match.”

That fifth-set performance was something that Cline called an “indescribable” feeling.

“Oh, my gosh. It feels amazing to know that you’re in a rhythm, see it clicking,” Cline said. “The ball was just everywhere I wanted it to be. It was awesome.”

Cline did what she’s done all year for the Flames and took over in crunch time Wednesday, despite falling in what she called a “panic” early on because of the deficit.

Now, despite those early worries, the senior said her team will be better because of it.

“It shows our persistence,” Cline said. “Coming in, we needed to see that persistence shine through and I think it brought us closer as a team. I think it’ll help us on Friday.”