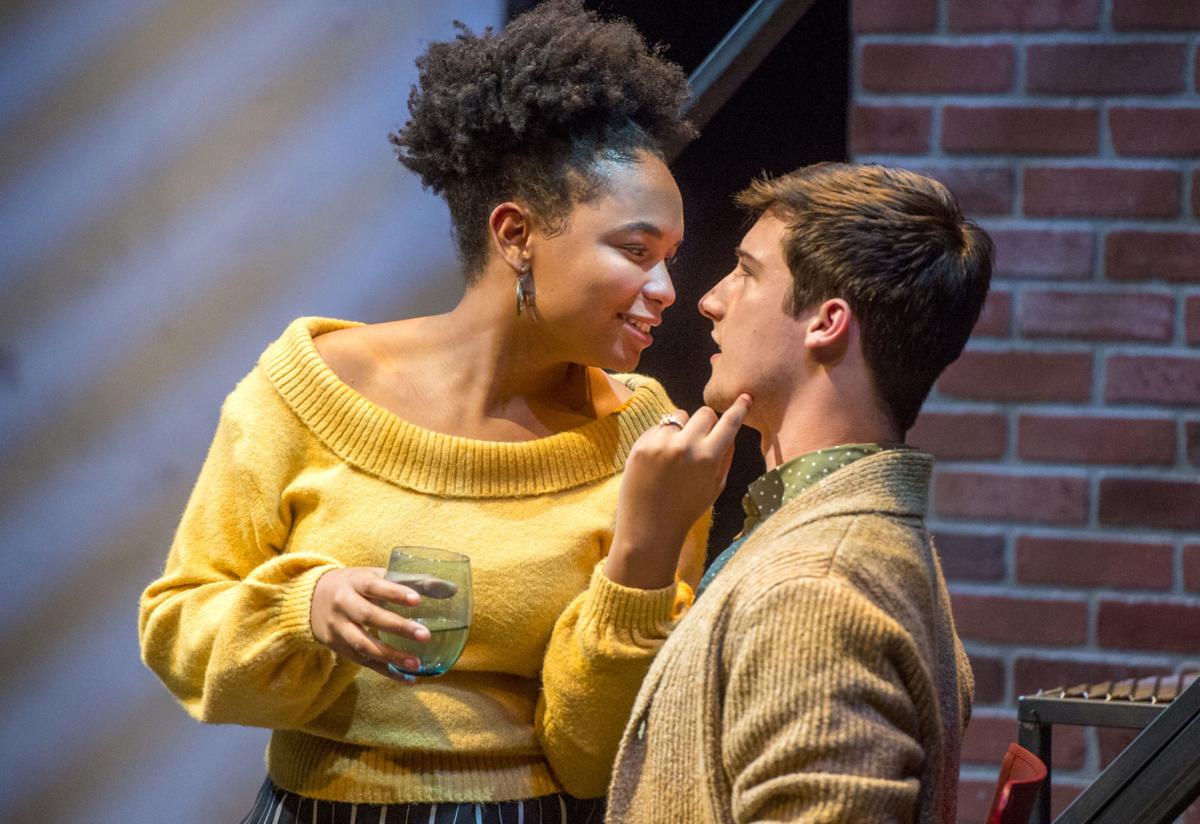 Abigail, played by Sierra Orr, and Carver, played by Carter Crosby, share a moment during a rehearsal of "Walls: An American Story" in the Studio Theater of the Forbes Center for the Performing Arts on Wednesday. 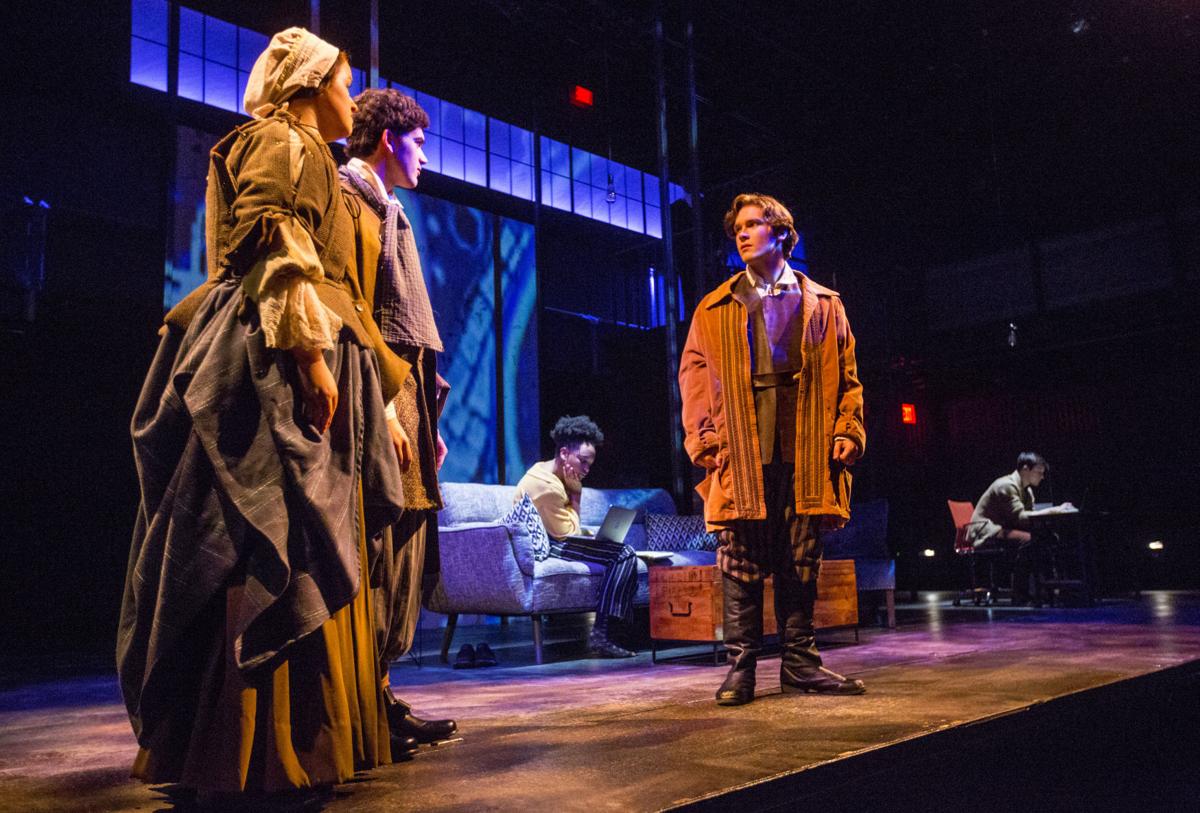 Foreground, left to right, Historical figures played by Abigail Theakston, Michael Fobian and Seth Sager represent modern-day Carver's ancestry and family background during a dress rehearsal of "Walls: An American Story" in the Studio Theater of the Forbes Center for the Performing Arts on Wednesday. 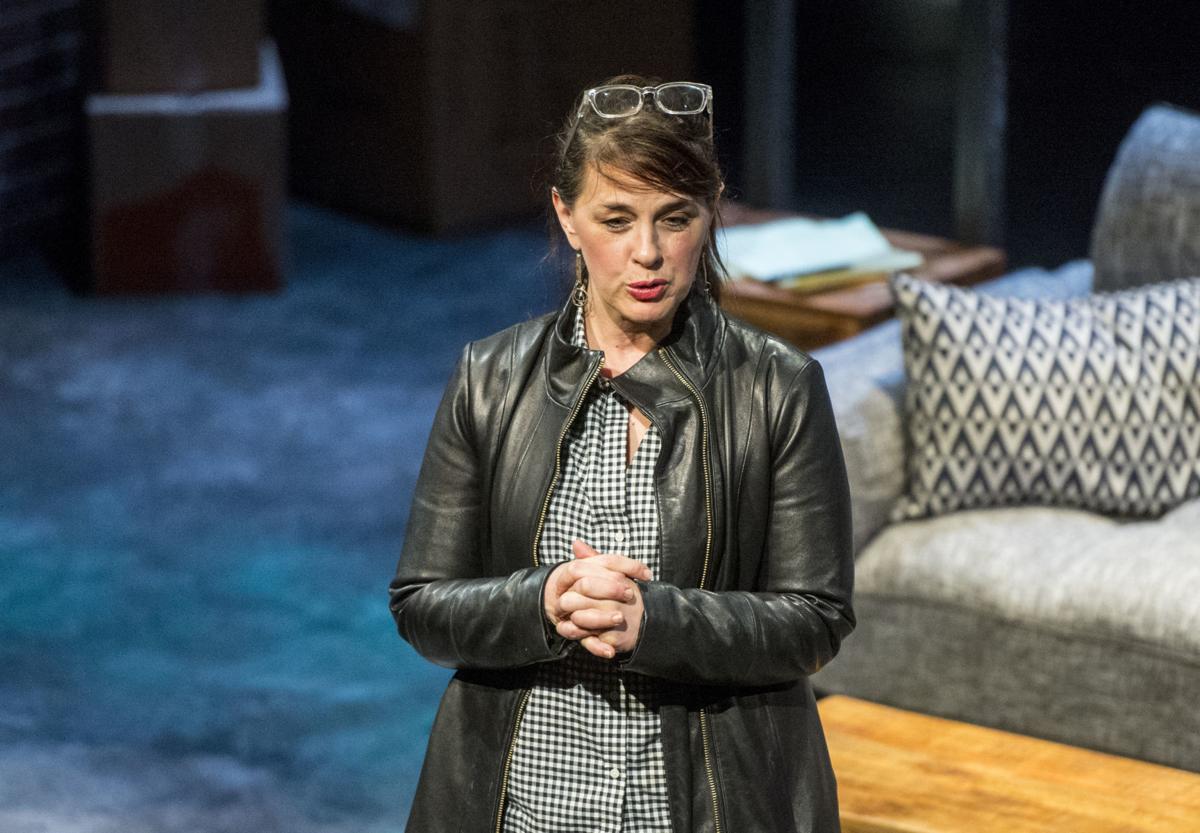 Abigail, played by Sierra Orr, and Carver, played by Carter Crosby, share a moment during a rehearsal of "Walls: An American Story" in the Studio Theater of the Forbes Center for the Performing Arts on Wednesday.

Foreground, left to right, Historical figures played by Abigail Theakston, Michael Fobian and Seth Sager represent modern-day Carver's ancestry and family background during a dress rehearsal of "Walls: An American Story" in the Studio Theater of the Forbes Center for the Performing Arts on Wednesday.

“Everyone has stories, whether they know it or not.”

Sierra Orr, a senior majoring in theater at James Madison University, plays the black female lead Abigail in the latest production “Walls: An American Story,” which raises the curtain for its world premiere tonight.

As the stage opens, so does a conversation of how deeply the future is embedded in the past. Following present-day interracial couple Abigail and her white fiance, Carver, audiences watch their engagement fall into jeopardy upon the consideration of taking a DNA ancestry test, which catalyzes to confronting the mistakes and cruelties done to their ancestors.

“The brutality of love … how do we navigate the complexity of two humans coming together with different stories? Is love enough?” said director and playwright Ingrid De Sanctis.

Guided by dramatic shifts in color orientation, lighting and an orchestral accompaniment, the stage repeatedly travels through time to witness the harrowing twists of the fate both families follow to arrive at the present.

In the opening scene, Abigail is attempting to cox Carver into writing their wedding vows for a premarital class before the conversation shifts gears at the mention of a gifted DNA test. What begins as a flirtatious evening turns into a test of the couple’s ability to reconcile the diverse obstacles of their family histories to salvage the relationship.

Orr said the play is a celebration of how history informs the present and how each decision and action shapes individuals.

“How I see myself as a black woman comes from the stories I’ve heard,” Orr said. “We all have reminiscence of what our history might have been.”

“Walls” was conceptualized by class of 1982 alumnus Paul Holland after a DNA test revealed he had traces of African ancestry in his family lineage. For people of European descent, identifying with a sliver of “African” can feel novel and exciting, but many black families are robbed of the ability to trace lineage because enslaved people were not awarded documentation and historical records.

Carter Crosby, a sophomore musical theater major who plays Carver, said that while a difficult topic to unravel, opening the dialogue to unpack historical traumas is rewarding for anybody and everybody.

“It’s been a great opportunity to dive into a messy and big topic. Personally, I think everyone can benefit from seeing a play like this. You can never open your mind enough to other cultures, other backgrounds, other experiences,” Crosby said.

De Sanctis grew up in the church and said her upbringing has shaped her to be a writer who brings social work into theater and forces audiences to navigate what sacrifices are worth making to overcome obstacles of humanity.

“We are all so different. So, what does it mean to create this thing where we are all trying to live side by side? How are we navigating a history that is not perfect to a future that is better?” De Sanctis said. “In our world today, we leave the room. We stay on the opposing side and point a finger. To move together in a community or really heal some of the stuff that’s broken, it’s hearing what you don’t want to hear.”

Taking Holland’s experience and ideas for the play, De Sanctis reworked and developed “Walls” alongside the cast, who collaborated on the scriptwriting.

Deshayla Lewis, a junior in the theater department, performs three roles: two of an enslaved woman and a partygoer in the 1940s celebrating soldiers returning from war. During meetings, cast members shared familial folklore. At one, Lewis spoke of her great-grandmother’s experience needing to trace her feet before buying shoes because she was not allowed to try on the apparel in stores.

Lewis said the inclusion of the personal family narrative allows her to feel a deeper connection to the show and reflect on advancements in racial equality over the years.

“Because I haven’t lived in a time so segregated, I can’t imagine,” Lewis said. “My great-grandmother passed away last year so having her in the show is sentimental for me.”

Sophomore theater major Maddie Thomas plays the role of a captive woman; Awen, Affiba’s younger sister, and Edna, a light-skinned woman trying to pass as Barcelonian in the 1950s because of the “one-drop rule.” For Thomas, wearing these personas allows her to connect to her familial past and better understand how the black experience in America has evolved.

“Black people back then had to change their entire identity to have a chance at life,” Thomas said. “My ancestors really went through this, and I feel connected portraying different characters from different eras.”

“Walls” debuts tonight inside the Studio Theater of the Forbes Center for the Performing Arts at 8 p.m.

“Everyone has stories, whether they know it or not.”