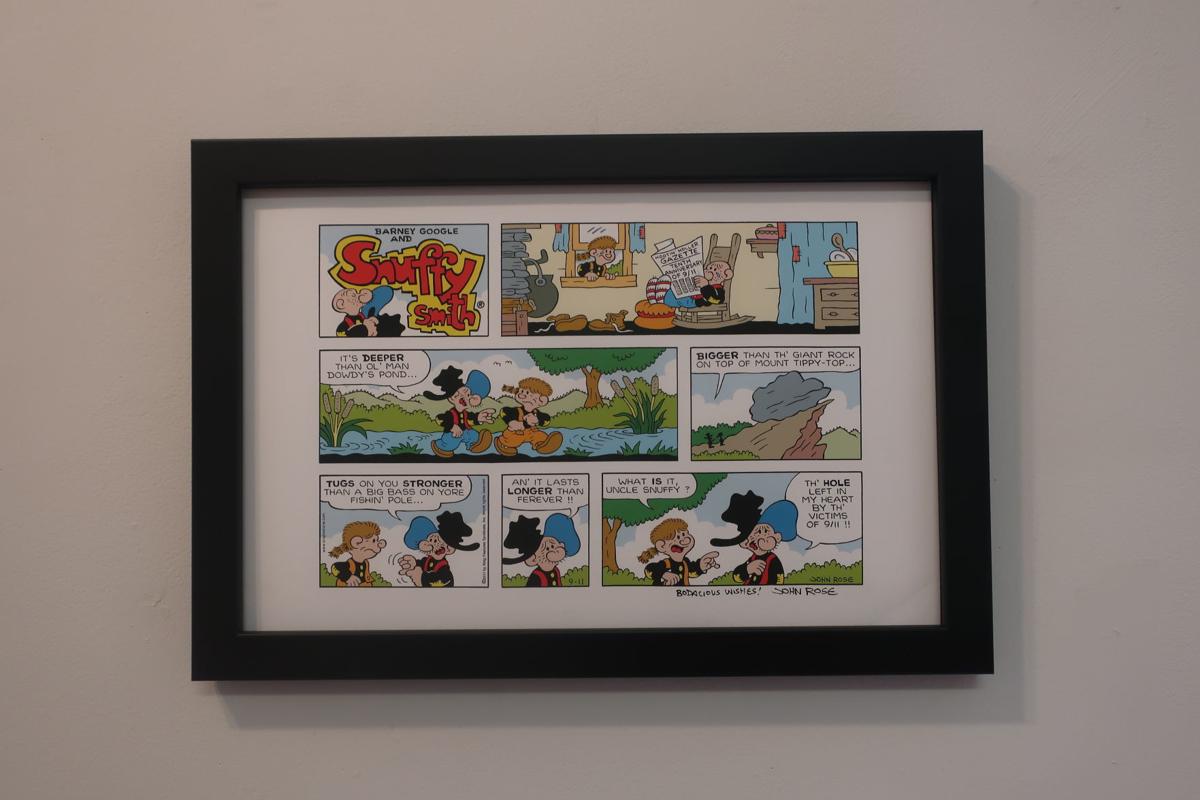 A collection of Daily News-Record cartoonist John Rose’s comics are on display at the Arts Council of the Valley’s Smith House Galleries. 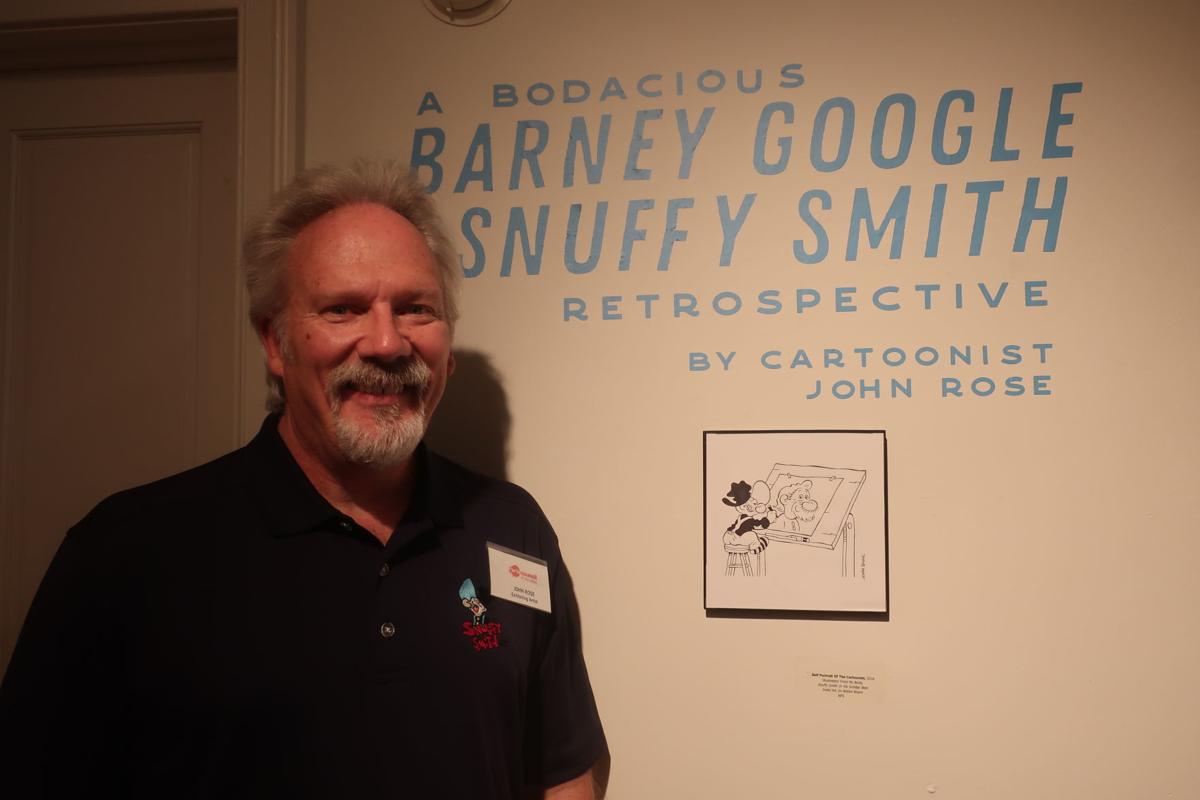 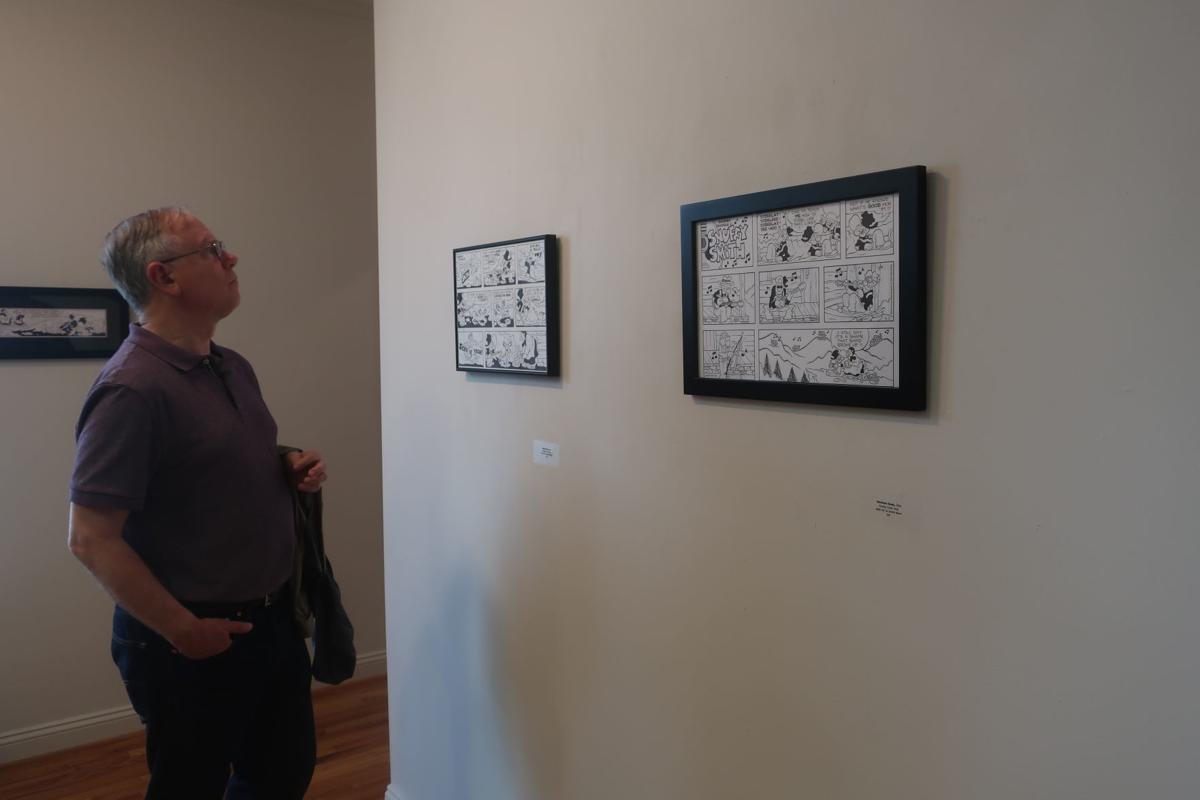 A collection of Daily News-Record cartoonist John Rose's comics are on display at the Arts Council of the Valley's Smith House Galleries.

A collection of Daily News-Record cartoonist John Rose’s comics are on display at the Arts Council of the Valley’s Smith House Galleries.

A collection of Daily News-Record cartoonist John Rose's comics are on display at the Arts Council of the Valley's Smith House Galleries.

HARRISONBURG — As a child, Daily News-Record cartoonist John Rose said his parents would catch him drawing on the living room walls. Now, his drawings adorn the walls of an art gallery.

“I’ve always wanted to be a cartoonist,” Rose said. “I started drawing on my parents’ living room walls. Then I went on through school, drawing in the margins on my test papers hoping to make teachers laugh to get extra credit.”

Since 2001, Rose has drawn the popular comic strip “Barney Google and Snuffy Smith,” which celebrates its 100th anniversary this year, making it one of the longest running comic strips of all time.

Rose is sharing a collection of his cartoons throughout the years at the Arts Council of the Valley’s Smith House Galleries, located at 311 S. Main St. The exhibit, “A Bodacious Barney Google and Snuffy Smith Retrospective,” opened to the public Friday evening.

“He is an incredible talent in the arts community,” said Jenny Burden, executive director of the Arts Council of the Valley. “To have a cartoonist of John’s caliber right here in Harrisonburg is special.”

Rose, 55, has served as the Daily News-Record’s cartoonist since 1993. He worked at the Byrd-owned Warren Sentinel in Front Royal for five years prior. He graduated from James Madison University in 1986 as a double major in art and art history.

“Barney Google and Snuffy Smith” was founded by Billy DeBeck in 1919 as “Take Barney Google, F’rinstance,” in the sports section of the Chicago Herald and Examiner.

The comic originally focused on the character Barney Google and his horse, Spark Plug. Snuffy Smith wasn’t introduced to readers until 1934 when Barney, a city dweller, met the beloved hillbilly and his friends and family in Hootin’ Holler on a trip to the Appalachian Mountains.

The comic told stories of their adventures, but Barney was eventually phased out of the strip by the 1950s. Since then, he has continued to make special appearances.

Rose is the comic’s third cartoonist over the course of a century. After DeBeck died in 1942, his assistant, Fred Lasswell, took over the comic. Rose became Lasswell’s inking assistant in 1998 and succeeded him after his death in 2001.

The comic, distributed by Kings Feature Syndicate, is published in hundreds of newspapers and digital clients around the world and is available in 11 languages.

Rose told the crowd gathered at Smith House Galleries on Friday that a daily comic strip takes him, on average, two and a half hours to complete.

“As a cartoonist, you have to work pretty far out,” he said. “I’m about nine weeks ahead on the daily comics and three months on the Sunday comics because they take a little longer to produce.”

His Sunday comics, which are published in color, typically take him 15 hours or more to draw.

“I use India Ink brushes and pens, and I do a lot of my coloring with special [Prismacolor] markers or I’ll use a computer,” Rose said.

He also creates many of the DN-R’s editorial cartoons.

Burden said the arts council wanted to celebrate the centennial anniversary of the “Barney Google and Snuffy Smith” comic strip with Rose.

“At the arts council, we want to show all different art forms and we’re trying to diversify in what we show. We’ve never had a cartoonist here,” she said. “I think it’s definitely fine art.”

Rose said what he’s doing now isn’t much different from when he was young.

“I’m really just doing what I did as a kid,” he said. “I’m not drawing on walls, but I’m drawing on paper. I’m hoping to make people laugh, that’s the whole aim of my art.”

“A Bodacious Barney Google and Snuffy Smith Retrospective” is on display at Smith House Galleries until June 27.