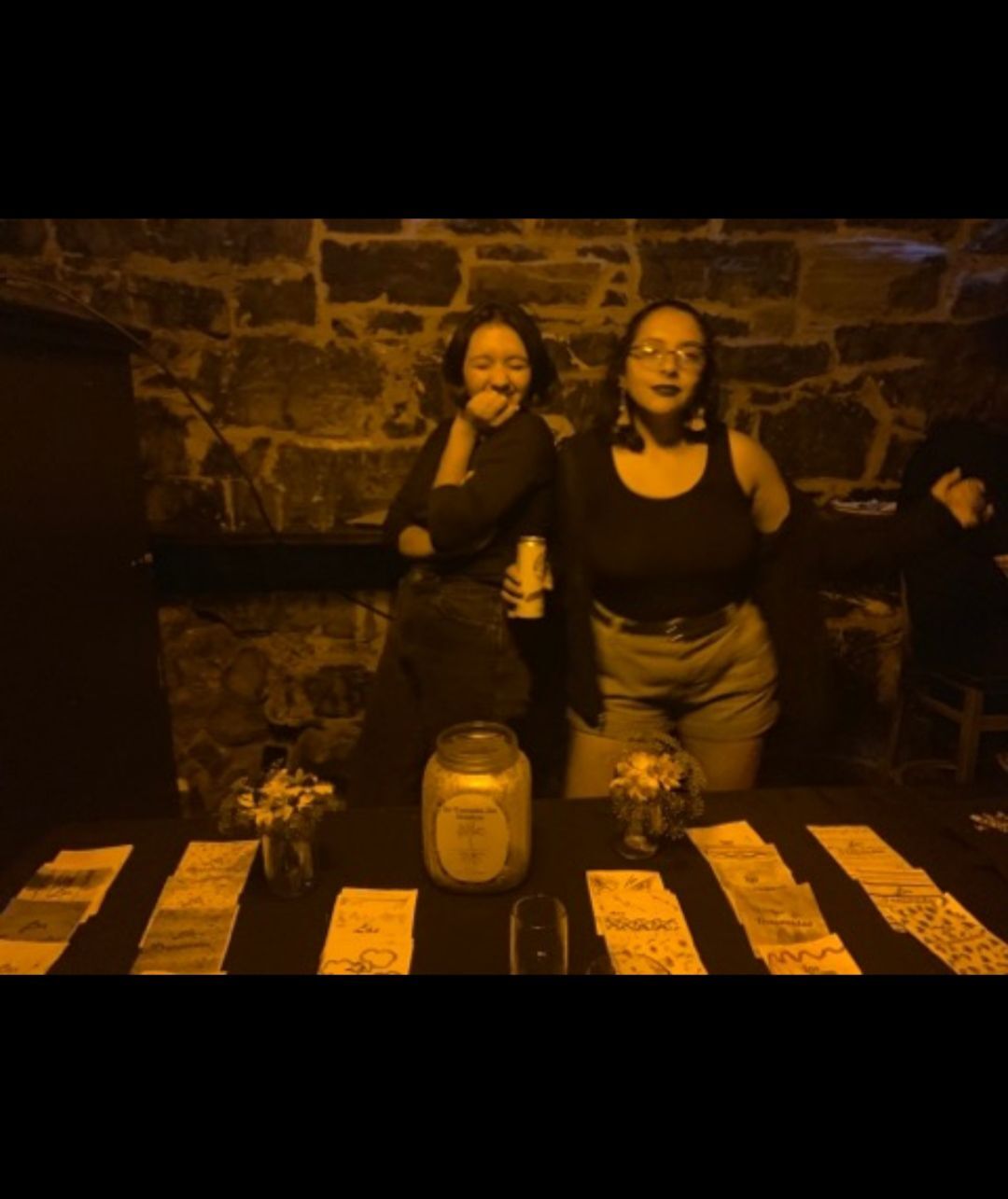 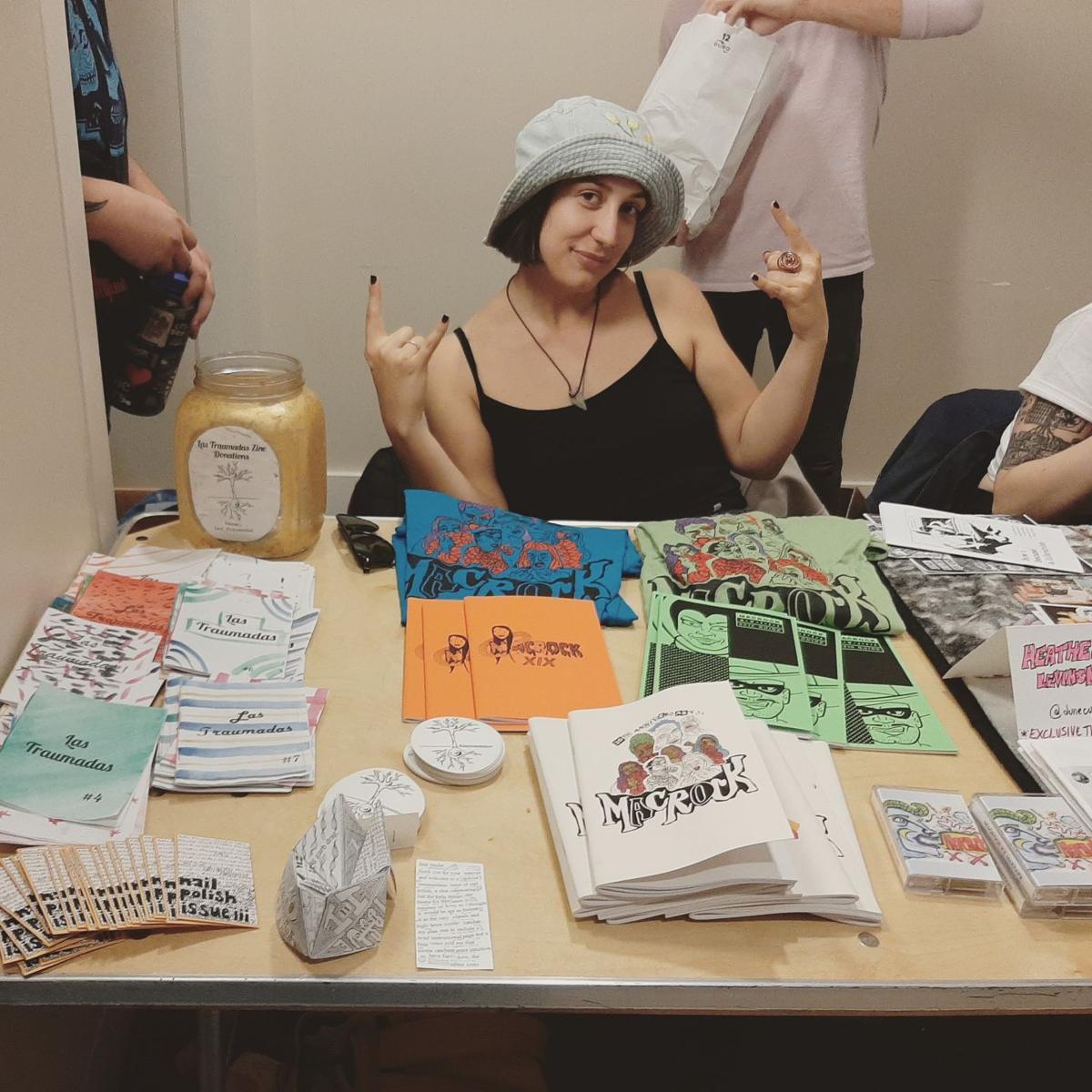 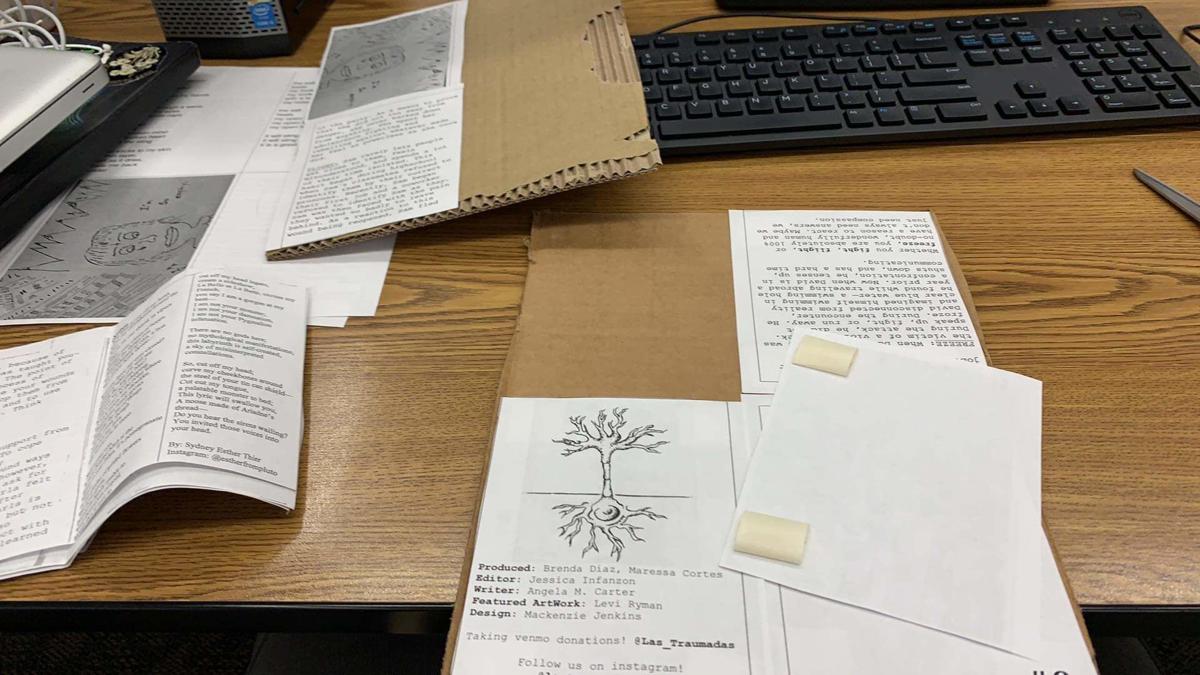 Las Traumadas co-founder Maressa Cortes said putting together each zine is a two-week process of layout and layering contributed content before scanning and printing nearly 100 copies to distribute. 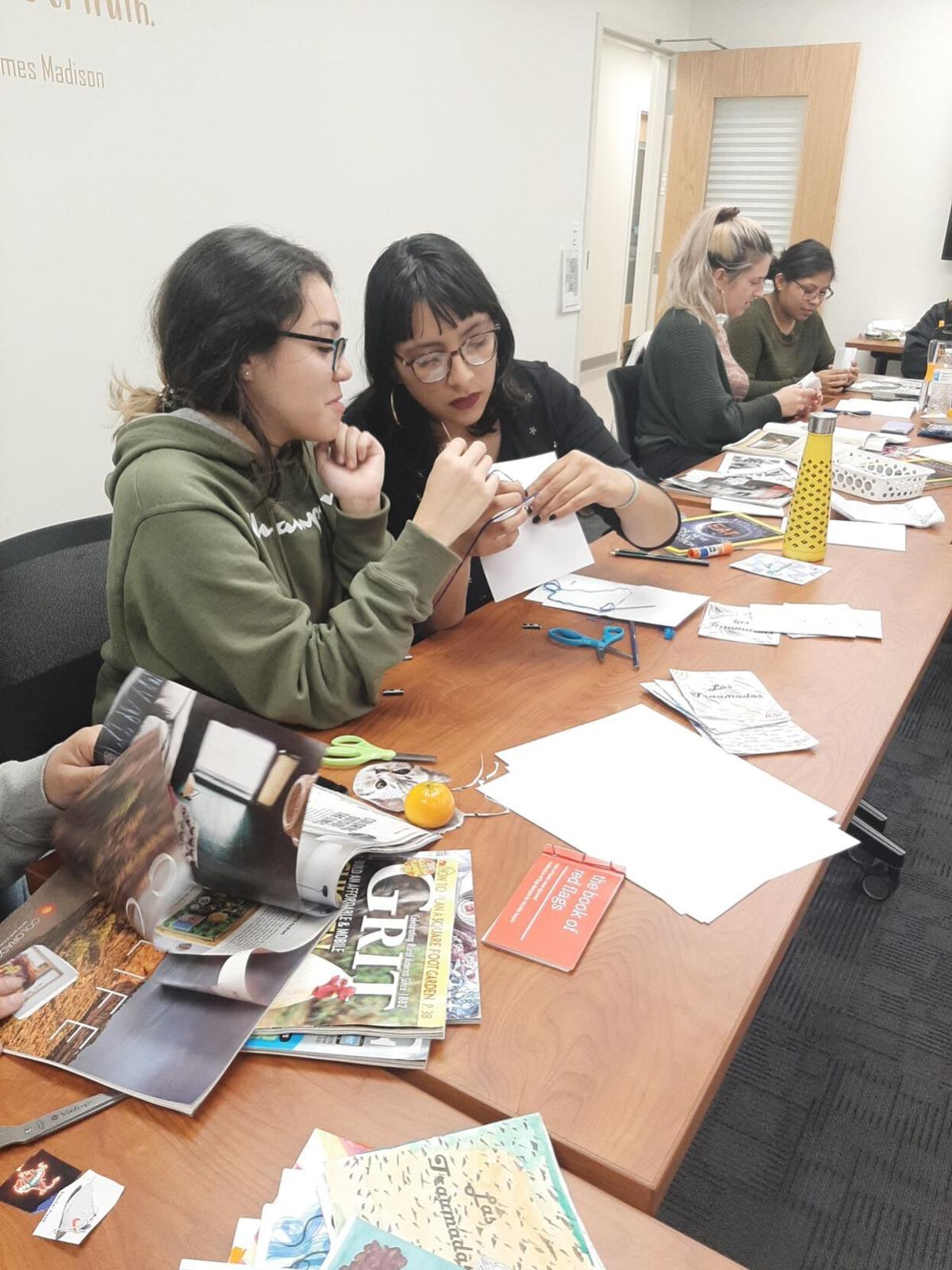 Co-founder Brenda Diaz-Castro, right, teaches a Harrisonburg student how to create a zine for a project during a community workshop. 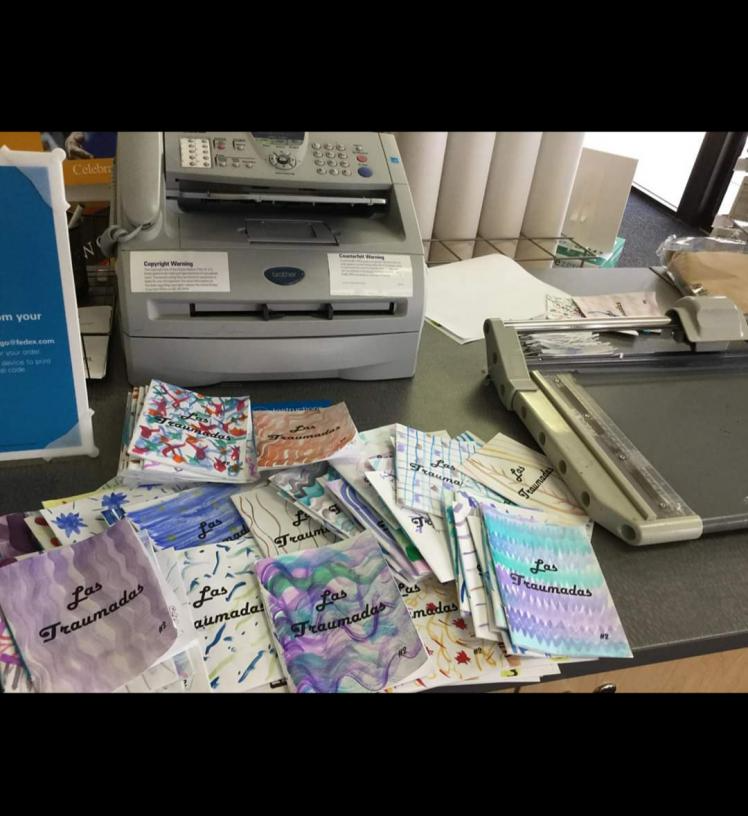 Each zine is decorated with individual watercolor designs.

Las Traumadas co-founder Maressa Cortes said putting together each zine is a two-week process of layout and layering contributed content before scanning and printing nearly 100 copies to distribute.

Co-founder Brenda Diaz-Castro, right, teaches a Harrisonburg student how to create a zine for a project during a community workshop.

Each zine is decorated with individual watercolor designs.

Splotched watercolor and free form poetry weaves through each issue of Las Traumadas, a composition of raw emotions in verbal, hand-drawn maps guiding readers onto the path of internal and interpersonal healing through empathy and understanding.

Since 2018, Las Traumadas has published and distributed free zines throughout downtown Harrisonburg in an effort to raise awareness of emotional intelligence. On Friday evening, Brothers Craft Brewing is hosting a fundraiser to benefit the nonprofit.

Director Maressa Cortes said she was inspired to co-establish Las Traumadas with the help of her friend Brenda Diaz-Castro while searching for meaning and purpose, and she realized relationships are the basis of everything and heavily dictate how individuals see the world.

Looking around the wide scope of issues being tackled by area initiatives, Cortes said there was one central idea no one was talking about: emotional intelligence.

Every two months, an issue is released with a different theme and contributed content from a local writer, poet, featured artist and an illustrator who doodles the surrounding spaces with the fluid, inner workings of their creative mind.

In previous years, the zine was stitched together by the team at The Golden Pony and distributed in common spaces like Black Sheep Coffee and Havana Cafe. During the pandemic, the team is working remotely and sending copies by mail for free to readers.

Theresa Kubasak first spotted the zine two years ago on her regular coffee run to Black Sheep. As a downtown resident and co-director of the international educational Iraqi/Syrian Student Project, she said the handmade, colorful cover and Spanish title captured her attention.

“I was attracted to the title because it’s in Spanish. That meant a lot to me because I know in Harrisonburg we have so many families that are bilingual and so many students who come from Spanish-speaking families, so I was excited to see that title and honor that culture,” Kubasak said. “To have it hand-colored, it’s so refreshing and so renewing to have a publication like that in Harrisonburg.”

After years of teaching writers workshops, Kubasak said she quickly recognized the feminist influences shining through the issues, which serve to welcome and engage a broader audience.

“I was attracted immediately to the prose inside because it was so authentic and genuine,” she said. “By writing about emotions, self-esteem, self-concept and other areas of emotional intelligence ... it created through a piece of literature a circle of compassion and a circle of self-knowledge.”

At Brothers Craft Brewing from 5 to 10 p.m., patrons can order a limited cask infusion of Fairgrounds Fall Ale on graham crackers and all proceeds will go to Las Traumadas.

Taproom manager Josh Harold said the brewery partnered with Cortes for The Shenandoah Valley Art Mobile in 2018, but this is the first event benefiting Las Traumadas.

Fairgrounds Fall Ale was once a signifier of changing seasons as the brewery’s “pumpkin pie beer” before it was discontinued years ago.

Harold said any project Cortes is involved with is sure to be a wonderful contributor to arts and collaboration in the community.

“She’s an extremely creative person and extremely easy to work with. She’s super excited about what she’s doing within her organization, so I can imagine that goes into this organization as well,” he said.

While the majority of outreach by Las Traumadas thus far has been through its zines tracing humane civil systems, Cortes said the organization occasionally hosts workshops and aims to foster more community engagement opportunities.

The multifaceted mission of Las Traumadas is best exemplified by the double-sided tree logo featured in each issue, a custom design drawn by local artist Delaney Keefe. Cortes said the tree roots spread wide mimicking its branches represents life, stability and being grounded while the parallel structure resembles a neuron, which ties into the organization’s original intent to tie its printed content into research and empirical evidence.

During today’s Cask for a Cause event, Cortes will be on-site to answer questions and lead a zine-making workshop and host a costume contest, both at the brewery and online. A silent auction for the framed event poster will also support the nonprofit.

Every purchase of a $5 pint of $10 32-ounce grunt of the select amber ale, Fairgrounds Fall Ale, will go directly to Las Traumadas and qualify the purchaser to participate in the costume contest. For virtual participation, photos must be sent through Instagram to @lastraumadaszine. The winner will take home a Bella Luna gift card and a Brothers Craft growler with a fill of their choice drink.