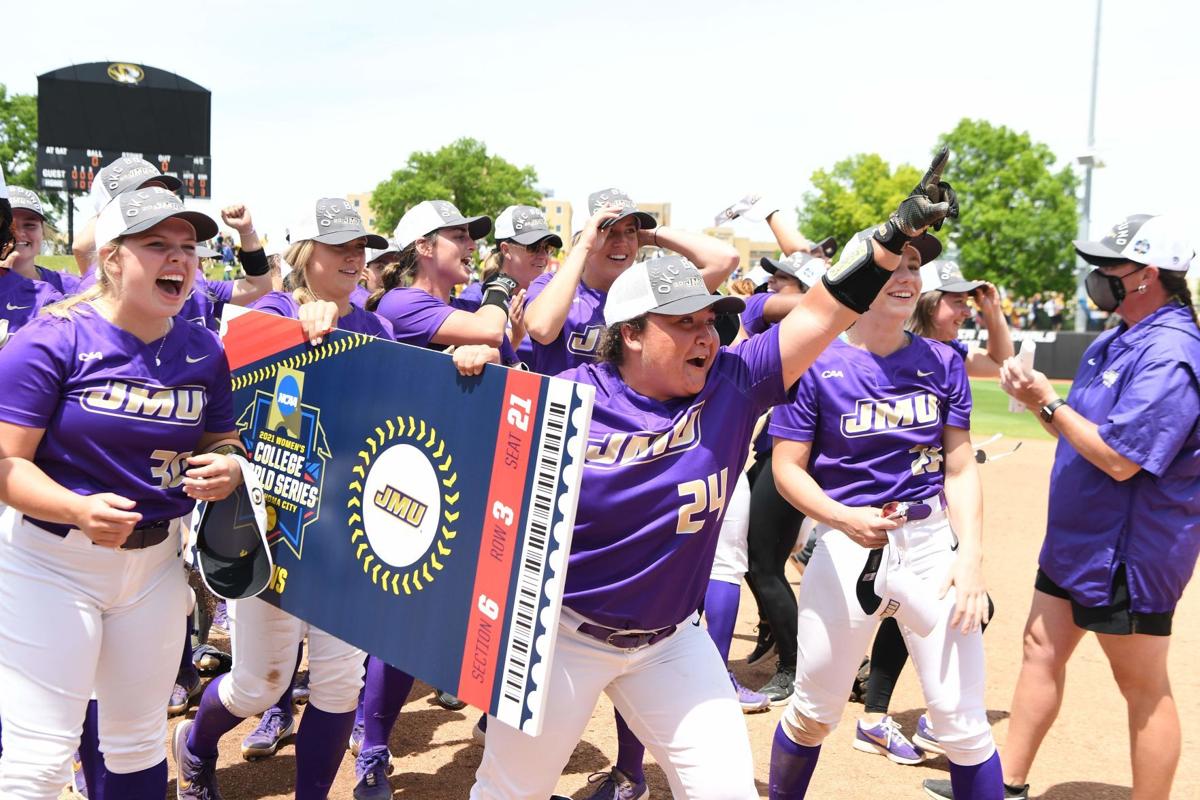 James Madison players celebrate a Super Regional victory at Missouri on Sunday. The Dukes will take on top-seeded Oklahoma in the opening game of the Women’s College World Series on Thursday. 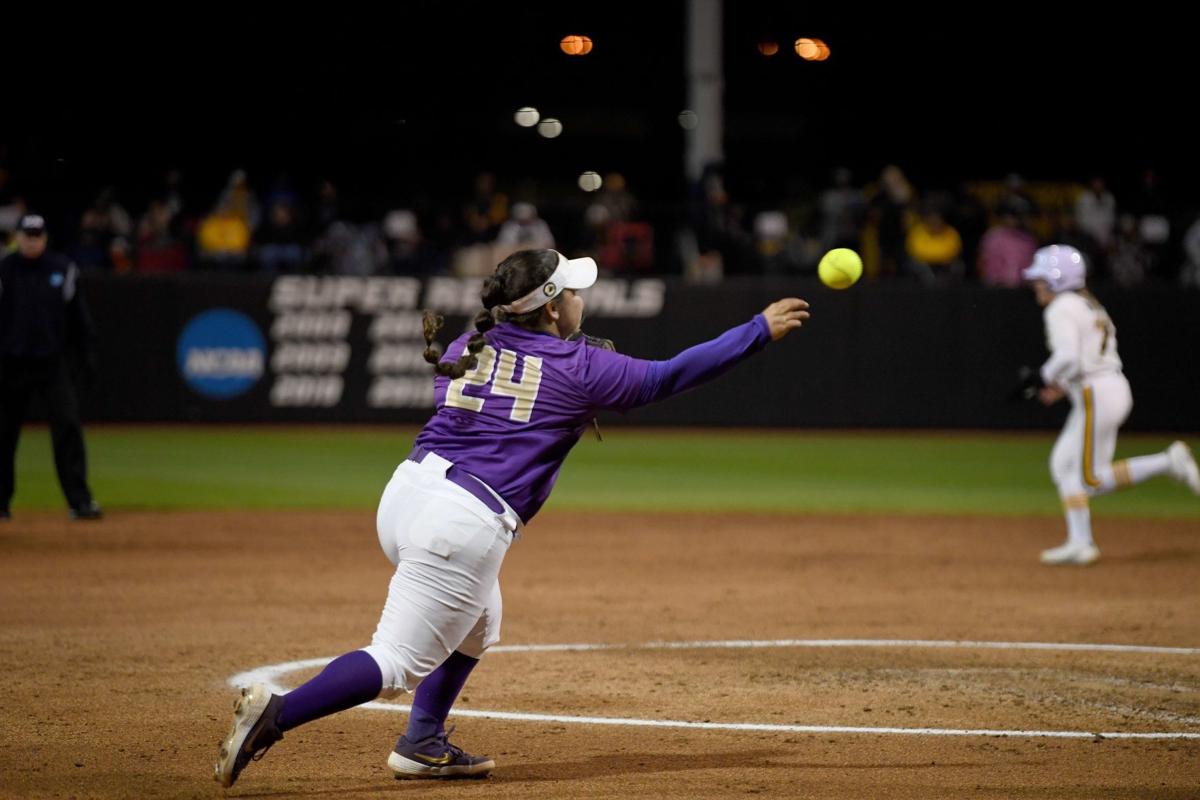 JMU third baseman Lynsey Meeks makes a throw during the NCAA Super Regional at Missouri. The Dukes took two of three from the No. 8 Tigers to advance to the Women’s College World Series.

James Madison players celebrate a Super Regional victory at Missouri on Sunday. The Dukes will take on top-seeded Oklahoma in the opening game of the Women’s College World Series on Thursday.

JMU third baseman Lynsey Meeks makes a throw during the NCAA Super Regional at Missouri. The Dukes took two of three from the No. 8 Tigers to advance to the Women’s College World Series.

COLUMBIA, Mo. — When James Madison softball made its first NCAA Super Regional in 2016, Loren LaPorte was a fourth-year assistant coach, awed by the noise and spectacle of a postseason game.

The Dukes were hosting that year, and LaPorte remembers walking into the stands before one game to get a good look at the line of fans stretching all the way out to the road in Harrisonburg.

“One thing that a lot of people don’t realize is the atmosphere,” said LaPorte, now JMU’s head coach. “As a coach, that’s what you remember.”

She also remembers the heartbreak of losing that series in three games, of falling one win short of the Women’s College World Series.

But now, five years later, the story has a new ending.

The unseeded Dukes marched into Missouri’s Super Regional and staged a three-game upset of the No. 8 national seed and advance to the program’s first Women’s College World Series. In front of three sellout crowds cheering against them, the Dukes captured two games including a clinching, come-from-behind 7-2 triumph in the winner-take-all Game 3 on Sunday.

Overlooked by the NCAA selection committee as the No. 3 seed in a four-team regional two weeks ago, the Dukes (39-2) are now one of the nation’s final eight teams. They’ve played a part in eliminating two Southeastern Conference juggernauts.

They will play the biggest dog of all, No. 1 overall Oklahoma, in the first game of the Women’s College World Series on Thursday in Oklahoma City. It’s a double-elimination format, so regardless of the result against the Sooners, James Madison is guaranteed a game against either unseeded Georgia, No. 5 Oklahoma State or No. 12 Texas.

“We’re gonna celebrate this tonight,” LaPorte said. “And then it’s prepare time, Monday, Tuesday, Wednesday. ... We want to show up and compete and not be intimidated. Yes, this might be the first time we’ve ever been there, but we want to make a name for ourselves.”

James Madison’s hero of the tournament thus far has been Odicci Alexander, the redshirt senior pitcher who has started every game. She limited Missouri’s offense to two solo home runs Sunday in a four-hit complete game.

“She had been living outside with her outside curveball, and she was jamming us like crazy [in Game 3],” Missouri coach Larissa Anderson said. “So they definitely made the adjustments.”

Some 15 hours after giving up six runs and not lasting through the second inning of Game 2, Alexander gave up a leadoff home run to Brooke Wilmes, a concerning sign that Game 3 might be trending the same way.

But the ace settled in for a gritty performance against Missouri’s lineup, which seemed all the more dangerous considering it was hitting against Alexander for the third time in as many days. She allowed two runners to reach base in the first and third innings, but both times she struck out Missouri left fielder Casidy Chaumont to strand them.

Bend-don’t-break was a theme. Alexander held the Mizzou bats to 0-for-7 with runners on base.

“She is gritty,” right fielder Logan Newton said. “Whether she’s on or off, she’s gonna fight until the last out. Pitchers like that are scary. She had to pitch against that team three times. It’s incredibly difficult.”

Still, the lead produced by the Wilmes homer lasted into the fourth inning. The Dukes were struggling to hit Jordan Weber again. In the series, they had scored three runs in the first 17 innings against Missouri’s pitching. But after Games 1 and 2, players preached during interviews that one hit is contagious enough to spark a rally.

Newton was proof of that theory. She singled up the middle to lead off the fourth, then reached third on a throwing error by Missouri third baseman and Virginia resident Kim Wert. With runners at second and third and one out, Meeks was tasked with trying to get the tying run home.

“I knew that they were gonna pitch inside to me,” Meeks said. “If it was going to be an inside pitch, I needed to get air under it so I could get Logan home. I knew I needed to put as much power into it as I could.”

She sent a jam shot into shallow center field, and Newton raced to the plate on the sacrifice fly to make it 1-1.

“It wasn’t a very well hit ball, but I got it far enough,” Meeks said.

The spark in the fifth inning was a leadoff single for catcher Lauren Bernett. She reached second on a sacrifice bunt and still stood there with two outs. Shortstop Sara Jubas fought off an 0-2 pitch for a go-ahead single to center. She made it all the way to third when Wilmes’s throw home sailed over the catcher. Alexander was next up, and Missouri’s shortstop muffed a grounder that allowed Jubas to score.

That two-out, two-run rally would have been enough on its own to win, but the Dukes nursed a 3-2 lead into the seventh and finally exploded for their biggest inning of the series. Newton, Madison Naujokas, Emily Phillips and Bernett all drove in runs to blow the game open. Alexander’s final three outs were a formality.

“It took everyone; everyone stepped up to give [Alexander] that breathing room,” LaPorte said. “It’s a dream. It’s a dream for not just us as a staff, but it’s a dream for every single one of these kids. When they started growing up and playing ball, that’s what everybody dreams of in this sport.”

After a 7-1 loss in Game 2, the Dukes had their backs to the wall but silenced another record crowd of 2,686 in Missouri. They had made three Super Regionals in the last five years. This was the first to end in a mob of joy.

“Yesterday they were fighting for survival for their seniors, and today we were,” Newton said Sunday. “I think that was the ultimate game changer.”

“I think our players did a really good job at thriving with everybody in the stands,” LaPorte said, reflecting on the lessons learned five years ago about embracing the high-stakes atmosphere. “Because it can be tough sometimes. It’s pretty awesome to have three sellout days, and most of the people are up against you, so it’s one of those things. We didn’t let it affect us. We actually thrived from it.”