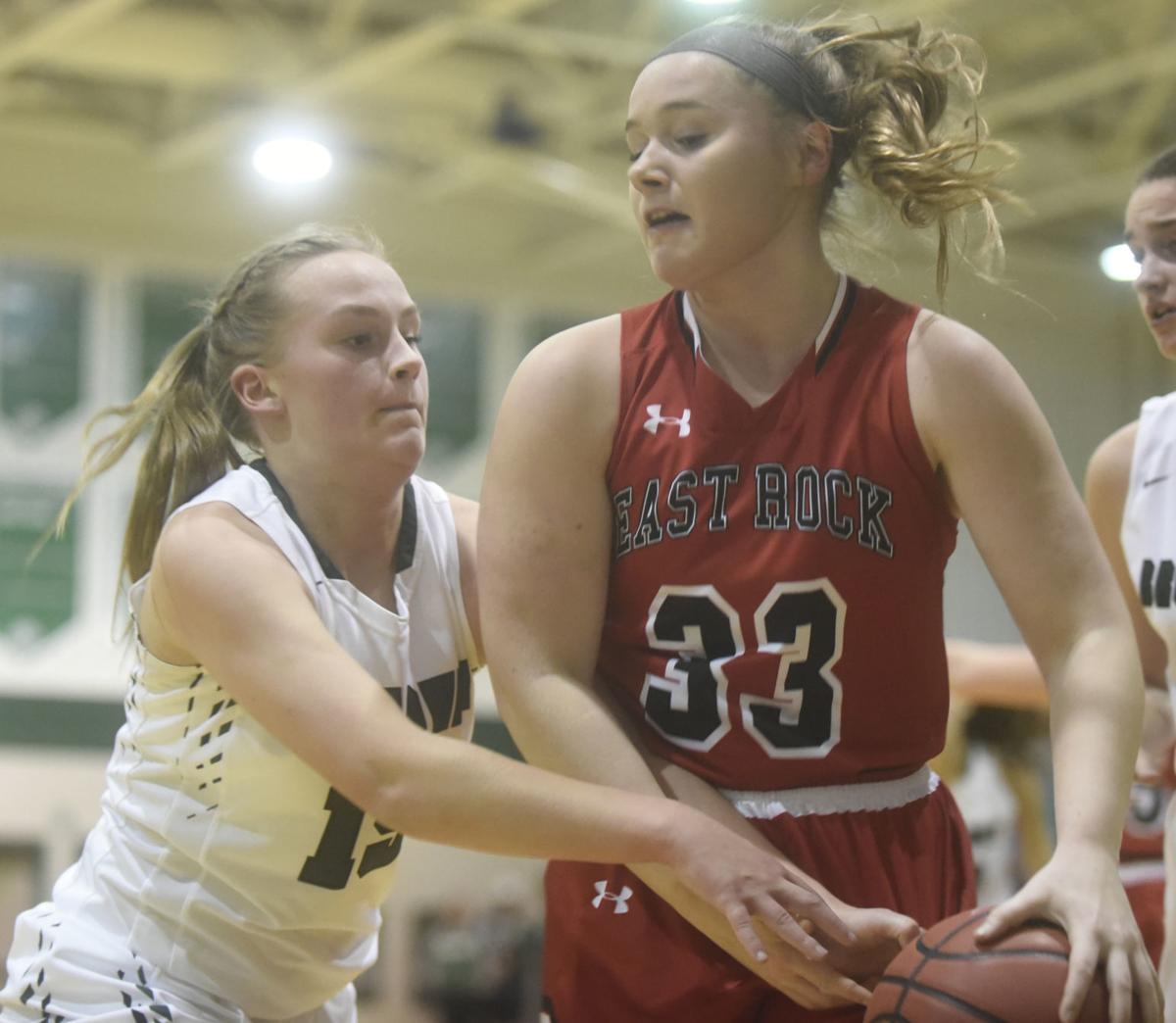 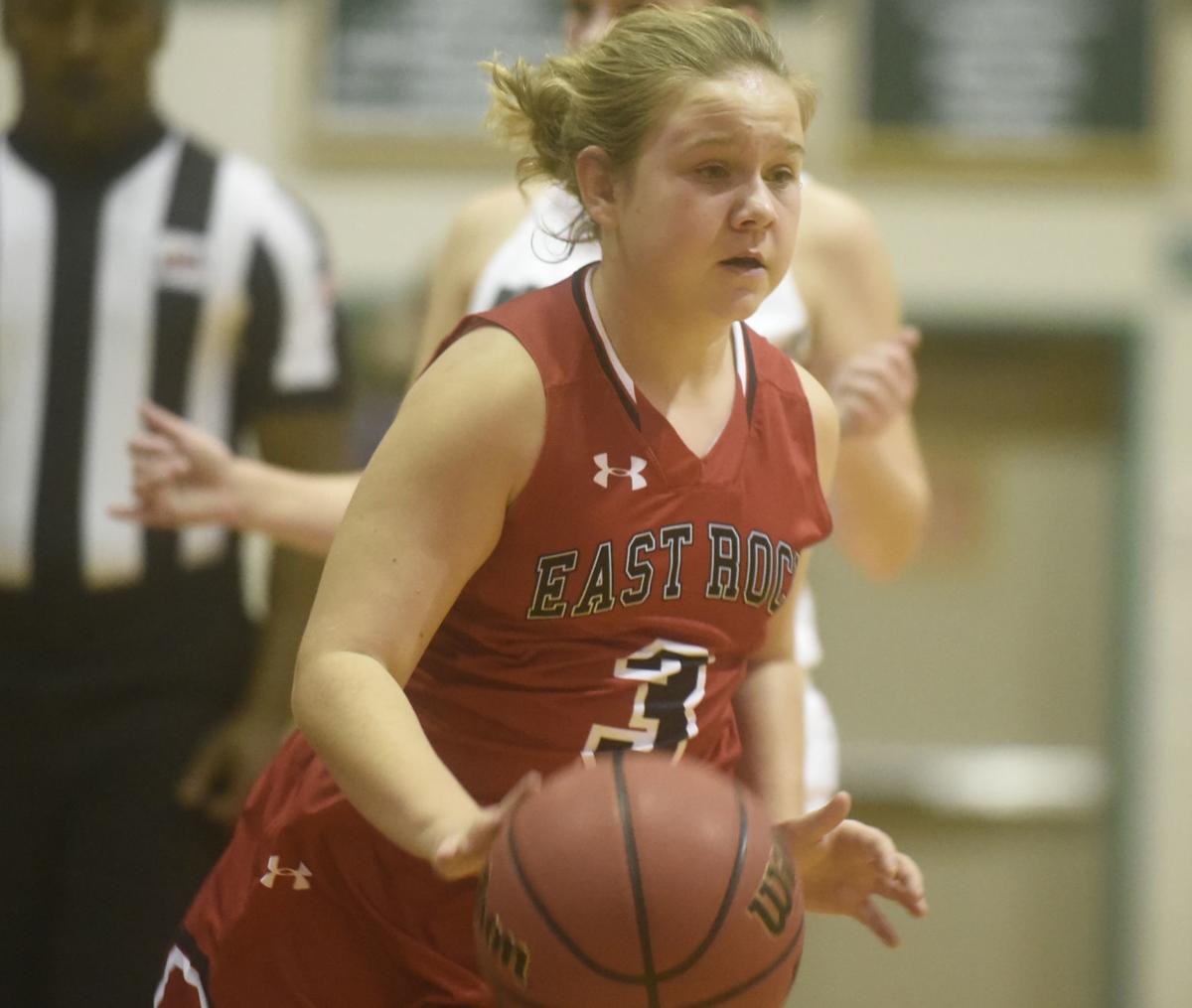 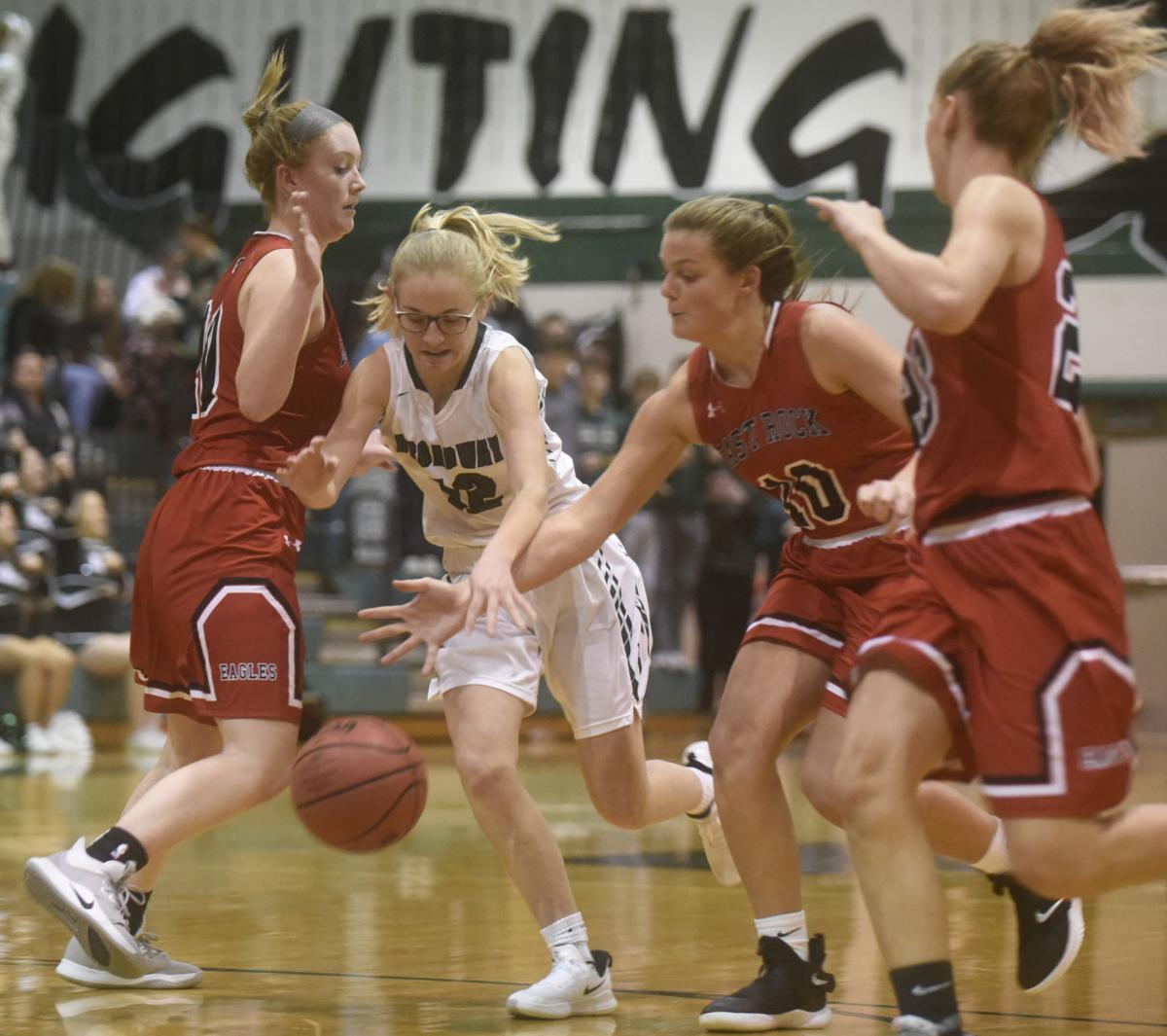 But after putting together a fourth-quarter rally to defeat Broadway 49-46 on Monday in non-district action at BHS, the Eagles were having quite the celebration for the first time.

“We’re very happy,” said East Rockingham sophomore guard Sarah Smith, who had 12 points in the victory. “We’re yelling, jumping, everything. It was a good team win.”

Besides providing the Eagles their first winning feeling of the season, Comer said the way East Rockingham earned it was arguably the most impressive part of the night.

The Eagles trailed for a majority of the contest and were down nine early in the fourth.

But after five quick points from Alexis Baugher forced the Gobblers to call a timeout, East Rockingham continued to pour it on as they found a sudden surge offensively.

“We went to that man-to-man in the fourth quarter and we suddenly score 24 points,” Comer said. “We’ve been struggling to score points, so we’ll see where that takes us. It was a good effort from our kids. I thought we battled. There was no quit in them.”

The Eagles took their first lead since early in the second quarter when freshman Ashlyn Herring scored down low off an assist from Sage Fox with 1:08 remaining in the game.

After Fox forced a jump ball on the opposing end to give East Rockingham back possession, Smith connected on a pair of free throws to extend the lead to 49-45.

“She was big,” Comer said of Fox. “We talk about her a lot. A lot of the stuff she does for us doesn’t show up in the stat sheet. She just plays hard on both ends of the floor. We got extra opportunity after extra opportunity just from her going after the ball. That picked up the energy on the defensive end, too, and that seemed to help us offensively.”

While Fox contributed offensively with eight points, it was her rebounding that was key.

As one of three seniors on the Eagles roster, she is one of the biggest leaders for East Rock, but it’s her willingness to do the little things that Comer called the difference.

“We all need to work on our hustle and our effort,” Fox said. “That’s what it really takes to win games. It’s heart over everything. You just have to outwork the opposing team.”

Another key for the Eagles was junior Makenna Siever playing the point guard role.

Siever, who played key minutes last year as a sophomore, ran the offense smoothly Monday and helped East Rockingham do well at taking care of the ball.

“She did fine,” Comer said. “I don’t know what the turnover rate was, but it wasn’t nearly what it had been. We’ve got things to improve upon there, but I liked our lineup tonight.”

For the winless Gobblers (0-6), it was another rough loss to start the season and coach Scott Martin called it a tough one to swallow after leading most of the way.

“We weren’t able to close the way we wanted to,” Martin said. “Free throws have hurt us a little bit this year. I thought we had some opportunities in transition to get easy buckets, but we passed when we probably should have shot. We got a lot of good looks. I’m pleased with what our offense generated. We just weren’t able to convert.”

Despite the loss, Martin said he remains confident Broadway can turn things around.

The Gobblers are one of the younger teams in the area with five freshmen and three sophomores and Martin said he expects them to continue to improve each week.

“That’s one thing we’re pretty pleased with,” Martin said. “Everyone is continuing to come and staying connected. We’re in a process of learning how to win, how to put together four quarters. Once we do that, I’m confident we can put together a run. We’re learning and growing every day and trying to understand how to play consistent.”

Comer, too, was pleased with how much improvement the Eagles have shown.

Baugher had nine points for East Rock (1-4) while Siever and Lexi Campbell each added eight.

“We’ve been talking about staying the course here and not going out and losing our minds,” Comer said. “It’s baby steps for us right now, but that’s a big. We actually had a little kick in our step and they’re starting to see that if you compete a little bit and play a little harder, things tend to work out a little better.”

Fox said the Eagles took a major step forward on Monday with their come-from-behind win and said it was just what they needed to build some confidence moving forward.

“I just think this game proves that we actually do have what it takes to win,” Fox said. “I think we were all discouraged by our losing season so far, but this is really going to motivate us to work harder.”

Coming out of a winning locker room for the first time this season, Comer couldn’t help but crack a smile after finally seeing his players with smiles on their faces after a game.

The dejected feeling was no longer around the Eagles, he said, and he said he’s optimistic that brings more success in the upcoming weeks.

“I think it’s big for them,” Comer said. “They’re trying, but we’ve just been a little overmatched in the early going. We’re getting our feet under us and what roles our players have. We’ll get better as time goes on. I’m proud of our kids. I like this team. I think we’re making progress. We’re young, but we’re learning and that’s the main thing.”