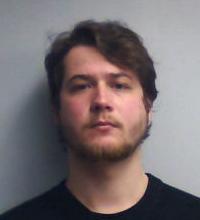 An Elkton man charged in connection with the death of a Luray child in November failed to seek emergency help after the 10-month-old boy became unresponsive, Luray Police Chief Bow Cook said Thursday.

The charges, according to police, stem from a Nov. 29 incident.

On that day, Cook said, the child’s mother went out and left the boy in the care of Zimmerman, her live-in boyfriend.

Cook said that Zimmerman told investigators he placed the child on the couch to change him and then left the room.

He told authorities he left the room for 20 seconds and returned to find the child on the floor, face-down and crying.

Instead of calling 911, Cook said, Zimmerman called the child’s mother, who was roughly 30 minutes away.

The mother drove home and took the child to Page Memorial Hospital.

The hospital then called the Luray Police Department, and the investigation began.

Cook said investigators waited to file charges until the medical examiner’s office issued the child’s cause of death. Cook declined to release the cause of death.

Zimmerman is being held without bond at the Page County Jail and is awaiting a preliminary hearing in Page County Juvenile and Domestic Relations Court.