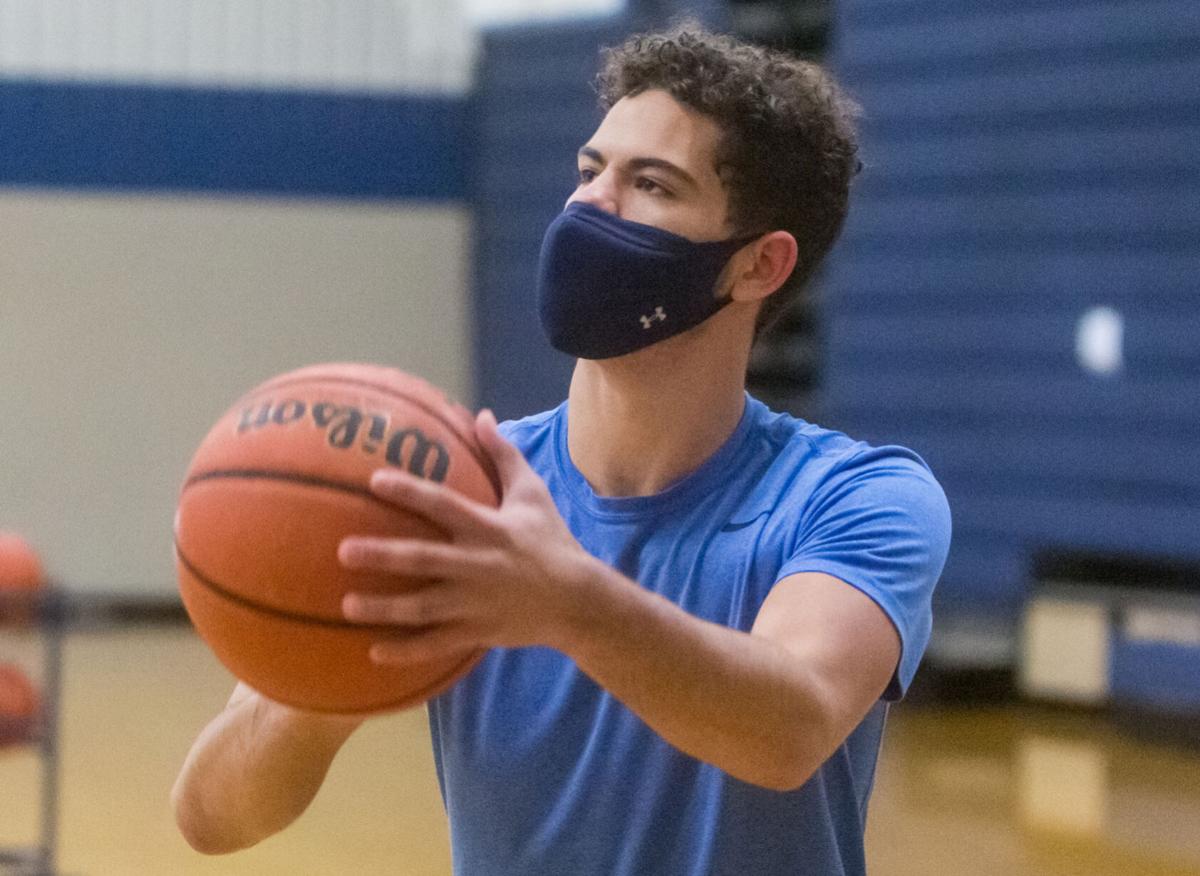 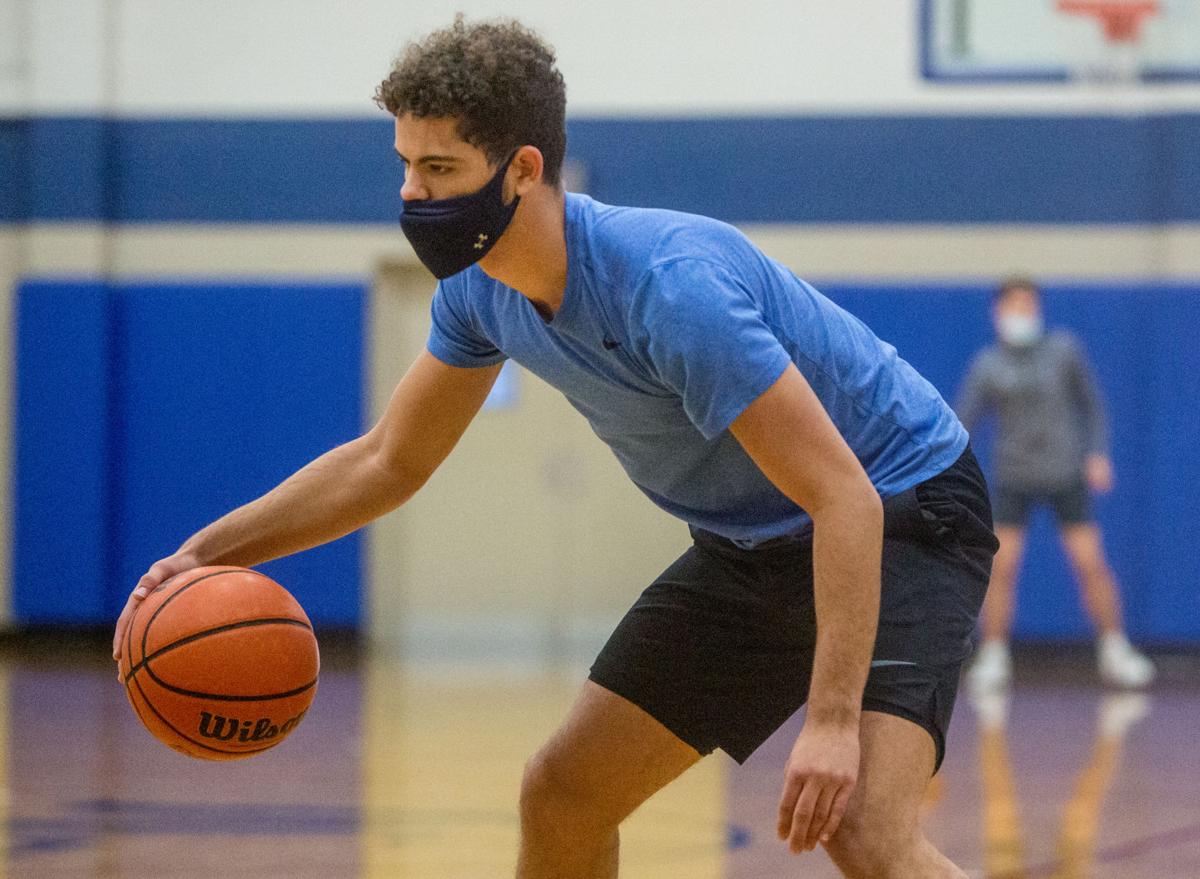 Eastern Mennonite’s Nick Jones, a senior, runs through drills during a workout Wednesday in Park View.

Eastern Mennonite’s Nick Jones, a senior, runs through drills during a workout Wednesday in Park View.

When Nick Jones arrived at Eastern Mennonite High School prior to the 2019-20 school year, he knew he would reclassify as a junior and play basketball for the school but his main focus was on improving his academic standing.

The 6-foot-3, 184-pound wing from Staunton had it in the back of his mind that he’d like to continue playing at the college level if it ever came, but he knew he had work to do — in the classroom and on the court — to make it happen.

“There’s a lot of boxes you need to check as a college player and a lot of his were unchecked [upon arrival],” Flames boys basketball coach Chad Seibert said. “For Nick, I’ve seen an amazing amount of maturity, growth, development.”

Despite a year unlike any other due to COVID-19 and uncertainty still looming as he holds out hope for his senior year, Jones announced his commitment to Stevenson University — a Division III school in Owings Mill, Md.— last week.

The Mustangs are a member of the Eastern College Athletic Conference, winning league titles in 2014 and 2015, and have made two NCAA Division III tournament appearances and reached the postseason a total of five times.

“My attitude through this entire thing was just focused on getting better, see what I can do,” Jones said. “The recruitment was going to come either way. So whatever I’m doing, I just have to get better and not go through the motions. It’ll come. They have a lot of success in their program. It’s in a good location. It fits my needs. It was perfect.”

In 2018-19 with R.E. Lee, Jones averaged 5.7 points and 4.5 rebounds per game and played a huge role as the Leemen made a surprise run to win the Shenandoah District tournament title with an upset of East Rockingham.

With the Flames, last year, he served as the team’s sixth man and excelled. He finished the season with career-best averages of 7.6 points, 6.2 rebounds and 0.9 steals per game while shooting 54 percent from the field.

“I feel like [Stevenson is] getting a steal,” said Seibert, who is in his third year as head coach at Eastern Mennonite. “He came off the bench for us and he really improved his ability to put the ball on the floor and do some different things offensively. He hasn’t had a chance to showcase that because of COVID. They saw him and they were all over him. Not a lot of people have seen the improved version of Nick. When people see him, they’re going to be like, ‘Holy cow. Where did this guy come from?’ He worked for it. He’s a blue-collar kid, a blue-collar player. We asked him to do a lot of dirty work last year and he brought a spark off the bench. There’s nobody better to sell that than Nick.”

While his improvement statistically has been impressive, it’s Jones’ effort in other aspects of the game that separate him from his peers and make him such a key element of a Flames team that once again has high expectations.

“He brings a tenacity and plays hard,” EMHS guard Trey Gillenwater said. “He plays defense, plays his role and plays it well. He doesn’t do too much, but he does what he does really well. It gives us energy. Even in practice, if we’re just going through the motions, he’ll do something to get us fired up. It’s stuff other people wouldn’t do and it helps a lot.”

“I just don’t feel like I need to score,” Jones said. “The time might come where I need to, but I’d rather go out and get 10 boards and a bunch of hustle plays to hype up the team than score 20 and lose. That’s my mentality every night.”

Whether it’s a loose ball, a key offensive rebound or simply playing with a sense of energy that goes unmatched on a nightly basis from most opponents, Jones brings a dynamic to the court that translates to any level of the game.

“I just have to keep working as hard as I can to help us win,” Jones said. “Nothing else matters to me besides winning games. Stats don’t matter unless you’re winning games. That’s honestly all I care about.”

Seibert said he’s been impressed with the way Jones has learned how to play with passion while also handling it responsibly. Last year, before games, the head coach often told his sixth man to “play with emotion, but don’t be an emotional player.” Ultimately, it worked out as Jones showed steady improvement throughout the entire season.

“That was part of the learning curve with me,” Seibert said. “He’s learned to manage that better. Energy is a skill. That is something they’re getting in him that you can bring every single day, it’s consistent and it helps everybody.”

The past two seasons, 6-foot-4 forward Aviwe Mahlong has served as a matchup nightmare for opposing teams. With Mahlong now in his freshman season at Division II Millersville University in Pennsylvania, Seibert said Jones will likely take on that role.

Coming off a second consecutive trip to the VISAA Division III state championship game, expectations are again high for a Flames squad that’s holding out hope to begin its season at some point this year despite COVID-19 restrictions.

“It exceeded what I even thought it would be,” Jones said about the year and a half he’s now been enrolled at Eastern Mennonite. “We’ve accomplished more than I think anyone would have thought for all of us coming in. We won a conference championship, reached a state championship. It’s crazy how we’ve meshed over the past year.”

When Jones arrived at EMHS, his focus was on improving his academics while still playing the game he’s played his entire life. That’s why returning to the court one final time with his Flames teammates is so important to him.

“It would mean a lot, man,” Jones said of a return. “It’s been crazy to see how we really have meshed together. I think we can do something special. If we’re able to go out there and play again, the sky is the limit. I think we can do a lot.”

If Jones was asked about attending college in the fall of 2019, he would have admitted that he had work to do.

Now, with a commitment in hand, the Eastern Mennonite senior that has dreams of becoming a history teacher one day can finally say he checked all the boxes and accomplished the work he set out to get done.

“It’s not even close,” Jones said of his growth. “I’ve improved so much. I’m not even the same player as I was last year. I feel like I just keep evolving as a player. It’s been cool to see.”