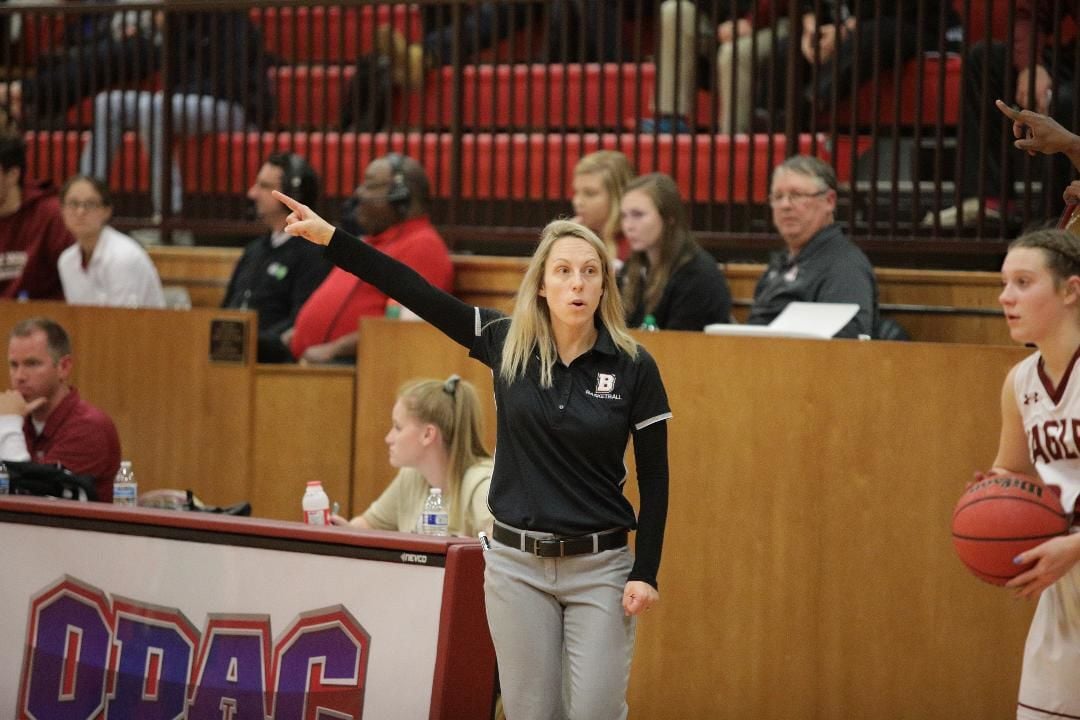 Sarah Mathews is preparing for her fourth season as the Bridgewater basketball coach. 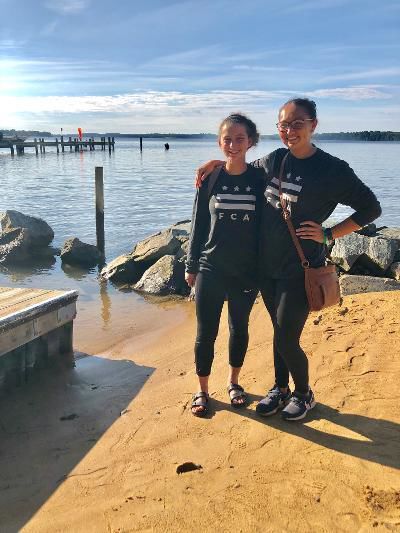 Jolee Paden (left), a former EMU runner, spent several years working with college students and coaches in the D.C. area as part of FCA. Here she is with Kiana Quolas, an assistant softball coach at George Washington.

Sarah Mathews is preparing for her fourth season as the Bridgewater basketball coach.

Jolee Paden (left), a former EMU runner, spent several years working with college students and coaches in the D.C. area as part of FCA. Here she is with Kiana Quolas, an assistant softball coach at George Washington.

Jolee Paden is back among friends in the nation’s capital — though by now the former EMU standout was hoping to be overseas.

Earlier this year, the former runner for the Royals accepted a position with the Fellowship of Christian Athletes in southeast Asia. After working with college students at George Washington and Howard, Paden was eager to connect with coaches and athletes at her new position in Malaysia.

Paden planned to be overseas by the end of the year but travel restrictions due to COVID-19 has her back in Washington, D.C. after a year filled with travel around the country to more than 10 states.

“The borders are closed (to foreigners) in Malaysia until the end of this year,” Paden said in a phone interview Thursday. “It is good for clarity; October 20 was when I planned to leave. I did not buy (airline) tickets because we saw the writing on the wall.”

With about 32 million people, Malaysia is south of Cambodia and west of Indonesia. The majority religion is Islam (roughly 60 percent), followed by Buddhism and then Christianity at about 10 percent.

Paden, a 2017 EMU graduate, has not been idle since accepting the new position earlier this challenging year.

She took part in a month of cross-cultural training with FCA in Colorado in September and has traveled around the country meeting friends and supporters.

Paden has been to western North Carolina, where her parents live, but plans to be based in the nation’s capital for now.

“We have a big conference the end of February” in Texas, she said Thursday. “I will evaluate after that” about when to head to southeast Asia. Then on Friday that FCA conference was called off.

Paden graduated from EMU with a degree in Rec and Sports Leadership, Business Administration, and moved to the Washington, D.C. area in 2016 and worked with Back on My Feet, an organization that uses running to fight homelessness. She helped coach a high school cross country team at Eleanor Roosevelt in Maryland and she joined FCA D.C. as a campus rep in 2017.

She has been able to meet up with student-athletes at GW, including a softball player, while staying in Washington.

Earlier this week, the ODAC announced basketball will be the first sport to begin this academic year with a date of Jan. 23.

That gives Bridgewater college Sarah Mathews something to shoot for — her team plays that day at Lynchburg. The men of BC host Roanoke on Jan. 28.

“A light at the end of the tunnel,” she told the News-Record on Friday. “We are beating up on each other in practice. We are excited to beat up on somebody else.”

The Eagles have been practicing three times a week, according to Mathews, who became a mother for the first time July 29 with the birth of son Macson. Her husband, Bryan, is an assistant coach for the BC men after he was the head boys coach at Turner Ashby for one season.

The ODAC plans to have each school play 12 conference games with a four-team tournament. “I think we have a chance to be competitive in the post-season,” said Mathews, whose team surprised a lot of folks in the ODAC last season.

BC adds two transfers that should see key minutes: Jennifer Davis, who is from Richmond and played at Division I Towson, and Taylor Stafford, who had been at Division II Fairmount State in West Virginia.

A new assistant coach is Jason Asbell, previously at Davis & Elkins in West Virginia. Reggie Blackmon, an assistant last season, became the head coach in May at Division III Agness Scott in Georgia.

Mathews has a mark of 78-41 in three seasons with the Eagles.

Earlier this year the ODAC decided not to have any events until at least Jan. 1.

“That was the first move,” EMU athletic director Dave King told the News-Record earlier this week.

Then came the news earlier this week on starting with hoops on Jan. 23.

“The discussions have led themselves to what is the maximum time we can get. There is a way for everybody to get in (their season) starting with basketball,” King said.

The two main things ODAC presidents signed off on were moving forward with the schedule and that all ODAC schools would agree to the NCAA minimum protocol for virus testing, according to King.

The ODAC champion in basketball will get a bid to the NCAA tournament, King noted.

“The access to championships is there,” King, aware of rising COVID cases around the country, said in adding there is outside chance the NCAA could call off national tournaments. “Right now things are looking good.”