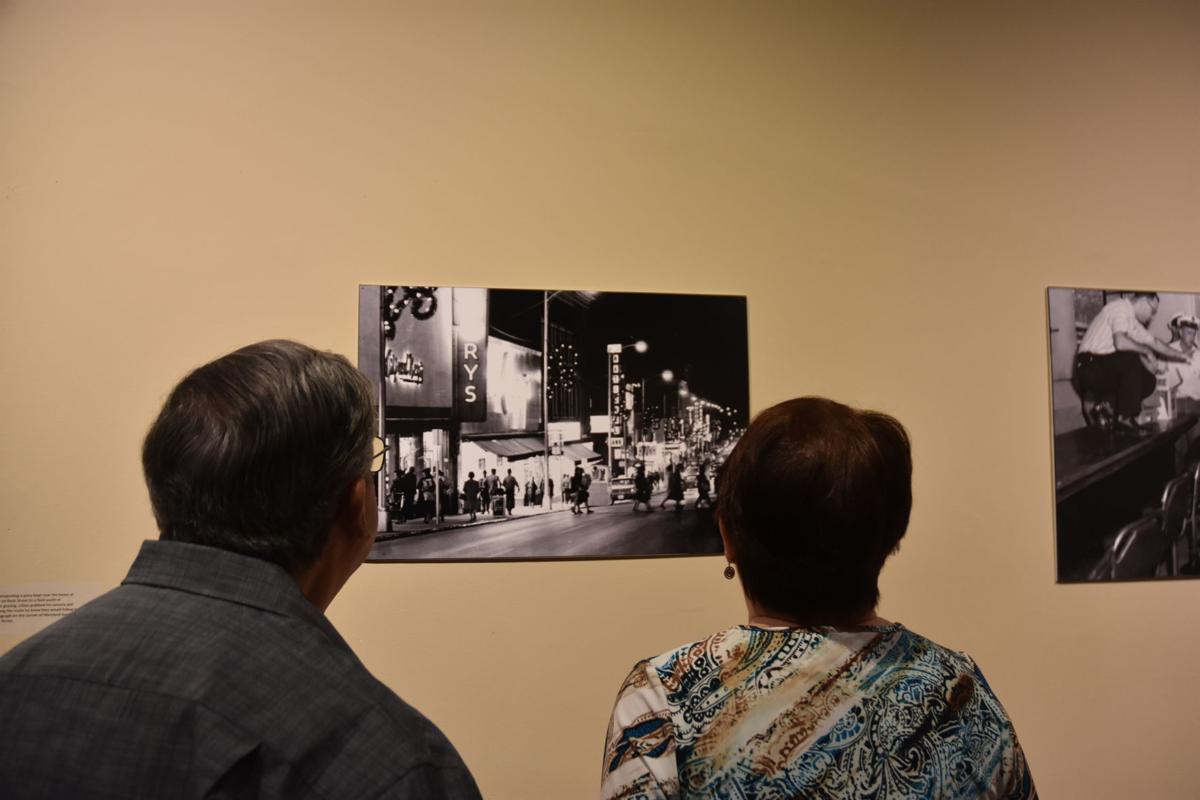 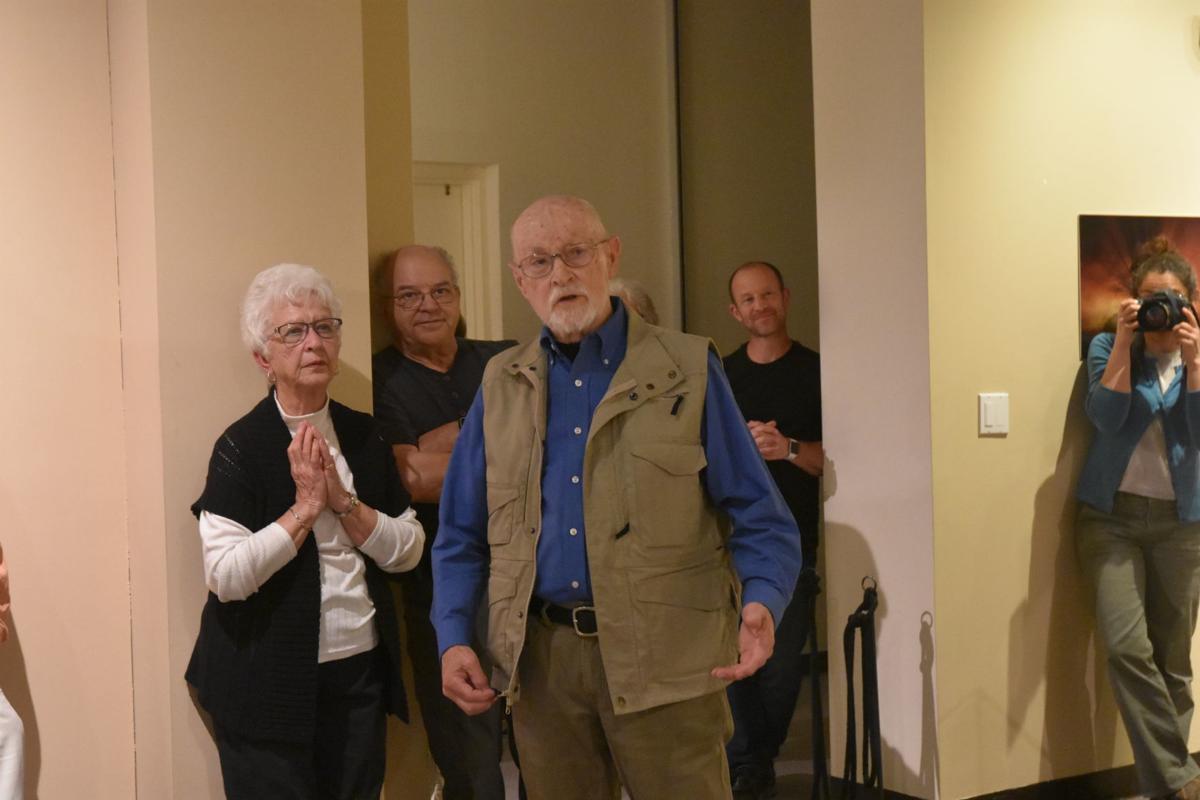 Former Daily News-Record photographer Allen Litten talks about his more than half a century career photographing the Valley on Thursday during the opening of his exhibit at the Harrisonburg-Rockingham Historical Society’s Heritage Museum in Dayton. 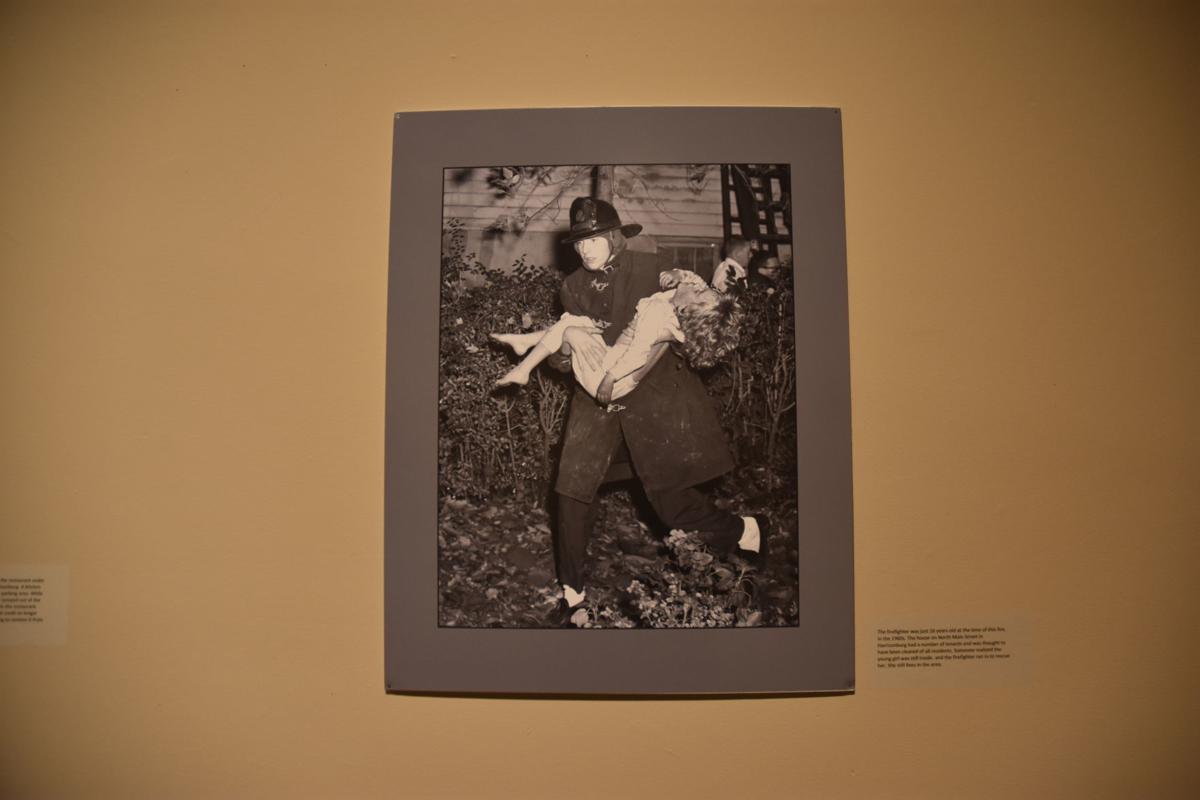 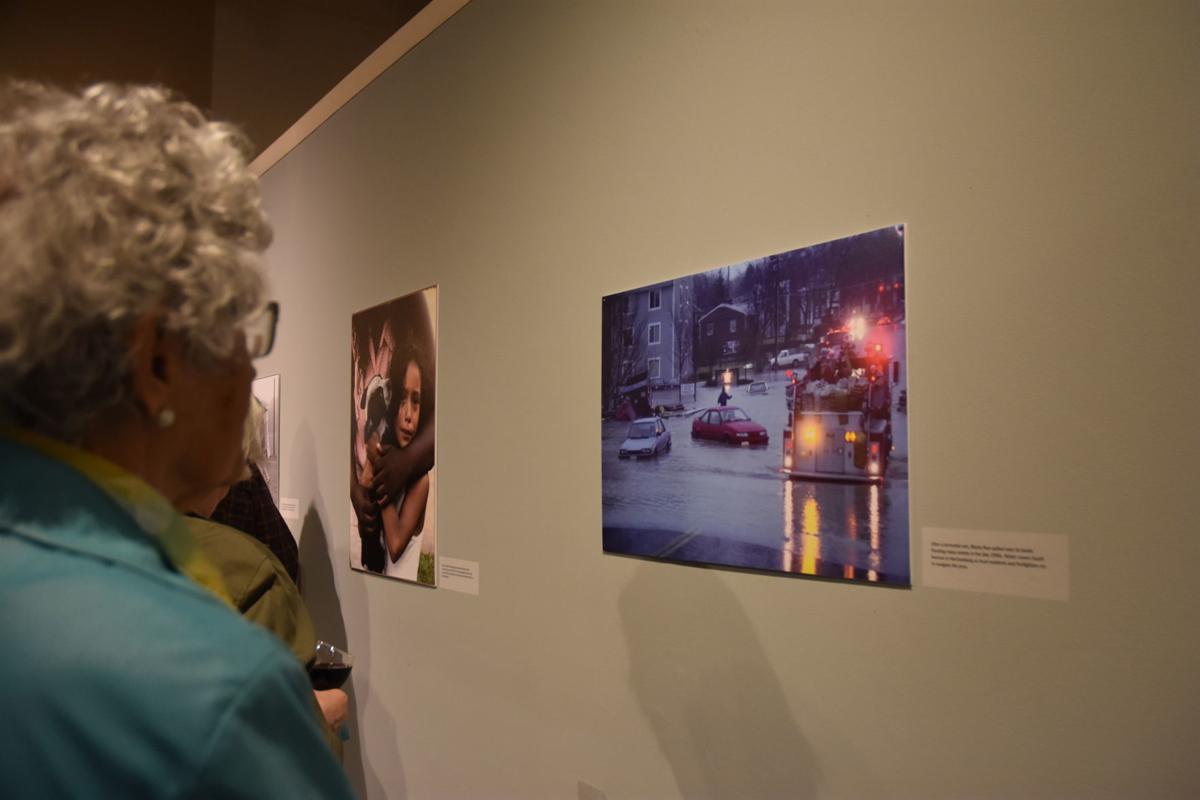 Guests view a photo of a flooded street taken by former Daily News-Record photographer Allen Litten at the Harrisonburg-Rockingham Historical Society’s Heritage Museum in Dayton at the exhibit opening on Thursday.

Former Daily News-Record photographer Allen Litten talks about his more than half a century career photographing the Valley on Thursday during the opening of his exhibit at the Harrisonburg-Rockingham Historical Society’s Heritage Museum in Dayton.

Guests view a photo of a flooded street taken by former Daily News-Record photographer Allen Litten at the Harrisonburg-Rockingham Historical Society’s Heritage Museum in Dayton at the exhibit opening on Thursday.

DAYTON — Former Daily News-Record photographer Allen Litten documented life in the Shenandoah Valley through the lens of his camera for more than half a century.

Throughout his prolific career, Litten was on the scene to document fires, floods, riots and the most important events of the community in the latter half of the 20th century, while also artistically capturing moments of daily life.

A collection of Litten’s photography is on display at the Harrisonburg-Rockingham Historical Society’s Heritage Museum in Dayton in an exhibit titled, “Allen Litten: The Valley’s Observer.” The exhibit opened at the museum Thursday.

“Allen has been taking pictures of the community for a very long time and his body of work is a visual history of our community,” said Penny Imeson, executive director of the Heritage Museum.

Daniel Robinson, the associate director of James Madison University’s Institute for Visual Studies, was brought on as the guest curator of the exhibit.

“Allen is a key figure in the photographic history of Harrisonburg,” Robinson said. “He has witnessed, as a way to communicate, the happenings in our area for well over half a century and that kind of longevity is just really rare and especially to maintain that kind of quality throughout. He never lost his touch. He never lost his eye.”

Litten began working for the DN-R in the early 1950s when he was in high school. He also took photos for the fire department.

“I started out in the mailroom and then moved to the press,” he said. “In 1957 when the photographer left, the manager asked if I wanted to join. I was the only [photographer] for years.”

He got his first camera when he was 10 years old, but Litten said he never thought he would pursue photography to the extent that he did.

The first camera Litten remembers using at the paper was a 4X5 camera. Over the decades, Litten had to adapt to the ever changing technology. He remembers when the DN-R ran its first color print during the 1960s.

“That was unheard of by papers our size,” Litten said.

Although covering fires, crime scenes and other dramatic events was difficult, Litten said he would always try to focus on getting a shot that would be compelling to readers.

“I tried to add the human element,” he said.

Litten’s exhibit features a variety of subjects, from shots of agricultural landscapes and farm buildings, to black and white shots of downtown Harrisonburg buildings and businesses.

“There are many pictures that give us the ‘who, what, when, where, why,’ but then we get to see the more artistic and more experimental pictures that bring emotion, that have some feeling and atmosphere rather than just the action of the event of the day,” Imeson said.

One of the most striking photographs in the exhibit is a shot of a barn engulfed in flames while a man in the foreground is calmly watering his rose bushes. It was a planned burn for firefighter training, Litten said, off Va. 42 north of Harrisonburg.

The man was concerned that the heat and debris from the inferno would damage his rose bushes so, the firefighters hooked up a line for him to shower his plants. Litten guesses that the photo was taken around 20 years ago. That land is now a town home development.

“It’s this incredible action scene, but it’s completely different than what you would expect. It looks really calm,” Robinson said. “That contrast is really interesting and I think that’s a hallmark of Allen’s work. He has a very strong eye for the visual contrasts and juxtapositions.”

Litten witnessed the fire that erupted from the bathroom of Jess’ Quick Lunch in Court Square in the 1980’s that was a suspected arson. Unsatisfied with his shots from the ground, Litten climbed to an upper-level floor of the National Bank building across the street to capture the billowing smoke from above.

“I went up and rattled doors until I finally found [one open],” he said. “I don’t remember whether it was a restroom or just a small office space … [but] I went in, opened a window and shot a few shots and went back down to the ground.”

Litten also had an eye for visual puns. A photo in the exhibit shows the roof of business called “Custer’s Last Stand” literally about to collapse.

Litten, 83, retired from the DN-R in 2004, but he has continued to photograph the Valley beyond his 53-year career at the newspaper. He now volunteers as a photographer for the Harrisonburg Police Department’s police auxiliary.

“Allen Litten: The Valley’s Observer” will be on display in the Heritage Museum, located at 382 High St., through the end of summer.

“It’s just a new way to look at the community,” Imeson said.