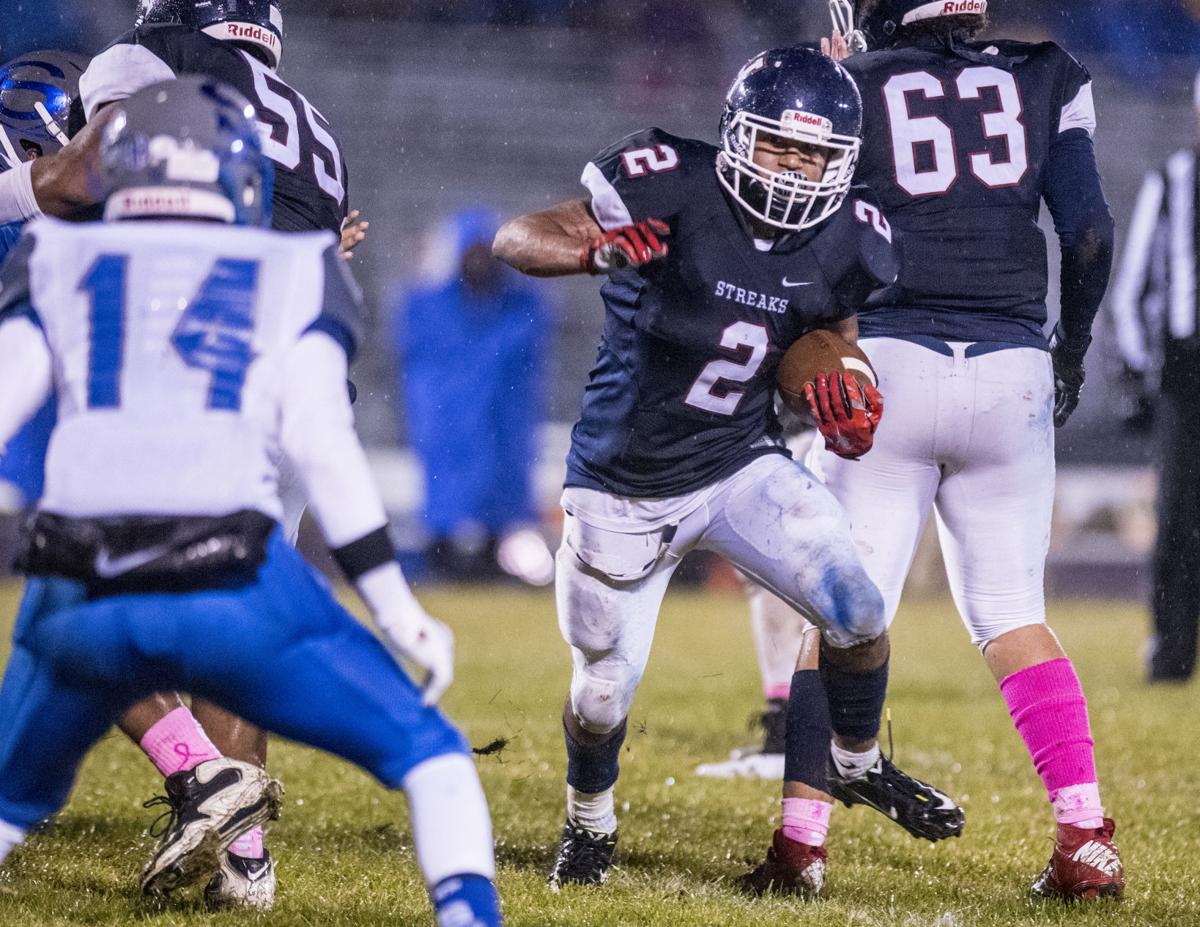 Harrisonburg running back Marcus Robinson-Jenkins finds a hole in traffic on a carry during a game against Spotswood in 2018. 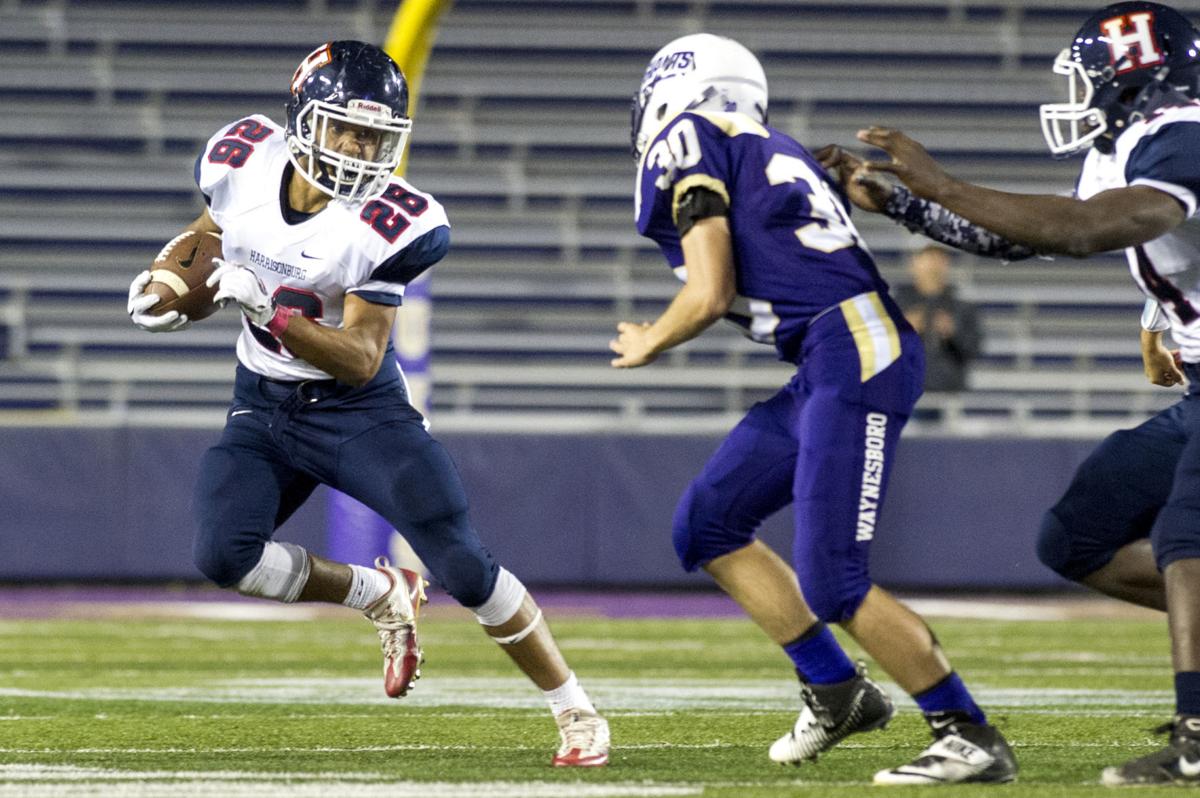 Harrisonburg’s Marcus Robinson-Jenkins runs past Waynesboro defender Jared Gaylor during the second quarter of a game against Waynesboro in 2017 at JMU’s Bridgeforth Stadium.

Harrisonburg running back Marcus Robinson-Jenkins finds a hole in traffic on a carry during a game against Spotswood in 2018.

Harrisonburg’s Marcus Robinson-Jenkins runs past Waynesboro defender Jared Gaylor during the second quarter of a game against Waynesboro in 2017 at JMU’s Bridgeforth Stadium.

Marcus Robinson-Jenkins has been in Harrisonburg his entire life.

The former Harrisonburg standout running back didn’t move away from the city for the first time until June of 2019 when he moved to Annapolis, Md. to begin his college career with the Naval Academy. That move, he said, was beneficial.

But when his first year ended after playing for the Naval Academy Prepatory School and gaining valuable experience, Robinson-Jenkins said he began discussing with his father, Terrell Jenkins, the possibility of other options.

“There were a bunch of factors, honestly,” Robinson-Jenkins said. “It just had to do with the football aspect. I am more of a spread back. That offense wouldn’t have been as effective for me because I can’t utilize all my skills.”

Robinson-Jenkins entered the transfer portal in June and interest quickly followed. On Friday, the 5-foot-10, 194-pound running back committed to Alabama State — a Division I program in the Southwestern Athletic Conference.

“I’m super excited,” Robinson-Jenkins said. “I can’t wait to get back to playing ball, especially with a new set of brothers. I’m going to make some new bonds, new friends and just ball out with my team. I’m going to work hard and earn what I deserve.”

During his time with the Blue Streaks, Robinson-Jenkins stood out with his unique vision and quickness out of the backfield. During an injury-shortened senior season due to a broken fibula that he suffered in a preseason scrimmage, Robinson-Jenkins ran for 640 yards and nine touchdowns on 84 carries this past season for the Blue Streaks. He also caught eight passes for 107 yards and another score in just six games.

In his junior season for HHS, Robinson-Jenkins led the Valley District in yards from scrimmage. He amassed 1,384 rushing yards on 130 carries — an average gain of 10.6 per rush — and 556 receiving yards on 21 catches.

He scored a district-leading 24 touchdowns that year, rushing for 17 of them, while reeling in first-team All-Class 5 Region D and All-Valley District honors. In 2016, he gashed opponents for 729 rushing yards on 111 carries (6.6 yards per attempt) while netting 17 scores, including a Valley-best 15 rushing TDs.

“I would definitely say his vision is his strength and he’s got a little jump cut that allows him elude people,” said former Harrisonburg coach Chris Thurman in February of 2019. “That’s something that he’s always really been able to do well.”

“It’s unbelievable,” Terrell Jenkins said at the time of Robinson-Jenkins’ commitment to Navy. “I’ve been coaching him since he was 5-years old up until he got to high school. We talked about this all the time. … Here it is and it’s unbelievable. It’s just hard work through family, friend and everyone that’s supported him along the way.”

Although his time at the Naval Academy was short-lived, Robinson-Jenkins said it was beneficial. He said he’s eager to head to a historically black college in Montgomery, Ala. as racial tensions around the country are at an all-time high.

“Outside of growing physically, I just have a better understanding of football,” Robinson-Jenkins said. “I became a student of the game. I learned a lot about how to read defenses, different coverages. My football IQ has gotten a lot better from being at the Divison I level for a year. I got used to the speed of the game. I just felt like it helped me develop as a football player and as a man.”

After being in Harrisonburg a majority of his life and maintaining a close bond with his family and friends at home, he said he’s ready for a new adventure with a team that has already began to make him feel comfortable.

“Those coaches just welcomed me in the first time I started talking to them,” Robinson-Jenkins said. “They welcomed me in like family and we connected really well. That was a big part. I met a lot of great people who supported me through this process. It just felt like home. I’ve been in Harrisonburg my whole life. It’s time for me to go see the rest of the world.”