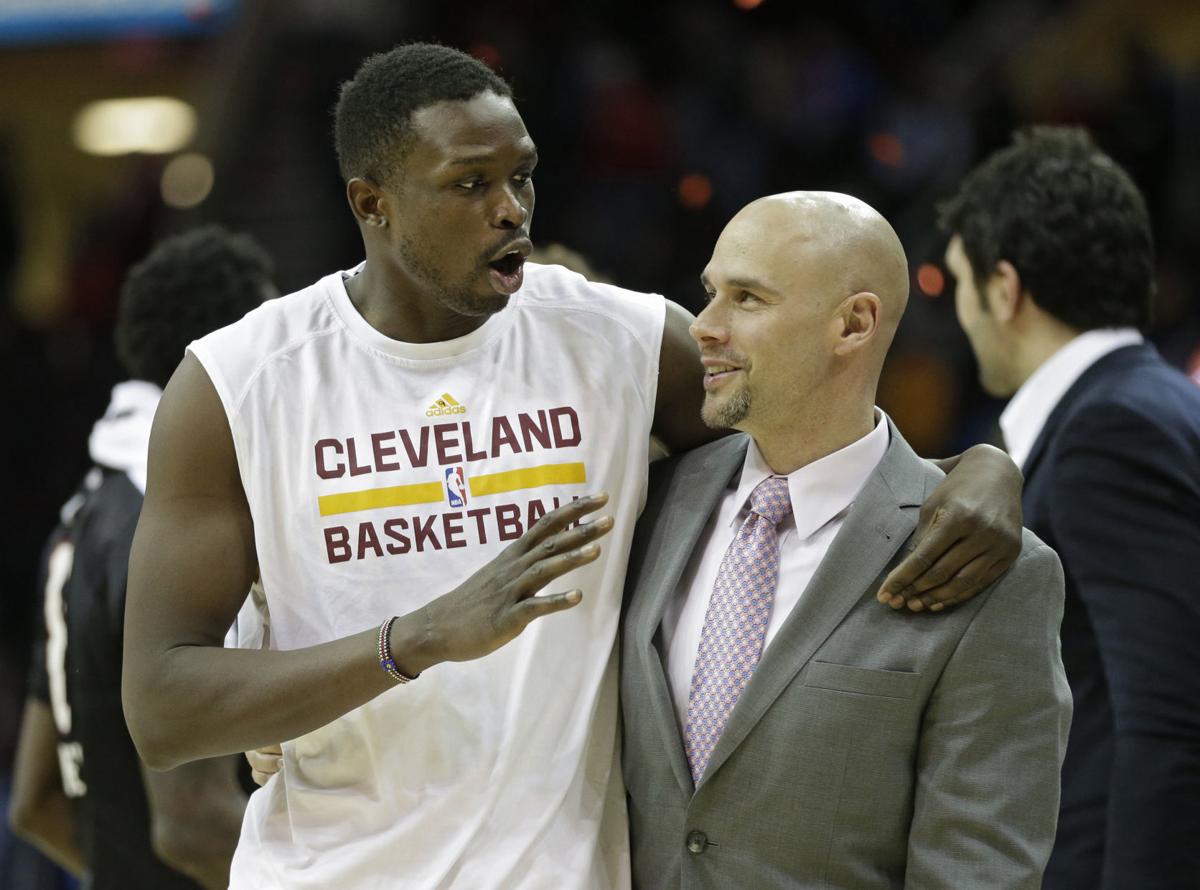 Former JMU assistant coach Josh Oppenheimer (right), here with player Luol Deng in 2014, returned to the NBA this season as an assistant with the Bucks. 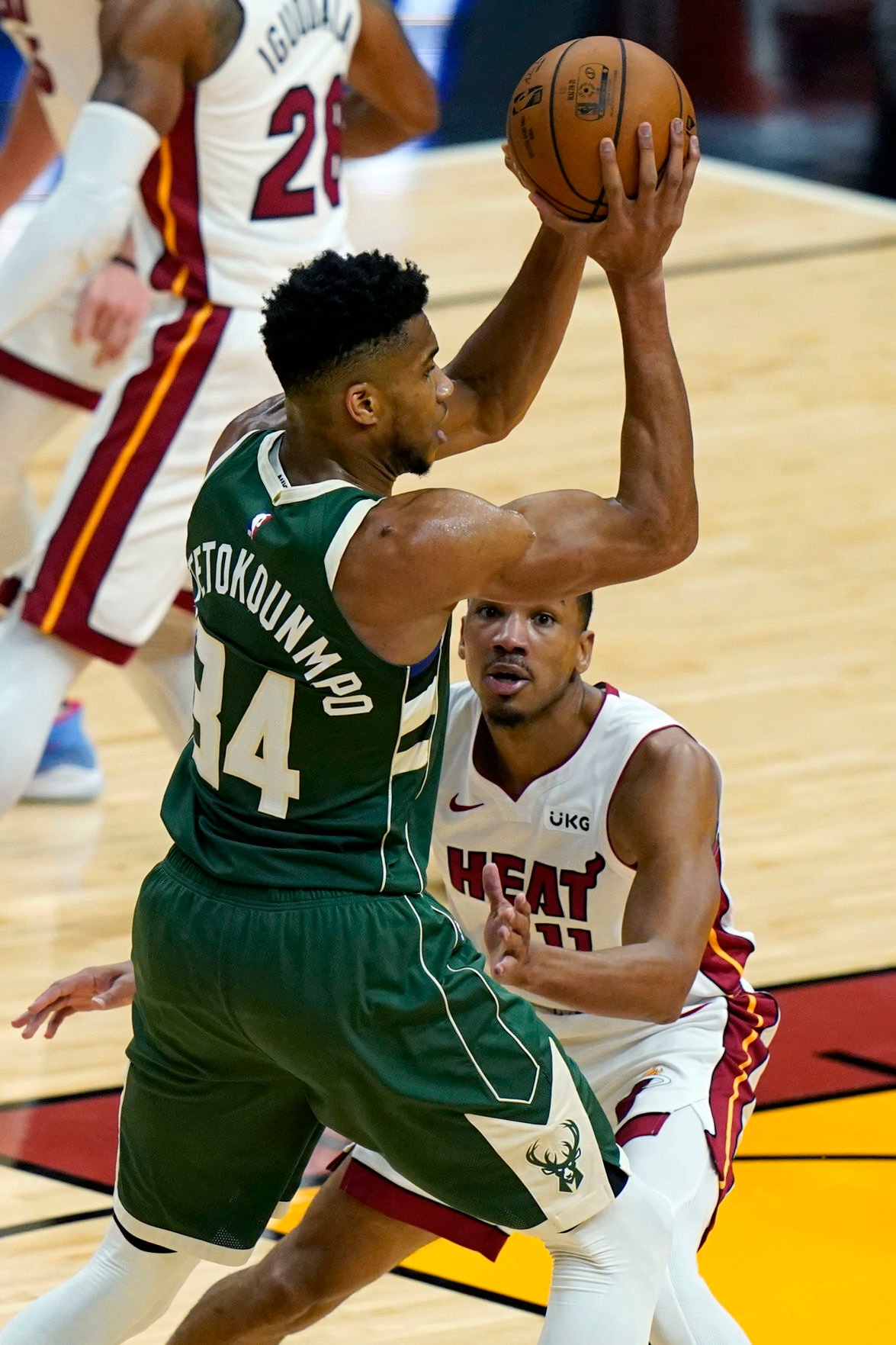 Giannis Antetokounmpo, the Bucks’ MVP, wanted former JMU assistant coach Josh Oppenheimer back in the NBA. The two trained together last year in Greece before the current NBA season began.

Former JMU assistant coach Josh Oppenheimer (right), here with player Luol Deng in 2014, returned to the NBA this season as an assistant with the Bucks.

Giannis Antetokounmpo, the Bucks’ MVP, wanted former JMU assistant coach Josh Oppenheimer back in the NBA. The two trained together last year in Greece before the current NBA season began.

The riot in Washington last week overshadowed on the national level a protest by the Milwaukee Bucks of the NBA over the shooting of Jacob Blake.

And the shooting in August of Blake hit close to home for former JMU assistant men’s basketball coach Josh Oppenheimer, who returned to the Bucks as an assistant coach in November.

The Bucks issued a statement on Jan. 5 – the same day it was learned the officer that shot Blake seven times would not face charges. The next day, Jan. 6, the hosts Bucks and Detroit Pistons took a knee for seven seconds after the opening tip.

“Seven seconds for the seven shots,” Oppenheimer, who grew up near Los Angeles, said this week.

Oppenheimer said fellow assistant coach Darvin Ham had been in touch with the Blake family and they encouraged the Bucks to play the game the day after the officer was not charged.

Blake was shot last year in Kenosha, less than 45 minutes from where the Bucks play their home games. “We have a lot of work to do” when it comes to racial justice, Ham told reporters.

“Black Lives have and always will matter equally to any other race in our country and world,” Oppenheimer wrote to the News-Record. “No human being should ever be treated the way George Floyd (in Minnesota in May) and Jacob Blake were. The police cars on the doors of the LAPD say ‘To Protect and Serve’ not to ‘Murder and Discount.’

“I am not perfect but coming from a single-parent household in Los Angeles I am nowhere, let alone an NBA coach, without the direction of African-American men and women. I owe my life to them and along with my mother and some of the coaches that I have had. So to see what is going on and has been going on for 400 years is disheartening. It has to change.”

Last week was just the latest challenge to an eventful year for Oppenheimer, who grew up in a part of the Los Angeles area where he said “99 percent” of the time he was the only White player on the court in pickup games.

He was part of the staff of former head coach Louis Rowe that was let go by JMU after the 2019-20 season – the fourth year in a row the Dukes ended with a losing record. Oppenheimer’s daughter, Nikki, remains a member of the women’s hoop team at JMU.

While his wife Adrienne stayed in Harrisonburg, Oppenheimer accepted an assistant position with the Bucks.

His wife played volleyball in college at Northern Arizona, where he played hoops after transferring from Rhode Island. He was an assistant for the Bucks from 2013-16 and was encouraged to return by standout Giannis Antetokounmpo to be part of the staff under Coach Mike Budenholzer.

“I got a call this summer from the Bucks,” said Oppenheimer, who turned 52 on Friday. “Was I willing to come back? Then I got a call from Giannis telling me he wanted me to come back. When you are told by someone like that he wants you to come back in the organization, working with him, that definitely makes you feel good and wanted. We have a longstanding relationship, working with him for years.”

A few days later he headed to Greece to work out for about seven weeks with Bucks star and MVP Antetokounmpo, who grew up there.

“The only negative was being away from your family for two months. My wife has been super supportive and she is excited about coming to Milwaukee” later this month, Oppenheimer said. “She is still in Harrisonburg. We were kind of waiting for COVID (to die down). There was a big uptick in Wisconsin. Like everyone, we were trying to navigate through it. I have not seen her in awhile.”

“She has been great. It is not easy being a coaches’ wife, as everyone knows. I can only go by mine. I can’t imagine one being better than my wife in this process. It is just an unbelievable culture they have here (with the Bucks). I am looking forward to seeing my wife,” he added.

Oppeneheimer welcomed the overseas trip to Greece, as he played as a pro in Israel and in minor leagues in the United State for several years.

But while he in Greece last fall, he was part of a lockdown in the country due to the pandemic.

Once the NBA season began, the former Harrisonburg resident had to follow the strict protocols in place due to the virus. First-place Milwaukee is 8-4 after a win Wednesday at Detroit and was slated to host Dallas on Friday.

Oppenheimer said following the protocols has been taxing though his team has been lucky staying healthy. Washington had games Wednesday and Friday called off due to the virus.

“Like nothing else you could ever imagine,” he said of the mandates. “Getting through every day and getting through virus free is an accomplishment. We are tested every day. We get a rapid response test and then get the PCR test, which is sent to New York. Even on off days (from games and practices), we have to come in and get tested.”

Oppenheimer has kept in touch with his JMU roots while back in the NBA.

He watches men and women games online when he can and said he has a very good relationship with JMU senior Matt Lewis, the preseason player of the year in the Colonial Athletic Association.

The Bucks’ assistant also keeps in touch with Rowe and other former members of his staff, including Eric Wagenlander — now on the staff at Virginia Tech.

Oppenheimer grew up in suburban LA, was a ballboy for games at UCLA and went to high school in Sherman Oaks. He had a front row seat to watch some great teams and players in regular-season and NCAA tournament contests, including Patrick Ewing and Georgetown, Rick Pitino as a visiting coach with Boston University and some of the great UCLA teams of that era.

He also played in his neighborhood and in junior high with several future basketball standouts at the college and pro level, including Chris Mills — a first-round pick of Cleveland in 1993 — Sean Higgins and many others.

“I was so lucky to grow up in the era I did in L.A. in basketball and the people I had access to,” Oppenheimer said. “I was (10) years old when Magic Johnson was drafted by the Lakers. I was there for all of Showtime” with the perennial NBA powerhouse.

After high school, he played briefly at Rhode Island for former coach Tom Penders — who left soon after for Texas.

“I thought he was ahead of his time in playing a running, open style,” Oppenheimer said of Penders, who later coached at George Washington.

After playing in college and overseas, Oppenheimer was an assistant at Duquesne, Delaware, DePaul and Kent State. He has worked in the NBA under Coach Mike D’Antoni, a native of West Virginia, in Houston with the Rockets.

“He was an influence on me … I believe (he) will end up in the Hall of Fame,” said the former JMU assistant. “Another guy who instilled confidence in his players.”

Now Oppenheimer — known as a shot doctor — is trying to do that once again with the Bucks in a season they are not allowing fans. The NBA put down even stricter protocols earlier this week.

“It is like nothing I have experienced,” he said of nearly-empty arenas. “I can’t wait for it to end” with fans back.