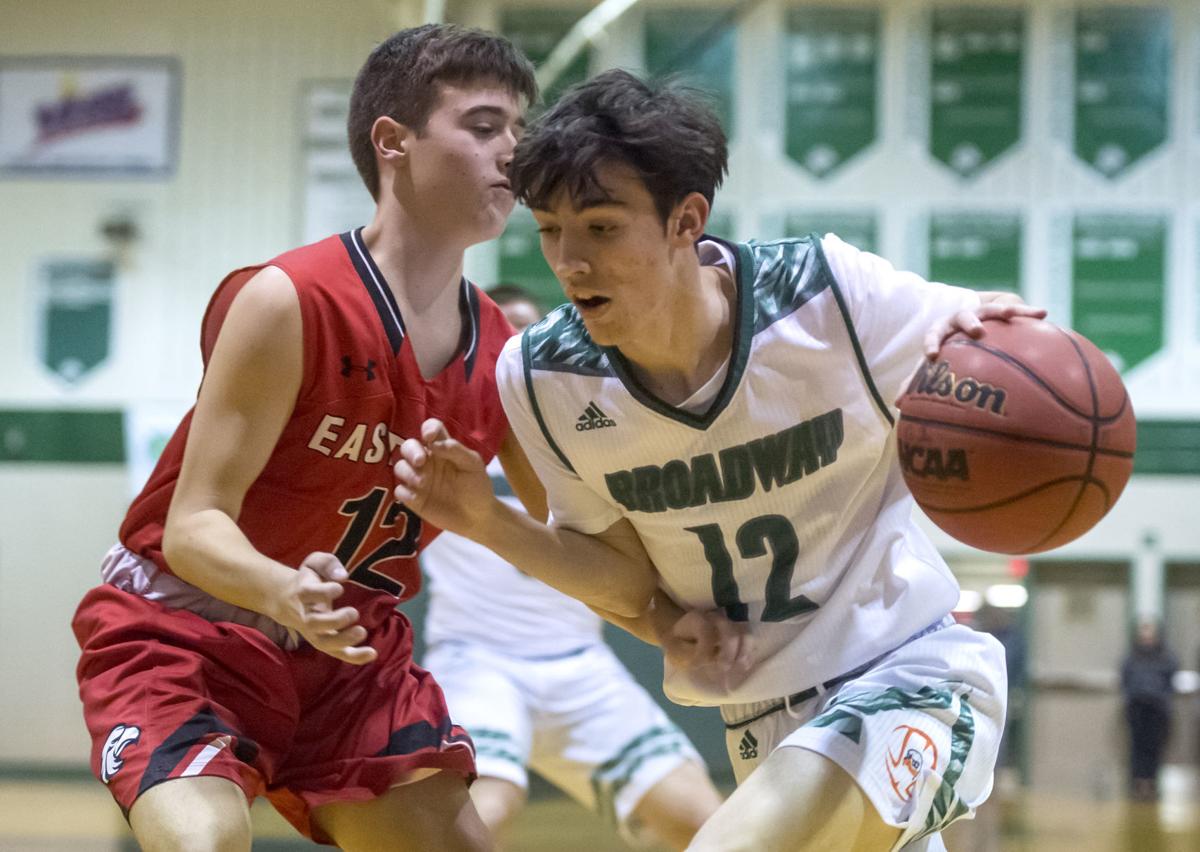 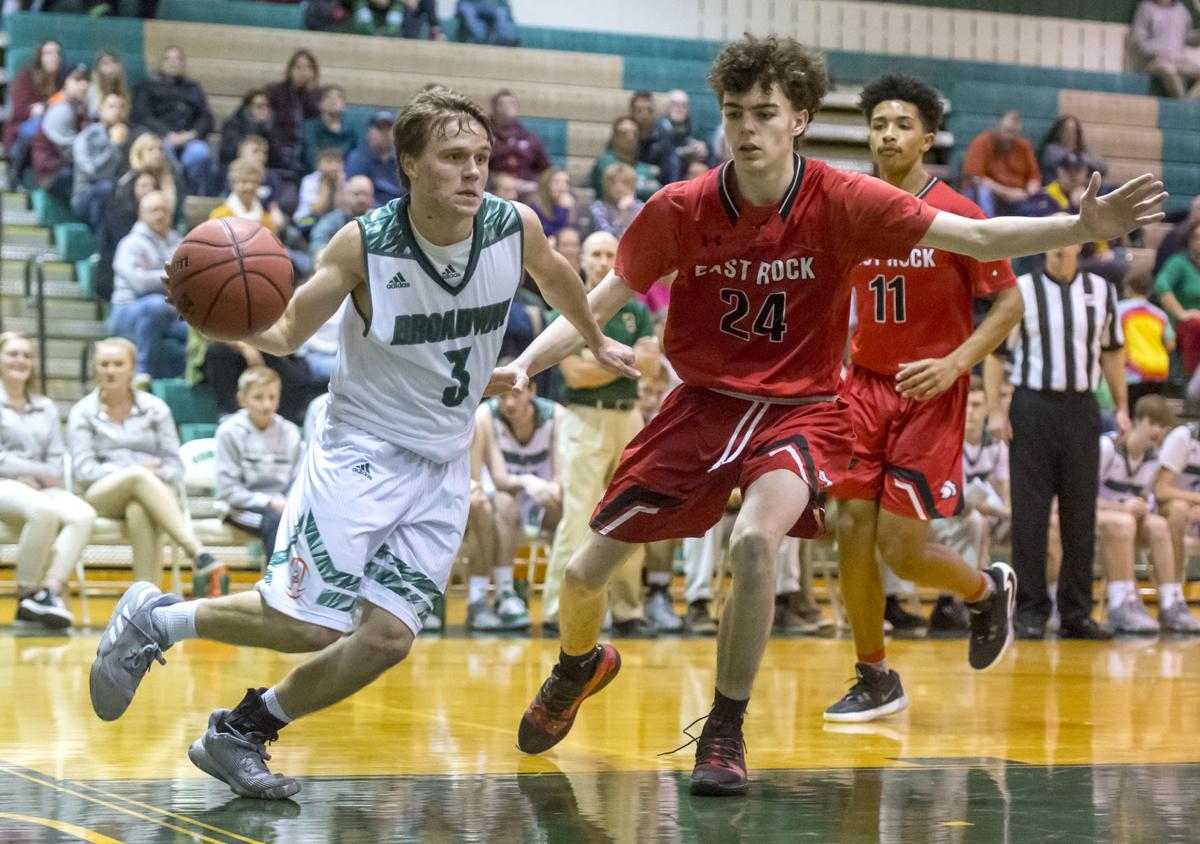 Braodway's Jaxon Jameson hooks a pass to a teammate away from East Rockingham's Da'rius Lam. 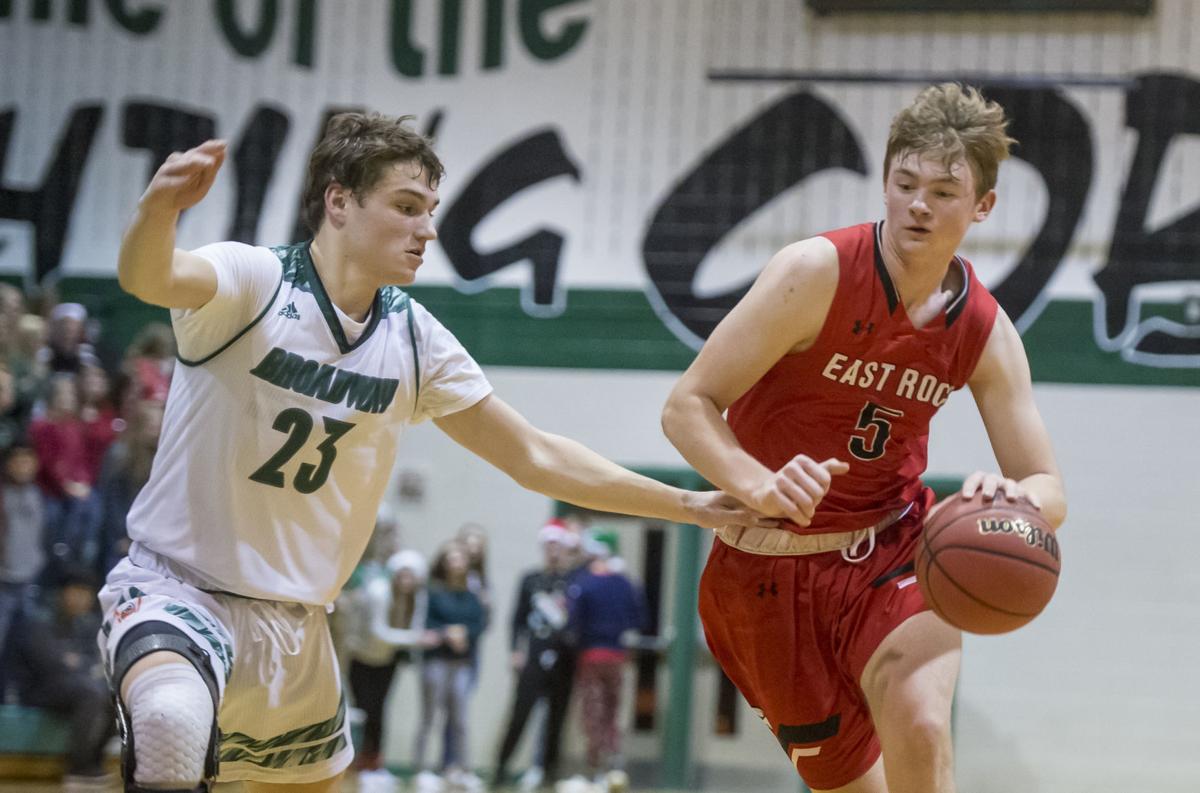 Braodway's Jaxon Jameson hooks a pass to a teammate away from East Rockingham's Da'rius Lam.

BROADWAY — Standing outside the Broadway locker room with a smile on his face, Jaxson Jameson said maybe all those not-so-pretty wins early in the year paid off.

“It feels great,” said the Gobblers senior point guard. “A lot of those close games against teams we shouldn’t have been close with really helped us prepare for how we needed to be in this situation. We were able to focus and overcome in the late-game situation.”

Nate Tinnell scored 16 of his game-high 18 points in the second half as Broadway pulled away and earned its biggest victory of the season with a thrilling 60-51 non-district win over East Rockingham in boys basketball action at BHS on Wednesday.

It marked the first loss for the Eagles this year and was the first start-to-finish performance Gobblers coach Dwight Walton said he was pleased with this season.

“The piece that I felt like we haven’t been doing is the details, especially defensively,” Walton said. “I thought that while having this little break that we needed, that’s what we really worked hard on. Hopefully this will be a win that’ll help us understand where we’re coming from as coaches. I thought we really executed and stay tuned in for 32 minutes.”

Broadway’s effort defensively was the story of the evening as the Gobblers stuffed the lane and forced normally up-tempo East Rockingham to settle into the halfcourt.

Despite scoring just six points in the opening quarter, however, the Eagles somehow managed to hold their own defensively and went into the half with a 21-19 lead.

“I have to give a lot of credit to Broadway,” ERHS coach Carey Keys said. “Coach Walton had a great plan. They kind of just packed the lane and really made us make tough shots inside and live and die by the 3 and then we didn’t shoot it well outside.”

East Rock held one more lead at 24-21 early in the third, but that was its last.

Tinnell exploded in the third quarter for 10 points and Gage Williford, Caleb Williams and Jameson all came up big big buckets to send the Gobblers into the third up 41-34.

“At halftime, I knew I only had two points and wasn’t being aggressive,” said Tinnell, who also added 12 rebounds. “I knew I had to come out and be aggressive and take whatever came to me. My teammates were getting the ball and I was finishing.”

Tinnell was the most notable difference in Broadway’s second-half efficiency.

Jameson and Williford both did a sound job of drawing East Rockingham defenders to the top of the lane and then finding Tinnell or Wes Delawder for open buckets.

“We were trying to mix our defenses,” Keyes said. “From what I could see, it was just bad rotations and bad communication. They executed well. All credit goes to them.”

Williford finished with a team-high seven assists while Jameson had a solid all-around line of 10 points, five rebounds, five assists and a pair of steals for the Gobblers.

“We saw areas we could attack,” Walton said about the offensive plan. “They listened to what we said. That’s what I’m most proud of. They weren’t sleeping in the film sessions. They were actually taking it in. I saw them work hard this last four or five days.”

One player that didn’t have as big of a night as he’s accustomed to offensively is senior guard Caleb Williams, who had nine points, but played a big role defensively.

Williams was dealt the task of defending East Rock forward Tyler Nickel for a majority of the night and did well, holding the 6-foot-7 standout to a season-low 11 points.

“Caleb — I don’t think he could have watched any more tape than he did or listened to me more,” Walton said. “I thought he did everything he could. He used his strength and his basketball IQ. He sacrificed to work hard defensively tonight. That’s huge.”

The Eagles got as close as two on multiple occasions in the fourth, but Broadway responded each time with buckets from Tinnell, Delawder or Jameson late.

By the time the final buzzer sounded, the BHS bench was exploding with joy.

“It was crazy,” Tinnell said. “We knew we had to come out and play big, try to get a big win. They’re a good team. We’re just really happy with the outcome in that one.”

“We didn’t do a great job getting out in transition where we could get in rhythm,” Keyes said. "Usually, we use our transition game to get in a rhythm and it was just a halfcourt grinder. Right now, that’s not our forte by any means. They’re a tough-nosed team.”

McNair said the loss is one that the Eagles have to learn from moving forward.

“You just have to move on,” the ERHS point guard said. “You have to cancel out all this stuff when you’re playing. You can’t worry about the fans, the refs, all of that. You just have to play. We just have to learn to do that whenever things aren’t going our way.”

Williford and Delawder had 11 points apiece for the Gobblers (6-1) in the victory.

It was a well-balanced performance that showcased Broadway’s full potential.

“I think this is a really good team,” Walton said. “It’s just a matter of whether they were going to be disciplined enough to focus on the little details and do what we needed to do to win a big game against a really good team. They proved to me they can do that.”

After a tough road win a week earlier at Fort Defiance, the Gobblers left Don Landes Gymnasium that even dejected and with the look of a team still learning on the fly.

And while one win isn’t everything, Jameson said, it was something to build off.

“It means a lot,” JAmeson said. “It really boosts our morale and kind of sets the tone for the kind of team we are. It gave us a platform to prove ourselves and how we want to play the rest of the season.”