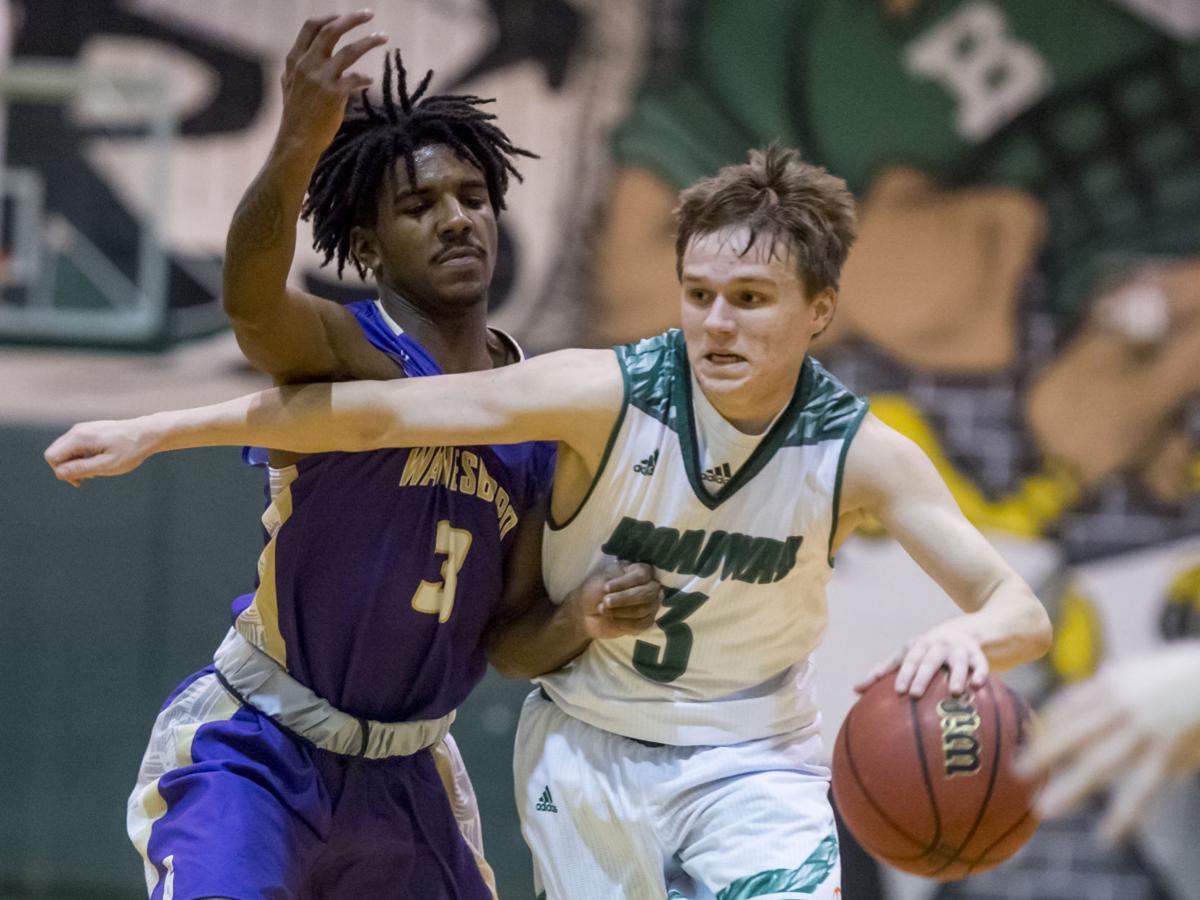 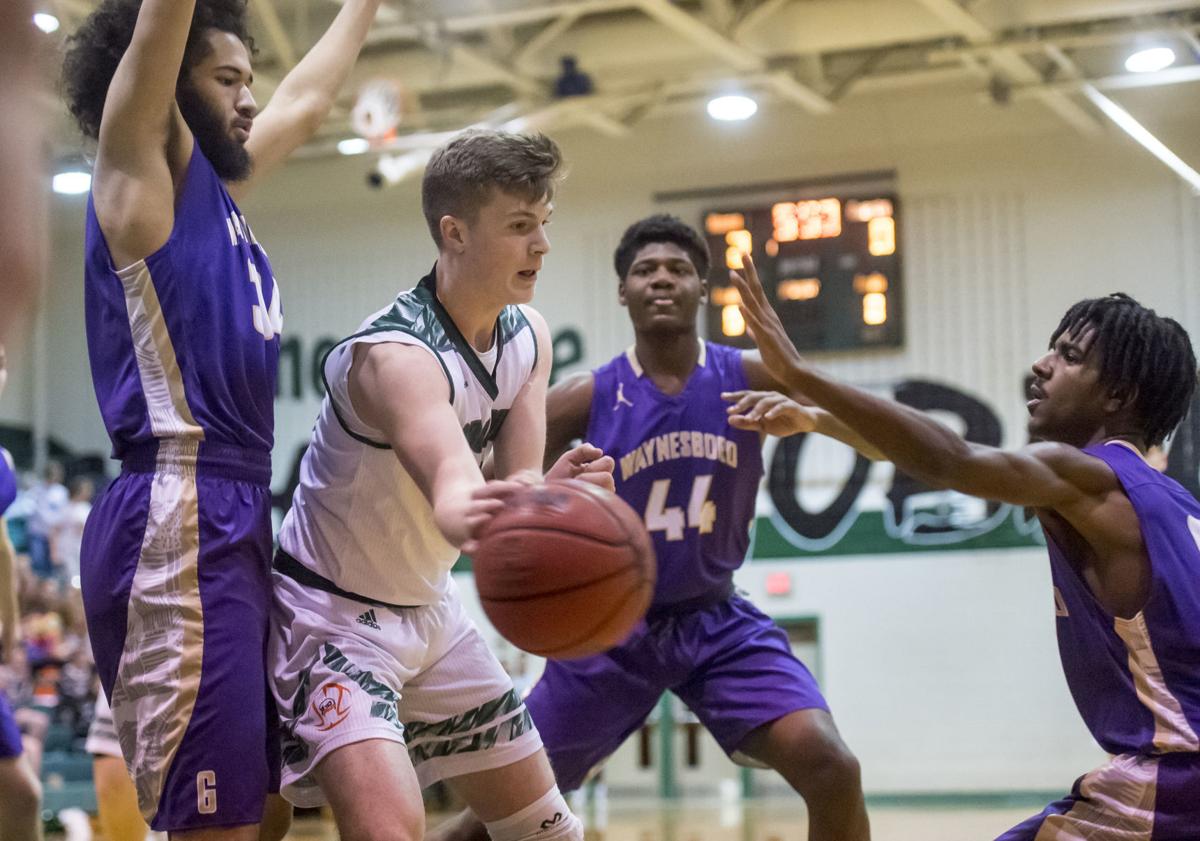 Broadway's Nate Tinnell passes the ball out of trouble as he gets boxed in by Waynesboro defense. 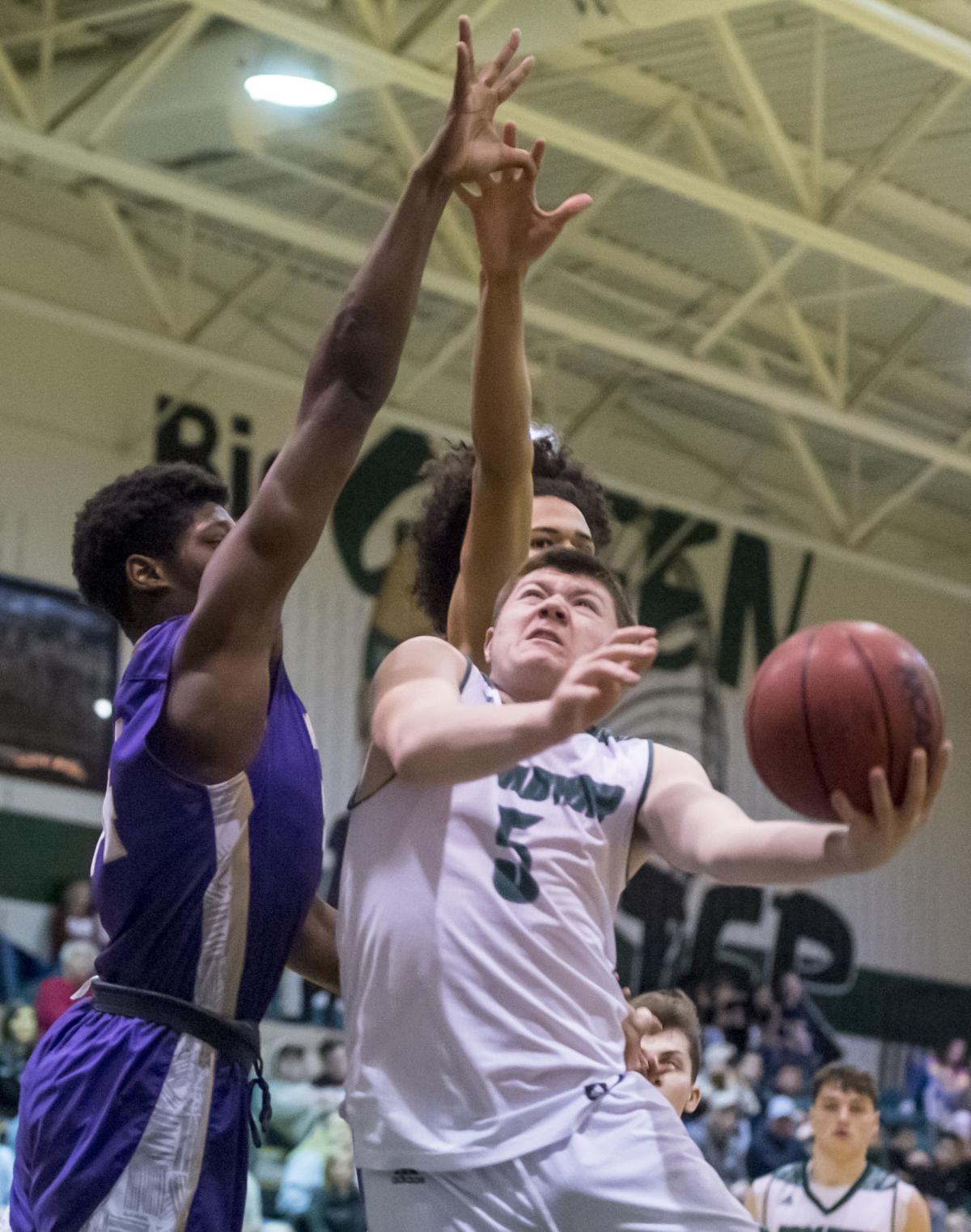 Broadway’s Wesley Delawder goes up for a shot around Waynesboro’s Samir Moore and Damien Fisher.

Broadway's Nate Tinnell passes the ball out of trouble as he gets boxed in by Waynesboro defense.

Broadway’s Wesley Delawder goes up for a shot around Waynesboro’s Samir Moore and Damien Fisher.

BROADWAY — With teammates Caleb Williams and Nate Tinnell both fouled out, Broadway senior point guard Jaxson Jameson did what any experienced veteran would do.

The 5-foot-8, four-year starter took over offensively in the fourth, effectively getting into the lane of the Waynesboro defense and hitting 14-of-17 free throws for the contest.

The result was the third-seeded Gobblers earning a 65-56 win over the sixth-seeded Little Giants in the Valley District boys basketball semifinals at Broadway on Friday.

With the win, Broadway advances to the semifinals Monday, where it’ll take on county rival Turner Ashby at 7 p.m. with a berth in the Region 3C tournament on the line.

“Any postseason win is a good win,” said Jameson, who finished with a game-high 21 points in the victory. “Those games are always competitive because no one wants to lose in this situation. Playoffs get physical. People want it more. Waynesboro has always been a physical team and we have to match their physicality inside with those big guys. I thought we did a pretty good job and came out with a really good win.”

The game was physical from the start, but a hot shooting start for Gobblers guard Caleb Williams helped Broadway quickly build a double-digit lead and go into the half up 31-19.

But Waynesboro, who continued to play without head coach Sidney Diggs, showed the type of fight that it has all season as it simply wouldn’t go away the entire second half.

“It was hard to get into a flow,” said Gobblers coach Dwight Walton, whose team shot 35 free throws in the game. “You kind of felt like we were taking control there in the first half and then we get hampered with foul trouble. We were in a different rotation. They did a good job fighting back and then it was anybody’s game again with a couple of shots.”

The Little Giants got as close as four when they went on an 11-0 run, highlighted by 10 points from guard Luke Young, but Jameson hit a pair of free throws that gave Broadway some breathing room and put the home team up 44-38 entering the fourth.

In that final frame, Williams and Tinnell both fouled out and Waynesboro took advantage, getting within five on a nifty traditional three-point play from Young.

“It was definitely tough,” said Williams about being forced to watch most of the fourth. “When playoffs start, everyone is 0-0. I wanted to be in with my teammates because we’ve worked so hard to get to this point. It was really tough sitting on the sideline.”

With Tinnell and Williams on the bench, the Little Giants were able to force the Gobblers into several turnovers as Walton had to go deeper into his bench than he usually does.

“When we really got in foul trouble, I give it to their guys,” Walton said. “They came in and took it hard to the basket like they did all night long, which I anticipated. You have to give it to them. There were probably some guys pretty nervous. There were guys playing minutes they don’t normally play in unfamiliar situations. That’s valuable experience that you can’t simulate. You hope that stuff will pay off in the long run.”

Jameson’s 21 points led the way for Broadway (16-7) while Williams had 19, Wes Delawder finished with 14 and junior guard Gage Williford chipped in with five.

For Waynesboro (7-16), Damien Fisher had 21 points while Young finished with 18.

“When I was little, I never thought I’d get to this point,” Williams said. “When it comes to this time, you have to hit shots. Me and Jaxson and other guys are pushing each other to make sure we can hit shots down the stretch and hopefully keep this thing rolling.”

Now the Gobblers must turn to their attention to the fifth-seeded Knights, who upset fourth-seeded Rockbridge County on Friday and are a team playing well as of late.

“We have to defend as well or better than we did at their place a week ago,” Walton said. “If you give them comfortable shots, you’re putting your neck on the chopping block because they shoot the ball well. We’re going to have to come with energy and a game plan and people are going to have to be ready to defend. That’s the No. 1 thing.”

Jameson said he’ll continue to play as hard as he can on a nightly basis, much like his fellow seniors did with him on Friday, as the Gobblers continue their postseason run.

As long as he’s still in the Broadway uniform, he’s not taking anything for granted.

“Any night could be your last,” Jameson said. “You go out there, have fun. But you have to be locked in and focused. You can’t take breaks in this situation because every game matters.”