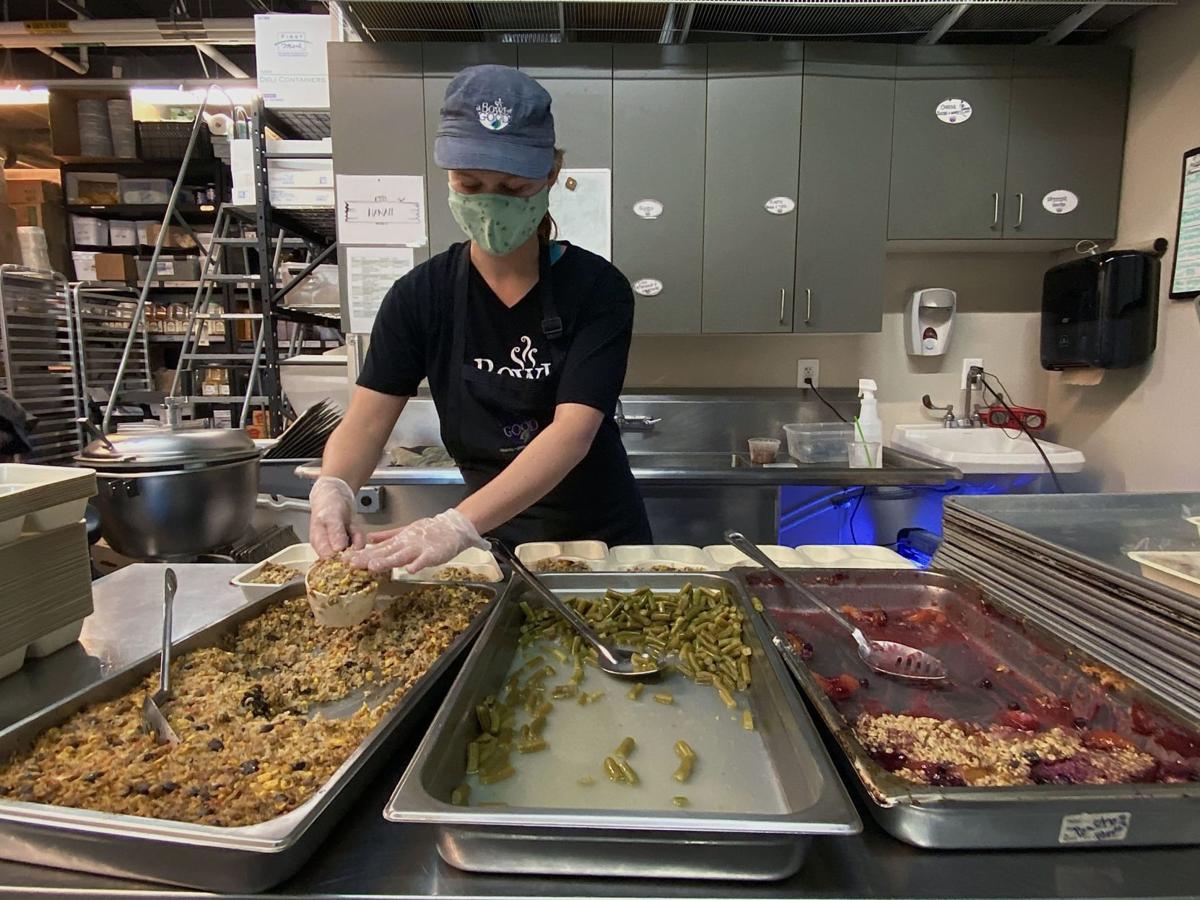 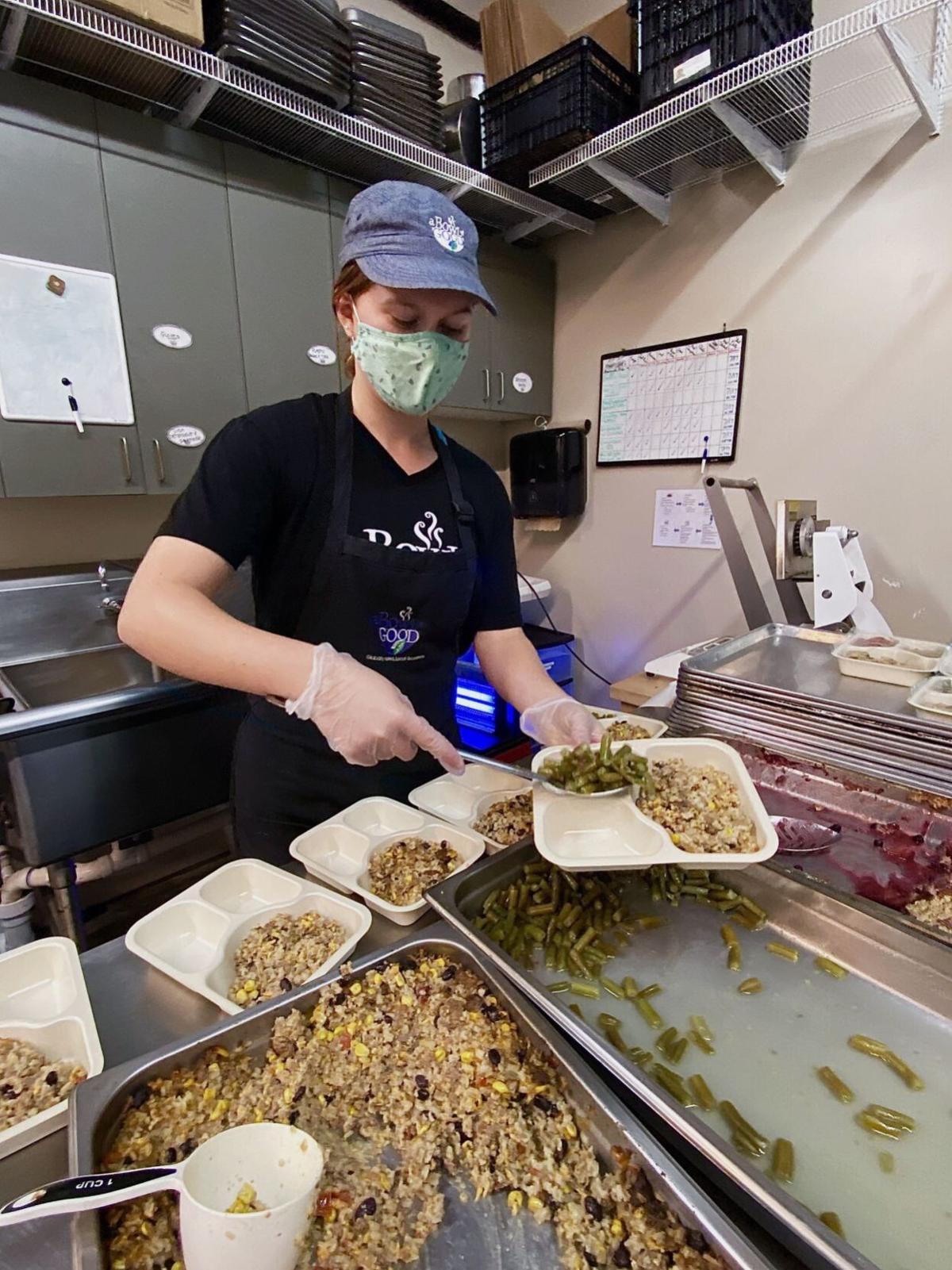 Every Monday morning, A Bowl of Good operates like a mullet: business in the front, party in the back.

While the front-of-house workers serve globally inspired meals out of the cafe, the kitchen prepares a week’s worth of meals for 150 strangers before lunchtime.

A Bowl of Good began partnering with Valley Program for Aging Services in October to provide healthy, hardy, local-when-viable sourced meals for Meals on Wheels.

At first, the responsibility of the meal provider was to deliver five days’ worth of bulk meals to senior facilities for distribution. When COVID-19 struck, the traditional means of senior services was flipped on its head as the seven local senior centers shut down to reduce contamination risks and meal needs increased to seven days a week.

“We can only risk contact with our homebound folks once a week. They came up with ideas of how we could do that, how they could prepare and package food, so folks wouldn’t have packaged meals that were not, for lack of a better word, TV dinners,” Schaff said.

A Bowl of Good owner Katrina Didot said the cafe prides itself in maintaining a reputation of using largely locally sourced ingredients, and Meals on Wheels packaged entrees consist of the same quality while moving away from culturally influenced dishes to more classic flavors like pulled pork with sauerkraut and squash casseroles.

Over 1,000 meals are prepared at the kitchen every Monday and picked up by volunteers who run 14 routes in the area, mostly through Harrisonburg and Rockingham County. A Bowl of Good also prepares three days of meals each week — about 400 meals — for Augusta County clients, and staff also provides meals for other areas, such as Rockbridge County, when necessary.

Previously, qualifying conditions to receive Meals on Wheels were to be 60 and older, homebound and unable to shop for and prepare meals, but the Administration for Community Living qualifies any person 60 and older as homebound during a major disaster declaration.

Both Didot’s mother-in-law and her sister live in Didot’s detached basement space and receive Meals on Wheels because they are unable to prepare meals for themselves. Didot said “it’s a gift” to see the finished products and take into account their feedback to ensure the meals are high quality.

“If they don’t like it, we don’t serve that meal again. I’m thankful to see both ends,” she said. “How the elderly eat matters to me, and I’m a big believer in how we eat influences how we feel.”

Mia Olsen is the Harrisonburg-Rockingham County senior center director who works as a liaison between VPAS volunteers and A Bowl of Good to provide Meals on Wheels to clients. Olsen said the partnership has provided a seamless transition for continued support to the aging population, and she sees the gratifyingly positive impact Meals on Wheels is having on every run.

During the dramatic decrease of sales at the peak of pandemic fears, Didot said, the partnership with VPAS was a blessing.

“It started a steady revenue stream that didn’t have a whole lot of margin. But when COVID came, we valued it very highly. … The cafe sales drastically dropped, but we were still able to maintain Meals on Wheels,” she said.

Schaff said Meals on Wheels, more than ever, is a valuable source of personal contact to aging people in isolation, but the partnership with the Harrisonburg cafe adds a new level of care and consideration being shared with its clients.