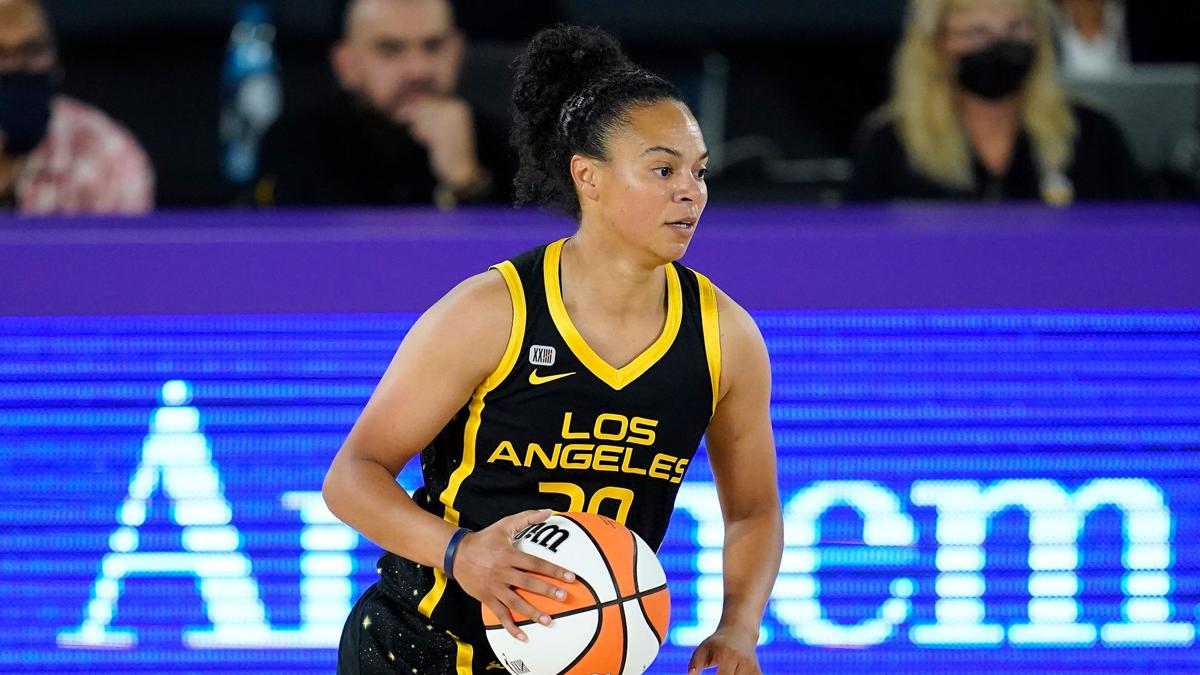 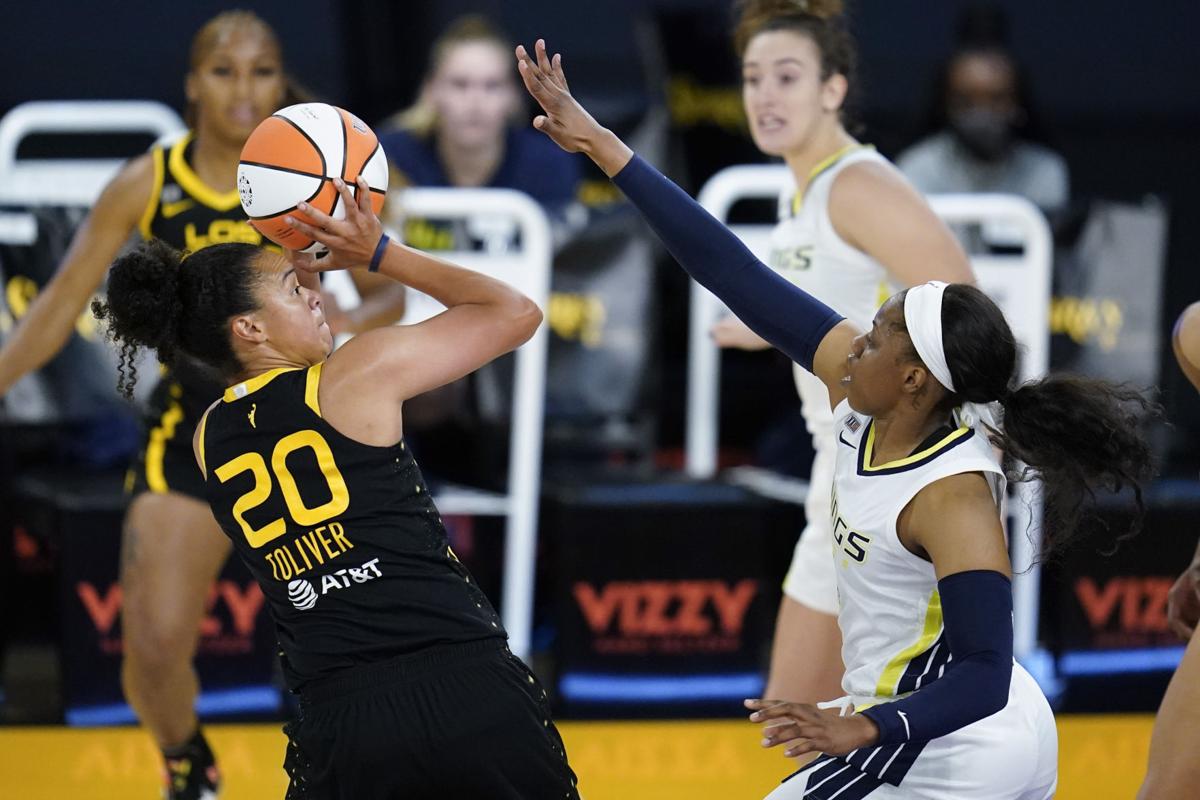 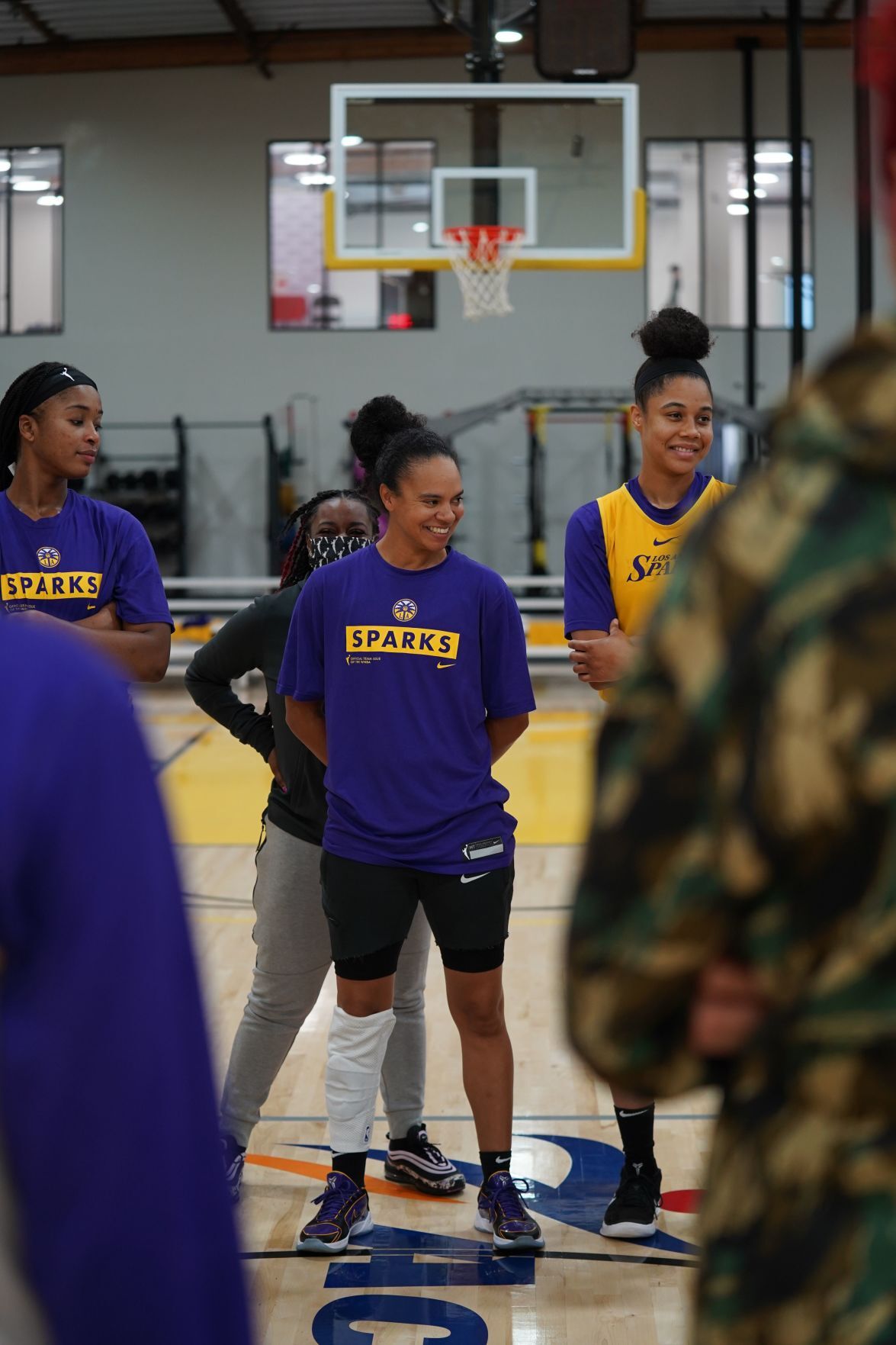 Harrisonburg grad Kristi Toliver played with L.A. on Thursday night against her former team in Washington. 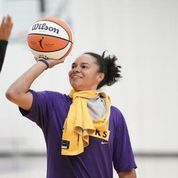 Harrisonburg native Kristi Toliver played in college at Maryland and began her pro career in 2009. She was the third overall pick of the WNBA draft that year.

Harrisonburg grad Kristi Toliver played with L.A. on Thursday night against her former team in Washington.

Harrisonburg native Kristi Toliver played in college at Maryland and began her pro career in 2009. She was the third overall pick of the WNBA draft that year.

WASHINGTON — Harrisonburg native Kristi Toliver, with her teammates hoisting up shots here in warmups minutes before tipoff, had more important matters to address Thursday night before her 393rd WNBA game.

Wearing the black and gold jersey of the visiting Los Angeles Sparks, the former Blue Streaks’ star and veteran pro stretched her right leg across the scorer’s table at the Entertainment and Sports Arena in southeast Washington.

“I’m me — I’m a 34-year-old veteran,” the 5-foot-7 Toliver told reporters earlier Thursday. And that means there are times she needs to take care of her body before a game instead of firing up a bunch of practice shots.

A pro since 2009, the former University of Maryland guard returned to the region with the Sparks on Thursday night. She helped the Terps win the NCAA title as a freshman in 2006.

“It is great to be back. I love this area,” she told the Daily News-Record in a Zoom interview before the game. “Family and friends are here. It has been good to re-connect with all of them.”

Toliver, the former Harrisonburg High star and 2005 graduate, is in her first season with the Sparks even though she signed with Los Angeles prior to the 2020 season after helping Washington win the WNBA title in 2019.

She took off the 2020 season due to the pandemic and risk of injury, but voiced her support of several causes on social media last year. The WNBA has made a concentrated effort of late to support racial justice.

“Last year not playing, and just watching all of the things that were happening ... as a viewer watching the games I was extremely proud of the message that was being sent,” she told the News-Record. “The women in this league have always been leaders for the right things. I’m just extremely proud to be a part of that.”

Toliver doesn’t say a lot with her posts on social media — but they are usually timely. She expressed her dismay when protesters stormed the U.S. Capitol on Jan. 6.

“Kristi has always been interested in politics and life in general. She’s a thoughtful person, can hold a conversation on all sorts of topics. When she was playing here, she was the first person I ever saw wear an Obama shirt,” her college coach, Brenda Frese, wrote to the News-Record on Friday night. “And that was before he became President. I think her mom [Peggy] had seen him speak somewhere. I think I remember her being into Gandhi at some point as a college student.”

On the court, the Sparks are 4-4 after they lost 89-71 in Washington on Thursday to the Mystics as Toliver started, played 24 minutes and had just three points.

Toliver has started the first eight games this season for the Sparks and is averaging 24.9 minutes, 8.6 points and 2.6 assists per contest.

But it is more than numbers that makes her valuable.

Sparks’ forward Karlie Samuelson, who played in college at Stanford, was with Los Angeles in 2018 and then with Dallas in 2019.

“I was really excited to play with Kristi,” Samuelson told the News-Record this week. “She is a very smart player. It is very fun to watch her.”

Los Angeles post player Kristine Anigwe was traded to the Sparks last year. She grew up in the United Kingdom and played in college at California.

“Like a coach on the floor,” Anigwe said of Toliver, who was an assistant coach with Washington in the NBA in 2018-19. “I am going to continue to learn from her.”

Toliver, who turns 35 in January, gives the Sparks another veteran guard. She has averaged 12.3 points and 3.5 assists per game in regular-season play, and 15.4 points per contest in 46 playoff games in the WNBA. She has 796 career rebounds, 4260 points and 1225 assists.

“That is going to bode well as our strength,” Sparks general manager/coach Derek Fisher, a former NBA star with the Lakers, said of his guards.

She has played several years overseas, including stops in Israel, Hungary and several seasons in Russia. She last played in Russia in 2017-18.

The defense of the Sparks has been one of the best in the league of late, but gave up some easy shots here Thursday. “Our players deserve the credit for doing the work,” said Fisher, part of title teams with the Lakers during his NBA career from 1996 to 2014.

“We want to play fast — that is part of our identity,” Toliver said. “We have a lot of guards on the floor. That is an advantage to what we want to do. I’m a guard, so of course I love small ball. I think we are trending in the right direction.”

The team has some new players on temporary contracts.

“Overall, Fisher’s philosophy is freedom offensively,” Toliver said of the coach of the Sparks. “It has been good for us. We continue to get better with more familiarity with each other. When you can play free and there is opportunity for everyone, we will take advantage of it.”

A reporter asked Toliver what was different about her game since she played for Washington in 2019. She was the third overall pick of Chicago in 2009.

“What’s different? Not a whole lot,” she said, after a long pause. “I’m me — I’m a 34-year-old veteran. I am who I am. The only thing that is different is I have to be patient with myself. I have not played five on five basketball live in 18 months, 19 months. As far as getting that rustiness off at this level, and being able to do so some things I’m used to — trying to work through some kinks. Other than that, same old me.”

Now in California, she made a rare trip to the DMV with the Sparks — 15-7 last season with a game Saturday at Minnesota. Toliver thanked the Mystics on social media Friday after they gave her a video tribute during the game Thursday. Her father, George, played hoops at JMU and has been a referee in the NBA. Her sister, Carli, played at Division I Lehigh from 2001-05.

“The emotions will be there,” Toliver said before the game in Washington. “I am extremely happy here, I am extremely comfortable here.”

And that comfort level has expanded off the court as well after taking off last season to focus on her health and other issues.

“I’m not surprised to see her expressing her opinions. Basketball has taken her to a lot of different places around the world and I’m sure she’s some exploring while on that journey. Every place has unique issues; it’s all part of growth as a person and Kristi has certainly done that,” noted Frese, 51, the AP coach of the year this season.