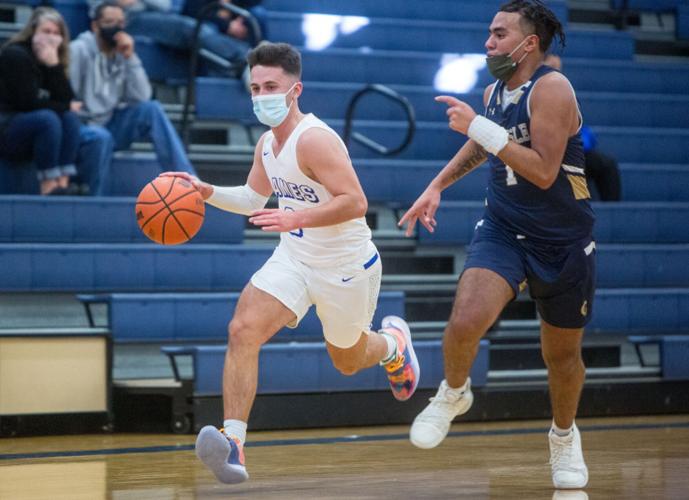 Eastern Mennonite's Adam Hatter moves up the court against Carlisle. 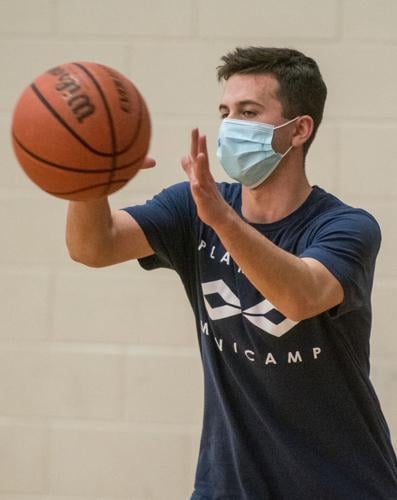 Adam Hatters tosses a pass during practice at Eastern Mennonite.

Eastern Mennonite's Adam Hatter moves up the court against Carlisle.

Adam Hatters tosses a pass during practice at Eastern Mennonite.

There’s something different about playing point guard for a team coached by Chad Seibert.

“A lot of people think that if you’re the point guard, you’re the guy that brings the ball up the court for your team,” the third-year Eastern Mennonite High School boys basketball coach said with a laugh. “For me, that is not a point guard. To be a good point guard, it’s much bigger than that. It’s kind of a lifestyle. It’s like being a quarterback in a way. You have to live it on and off the court, have to be a servant leader. You have to worry about other people first.”

With Seibert — a former Eastern Mennonite University assistant who also served as the head coach at Turner Ashby from 2013-2015 and as an assistant at Boulder High School in Boulder, Colorado before coming to EMHS — entering his third year leading the way for the Flames, there’s only one player on the roster who has been by his side throughout: Adam Hatter.

“I’m not saying he’s the best point guard in the state, but what I am saying is that I haven’t seen one yet that I would trade him for,” Seibert said. “For me, that’s a big, big compliment to say that. It’s a huge compliment to him.”

Hatter, a 5-foot-9 junior, has been part of the EMHS boys basketball program since his eighth-grade season when he and his brother, Zach, transferred to the school from the Waynesboro school district. They first played under longtime former coach — and athletic director — Dave Bechler, who retired in 2019 to pursue other opportunities. Hatter's younger brother, Drew, is now a freshman at the school.

Prior to the 2018-19 season, however, Seibert was named the new boys' basketball coach for the Flames as Bechler aimed to focus on duties as the school’s AD. Quickly, the veteran basketball mind recognized Adam’s talent.

While at Boulder as an assistant, Seibert coached Riley Grabau, who was named the 2010-2011 Colorado 5A Player of the Year after leading the Panthers to a 25-3 record and a state title. Grabau went on to play four years at Wyoming.

While coaching Turner Ashby, Seibert once again coached a special talent in James Sullivan, who transferred to Spotswood for his senior season and is now in his senior year playing at Division II Millersville University in Pennsylvania.

Then, in Seibert’s first year at EMHS during the 2018-19 season, it was Zach Hatter that stepped up big under the head coach as he was named the Virginia Independent Conference Player of the Year after a breakout senior campaign.

“I’d put Adam right in that same category with those guys,” Seibert said. “I know what a great point guard looks like. One of the reasons I wouldn’t trade him for anybody I’ve seen is so much of it comes down to the fit. He’s a really good fit for us. He’s been the engine in the race car. … He does all the little things to make sure everyone else is taken care of before he worries about himself. That’s the kind of leadership that you want and that’s what helps you win.”

Adam Hatter’s role as a leader has never been more evident than right now as the Flames look to replace the loss of two crucial seniors from a year ago in Aviwe Mahlong and Chance Church. But the truth is, according to Seibert, that the soft-spoken point guard wasn’t always able to control his emotion in an effective way and it impacted his play.

“There’s never been anyone that was more of a freshman than Adam when he was a freshman,” Seibert said. “He can tell you that he would get his own film session at times. It was all about Adam and me catching him pouting or slipping with his body language and reacting to a mistake. He’s really had to grow into that and learn from that.”

Those long talks with Seibert and film sessions with the Eastern Mennonite coaching staff paid off, Hatter said.

After Zach, who will begin his collegiate career at nearby Bridgewater College this season, graduated in 2019 and Mahlong and Church departed a year ago, the pressure was immediately put on Hatter to step up in a big way.

“I’ve been trying to be more vocal this year,” Adam Hatter said. “Of course, I have [EMHS senior forward] Nick [Jones] with me this year and I think we’re doing a good job together so far. We can definitely be vocal even more, though.”

The truth is, while Hatter wants to be more vocal now as a fourth-year varsity player for the Flames, he doesn’t have to do as much as other players because his game — and more importantly, his experience — speaks for itself in a sense.

“It’s really helpful because he’s been there a few years and every year, his role has gotten bigger and bigger,” said Eastern Mennonite guard and Hatter’s backcourt mate Trey Gillenwater. “If it’s a close game or a big-time situation, he doesn’t get phased or anything. He just plays his game. It’s really nice to have someone else that is calm out there.”

“It definitely makes the game come easier because I’ve been here before,” Hatter said of his experience. “If something is going wrong or whatever, I know it’s not the end of the world because I’ve been through it and I know we’ll be OK.”

While Hatter’s level-headed approach to the game may have taken some time to develop, his willingness to sacrifice his own individual gain for the overall team is a trait that his teammates and coaches say he’s always possessed.

“Adam is one of the most selfless individuals I know,” said Mahlong, who is now playing at Millersville with Sullivan. “Adam constantly puts the team before himself and is a great leader. When I had bad games, Adam always reassured me that it’s OK and that it happens to the best of us. He made sure I was in good spirits and always checks up on me.”

During his senior season at EMHS, Zach Hatter averaged a team-best 18.1 points per game and was known as one of the city/county’s best overall players with his prolific ability to create a shot from almost anywhere on the court.

“He’s more of a true point guard,” Zach said of Adam. “I would run the offense a lot of times, but I’d be the guy that we tried to get shots or I’d look to score first. He looks to get people involved more than I did. He’s more of a traditional point guard leader where he’ll move it around and shoot it if he needs to. He’s a lot better at getting everyone involved.”

For the Flames, it isn’t always statistically that Adam Hatter has made his biggest impact over the years since the complex EMHS offense requires the point guard to get the ball out quickly on offense and to step up big on defense.

“He sacrifices a lot of his own game to help other people get their shots and their opportunities first, but so much of what he does doesn’t fill up the stat line,” Seibert said. “He gets the basketball out of his hands early, which is big for us. We want the basketball passing halfcourt in the air at least 30 times a game. He has to be really unselfish in getting the ball out of his hands early. A lot of times that doesn’t lead to anything that’ll show up in the boxscore.”

The responsibility Hatter wears on the defensive end has resulted in bit of scrappiness from the 5-foot-9 guard.

“You can’t play and be as effective as he is with his size without having a huge chip on your shoulder,” Seibert said. “He has that fire and the guys know it, but you might not see it in his demeanor because he’s trying to be the coach on the floor and my eyes out there. ... As soon as you take a guy like him out, it’s a 12-0 run for the other team and everything falls apart because of all the little glue things Adam does. I coach my point guards really, really hard. I give those guys the keys to the program. With that comes an enormous amount of responsibility. It’s not an easy thing.”

Hatter’s strengths are his willingness to sacrifice on one end of the court while stepping up at times on the other.

“He’s a true point guard,” Gillenwater said. “He makes everyone else better and he’s really good at getting his teammates involved. Then, at the same time, he can also go and score and stuff, too. Even though he’s kind of undersized, he is not afraid at all of guarding someone who is bigger than him. That’s what makes him different.”

For his career, Hatter is averaging 6.3 points, 2.9 assists and 2.6 rebounds per game, along with a steal per contest.

He is being heavily recruited by several Division III programs, per Seibert, and still has another year left.

“I love seeing my teammates score and get buckets,” Hatter said. “If I can help them and set them up a little more, it definitely feels good for me. Obviously, a win is more important than anything for me. That’s the main thing I want.”

When playing under Seibert, the responsibility of being the point guard is one that can sometimes be overbearing.

Luckily for the Flames, Adam Hatter has been able to handle everything that he’s had thrown at him thus far.

“He makes the play that leads to the play so much for us,” Seibert said. “It’s invaluable. I can assure you of that. There’s great players and there are people who make other people great. I think a component of being a great player is that you have to make people around you better. He is the multiplier that really makes everyone else three or four times better than they’d be without him.”