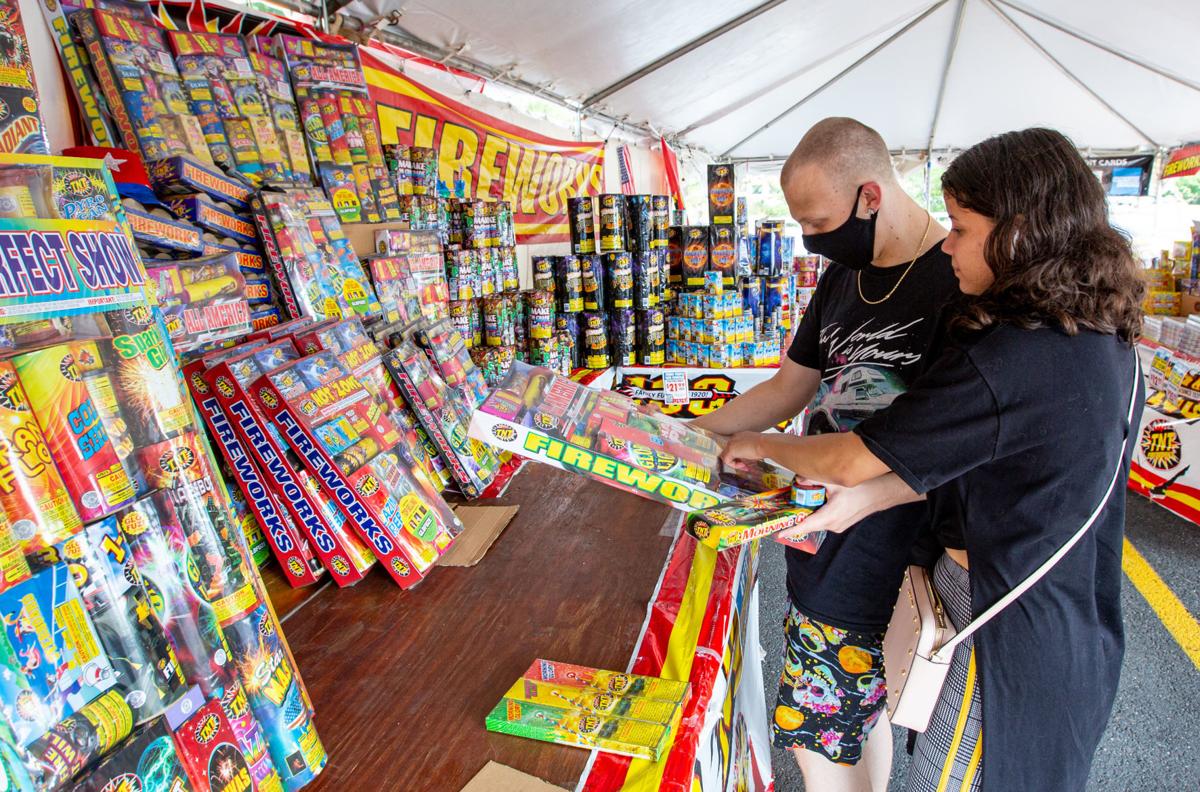 Reiss Wimer and Jeira Acevedo, of Harrisonburg, shop through fireworks at the TNT Fireworks stand in the parking lot of Walmart on Va. 42 on Wednesday. The stand’s owner, Sean Campbell, said sales have been stronger than in recent years. 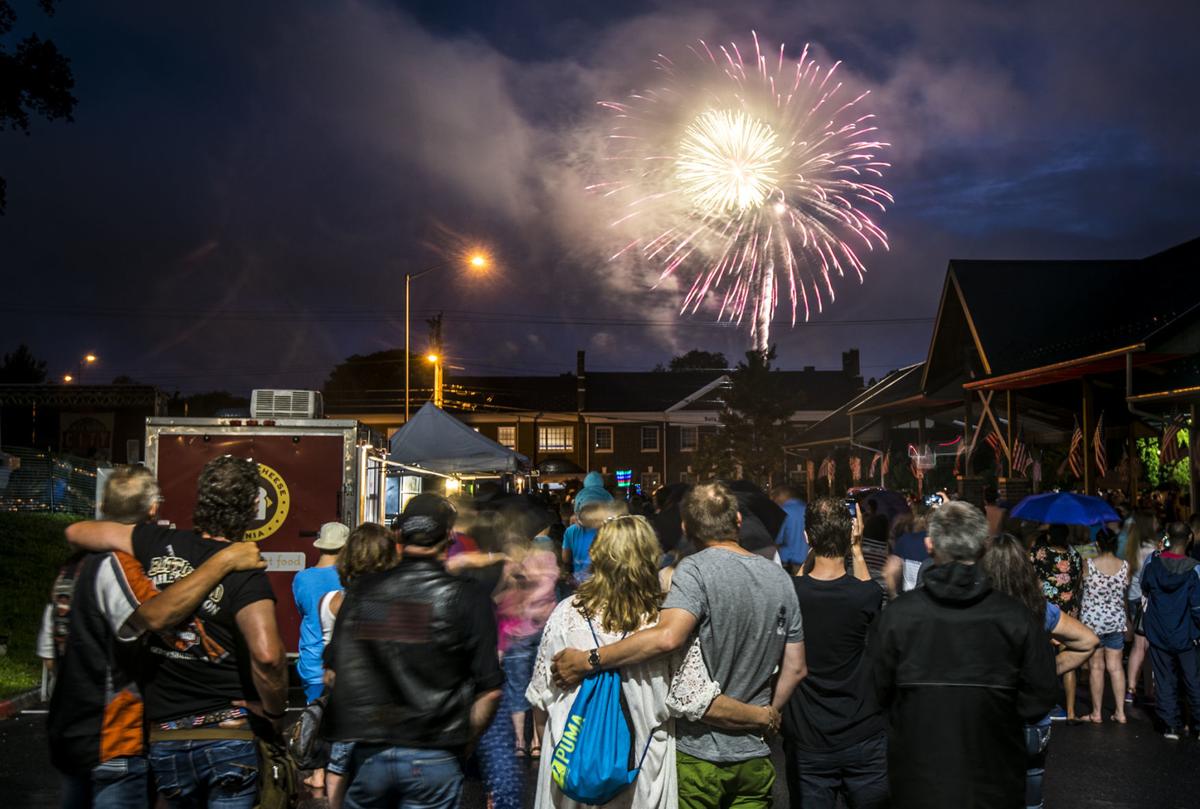 Festivalgoers to the Valley Fourth celebration watch as fireworks are shot from Westover Park on the Fourth of July in 2018. This year’s show has been delayed indefinitely due to COVID-19. 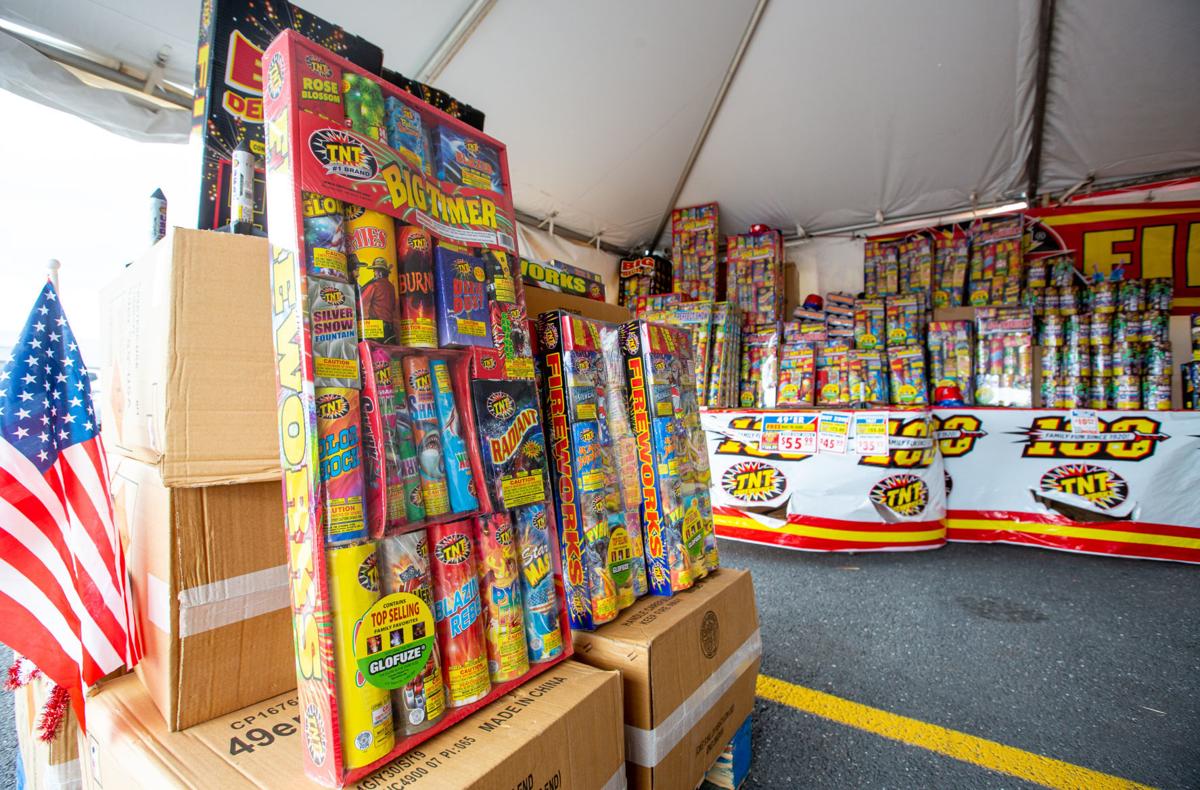 Fireworks sit for sale under the TNT Fireworks tent in the parking lot of the Walmart on John Wayland Highway Wednesday.

Reiss Wimer and Jeira Acevedo, of Harrisonburg, shop through fireworks at the TNT Fireworks stand in the parking lot of Walmart on Va. 42 on Wednesday. The stand’s owner, Sean Campbell, said sales have been stronger than in recent years.

Festivalgoers to the Valley Fourth celebration watch as fireworks are shot from Westover Park on the Fourth of July in 2018. This year’s show has been delayed indefinitely due to COVID-19.

Fireworks sit for sale under the TNT Fireworks tent in the parking lot of the Walmart on John Wayland Highway Wednesday.

At its May 26 meeting, Harrisonburg City Council voted to delay the usual July 4 fireworks display it puts on in partnership with Harrisonburg Downtown Renaissance due to the COVID-19 pandemic.

But local residents apparently won’t go without a show. Area fireworks salesman of three years Sean Campbell said sales have been stronger than in recent years.

“I thought it was going to be different due to the circumstances [with COVID-19] but that has not proved to be the case,” he said. “We are selling out very quickly.”

Campbell said the most popular products are the largest “fountain” type fireworks and smaller fireworks that parents can give to children, such as sparklers.

He said some people ask him for Roman candles, bottle rockets and mortar fireworks, which are illegal in Virginia. However, Campbell said, Virginia residents will often travel to bordering states to obtain such fireworks for the holiday.

Just down the road from the fireworks tent Campbell was manning outside Walmart on Va. 42 on Wednesday lies the city of Harrisonburg, where all fireworks are illegal.

Mike Armstrong, Harrisonburg Fire Department deputy fire marshal, said the city sees a large uptick in burns in area emergency rooms and urgent care centers from the week before July 4 to the week after.

“Ultimately, you’re dealing with an explosive, and you need to be very careful with that,” Armstrong said.

He said even sparklers can be a risk, since they burn between 1,500 and 2,500 degrees Fahrenheit, and even after going out the metal is still 1,000 degrees until it cools.

“We’re giving that to a toddler to carry around in the front yard [and] the potential for them being severely injured is pretty high,” Armstrong said.

In addition, the fact that fireworks present a fire hazard makes them even more dangerous in areas with density, such as the city, according to Armstrong.

He said the fire department is not anticipating an increase to the typical amount of fireworks set off illegally.

“Unfortunately, we occasionally see some very serious injuries due to improper use of these things,” he said.

At the May 26 meeting, council member George Hirschmann floated the idea of moving the fireworks display to Labor Day, which at the meeting received quips of support from fellow city leaders Mayor Deanna Reed and council member Chris Jones.

In a Wednesday interview, Hirschmann said he and the other council members have not discussed the fireworks display since that meeting, and he would bring it up at the council’s next meeting on July 14.

Erin Smith, the director of special projects for the Harrisonburg Downtown Renaissance, said staff is trying to find a date this year where large gatherings can be held so people can watch the fireworks while still avoiding the possibility of a large COVID-19 outbreak.

“We want to have fireworks and to be able to celebrate as a community, especially when times are so difficult right now, but we’re always prioritizing public safety,” she said.

On Wednesday, the city of Harrisonburg did not record a positive COVID-19 test for the first time since March, according to Michael Parks, the director of communications for the city.

“We definitely do not want to do anything that would be moving us in the wrong direction,” Parks said in reference to a large gathering, such as for a fireworks display.

Two dozen city residents have died of COVID-19, and there are a probable 937 cases in the Friendly City, though the true number is likely higher due to testing issues, according to data from the Virginia Department of Health and the Virginia Public Access Project.

Parks said that when people gather to celebrate July 4, they should still wear masks, wash their hands frequently and observe social distancing to help reduce the spread of COVID-19.

“It is possible to celebrate Independence Day this weekend while being mindful of following those important steps,” he said.

I had no idea that sparklers were verboten to the individual in Harrisonburg. It is remarkable how far we have devolved from a free people to a people masquerading as a free people.