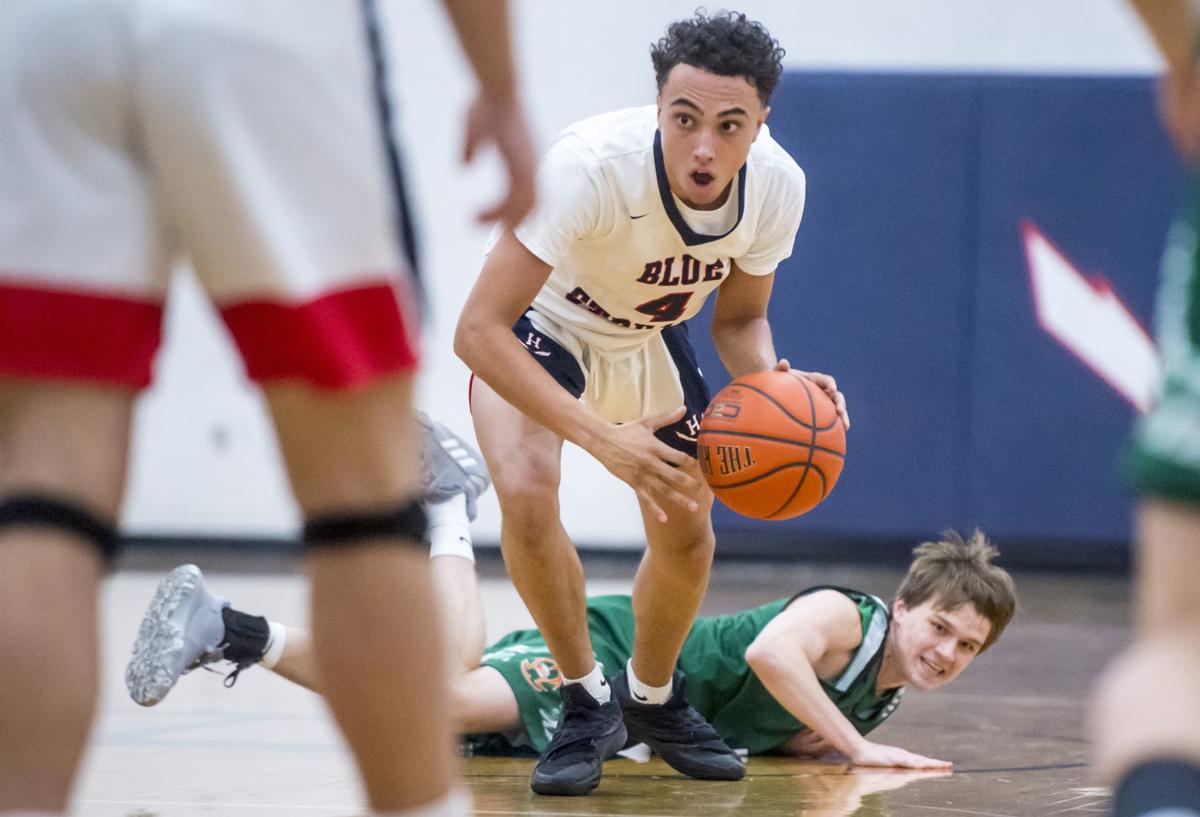 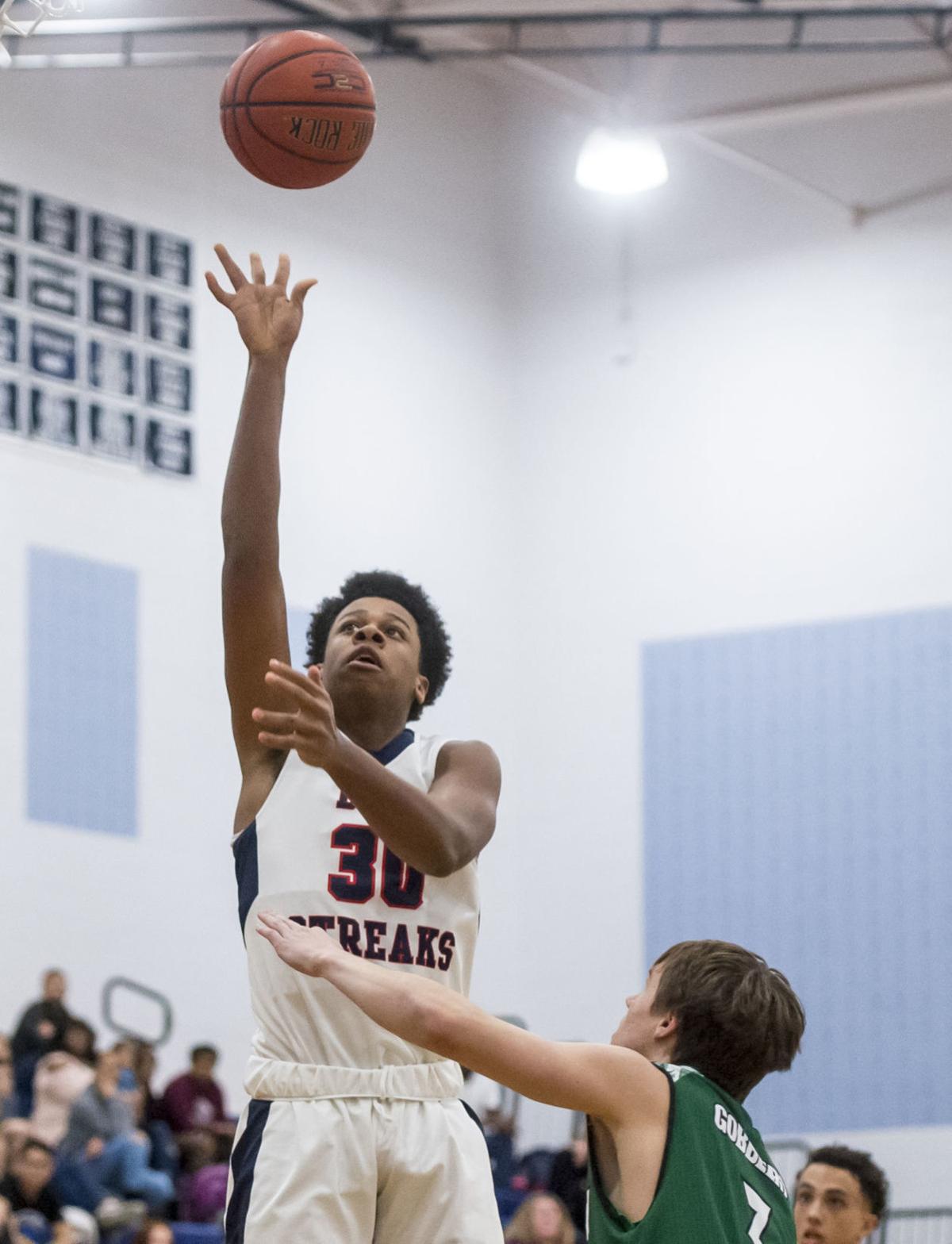 Harrisonburg’s Jazen Walker goes up for a shot over Broadway’s Jaxon Jameson. 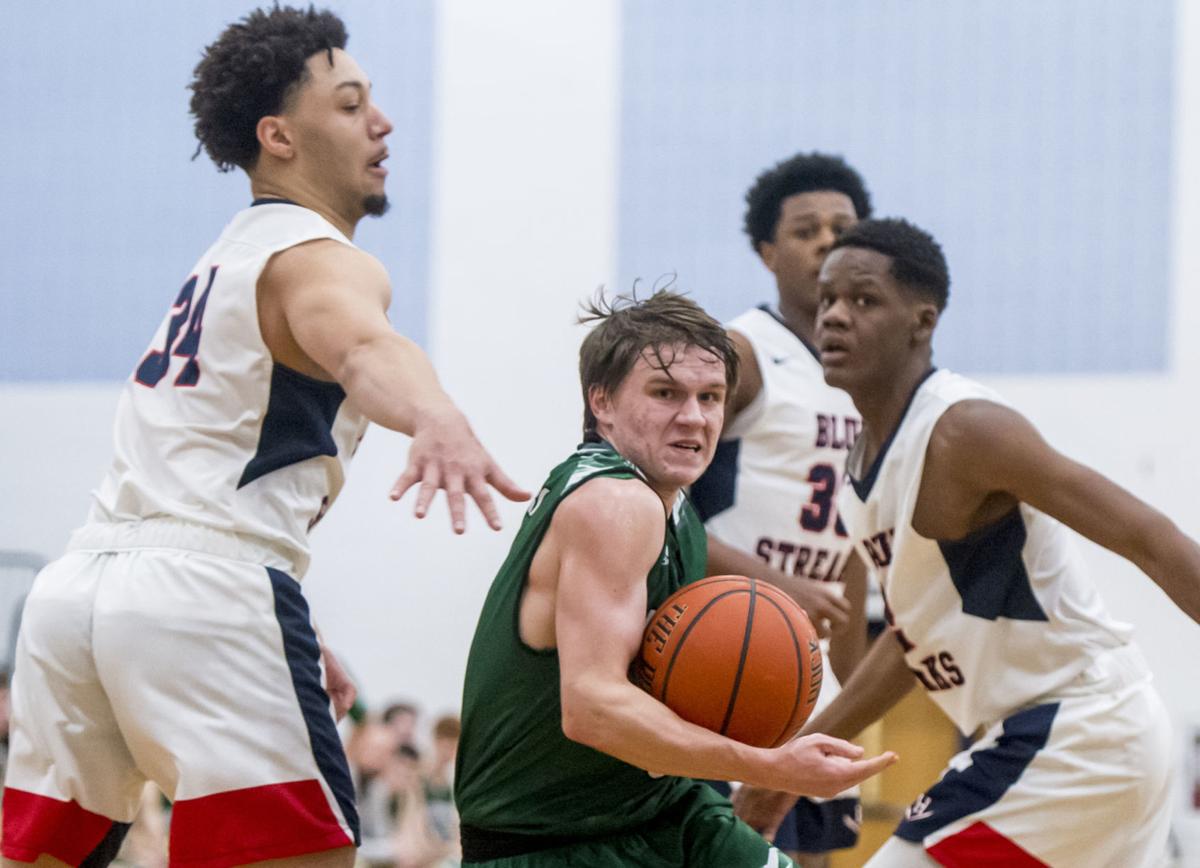 Broadway’s Jaxon Jameson threads between Harrisonburg’s D’Shawn Fields, left, and Michael Kuangu on his way to the basket.

Harrisonburg’s Jazen Walker goes up for a shot over Broadway’s Jaxon Jameson.

Broadway’s Jaxon Jameson threads between Harrisonburg’s D’Shawn Fields, left, and Michael Kuangu on his way to the basket.

The serious demeanor of D’Shawn Fields never changed in the second half.

“You have to act like you’ve been there,” the Harrisonburg forward said. “We have the experience. We know what we need to do. You just try to perform as best as you can.”

The Blue Streaks held off Broadway’s second-half rally and made just enough plays late to pick up a big 54-45 win in Valley District boys basketball action at HHS on Tuesday.

After dropping five of its first seven to open the season, including several excruciatingly close losses, Harrisonburg has now won three straight and is perfect in district play.

“Our guys found a way to win,” Blue Streaks coach Don Burgess said. “I think a lot of our earlier non-district contests helped us out. We know the Valley District is going to be very tough. The quality of teams is high. Our games earlier on prepared us for that.”

Despite never trailing Tuesday, the game was never completely put away by HHS.

The Blue Streaks used a 16-3 run that stretched across the first and second quarters to go into half up 12, but the Gobblers were able to cut the lead to four multiple times.

“Broadway is a tough team,” said Burgess, whose team is now 2-0 in league play. “Coach Walton does a great job with those guys. We know it’s always going to be a gritt game. He has some quality players. They can shoot the 3, put the ball on the deck.”

The closest Broadway got in the fourth was 41-38 on a bucket from Gage Williford.

But Fields responded with a traditional three-point play to push the advantage back to six and Harrisonburg made enough plays down the stretch to hold on for the big win.

“I never felt like we got in a rhythm,” Gobblers coach Dwight Walton said. “We struggled communicating guards and posts together. I never felt like we ever worked well. It’s one of those things that when we get sluggish starts, it carries over to our defense. I just don’t feel like we had the bounce and the step to defend against really good athletes.”

Broadway had to play without senior forward Ben Alderfer on Tuesday after the 6-foot-3 post player took an elbow to the mouth in last week’s game against Waynesboro.

That forced Walton to go deeper into his bench and put players in unfamiliar roles.

“Those are times that always concern you,” Walton said about missing Alderfer, who is an elite rebounder. “You never know how kids are going to respond or step in. Guys came in and tried to do things. I thought they did a good job, but Harrisonburg is very athletic and they’re hard to keep off the glass. That was a concern from the start.”

For the Streaks, it was another impressive defensive effort in Valley District play.

“A lot of guys on the roster this year are in new roles,” Burgess said. “We have a lot of guys here and they felt like they needed to focus on their offense. They saw that put us at 2-5 and we were losing. Our coaching staff preached it to the guys and it’s good to see them buy in. The defense is getting better. We still have a ways to go, though.”

“Our confidence just builds every day, every practice,” Fields said. “It boosts our self esteem and stuff. It just gives us confidence that we can keep doing this in big games.”

For the Gobblers (10-4, 1-1 Valley), Caleb Williams had 12 points while Williford finished with 11 and Jaxson Jameson and Wes Delawder chipped in with nine apiece.

Harrisonburg will now turn its attention toward a district showdown on Friday with seven-time district champion Spotswood. That game is at 7 p.m. back at HHS.

Much like Tuesday, however, the Blue Streaks said they’ll lean on their experience.

“Those close games help us be able to close games like this out,” Tacy said. “We had to grind it out until the end. Those early games helped us because we learned from what we did. We’re rivals with these teams. It’s going to be a good week.”