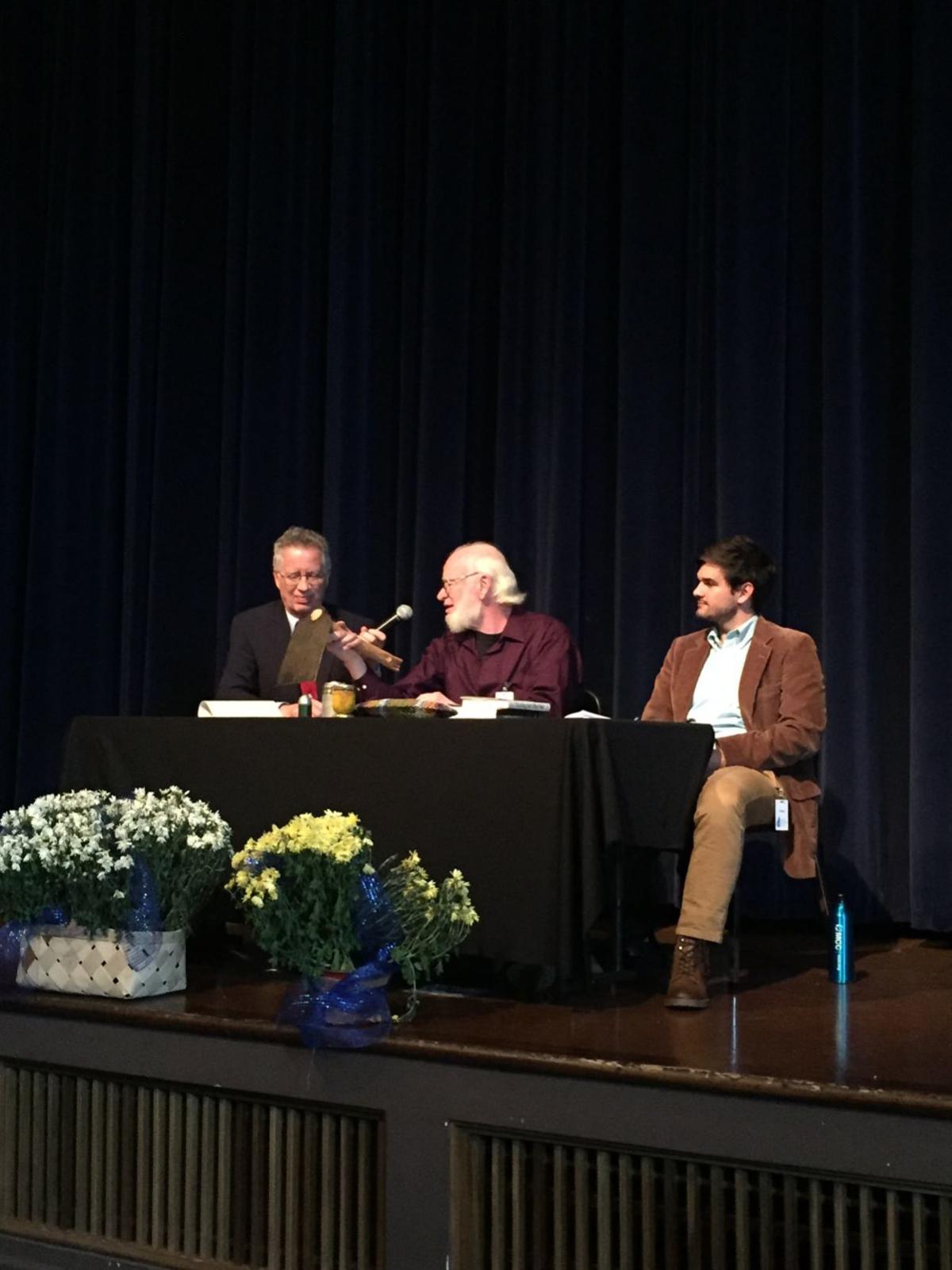 Earl Martin, center, shows how farmers working in fields in Vietnam can hit ammunition that failed to explode on impact leftover from war. 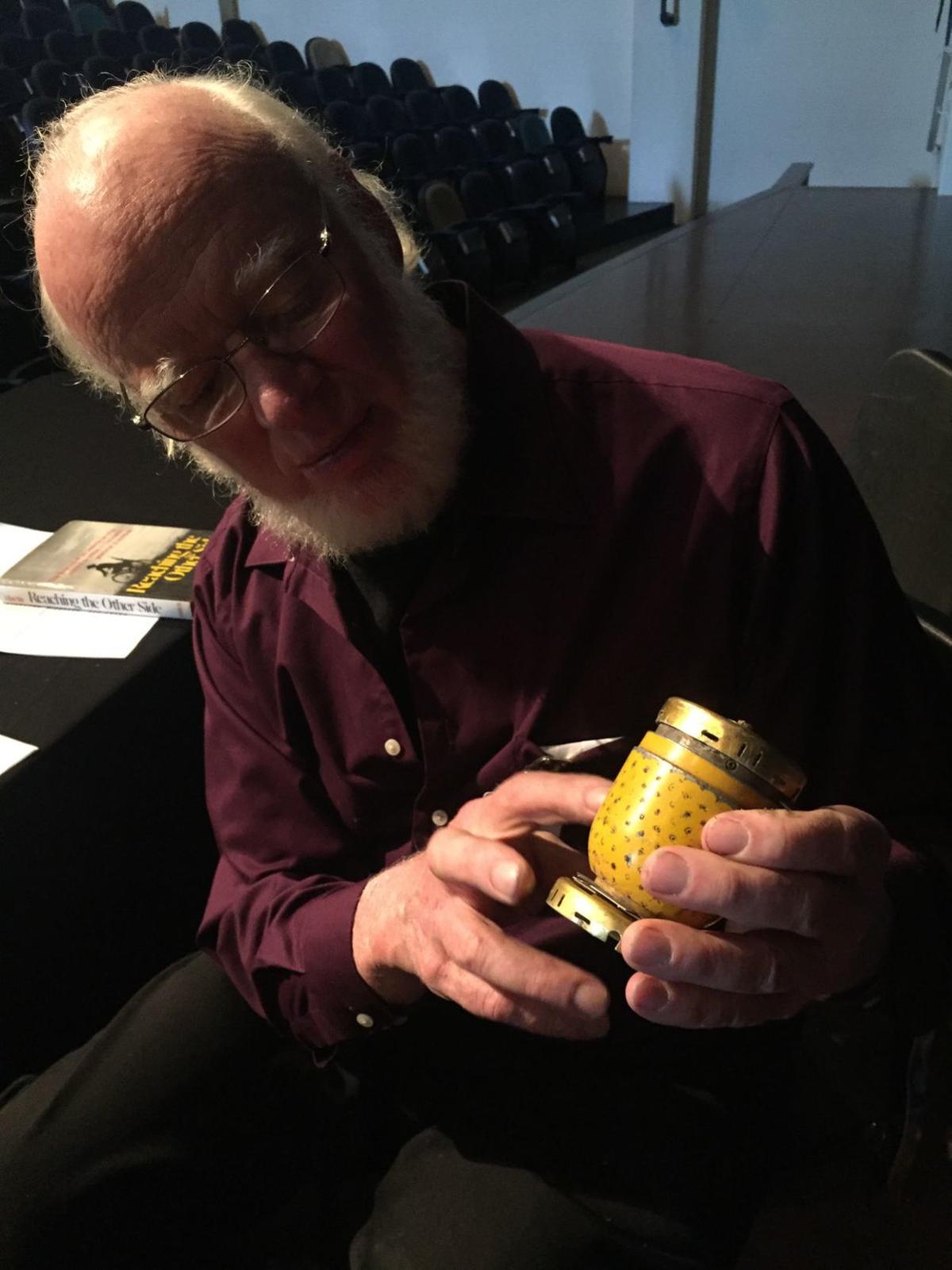 Earl Martin brought with him two airdrop cluster bomb units and a M-79 grenade. Martin worked to clear fields in Vietnam of unexploded ordnances because, he said, no one else was doing that work in the 1970s. 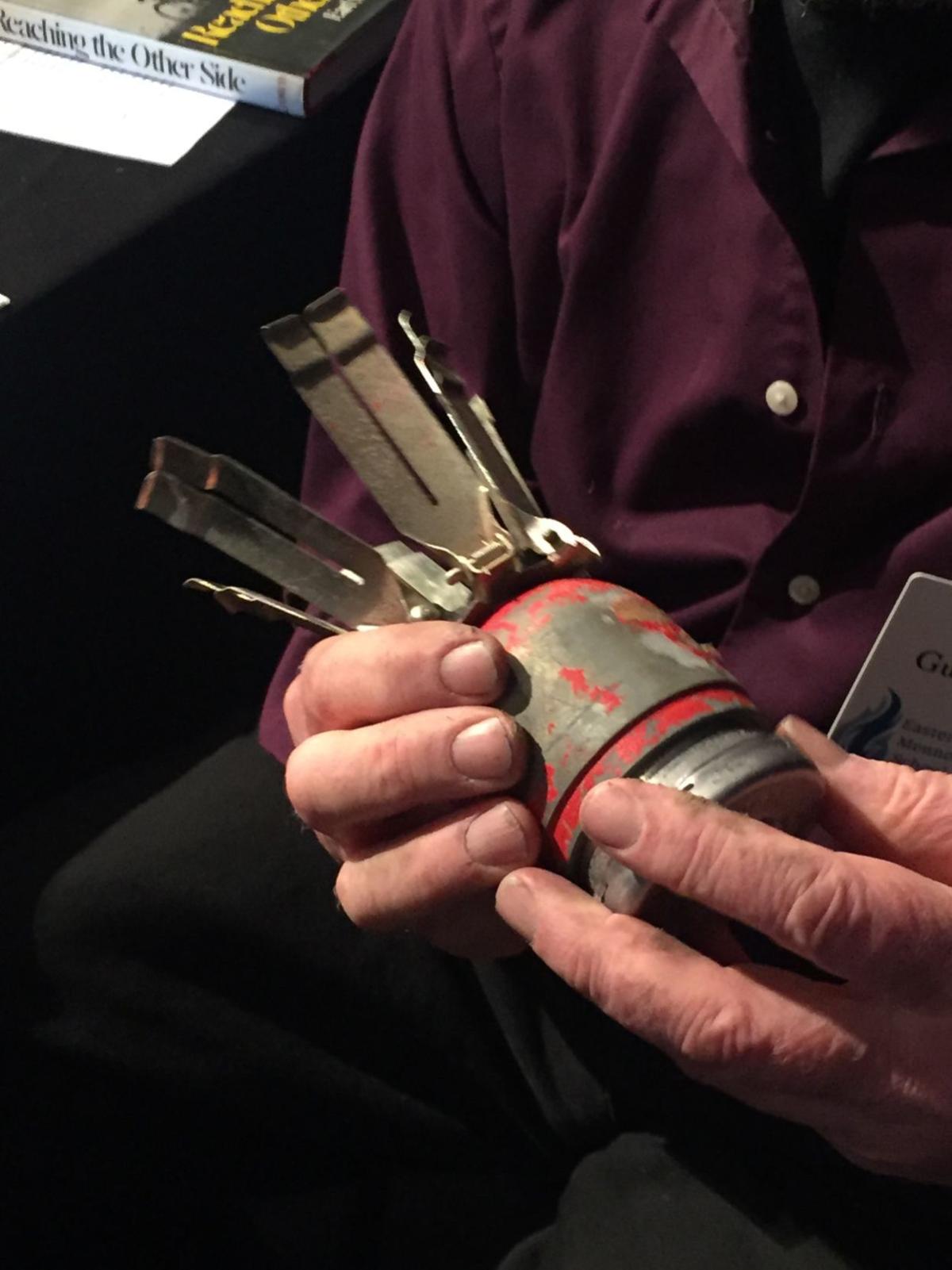 Earl Martin described the structure of a cluster bomb as similar to a Lima bean.

Earl Martin, center, shows how farmers working in fields in Vietnam can hit ammunition that failed to explode on impact leftover from war.

Earl Martin brought with him two airdrop cluster bomb units and a M-79 grenade. Martin worked to clear fields in Vietnam of unexploded ordnances because, he said, no one else was doing that work in the 1970s.

Earl Martin described the structure of a cluster bomb as similar to a Lima bean.

War is not something easy to forget, but the individual lives and stories that survive conflict do not always make it into the history books.

Eastern Mennonite School hosted the 19th annual Kennel Charles Lecture Series on Monday with speakers Earl Martin and Caleb Schrock-Hurst, two Mennonites who served abroad with the Mennonite Central Committee in Vietnam. Martin offered a historical perspective from the Vietnam War alongside Schrock-Hurst, MCC Vietnam’s 65th anniversary project facilitator, who spent the past year in the country’s capital as an English copy editor for stories of Vietnamese people.

Martin began the afternoon reading an excerpt from the journal he kept while living in the southern province of Quang Ngai during the war. The entries detailed the casualties and struggle for survival of rural families as well as the hopelessness of the displaced, scraping by in urban areas.

“Why don’t they take us back to the hills where we can hunt and farm and drink from the mountain streams and live in our own houses?” Martin recorded a Hre tribal woman in a refugee camp begging on the streets in 1967. “We are thrown here and left to die. And when we die, there is no one to provide funeral clothes or coffins for burial and we are buried like dogs.”

Martin quit school to travel with MCC for a three-year trip from 1966-69 to provide relief and materials for displaced people and returned from 1973-75 to work on ridding the fields of unexploded weapons, such as artillery shells, mines of Viet Cong and airdropped ammunition.

Another story Martin shared was of the Duong family, farmers in Vietnam who lost family during the war. Martin said the mother and son, Chi Ba and Bay, survived by hiding in fox hole bunkers. Anh, the father, was spotted by troops while racing across the field to save his buffalo from harm and was mistaken for Viet Cong. An aviation unit dropped a bomb on Anh, and he was torn apart by shrapnel.

Schrock-Hurst is an EMS alumnus who graduated from Eastern Mennonite University in 2018. He joined MCC’s post-graduate program, Service and Learning Together, and resided in Hanoi editing stories translated into English so Western cultures can understand the perspectives of those who saw the war unfold on their doorsteps.

One of the greatest tragedies after the war is how the number of deaths has been miscounted and incorrectly remembered, Schrock-Hurst said.

“The U.S. Vietnam War Memorial in D.C., one of the most striking places in the nation’s capital, is the 150-yards-long wall of names with U.S. soldiers who died. But if we were to include on that wall all the Southeast Asian people who died in this war, it would be 9 miles rather than only 150 yards,” Schrock-Hurst said.

Next week, Schrock-Hurst returns for another year in the city to gather a collection of oral history stories of MCC’s work in Vietnam over the last 65 years.

Elwood Yoder, history and Bible teacher at EMS, coordinates the lecture series and invited Schrock-Hurst to be a guest speaker. He said Schrock-Hurst provided a valuable perspective for attendance because the lessons Schrock-Hurst brought back from Vietnam are both everlasting and current.

“It was a history lesson but also a lesson about service and compassionate service of the world,” Yoder said.

Martin and Shrock-Hurst sat side by side on the auditorium stage reliving the past and recounting the present tales of suffering and strength they saw in Vietnam. At the end, a period of discussion opened up. One audience member asked Shrock-Hurst what MCC is doing to provide support for those still affected by Agent Orange, the chemical gas U.S. military used during warfare that is linked to a multitude of diseases and birth defects.

Schrock-Hurst said MCC provides financial support and occupational therapy for the third and fourth generations of war who still suffer from the effects of Agent Orange, but there’s little knowledge on how long the toxic effects will last.

“One of the tragedies around Agent Orange is that reliable science is a little bit hard to find, and really a good bit of that comes back to still American policy,” Schrock-Hurst said. “We don’t want to know the complete effects of Agent Orange because we don’t want to show or admit any culpability to it.”

Nearly 90 people sat in for the lecture. Attendance was mostly composed of EMS students, but various past MCC service members, including some who worked alongside Martin in Vietnam, also came to the event.