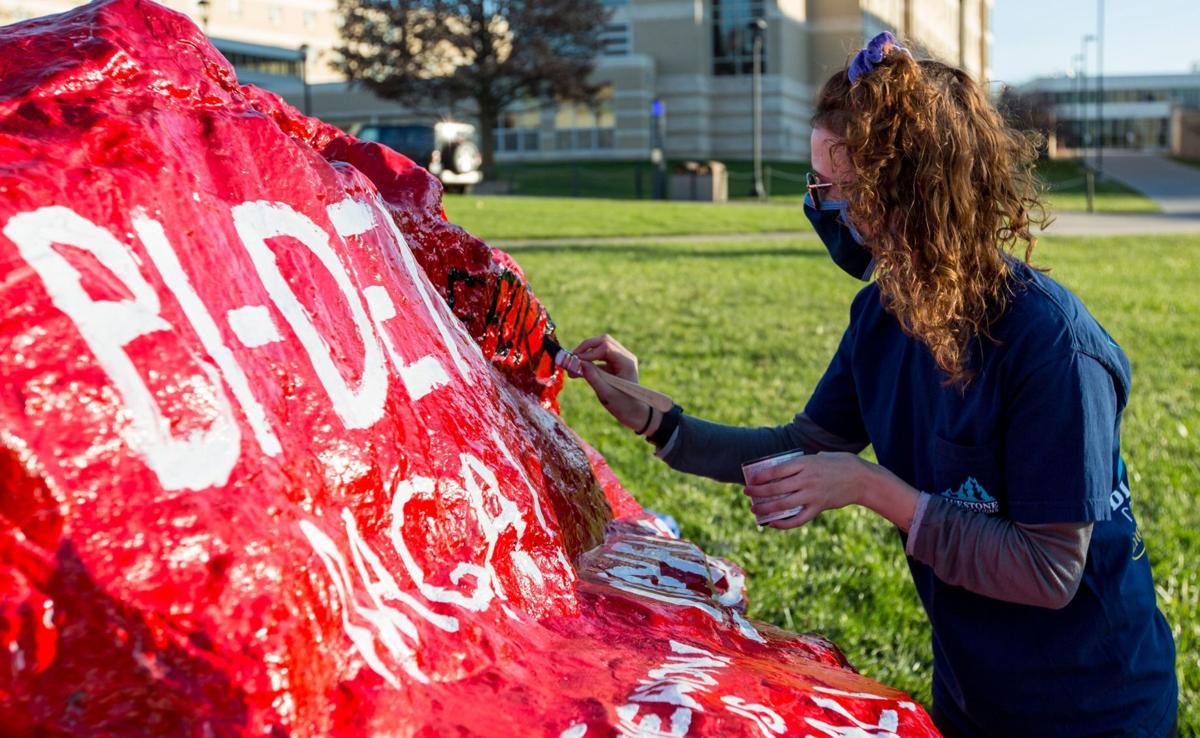 James Madison University senior Taylor DeRossett paints the Spirit Rock on East Campus with other members of Bluestone Communications, a student-run public relations firm at the university, on Thursday. 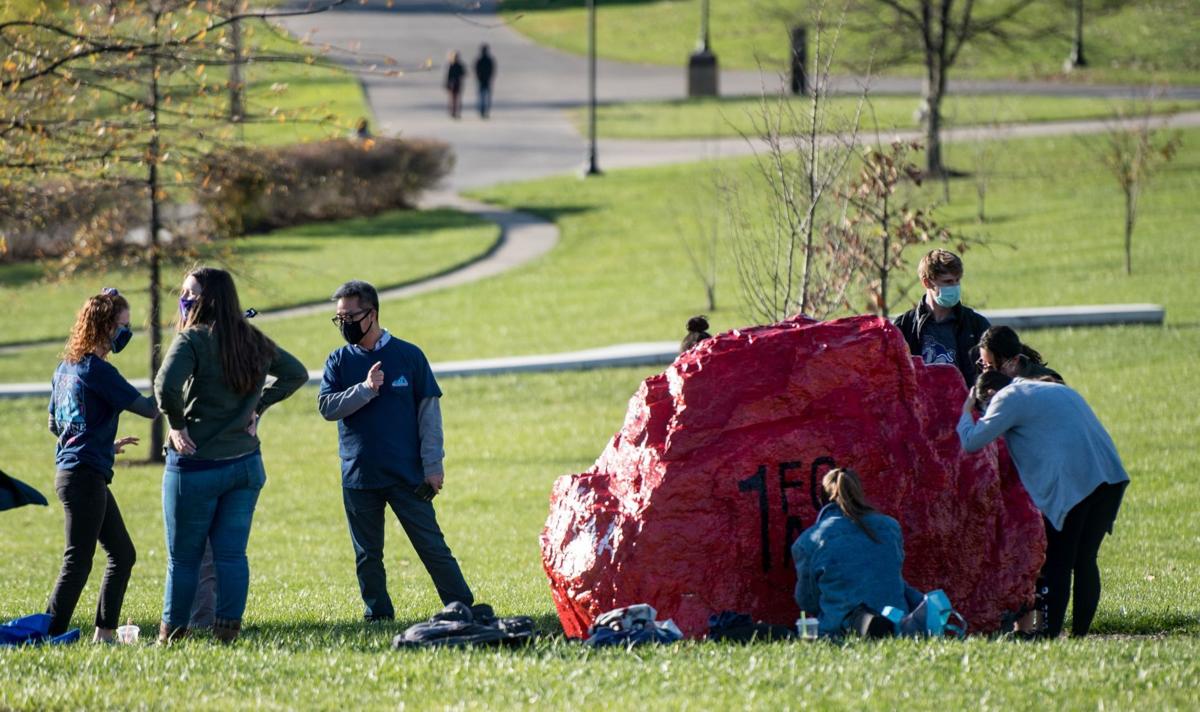 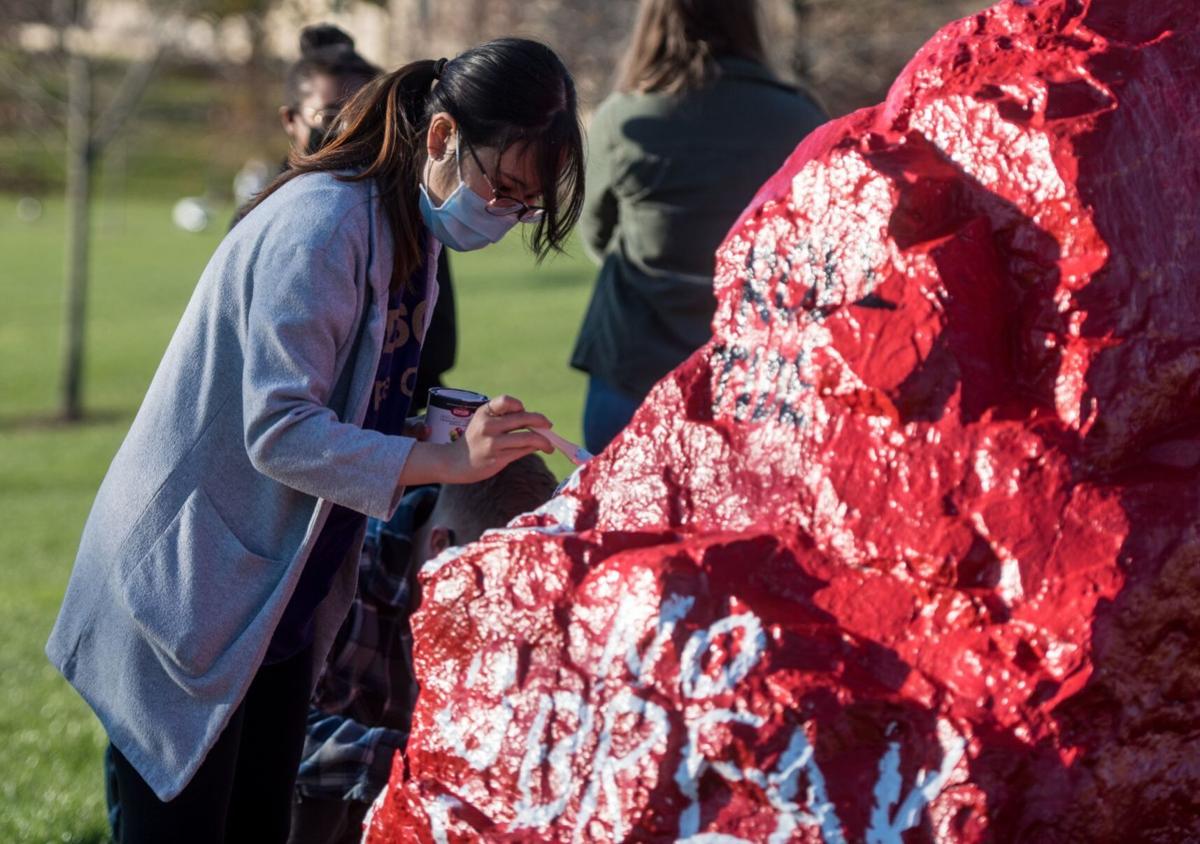 James Madison University senior Taylor DeRossett paints the Spirit Rock on East Campus with other members of Bluestone Communications, a student-run public relations firm at the university, on Thursday.

During the height of activism for Black Lives Matter over the summer, James Madison University’s Spirit Rock was defaced. Once a painted homage reading “Black Lives Matter,” the word “Black” was torn from the structure, limp shreds of paint scattered across the grass.

For months, the rock was a symbol of mourning on the hill, painted completely black to cover the traces of vandalism. On Thursday, students from the university’s student public relations firm, Bluestone Communications, and its 1 for All team gathered at the rock to right the wrong and bring a new face to the rock.

“Bi-Den,” “MAGA,” and “chill with the attendance policies” are among the prominent topics of conversation boldly legible against the now vibrantly red rock in the center of East Campus behind the Festival Conference and Student Center. It stands as a tribute to free speech, including featuring competing ideas.

1 for All is a national nonpartisan group created by Middle Tennessee State University’s Free Speech Center to celebrate and raise awareness of the five freedoms protected by the First Amendment. The nonprofit is a returning client for Bluestone students, but it gave the PR students free rein for how they spread its message and brand.

Bluestone’s faculty administrator, Isaac Woo, said the students organized a focus group study concentrating on student familiarity and comfort with their First Amendment rights, and the results were shocking.

“We found students were afraid to express their ideas in their social circles, so we wanted to create a space where they could express themselves freely,” Woo said of the events leading up to partnering with JMU’s Institute of Constructive Advocacy and Dialogue to promote Chalk It Up.

On Nov. 11, JMU’s 1 For All team planned an event called Chalk It Up, where students were invited to decorate the sidewalk around Warner Commons with colorful, albeit controversial statements, as an expression of free speech.

Over 100 students gathered for the event and covered the ground with opinions, thoughts and comments — both directed at the university and in general.

Senior Will Byrnes came out to Chalk It Up and the rock painting to share his thoughts with peers. Last week, the idea that called out to him was his stance on graduation looming in the near future.

While Byrnes said he’s always felt comfortable expressing his ideas on campus, he admired the idea of encouraging students to openly, unapologetically share their thoughts.

“The MAGA is kind of surprising, but I think that’s the whole point of this event,” Byrnes said. “I like what they’re doing.”

Senior Taylor DeRossett, account executive for Bluestone’s 1 For All team, was among the crowd at Thursday’s rock painting and said there was an abundance of statements to share from Nov. 11’s event, but the team picked conflicting ideas so they could all find harmony and share space on the rock.

“The rock is a symbol of free speech on campus,” DeRossett said.

When conducting the survey with the focus group, DeRossett said the team reached out to several clubs, organizations and classes for a broad consensus representative of the university’s population. She said comfort to express oneself among friends and strangers is always important, but the pandemic and recent presidential election puts more at risk for people with unpopular opinions.

“In COVID, speaking your opinion to your friend group could get you excommunicated,” she said.

To honor the thoughts of the diverse student body and celebrate the First Amendment, the spirit rock now stands as a stark display of freedom for all of campus to see.