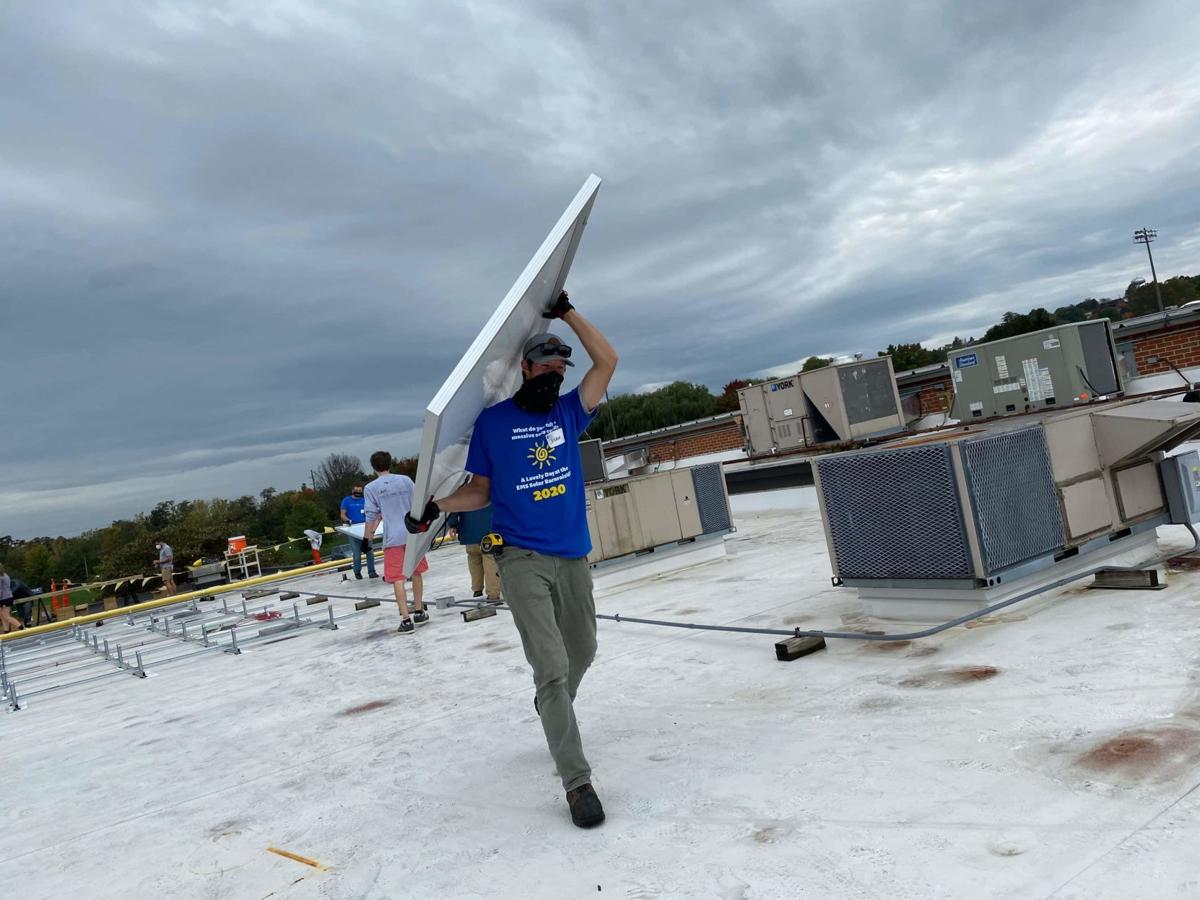 Joshua Kraybill, an EMS alumnus from the class of 2010 and Got Electric worker, carries a solar panel for installation atop the school roof. 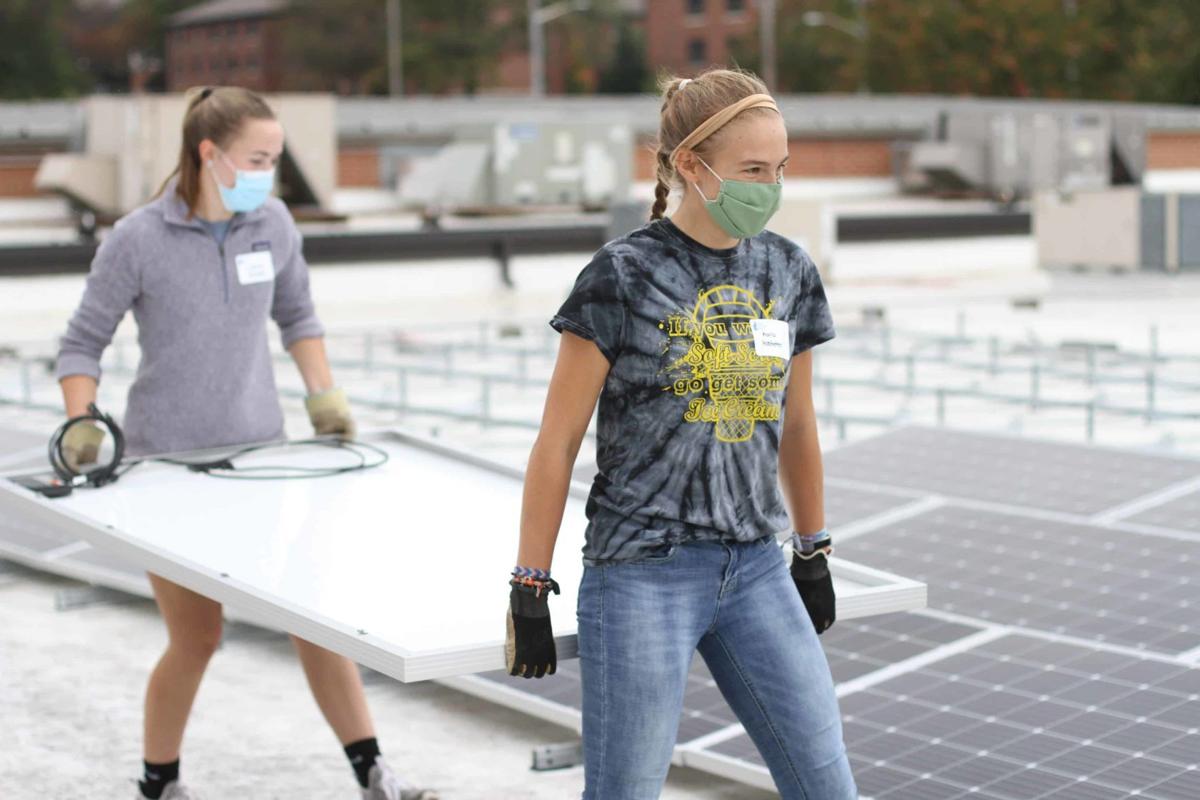 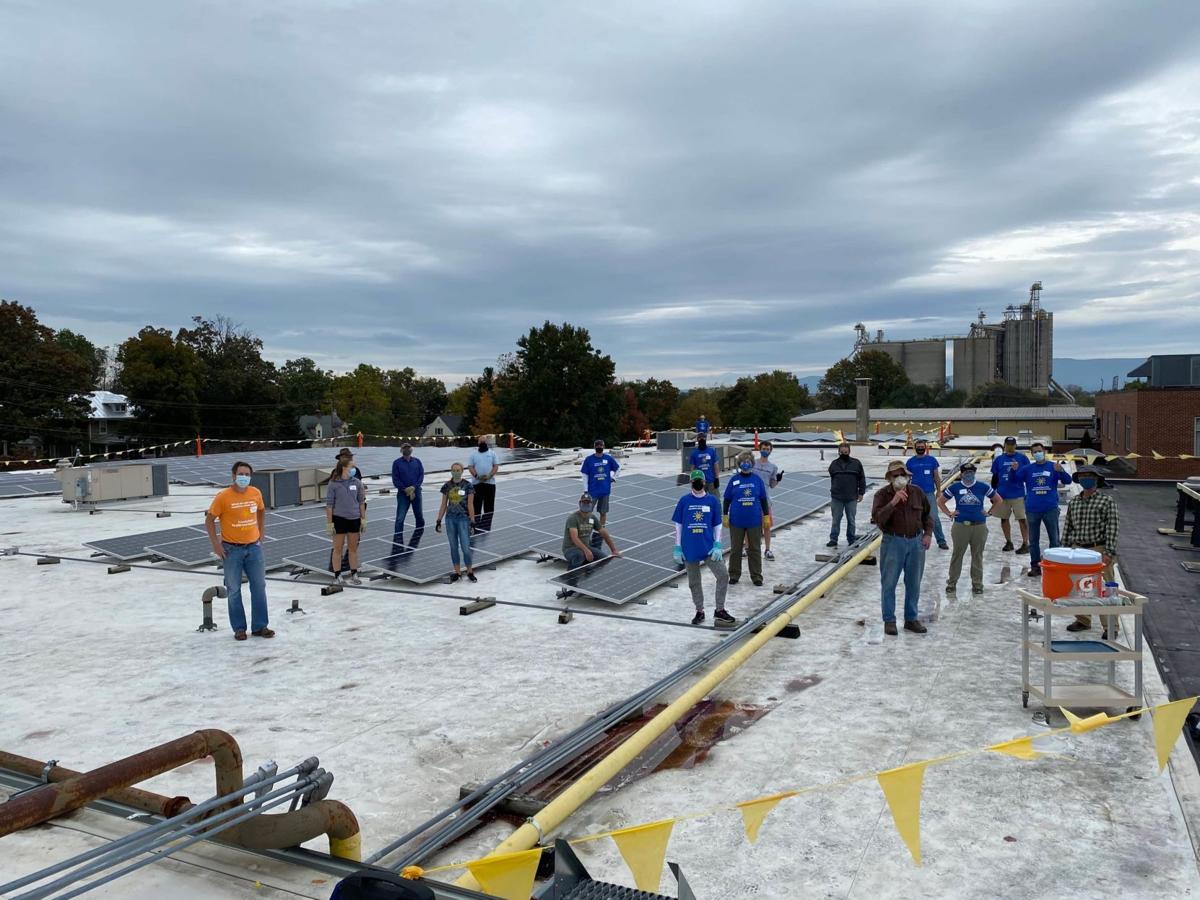 Approximately 45 volunteers came out to help install the solar panel system on the Eastern Mennonite School roof on Oct. 10. 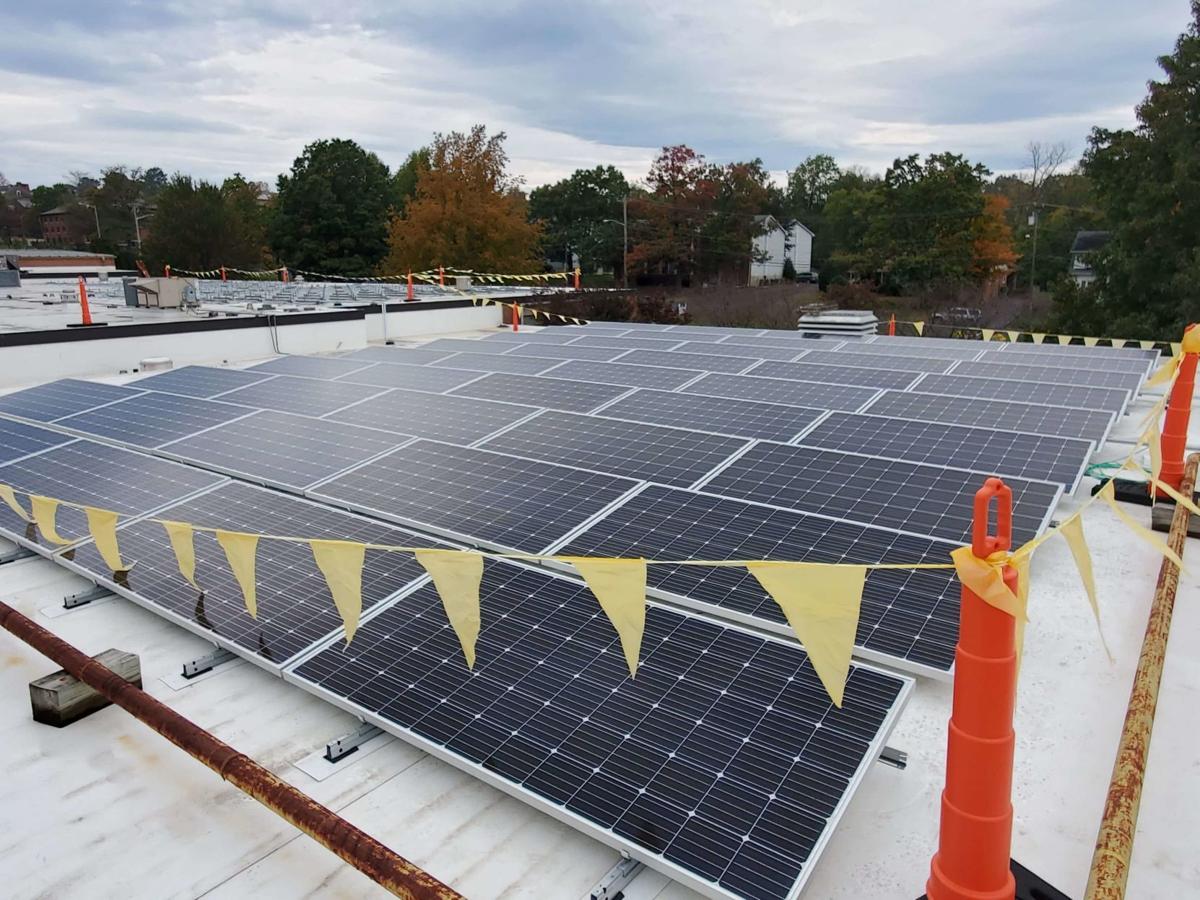 The solar array will offset nearly a third of the total electricity used by the Eastern Mennonite School’s facilities while generating enough clean energy to run the equivalent of 15 average homes and avoid more than 141 tons of carbon dioxide pollution per year, according to a release from EMS.

Joshua Kraybill, an EMS alumnus from the class of 2010 and Got Electric worker, carries a solar panel for installation atop the school roof.

Approximately 45 volunteers came out to help install the solar panel system on the Eastern Mennonite School roof on Oct. 10.

The solar array will offset nearly a third of the total electricity used by the Eastern Mennonite School’s facilities while generating enough clean energy to run the equivalent of 15 average homes and avoid more than 141 tons of carbon dioxide pollution per year, according to a release from EMS.

When farmers needed help in the past building a barn, the community historically came together for a “barn raising” as many hands make light work.

Harrisonburg preserves this timely tradition, not with rural construction, but in implementing solar panels at community establishments. Area residents gathered at Eastern Mennonite School for a solar barn raising on Oct. 10 to install 357 solar panels atop the school’s upper building, the largest K-12 solar array in the city.

Nearly 50 volunteers composed of students, alumni and neighbors worked alongside Got Electric workers to install the fleet in less than five hours.

The mounted solar arrays will generate a total capacity of 136 kilowatts of power and offset a third of the total electricity used by the school’s facilities and avoid more than 141 tons of carbon dioxide pollution per year, according to a release published by the school and energy company.

Secure Futures Solar is a Staunton-based agency that installs corporate systems and offers 20-year payment plans for nonprofits, so organizations like EMS only pay the difference saved from switching to solar. The developers have also installed panels in Augusta County, Eastern Mennonite University and Gift and Thrift as well as several other schools and businesses.

Secure Futures Senior Business Development Associate Loren Swartzendruber was the eighth president at Eastern Mennonite University and said the university was Secure Future’s first solar installment project in 2010. He said the process of bringing solar energy to EMS began more than one year ago, first by analyzing 12 months of electric bills to determine if solar will benefit the building.

“They don’t have to come up with any capital investment,” Swartzendruber said. “They will start saving money starting year one. They’re modest savings in the first year. It sometimes can be three, four, five thousand dollars in the first year.”

In the first 20 years, the company will maintain the energy system, providing support for EMS to generate electricity at a cost lower than typically available from its utility power provider, Harrisonburg Electric Commission.

Paul Leaman, head of school, also has solar installed on his home and said the school always looks at ways to be greener, such as recycling the shell of an old building when moving the elementary campus onto Parkwood Drive.

Senior Rahel Lema was among the student volunteers working to assemble the panels last weekend. With aspirations to pursue a degree in chemistry or biochemistry, Lema said Leaman invited her to participate and observe her studies applied to reality.

Lema said working alongside strangers brought together by mutual support for renewable energy and community contributed to the joy of bringing proactive environmental change to her school.

“[It] was really cool to see it come together and do what we believe in,” she said. “We use quite a bit of energy, so to be able to find that alternative and see those long-term effects, knowing it’ll be positive, is what I think is really great for our school and community.”

In addition to the solar panels, Secure Futures provides free lesson plans and materials created by the National Energy Education Development for hands-on applied learning about solar energy in studies such as science and economics.

Jeff Heie is a local advocate for solar energy and has volunteered in other solar barn raisings in Harrisonburg and abroad. He said the first local installation he was involved with was the 180 power-generating solar panels project at Gift and Thrift in 2013.

Heie said the events are opportunities for communal learning, harkening back to the centuries-old Mennonite tradition of barn raisings.

“There’s a lot of symbolism in it with people coming together to collaboratively help make this possible, and it’s also meant to be an educational experience for people who don’t know much about solar,” he said. “It’s their chance to get up on the roof and see how simple the technology is and demystify solar.”

The installment was previously planned for Aug. 7 but was pushed back due to the COVID-19 pandemic’s impact on the supply chain and delayed shipping.

Leaman said EMS ran a fundraiser for the solar power installation at the end of the year but cut it short when pandemic concerns arose, but it raised more than $100,000, which Leaman said should grant the school full ownership of the system in about six years.

While the system is financially beneficial to the school, Leaman said the greatest benefit is introducing students to real-time renewable energy and demonstrate the feasibility of installation to the broader community.

“Just the visibility of them being on campus will be hopefully inspirational to students and aspirational in terms of having a tangible change on their lives as they get older,” he said. “ We really wanted to emphasize that this is doable. It’s doable for an organization. For a fairly large array, for a small business. It’s doable for residents.”