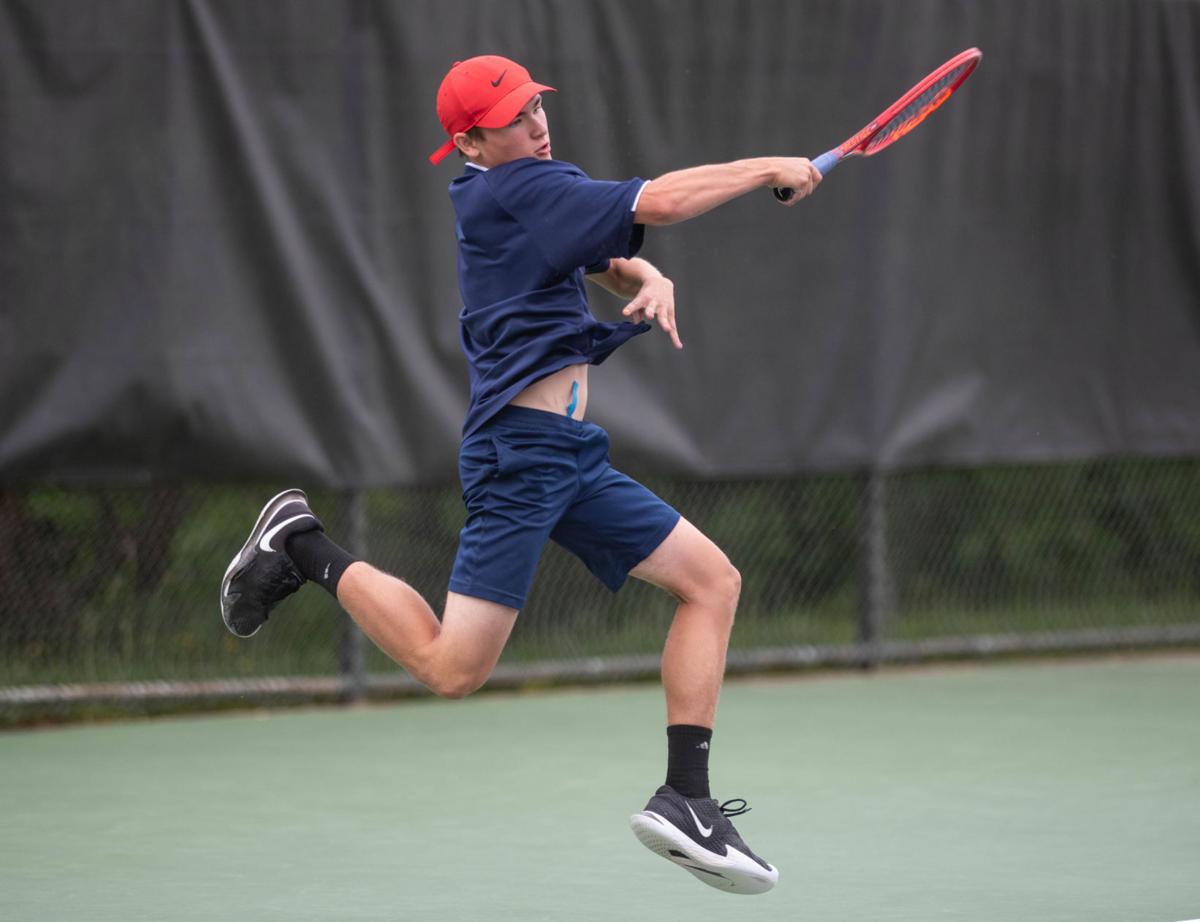 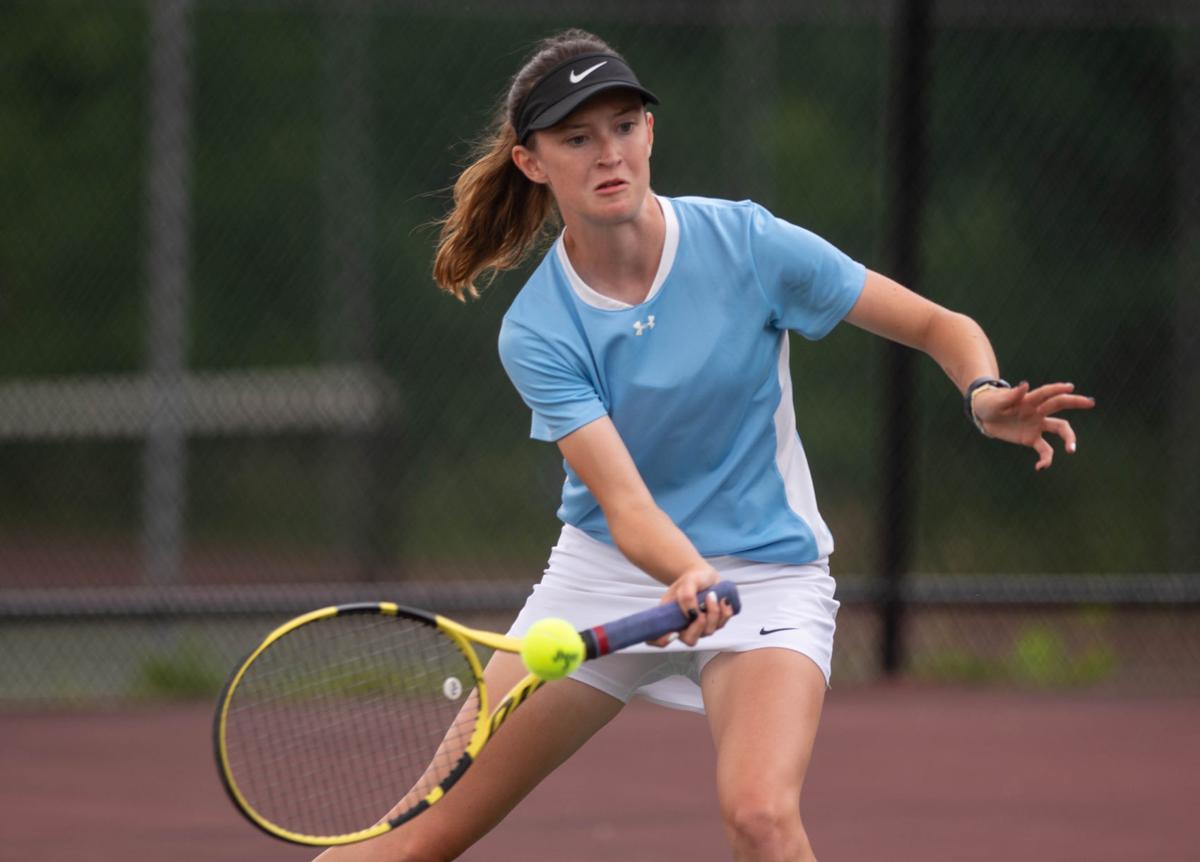 Page County’s Grace Knighton volleys the ball back to East Rockingham during the Region 2B doubles tournament in Penn Laird last week.

Page County’s Grace Knighton volleys the ball back to East Rockingham during the Region 2B doubles tournament in Penn Laird last week.

Facing pressure is something Keenan Glago said he’s used to as a quarterback on the gridiron.

As the signal-caller for the Harrisonburg football team, Glago was thrown into the starting lineup after a slow start during the 2019 season. But since then he has led the Blue Streaks to back-to-back appearances in the Region 5D playoffs.

“There’s definitely some nerves but I think between Corey’s tournament experience and my experience as a football player, we both know how to handle nerves in the midst of competition,” Glago said. “We know how good the competition will be but at the same time, we are going into the match confident. We know how we play and what works, so we are just going to just stick to that game plan and trust what has kept us undefeated thus far.”

Glago and Beshoar are two of a handful of locals participating in this week’s VHSL tennis tournaments. While the Blue Streaks duo will play at Huntington Park, Page County’s pairing of Grace Knighton and Taylor Jenkins, Stuarts Draft’s Mark Gordon and Eric Young and the Riverheads duo of Emma Staton and Claran Massie will all play at Virginia Tech.

“I’m really excited to play in the state tournament,” said Knighton. “I’m ready to see some amazing players and represent Page County to the best of my ability.”

Knighton will play Randolph-Henry’s Grace Algeier in the singles semifinals on Saturday at 9 a.m., but will pair up the day before with Jenkins in the doubles semifinals against Algeier and Mary Scruggs on Friday at 9 a.m. as well.

“I’ve really enjoyed playing doubles with Grace because we always have each other’s back,” said Jenkins, who has been playing since her freshman year. “In tennis, it’s easy to let one bad shot get in your head and drag you down. That’s why I like doubles, because you always have a partner to encourage you after a lost point. We’ve been friends for a long time, but we’ve also grown to really know each other as players and that has helped us make it as far as we have.”

Knighton went 6-3 as the Panthers’ top singles player this season and was often paired with the No. 4 player on doubles throughout the regular season. Ever since she joined Jenkins for the postseason, the duo is unbeaten.

“The biggest key to my success this season has been working on patience,” Knighton said. “I like to hit a big ball, so I make a lot more errors but this year has made me change that way of thinking. I can see now what everyone has been telling me for the past three years, so I’m really grateful for that.”

Glago and Beshoar, who are close friends off the court, will play in the Class 5 boys doubles tournament Thursday at 3 p.m. at Huntington Park in Newport News against Thomas Jefferson High School for Science and Technology.

“I’m really excited to be playing in my first state tournament,” Beshoar said. “This means a lot to me because I had my whole season taken last year. It’s an honor and a privilege to have made it this far. ... Going into this state tournament, I have a lot of confidence and determination. There’s no reason to be nervous. Of course it is a big stage, but I’m really out there to enjoy myself.”

It’s no surprise Beshoar finds himself at the state tournament after going unbeaten this season in singles matches before suffering an injury that forced Glago to play in the top spot for the Region 5D singles tournament last week.

Glago’s only singles loss came in the regional championship as he is now 11-1. Beshoar is a perfect 12-0 — and in doubles matches the duo is unbeaten.

“I think [HHS] coach [Josh] Rodgers has had a huge impact on Corey and I’s success,” Glago said. “At the beginning of the season, he recognized our potential as a doubles team and made that our only focus. He kind of recognized how well our games fit doubles and how rare it is to have two players that can play like we can. Corey and I have been basically only been training doubles in practice all season. I didn’t really know anything about doubles strategy and now I feel more comfortable as a doubles player than singles and that’s because of him.”

Draft’s Gordon, a senior, will play in the Class 2 boys singles semifinals against Poquoson’s Luke Gibson on Saturday at 9 a.m. at Virginia Tech. Gordon will pair up with Young to take on Gibson and Andrew Lombardi in doubles on Friday.

“I’m very excited to play in the states tournament and it means a lot to me as my hard work has paid off,” Gordon said. “I’m excited to represent Stuarts Draft as the first male tennis player to make it to states. I wouldn’t describe my emotions as being nervous, I am just really excited to have made it this far.”

In the Class 1 girls doubles semifinals, the Riverheads duo of Staton and Massie will take on Middlesex’s Maddie Green and Virginia Reinhardt on Thursday.

“I think it still hasn’t totally set in that we’re actually going to states,” Jenkins said earlier this week. “I hope that I’ll be able to put the idea in my head that this is just another regular match without any higher stakes. Other than the nerves, I’m unbelievably excited to have such an opportunity and I really hope we can bring home our first state title for girls tennis.”

Bringing home a state championship is the win for every player entering this week’s VHSL singles and doubles tournaments. There are no local teams after both East Rockingham squads and the Riverheads girls fell earlier this week.

“I know everyone there is going to be good,” Knighton said. “I think I’m still shocked that I actually made it because I’ve never made it past the first round of districts before. I’m just going to go in not expecting to win or lose. I just want to play my best. Although, it would be pretty cool to win.”

When players step on the court this week, whether it be in Newport News or Blacksburg, the stakes will be higher than they’ve ever been this season.

“We are both competitors and no matter how good the competition, we are going in with the goal of winning,” Glago said. “They are going to be good, but we are going to come in with something to prove and try our best to surprise some people.”