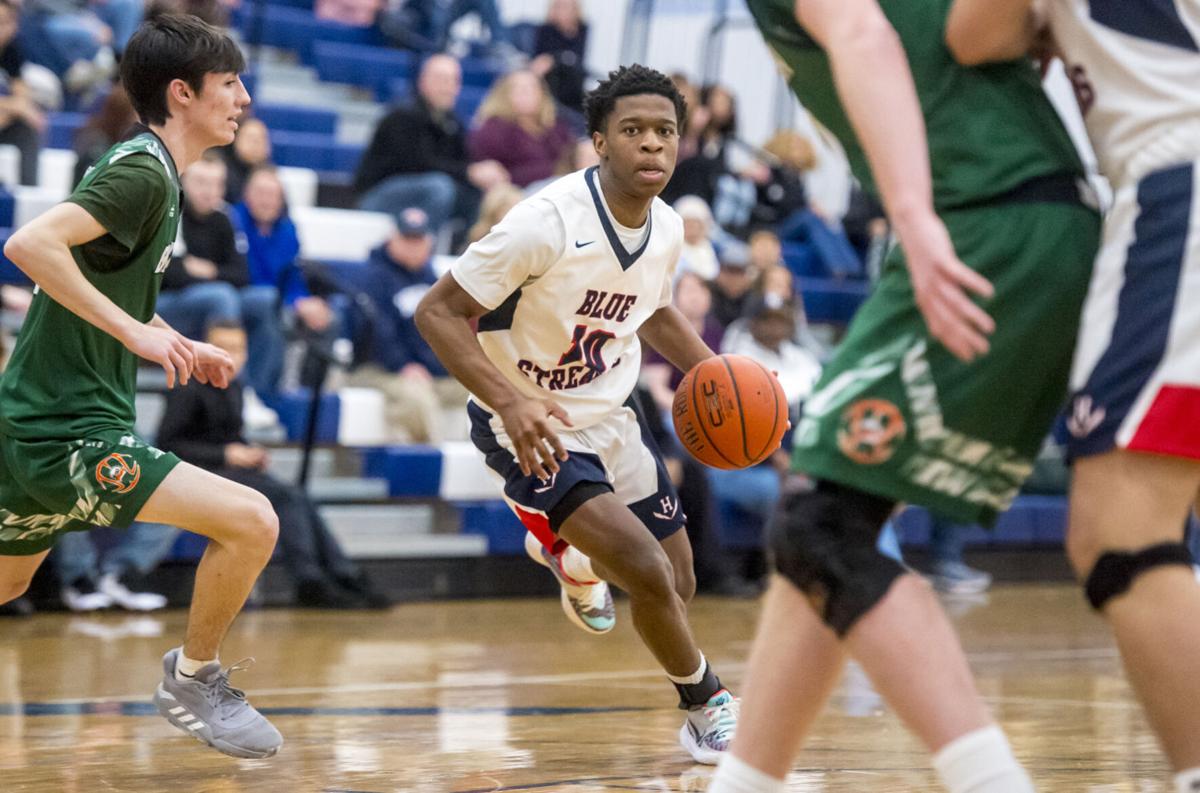 Harrisonburg’s Jaziel Mensah-Agyekum looks for a route to the basket through Broadway traffic. 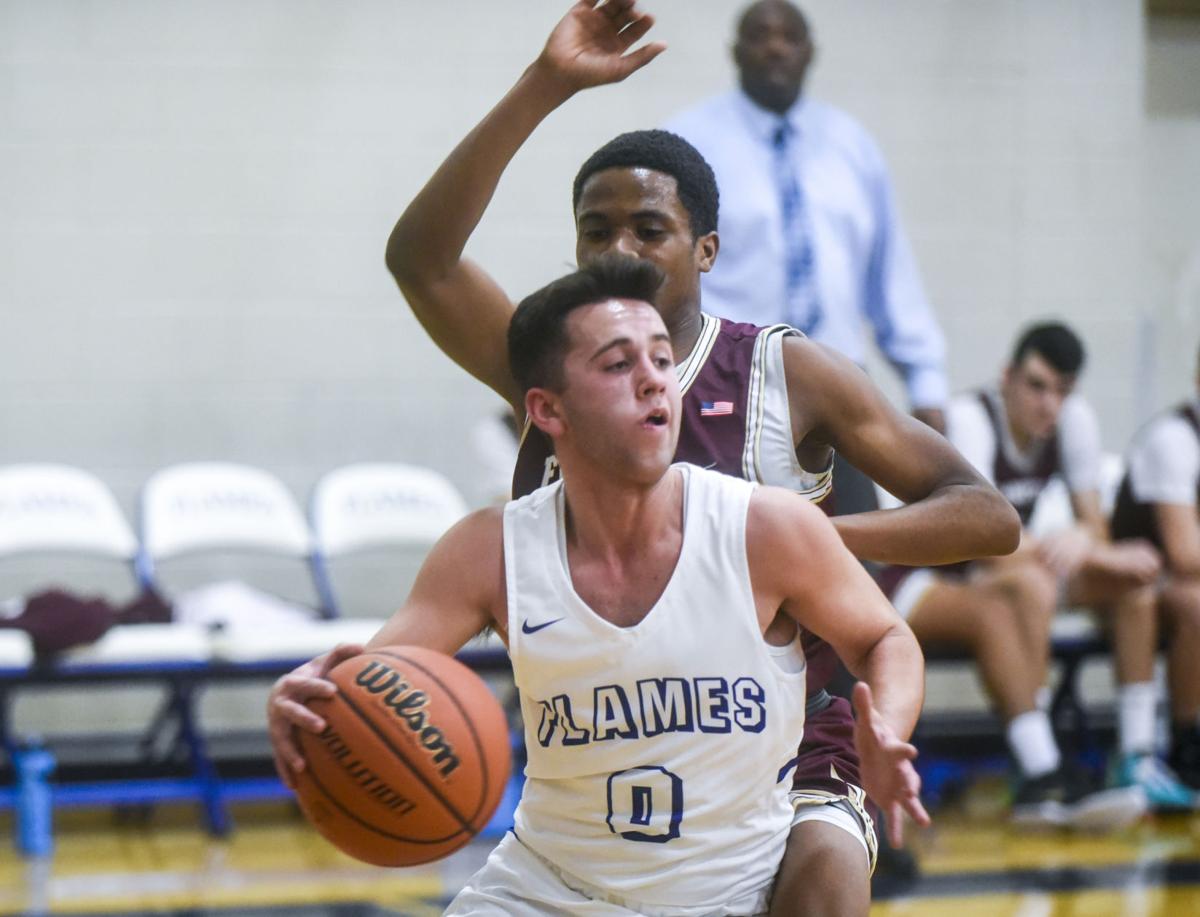 Harrisonburg’s Jaziel Mensah-Agyekum looks for a route to the basket through Broadway traffic.

If there’s anyone who understands the process, it’s Don Burgess.

The current Harrisonburg boys basketball coach was a standout at Radford University during his playing days and had several coaching stops at various levels before eventually being named the men’s basketball head coach at Bridgewater College for seven seasons from 2008-2015.

So as Burgess traveled to various AAU tournaments this summer with his son, Jadon, he quickly realized the toll COVID-19 was taking on high school athletes that are looking for future opportunities at the college level.

“Being a former college coach, my wife and I were like, ‘Man, it stinks that these kids aren’t getting the opportunity to be seen. How can we do it in a safe manner?’” Burgess said. “It pains me going to these events and seeing kids just playing to play.”

This weekend, Burgess will provide that opportunity for players from around the Shenandoah Valley and the entire state when the inaugural Tropical Smoothie Shootout takes place at Horizons Edge in Harrisonburg on Sunday.

The event will feature 16 teams with recruits from the 2021, 2022 and 2023 classes. Burgess said over 20 college coaches from the Division II, Division III and JUCO levels have committed to coming and he expects more.

Eastern Mennonite, Bridgewater, Shenandoah, Lynchburg, Ferrum, Millersville, Bluefield, Glenville State and many others are among the list of colleges expected to be in attendance. With some of the top scouts from across the state also expected to make the trip to Harrisonburg, it provides an opportunity for athletes to finally be seen.

“The reality is the majority of recruiting occurs with AAU,” Spotswood coach Chad Edwards said. “It’s been that way for quite some time and remains so during COVID. With the restrictions placed on high schools, AAU and private trainers are the only places kids can go to improve in an organized setting.”

“Most of the evaluation process by college coaches takes place at those events,” Keyes said. “It certainly has taken a bigger role this year because of restrictions of what we can do at school. If a kid wants to play live competition, he is playing at a travel or AAU event. I feel for the kids that maybe can't afford to go to a trainer or pay fees to play travel tournaments. Those kids are getting two days a week with us in the gym, but are missing out on opportunities to compete because we can't play live right now.”

Chad Seibert is the boys basketball coach at Eastern Mennonite, but also serves as the program director for Blaze Basketball — one of the area’s top AAU programs. He said he liked how the NCAA had started to steer recruiting more toward the high school programs last year, but said COVID-19 certainly has slowed down that process a bit.

“I think the high school product can be a better product,” Seibert said. “You see more team play, see teams that have more chemistry, more depth to how to they play. This is really the only thing going right now, though, so it does put an increased focus on it. With the uncertainty of the winter, these opportunities right now are absolute gold for these players to be seen."

“I'd like to thank Coach Burgess for organizing this event,” Edwards said. “It gives Shenandoah Valley players the chance to play in a quality showcase event for an affordable price without having to travel far. I sincerely appreciate Coach Burgess’ willingness to use his college experience and connections to help promote Shenandoah Valley basketball. Before Coach Burgess created these events, Valley kids had no local out-of-season opportunities to showcase their skills in front of college coaches.”

Burgess said fans will be required to wear masks on Sunday and social distancing will be enforced. He said he’s hired a “COVID crew” to sanitize the basketballs and bleachers regularly and players are encouraged to wash their hands and use hand sanitizer regularly throughout the day.

“My wife and I are just here to provide an opportunity,” Burgess said. “The game of basketball has provided me a lot of opportunities. This is just a way to give back and hopefully the right coaches will see them and they can use basketball as a vehicle to get an education.”

Interest in the game of basketball has been peaking recently with tournaments still taking place despite COVID-19. Despite the uncertainty still surrounding the scheduled restart of the Virginia High School League season in December, the travel circuit has provided a safe and clean alternative for recruits to get noticed.

“I think basketball interest in our area has always been high,” Keyes said. “It is evident by the amount of great players that have come through the area, as well as the quality programs in the area that compete at the state level on an annual basis. Kids love to play basketball.”

Edwards said with many multi-sport athletes not able to play football during the fall, it has allowed more local athletes to participate in showcase events such as the Tropical Smoothie Shootout than previous years. He said he believes that’s a positive for the local product that will take the floor this winter.

“Coach Burgess has done a great job of organizing this event for the local players in our area to compete,” Keyes said. “The talent level will be high and it should be a great day of basketball.”

The talent level around the Valley right now is primarily what led Burgess to create the Tropical Smoothie Shootout, which he said will host a second session on Nov. 21.

He knows the process of reaching the college level, both as a player and a coach, and now he’s ready to help current players learn the same.

“The biggest reason I’m putting this on is to provide the players an opportunity to play in front of college coaches,” Burgess said. “Some of these kids are traveling all over the place and playing in a middle school where there’s no college coach at. There are so many kids playing, but we have so much talent sitting here in the Shenandoah Valley.”