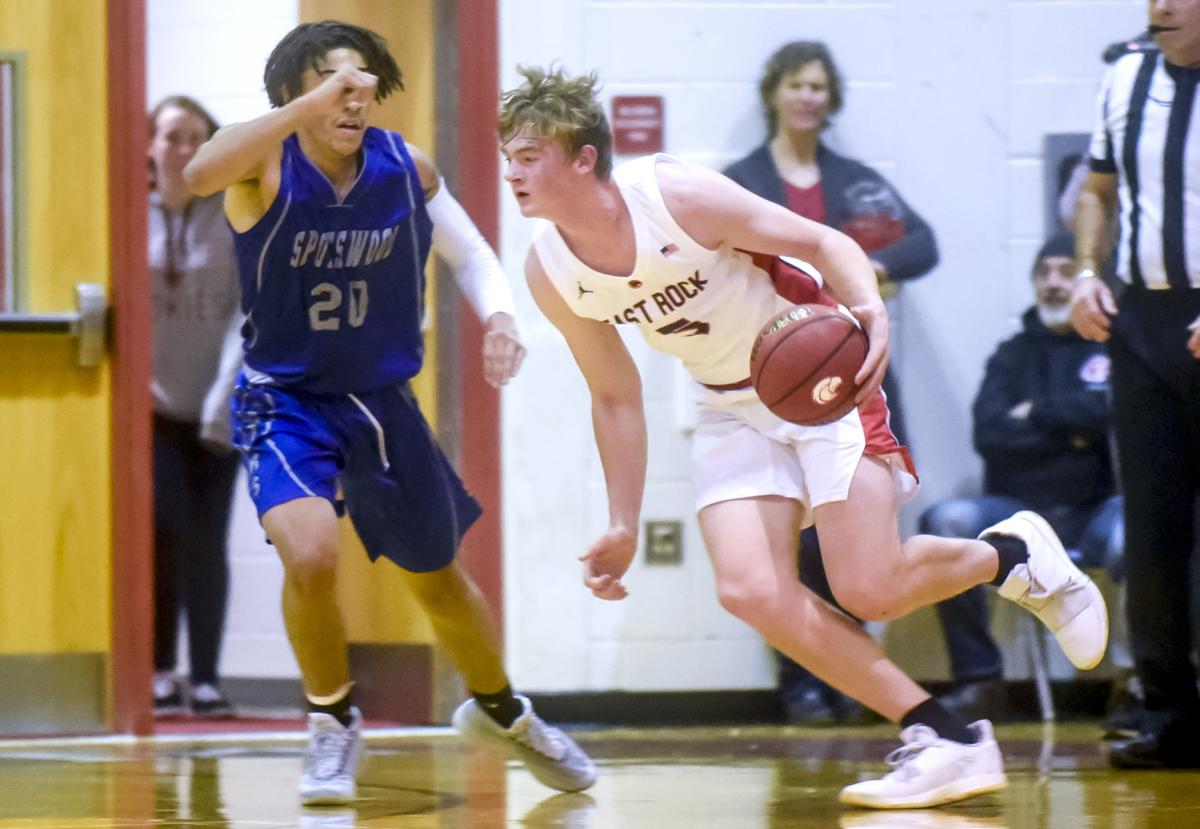 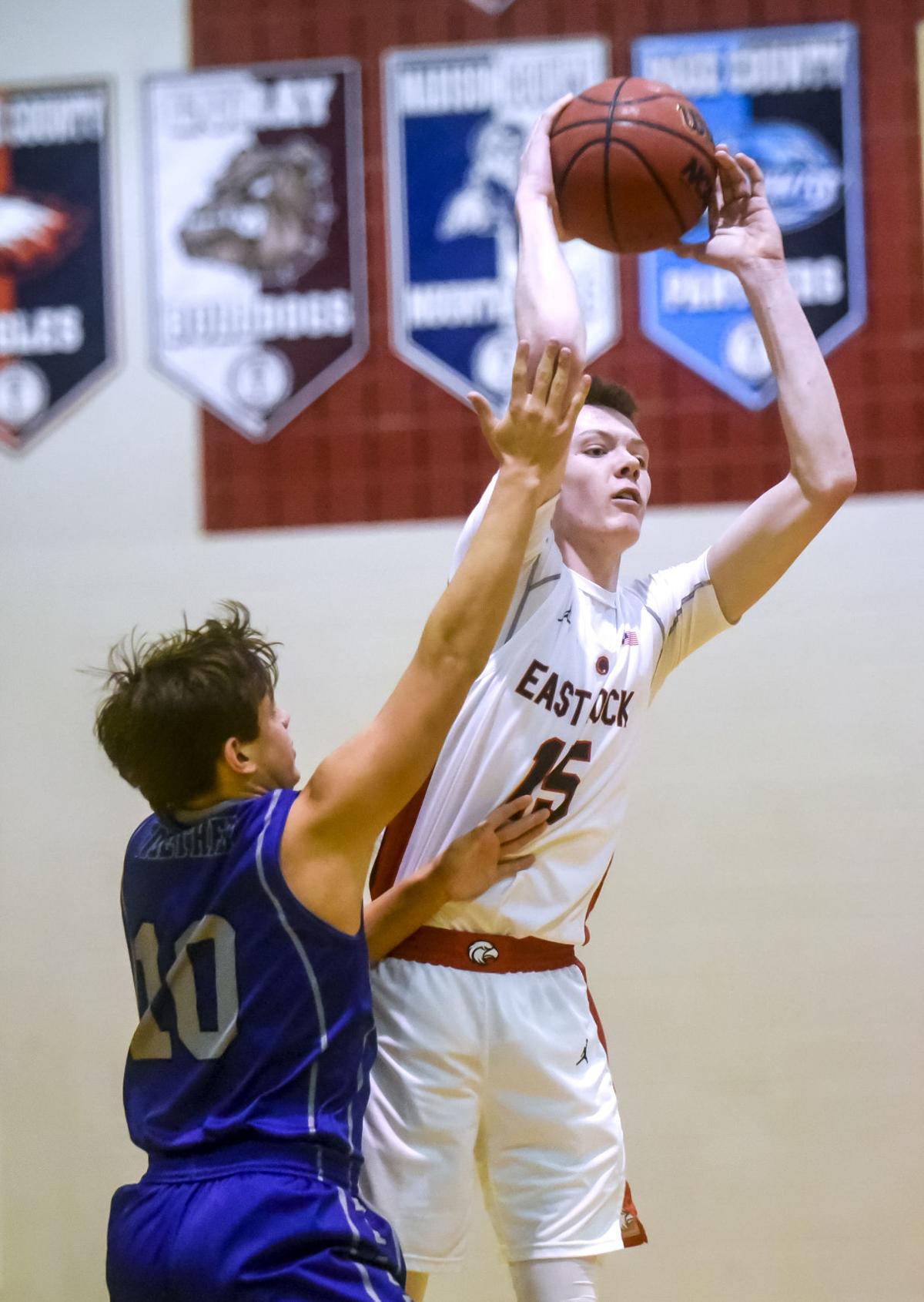 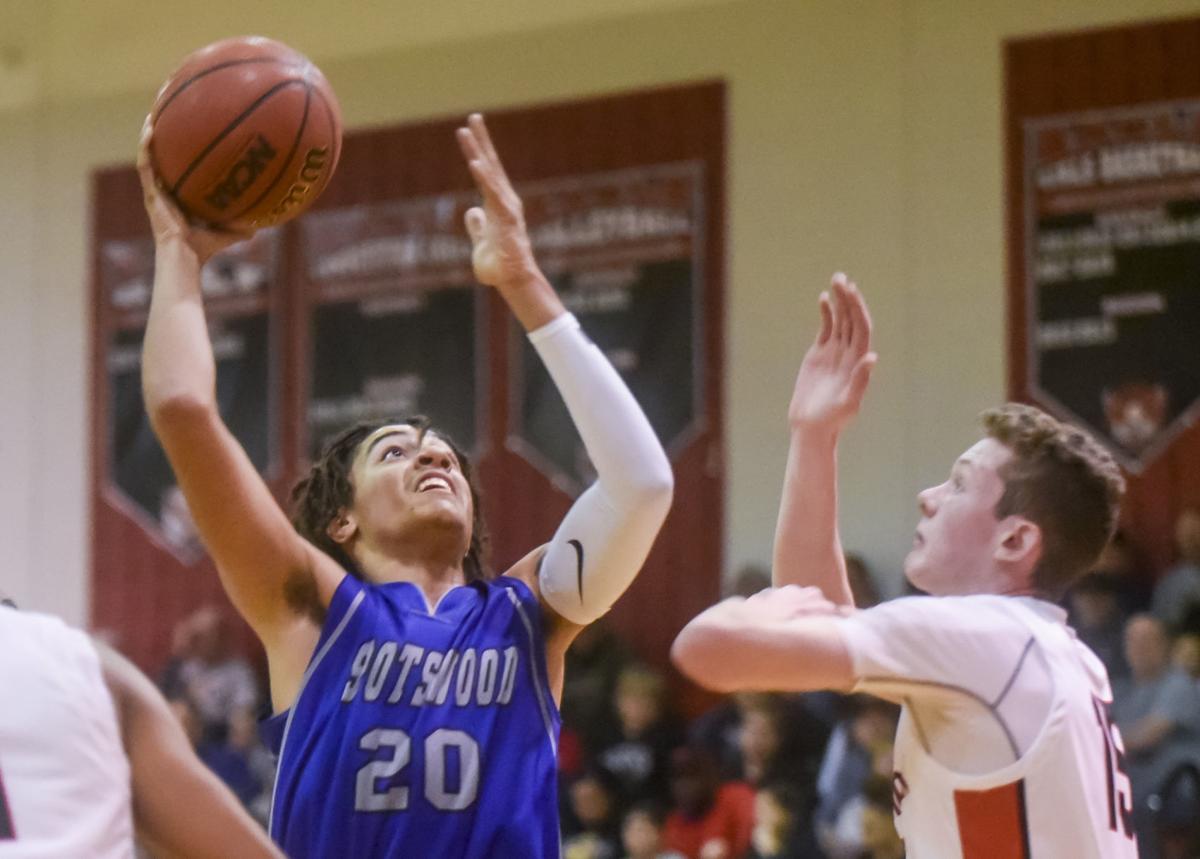 Spotswood’s Traevan Williams goes up for a shot over East Rockingham’s Kyle Evick.

Spotswood’s Traevan Williams goes up for a shot over East Rockingham’s Kyle Evick.

ELKTON — After various Spotswood defenders draped around him for much of the first half, frustration was visible on Tyler Nickel’s face as he walked toward the locker room.

That frustration, however, quickly turned into determination as Nickel scored 30 of his game-high 39 points in the second half to help East Rockingham take down rival Spotswood 76-67 in a non-district boys basketball thriller in Elkton on Wednesday.

The victory completed a season sweep of the Trailblazers by the Eagles for the first time in program history. East Rock, which opened in 2010, earned its first-ever win over Spotswood last season.

“We talked about that at the beginning of the year,” Eagles fifth-year coach Carey Keyes said. “That was one of our goals. Obviously, it’s tough to beat them once. I’m just super proud of our guys and their fight. We have so much respect for [the SHS] program.”

Just over two weeks since seeing a back-and-forth game versus Broadway on Dec. 30, the fans in Elkton enjoyed another treat as two of the area’s best teams exchanged blows.

The Eagles once again jumped out to an early lead on the Trailblazers — much like they did in their first meeting — but Spotswood came roaring back in the second half again.

After trailing a majority of the first half, the Trailblazers went on a 12-2 run that stretched across the second and third quarters and eventually took a brief two-point lead.

“I thought it was a great high school basketball game,” said Keyes, who helped lead Spotswood to the area’s last boys basketball state championship in 1992. “It was a packed gym, two teams that respect each other and just going at it. We started out with a great run. They came back with a great run. I thought in the fourth quarter, we played our best quarter of the year. Every possession, we scored or got a good look.”

The two teams exchanged baskets in the third with neither team playing particularly well on the defensive end. But back-to-back buckets just before the end of the third quarter to cut the Trailblazers’ lead to 50-49 was a bad omen for what took place in the fourth.

“A little bit of it was just realizing the time and situation and that something had to change,” Nickel said. “I was just like, ‘I can’t keep letting this go downhill like this.’”

After being held to nine points in the first half, Nickel found a groove with 10 in the third.

In the fourth, however, the 6-foot-7 sophomore took over as he went on a personal 8-0 run and scored 20 points in the final frame as the Eagles scored first and never trailed.

“Sometimes when things get stagnant, someone has to step up and change the dynamic,” said Nickel, who had a career-high 45 points in the teams’ first meeting. “They had done a really good job with their defensive scheme in the first half and I realized what they were doing to be successful. I just had to change what I was doing.”

The closest the Trailblazers got in the fourth was 53-52 on a bucket from Rob Smith, but East Rockingham continuously responded with tough shots from Nickel and a big corner 3 from Cooper Keyes. The Keyes’ trey with 5:22 remaining put the Eagles up by five.

“If I miss a shot, I can’t really think about it,” Cooper Keyes said. “It’s on to the next play and getting back on defense. If you play hard on defense, you’ll eventually make shots.”

Although Nickel shined, the play of Cooper Keyes and Kyle Evick, among others, was something that left Carey Keyes happy as he continues to build the depth on his squad.

“You have to have a short-term memory as a basketball player, especially as a shooter,” Carey Keyes said. “Cooper and Kyle both need to make open 3s for us because Tyler and Tyce [McNair] get so much attention, double teams and help off of them. They have good looks. They just have to step up and make them. Both of them hit big shots tonight.”

After giving up 45 points in the first meeting, the Trailblazers once again struggled to find an answer for Nickel late after defending him well early on in the contest.

“You have to give him credit,” Edwards said. “Our game plan was to give him two distinct looks to hopefully keep him out of rhythm. If you watched the game, you can see he was obviously in a rhythm there in the second half. Give Coach Keyes credit and then give Tyler a lot of credit for hitting some tough shots and rising to the occasion.”

Both teams are considered amongst the best in the state in their classifications.

Despite three early season losses to tough competition — twice to the Eagles and once to Miller School — Edwards said he has seen progress from Spotswood this year.

“I do think we’re getting better,” Edwards said. “By the end of the year, we’re going to be a very good ball club. My message is that everyone in our program, starting with me, needs to be desperate to get better. If every person in our program can improve just a little bit, I think we can be a handful when we get to February. That’s our goal.”

Smith led the Trailblazers (5-3) with 20 points while Ryan High had 16, including a vicious one-handed dunk. D’Andre Good and Traevan Williams had eight each.

As Spotswood now prepares to enter Valley District play, where it is the seven-time defending champions, Edwards said his squad needs to learn how to quickly refocus.

“We can’t feel sorry for ourselves,” Edwards said. “The Valley District means a lot to us. I think our out-of-season schedule has prepared us well, but if we dwell on this too much and don’t look forward, [Turner Ashby] and their new coach [Bryan Mathews] are doing a good job. If we don’t come ready to play, we’re going to have our hands full.”

As for the Eagles, the win was another step toward becoming an elite team this season.

McNair, who served as the point guard on last year’s state runner-up team, said the confidence of both the team and himself is on the rise as they continue to earn wins.

On Wednesday, he finished with 14 points, 10 rebounds and seven assists in the win.

“It grows a lot,” McNair said. My goal is to play college basketball and the only way to get there is to be able to shoot and get to the rim. My confidence is just growing every day. Spotswood has always gotten us at least once.It’s a really big step for us.”

It was the third time this season that Nickel has stepped up on the big stage.

He dropped a career-high in scoring in the first meeting against the Trailblazers and then had 32 in a win against Broadway that avenged the Eagles’ only loss this year.

“That’s what you expect out of him when the game is on the line,” Keyes said. “I expect him to play like that. He had a look in his eye there in the fourth quarter. He wanted the ball, so we kept calling sets for him.”

As the final seconds ticked off the clock and the East Rockingham home crowd roared in excitement, Nickel raised his hands in the air and clapped in celebration.

The frustration from the first half was suddenly missing from Nickel’s face as he smiled.

Instead, he said, it had suddenly turned to a look of satisfaction as the Eagles completed a season sweep of their U.S. 33 rivals for the first time in program history.

“Sometimes if you want to see yourself as a high-level player, you have to step up at high-level times,” Nickel said. “I felt like that’s what I did tonight.”