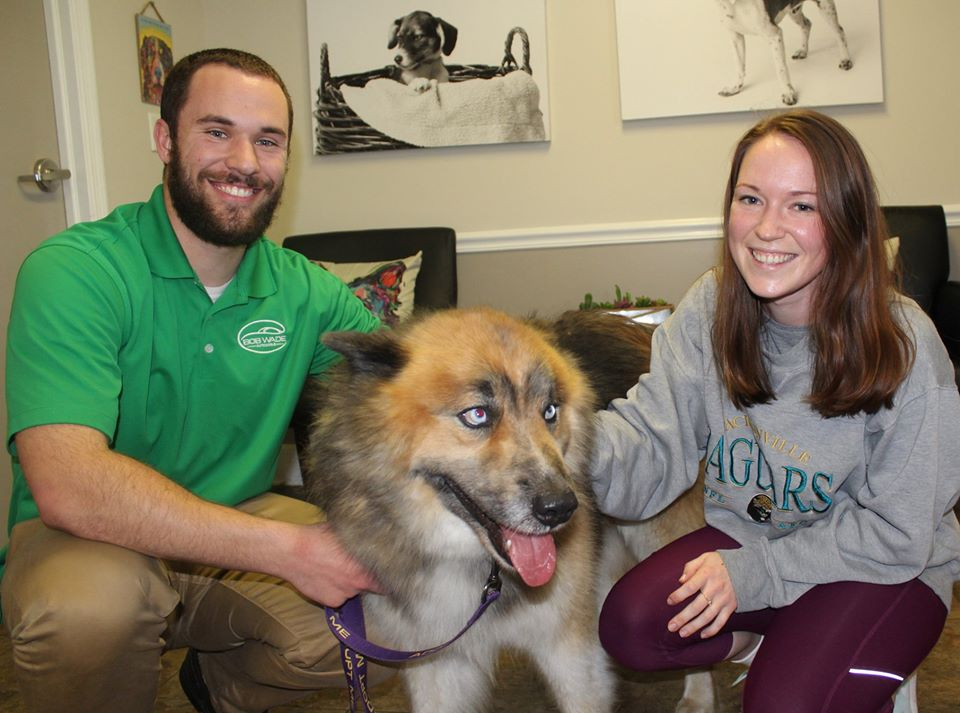 Taylor McNelis, left, poses with his new best friend, Tormund, a husky-Alaskan Malamute-Great Pyrenees mix he adopted from Anicira in Harrisonburg three weeks ago alongside his girlfriend, Hannah Bradford. 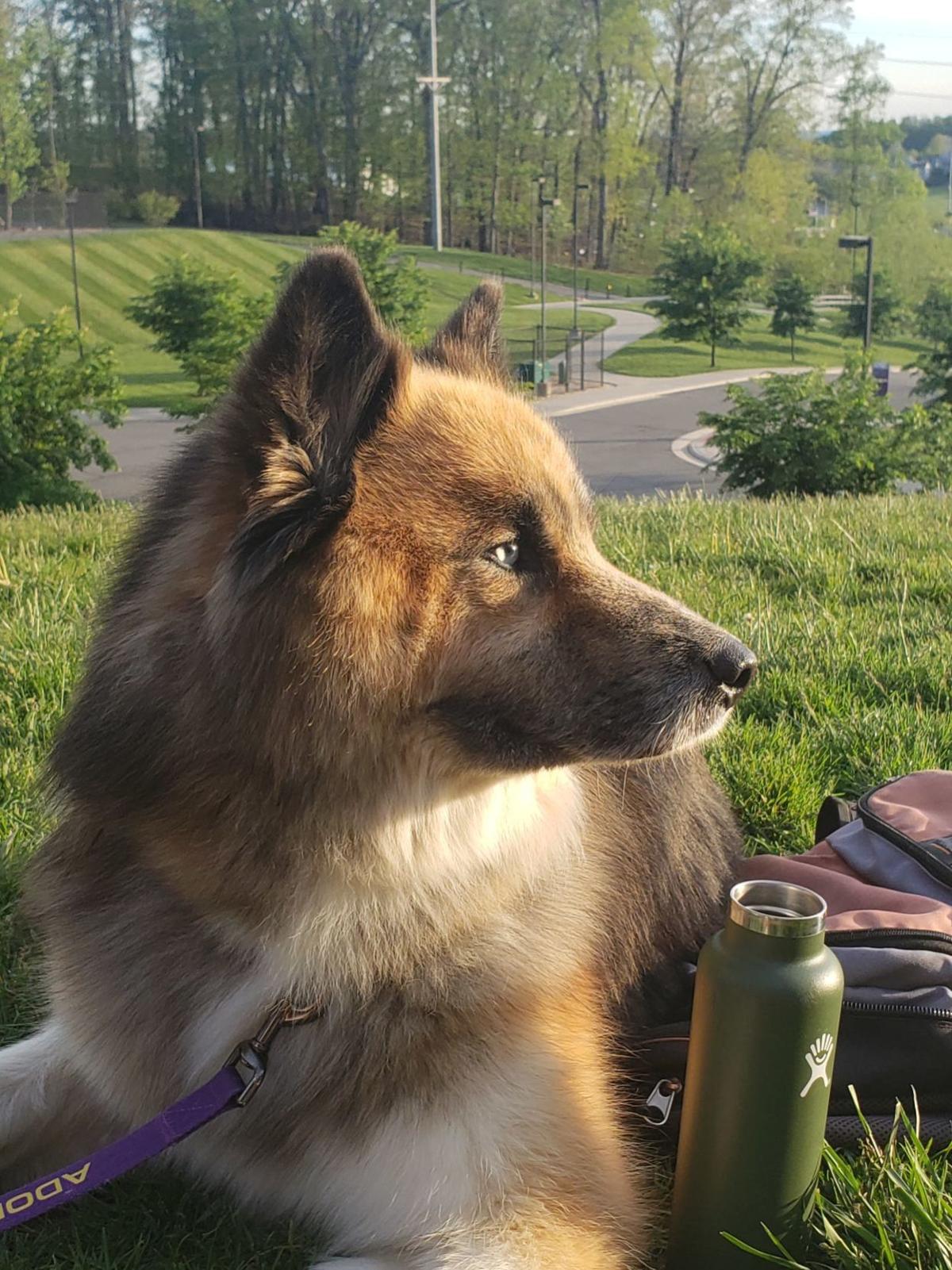 Taylor McNelis said he lives a mildly active life and Tormund is a happy companion who enjoys tagging along leisure adventures but prefers to spend the days curled up by his side on the couch. 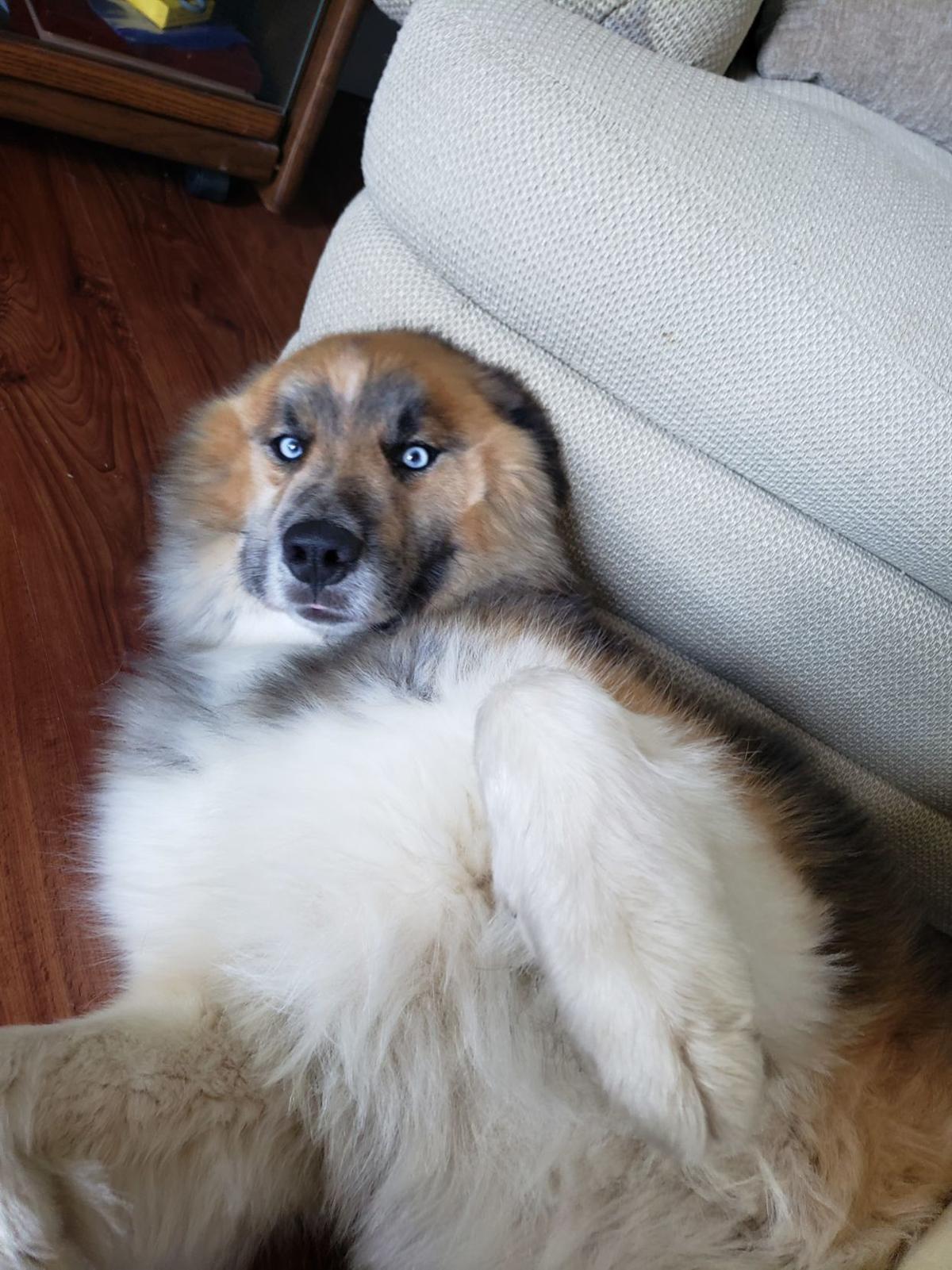 Just one month ago, Tormund was rescued from a backyard breeder’s home in Southwest Virginia where he was crowded with several other dogs and never taught to play. Now, he is learning the ropes of doggy toys with McNelis.

Taylor McNelis, left, poses with his new best friend, Tormund, a husky-Alaskan Malamute-Great Pyrenees mix he adopted from Anicira in Harrisonburg three weeks ago alongside his girlfriend, Hannah Bradford.

Taylor McNelis said he lives a mildly active life and Tormund is a happy companion who enjoys tagging along leisure adventures but prefers to spend the days curled up by his side on the couch.

Just one month ago, Tormund was rescued from a backyard breeder’s home in Southwest Virginia where he was crowded with several other dogs and never taught to play. Now, he is learning the ropes of doggy toys with McNelis.

In the past, you might have met your best friend sitting side-by-side on the bleachers at a sporting event or partnered in grade school. But the 21st century has invited technology as an alternative means of connecting, bonding and establishing friendships. For Taylor McNelis, meeting Billie was happenstance, or maybe fate, but he said he knew Billie was the perfect pal for him as soon as he saw his picture on Facebook.

“I wasn’t really looking, to be honest,” McNelis said about finding his new best friend. “I actually saw the picture of Billie on their Facebook story and immediately sent them a message like, ‘Hey, I want to meet this dog when he’s available for adoption.’ Seeing the right dog made me want to adopt.”

Billie, a husky-Alaskan Malamute-Great Pyrenees mix rechristened as Tormund after the Game of Thrones character, joined McNelis’ family three weeks ago, but McNelis said adopting a dog, and a big fluffy one at that, was not a priority for him a few months ago.

During his childhood, McNelis grew up with a rottweiler and an Australian shepherd-mix, so he had toyed with the idea of adopting a pet before but never felt confident in what he wanted or when was the right time and place. Working at Bob Wade Subaru, McNelis had worked alongside Anicira several times for the dealership’s annual pet adoption event. Following the animal center on Facebook, he had passed along ideas of what type of dog he imagined would best pair with him lifestyle, but Tormund was love at first sight.

While each pet-owner relationship and story is unique, McNelis is far from alone in welcoming a new pet into the family this month.

Rockingham-Harrisonburg SPCA reported a 25% increase in adoptions this year.

Today is National Rescue Dog Day, a holiday dedicated to raising awareness of the benefits behind adopting a pet and spreading education about the number of dogs in need of forever homes.

According to the American Society for the Prevention of Cruelty to Animals, approximately 3.3 million dogs are sent to shelters every year and 670,000 shelter dogs are euthanized annually. The good news is reports show those numbers are on a declining trajectory, and 1.6 million dogs are adopted nationally every year.

“We’ve not seen the same surge as we did last year. In 2019, we took in almost 30% more animals into our care as we did in 2018. Whereas this year, as with shelters across the nation, we’ve seen a decrease in intakes, particularly for us compared to last year since we saw such a huge surge, related to COVID-19,” he said. “People are being less out and about as well as for the protection for animals that, unless for the protection of the animal, animal control officers are being asked to try to mitigate in taking to a shelter.”

Anicira is a vet clinic and adoption center with locations in Harrisonburg and Manassas. The local center receives animals from Lee County Dog Pound, a shelter in rural Southwest Virginia, and proceeds from Anicira adoptions fund the organization’s two full-service clinics and pet food pantry.

Marketing and Communications Manager Katie Nicholson said intake numbers from the shelter have dropped from 175 between February 1 to May 19 of last year to 88 this season, but adoption inquiries have dramatically increased.

“Rescuing a pet will save a homeless animal’s life. Adopting from a rescue decreases the homeless pet population. There are millions of homeless pets in the United States and adopting obviously decreases that number,” Nicholson said. “It’s an incredibly rewarding experience. Adopt a rescue pet, you’ll receive unconditional love, a new best friend and a constant companion.”

Nawaz said the majority of issues with animals first arriving at the center are physical malformities such as dental decay, but RHSPCA also works to mend any emotional wounds before adoption. Recently, the shelter took in a stray chihuahua with heightened anxiety who refused to be handled so to prepare her for adoptability, it has vetted her and placed her in a safe foster home to be surrounded by love and unlearn her defense mechanisms.

McNelis said Tormund was rescued at 3-years-old from a backyard breeder where he was cooped up with several dogs and seemed deprived of playing, but Tormund has steadily become comfortable picking up bones and toys over the past few weeks.

“I don’t think he was ever taught how to play. … I’ve got him a few toys and a few bones, and I think it took him about a week before he even touched a bone. Now, he’s getting into playing,” he said.

Half of dog intakes are strays, half are brought in by the owner. Nawaz said the adoption rate is surpassing the intake rate as RHSPCA has recorded a 25% increase this year compared to 2019, which had a 70% increase over 2018.

While seeing animals going off to a new forever home rather than staying in cages or being sent to puppy mills is cause for celebration, Nawaz said puppies and small dogs, classified as under 25 pounds, are all the rage and quick to be fitted with a new home despite majority of intakes being older and larger breeds. Last year, a total of 880 dogs were taken in by the RHSPCA and 150 of those were puppies and small dogs, according to Nawaz.

McNelis said he already feels a strong bond between himself and Tormund and knowing he is providing a better life for his new best friend is incredibly rewarding.

“Trying to help out some dogs that were left behind or abandoned or came from some other ... like a bad home. Whatever negative circumstance they were living in and being able to help give that dog a better life is a nice feeling,” McNelis said.

Nicholson said the advantages of adopting older pets include being formerly trained and sometimes familiar with tricks and commands as well as having fully blossomed personalities, which lends to better matches.

Beyond the societal advantages of reducing the number of strays and neglected animals, Nicholson said adopting animals provides physical and emotional advantages to the person who brings a new pet into their life.

“Adopting a pet is great for your health. Studies have shown that it lowers stress and increases physical activity, which can lead to things that decrease blood pressure and decrease cholesterol,” she said. “During the pandemic, it’s a great time to adopt a pet because you have a constant companion where social isolation can be quite a bit lonely, and a pet can help with that.”

Adopting an animal does come with a bag full of responsibilities, both financial and time-draining. McNelis warns those looking to bring a pet addition into their home to fully weigh whether they have the ability to pay for the animal’s continued care and cut out hours of their schedule to walk and play with a dog.

Many communities online and in-person revolve around supporting new pet owners. Because silly snouts and playful paws can spread cheers to many, on May 30, RHSPCA alumni owners are invited to take part in a dog walk parade around Bellaire at Stone Port neighborhoods to spread joy to residents. Interested parade-goers should contact RHSPCA via Facebook or email at info@rhspca.org.

“We still have to euthanize so many, so many animals each year and when it comes to our facilities here with dogs, we’re saving over 90% of dogs that come into our care, but the adoptability of not all these dogs is equal, and that’s to say in the public’s eye,” Nawaz said. “Rescue is terribly important but especially for those guys that have a higher need: those being adults, larger breed dogs and seniors.”