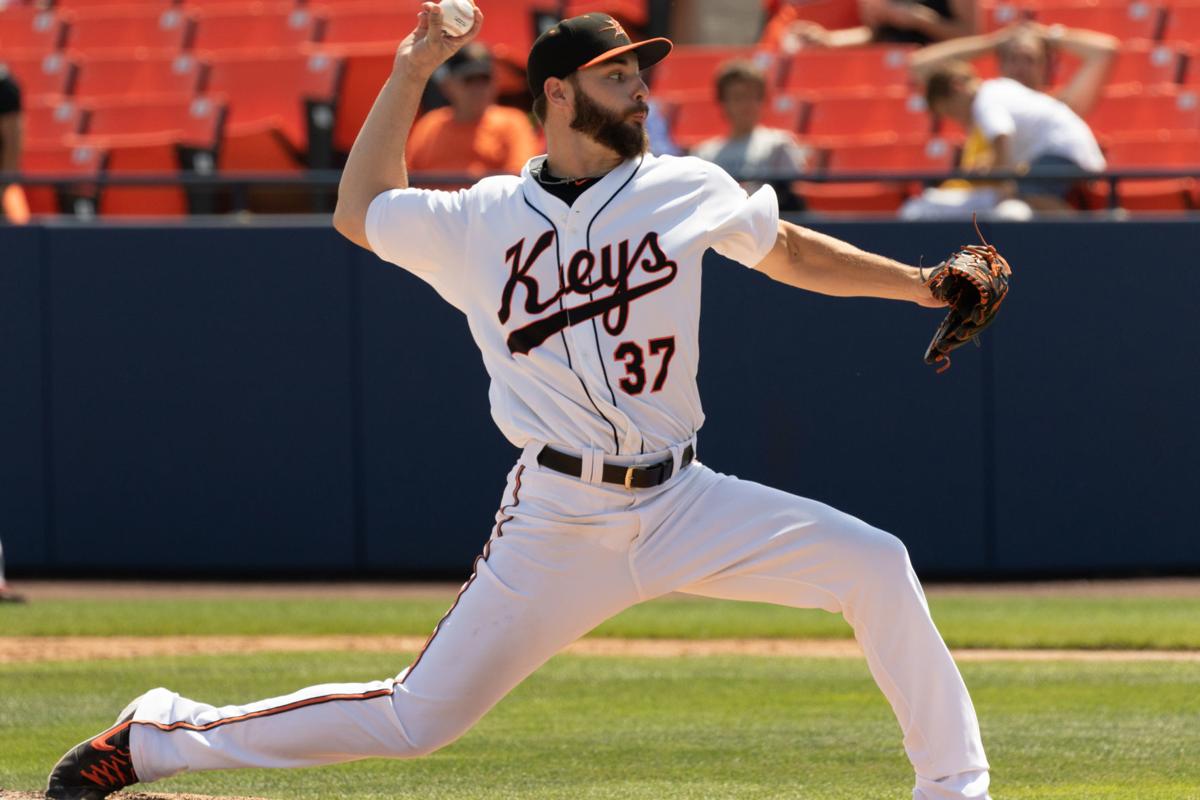 Brenan Hanifee delivers a pitch during a game last season with the Frederick Keys. 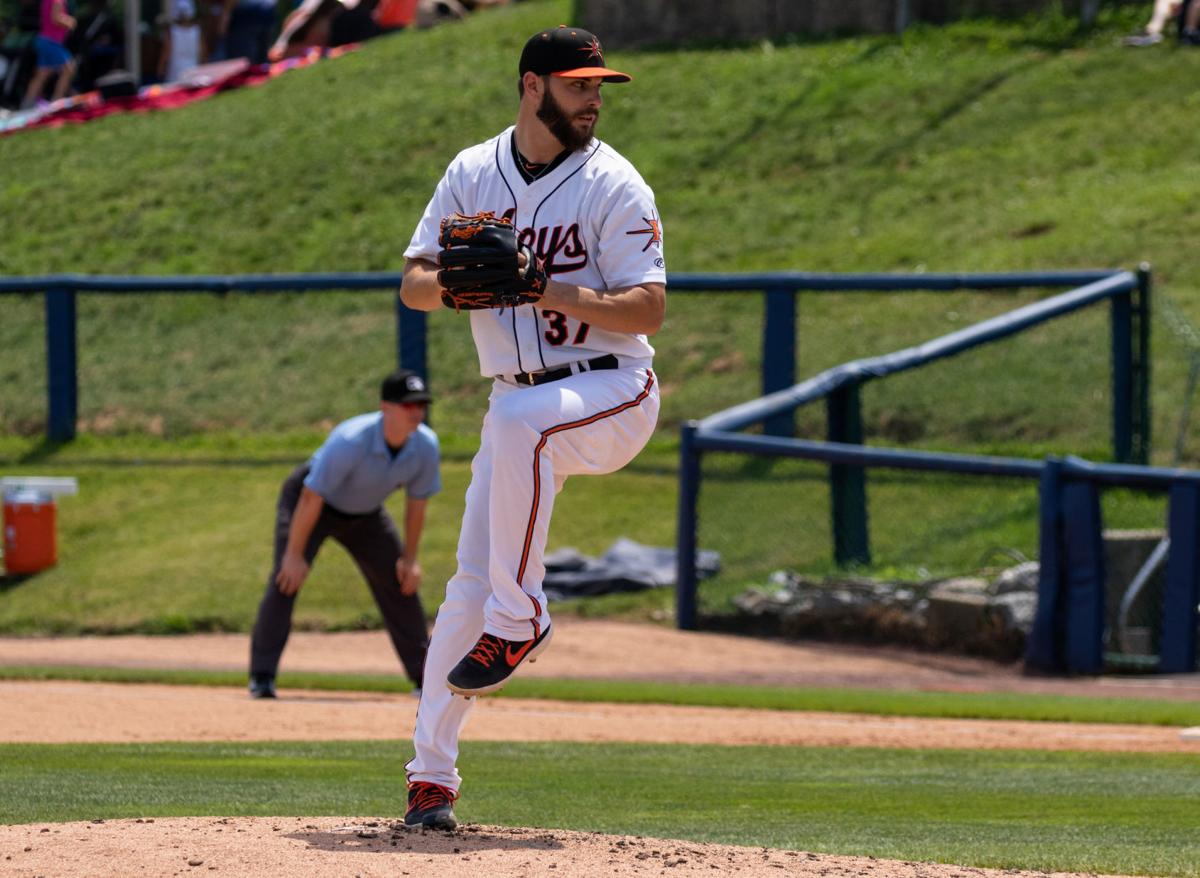 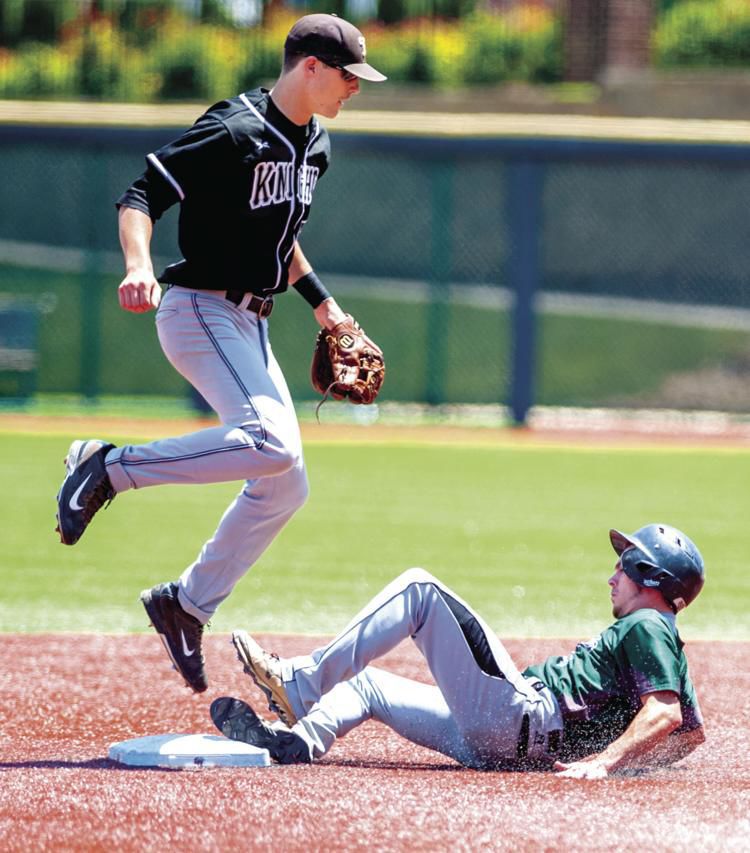 William Monroe's Toby Collier slides into second base as Turner Ashby's Brenan Hanifee hops to avoid being tripped during a game in 2016.

Brenan Hanifee delivers a pitch during a game last season with the Frederick Keys.

William Monroe's Toby Collier slides into second base as Turner Ashby's Brenan Hanifee hops to avoid being tripped during a game in 2016.

RAWLEY SPRINGS — It was a unique, but rewarding, experience for Brenan Hanifee.

During his first season with the Frederick Keys — the Class A-Advanced affiliate of the Baltimore Orioles — the 2016 Turner Ashby graduate experienced both highs and lows.

The Keys play their home games at Harry Grove Stadium in Frederick, Maryland — a drive of just a bit over two hours from Hanifee’s lifelong residence of Rawley Springs. That classified as a high.

“It’s been awesome, man,” Hanifee said. “Seeing so many familiar faces, whether it was in Frederick, whether it was in Salem, Lynchburg, wherever it may have been, it was very rare that I pitched and couldn’t look up in the stands and see somebody I know.”

Add in the moment he was named Frederick’s opening day starter at home against the Winston-Salem Dash on April 4th and a complete-game shutout against Salem on July 14th and it’d be easy to think it was another successful year for the right-handed pitcher. That's when the lows come into play.

It wasn’t all smooth sailing for Hanifee, who was drafted in the fourth round of the Major League Baseball Draft in 2016 by the Orioles — his favorite team since he was a child.

“I didn’t feel like I commanded the ball quite like I had the first couple of years,” Hanifee said. "Stuff gets exposed as you go to higher levels. The lack of off-speed stuff kind of got exposed last year. I was a little fastball heavy my first couple of years. I’m trying to get those percentages larger on the off-speed stuff and just trying to mix it up a little more.”

Hanifee was brilliant during his career at TA and made the quick decision to sign with the O’s after graduation instead of attending East Carolina on a baseball scholarship.

A back injury prevented Hanifee from making his professional debut that season. In 2017, however, he didn’t miss a beat as he returned to the mound with the short-season Single-A Aberdeen Ironbirds. That season, he finished 7-3 in 12 appearances, all starts, with a 2.75 ERA and 44 strikeouts in 68 ⅔ innings. As a result of his strong debut, he was named a New York-Penn League All-Star Game selection.

“Outstanding. That’s the only way you can put it,” Aberdeen manager Kevin Bradshaw told the Daily News-Record in 2017 of Hanifee’s season. “He has met all of our expectations and even exceeded some. I think he’s right on track with his development.”

Hanifee continued to impress in 2018 as he went to the Delmarva Shorebirds — Baltimore’s low Class A affiliate — and went 8-6 in 23 starts with a 2.86 ERA and a 1.076 WHIP. After back-to-back successful seasons, Hanifee started 2019 in Frederick.

“I started coaching Brenan when he was a junior,” said TA baseball coach Andrew Armstrong, who pitched at Ohio State and was drafted by the Atlanta Braves in the 50th round of the MLB Draft in 2007. “He was really a leader of the program from day one that I got there. He always had the demeanor of someone who will be successful.”

With the Keys, however, consistency was an issue for Hanifee as he continued to rely on what got him to the minors — a polished approach for a young player that was centered around a low-90s mph sinker. He admitted he needed to make a change after he finished 2019 with a 9-10 record and his ERA and WHIP spiked to 4.60 and 1.419, respectively.

“He came into the offseason very motivated, which is his norm, to improve,” said Mike Martin, owner of Next Level Athletic Development of Harrisonburg. “The difference this year and some other years is it was more specific in nature to what he wanted to improve and what he felt like he needed to improve. It was spent working on him making changes to his delivery that he wanted to make, as well as working to improve his slider and change-up.”

One attempt Hanifee took at becoming a more complete pitcher was a trip to Kent, Washington to the Driveline Baseball Academy, which is considered the world’s best data-driven baseball player development program for both hitting and pitching.

While there, he said researchers were able to use several high-speed cameras in combination with a high-tech motion capture system to get data that provides both true range of motion measurements as well as speeds of rotation during his pitch delivery.

From that point, Hanifee said the researchers took the data and run it through the database of all the pitchers they’ve seen that throw over 90 mph. From there, they were able to provide him a few specific movement characteristics he could improve in his delivery.

“That was an awesome experience,” the 6-foot-5, 215-pounder said. “From a baseball standpoint, it’s arguably the best facility in the U.S. They hooked me up to some motion capture, some pretty high-tech stuff. You have about 50 sensors on you and it tracks your every move and tells you what you need to work on, where the range of motions are, arm action. I tried to clean that up a little bit this offseason and I think it worked.”

Hanifee is currently ranked by MLB.com as the Orioles’ 18th-best prospect. He moved up to as high as No. 10 early on his career but said he feels this offseason will push him back up to where he belongs.

“I’m excited to see how the year unfolds for him,” Martin said. “He was able to get to the point he is now without much more than his knowledge of pitching, his raw ability and a very good two-seam sinker. Those aspects have only continued to improve, but he has added two more pitches to his slider and change-up. He is going to turn a lot of heads.”

Hanifee said that he also switched up his diet a bit during the offseason, focusing more on cooking as he learned the importance of healthy meals and nutrition consistently.

Combine that with his specific work in improving his arsenal as a pitcher and the former Knights standout said it’s provided him the boost needed to get back on track in 2020.

“I think this was the best offseason I’ve had so far,” Hanifee said. “I kind of had a vague plan going in the first couple of years, just targeting general strength and stuff like that. This year, we really sat down and figured out what we wanted to go after it. I had a couple of really good years, my first couple of seasons were really solid. Last year, I had some struggles at times. So I just got on the mound more often and tried to figure some pitch development stuff out while maintaining strength and gaining a little more.”

Entering his fourth season in the O’s minor league system, Hanifee said he’ll head to Sarasota, Florida this weekend — he’ll break it up into a two-day trip — to begin spring training. He said it’s a moment that won’t be nearly as overwhelming as in past years.

“The first couple of years, I took Spring Training a little bit too seriously,” Hanifee said. “It’s individualized. You get a month and a half to get yourself ready. It’s about what you need to do to get yourself ready. I’m kind of learning that as I go. It’s definitely helped to have a couple of years of doing that and to know what I need to do to get ready.”

Hanifee added: "My confidence is pretty high right now. I really feel like I’ve put in the work to go have a successful season. I’m just excited to get down there and start competing again and seeing how my stuff plays. Hopefully, all the hard work pays off.”

As he gets ready for the start of the 2020 season, which will likely be with Frederick on April 9 at the Fayetteville Woodpeckers, he thought back to the highs and lows of 2019.

The setbacks he faced help him learn, he said, but having friends, family and members of Rawley Springs, Bridgewater and the surrounding communities constantly around got him through.

Now, he’ll suit up to chase his dream once again with those same folks around.

“The support has been awesome,” Hanifee said. “I enjoy being back here in the offseason and I’m looking forward to getting going again and making it happen.”