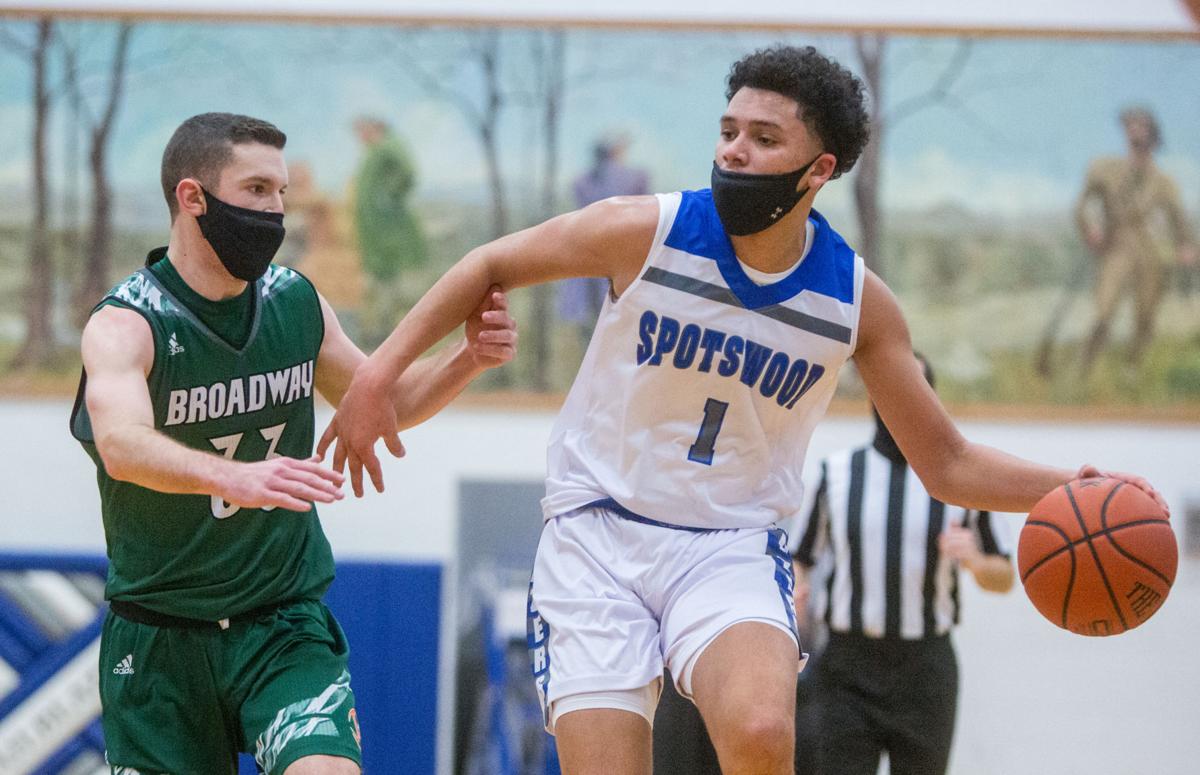 Spotswood’s Carmelo Pacheco sets up a pass under pressure from Broadway’s Collin Rhodes. 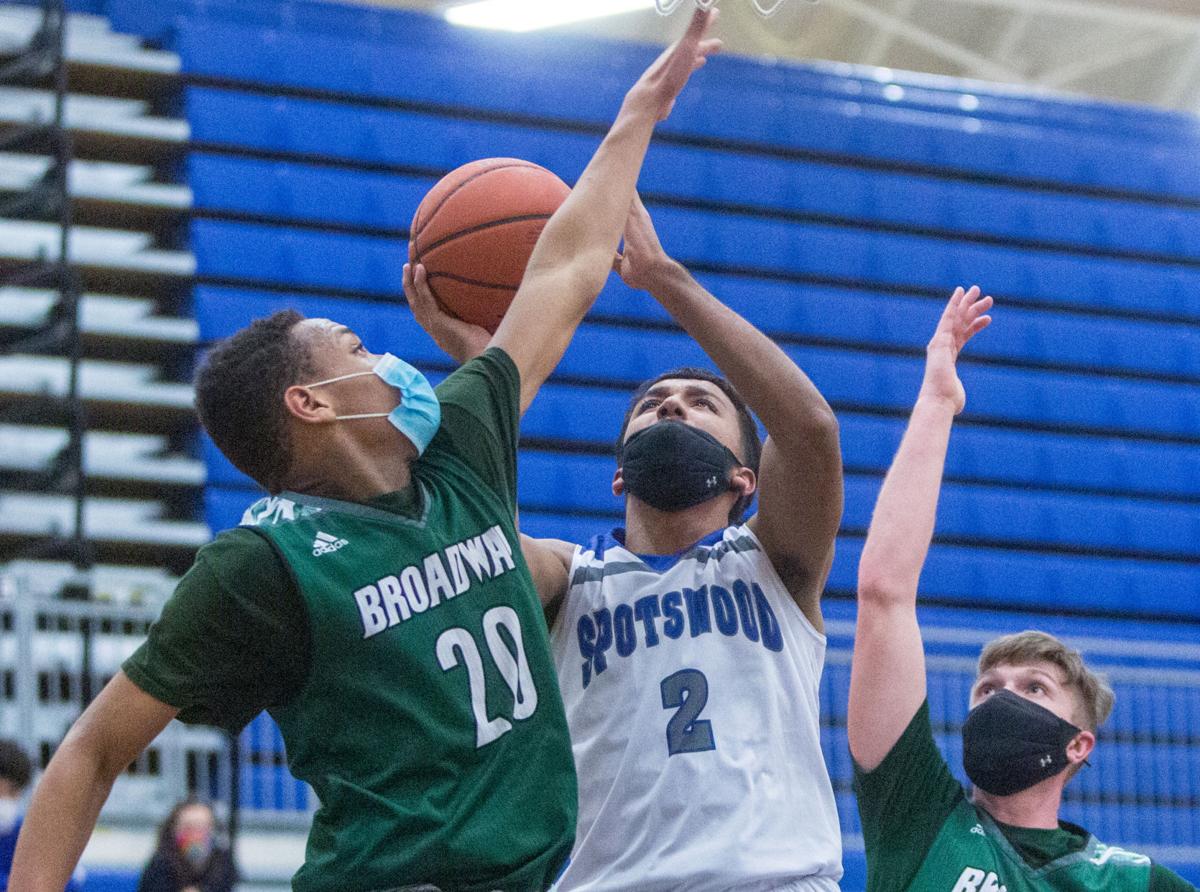 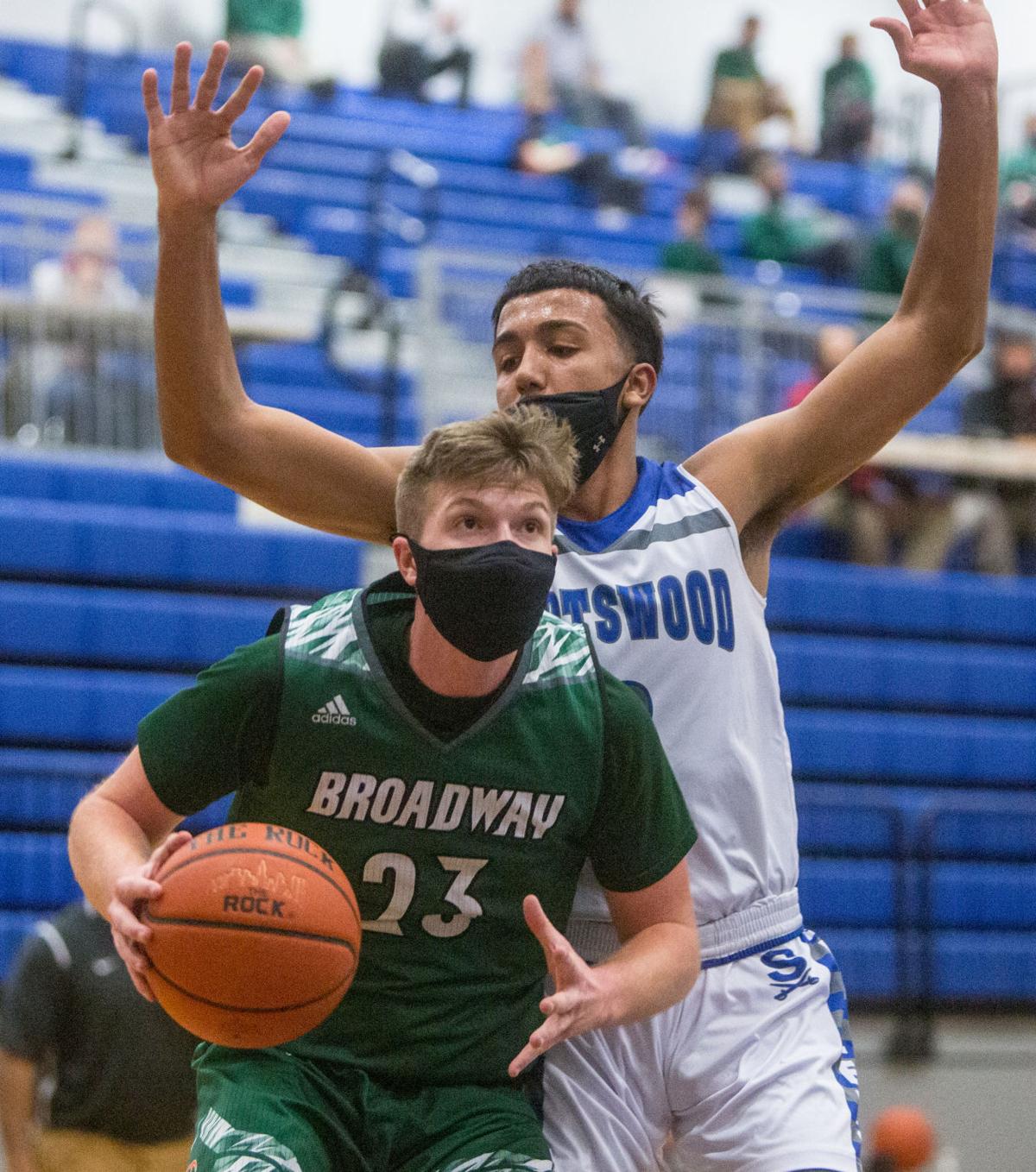 Broadway's Nate Tinnell looks for an opening for a shot under pressure from Spotswood's Jowan Whittaker Ortiz.

Spotswood’s Carmelo Pacheco sets up a pass under pressure from Broadway’s Collin Rhodes.

Broadway's Nate Tinnell looks for an opening for a shot under pressure from Spotswood's Jowan Whittaker Ortiz.

PENN LAIRD — As Carmelo Pacheco returned to the court for his postgame media obligation with freshman Jonathan Harding following just a few steps behind, the junior guard couldn’t help but give his teammate some public affection.

“Shoutout to Mr. Harding with the career-high tonight,” Pacheco said with a laugh. “That’s big time.”

Pacheco, who is one the most prolific scorers in the area and a legitimate Division I prospect, had plenty of reasons to smile after Harding came up in a big way as part of a well-balanced and efficient Spotswood offensive attack in a convincing 47-31 win over Valley District foe Broadway in boys basketball action in Penn Laird on Tuesday.

It was a much-needed win for the Trailblazers, who were coming off a 25-point thumping at the hands of rival East Rockingham last Thursday, and an important performance from the supporting cast around Pacheco this season.

“That’s extremely important and I think [Pacheco] wants other guys to step up,” said Spotswood assistant coach Marcus Davis, who continues to serve as the team’s acting coach while head coach Chad Edwards is away from the team due to undisclosed reasons. “Tonight, it was good to see [Pacheco] have faith in his teammates, give them the ball in situations he had to give up the ball and guys came through. That’s what we’re trying to do.”

In the loss last week to the Eagles, it was a one-man show as Pacheco scored 27 points in a showdown with ERHS 6-foot-8 wing Tyler Nickel. Unfortunately, the rest of the Spotswood roster finished with just 12 points total.

Against the Gobblers, however, every player on the roster got in the game and eight reached the scoring column.

“It’ll be very important because a lot of teams will start keying on me,” said Pacheco, who had 16 points for Spotswood. “We definitely have the pieces around me to make a deep run. The coaches and myself have been encouraging the other guys to step up and score and show the world what they can do. That’s what they did tonight.”

It was a back-and-forth contest early with neither team settling in on offense, but the Trailblazers used a 13-3 run — sparked by six points from Pacheco — to go from a two-point deficit to leading 22-14 going into the half.

“I expect it to be ugly, to a certain degree, but I don’t expect us not to have the effort,” Broadway coach Dwight Walton said. “They packed the paint a little bit on us tonight. We didn’t shoot the ball well and that magnifies things a bit. We are a good shooting team. They can shoot the ball well, but the mental game did not go well for us tonight.”

The closest Broadway got was within six on a bucket from Gage Williford in the third, but Spotswood responded with a 13-2 run that extended across the third and fourth quarters and led by as many as 19 before emptying the bench.

“I know we appreciate the opportunity to play, but we’re not taking advantage of a great opportunity,” said Walton. “These kids went and worked really hard in the offseason. But now that we’re out here ready to play, we’re just going through the motions. … [Spotswood] deserves credit. They build confidence on runs. That is Spotswood and it’s something they’ve always done well. They did it well again tonight. We have a lot of things we can work on.”

Harding, a 6-foot-2 freshman that has received a lot of praise from the Trailblazers coaching staff, finished with a career-best 14 points in the performance, scoring on multiple buckets in transition and playing sound basketball.

“Practicing with the team makes you fit in and, once you get into the system, you’re good to go,” Harding said. “[The loss to East Rock] definitely motivated us. We had to change a few things in our offense. Once we got it, we got it.”

As impressive as Spotswood was on the offensive end with its balance, the defensive performance was vital.

“We told our guys coming into tonight that Broadway is an excellent team,” Davis said. “We knew we were going to have to play excellent defense to even have a chance. Our guys answered the bell and effort was the biggest difference. I thought we really competed on defense and the offense was what it was. We did a good job.”

After the loss to East Rockingham, the Trailblazers were left disappointed and questioning what the season would look like if they didn’t start putting together a better effort on both ends of the court. They saw growth on Tuesday.

“Honestly, more was on us,” Davis said. “We had to do a little soul-searching and I think the guys had to understand that the success of our program has nothing to do with coaches. It has to do with players. We stressed that to our guys. Our effort, our intensity — those different things that we have to get better at — we have to do those because that’s the foundation of Spotswood basketball. I feel like, against East Rock, we didn’t do that. I’m super thrilled with the guys. We had a couple of great days of practice and they checked off those boxes. They played hard.”

That’s why Pacheco couldn’t help but flash a big grin as he prepared to leave the Spotswood gym.

That type of balanced effort is what the Trailblazers need to be successful this season. And they got it Tuesday.