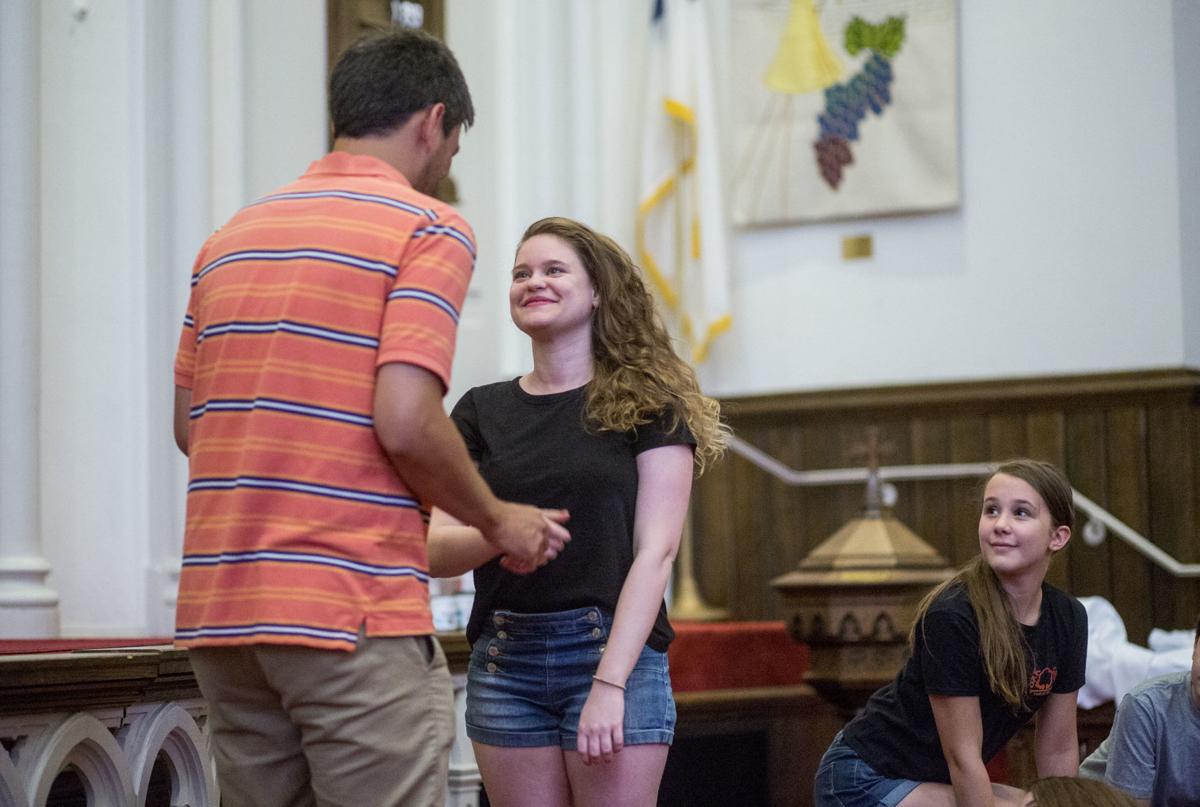 Myles Lawlor, of Harrisonburg, and Samantha Cadieux, a James Madison University theater student from Crozet, play Mr. Darling and Wendy during a rehearsal of Valley Playhouse’s production of “Peter Pan.” 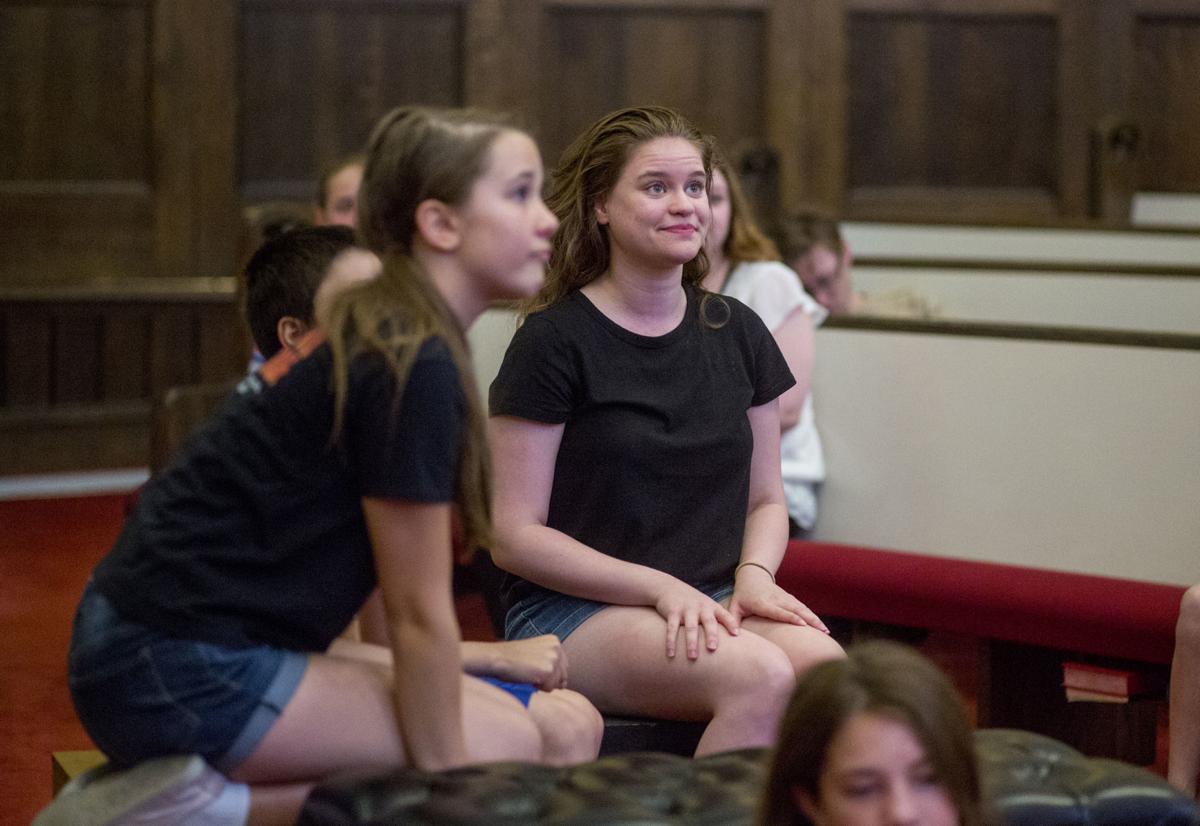 Samantha Cadieux, of Crozet, plays Wendy during a rehearsal of Valley Playhouse’s production of “Peter Pan.” 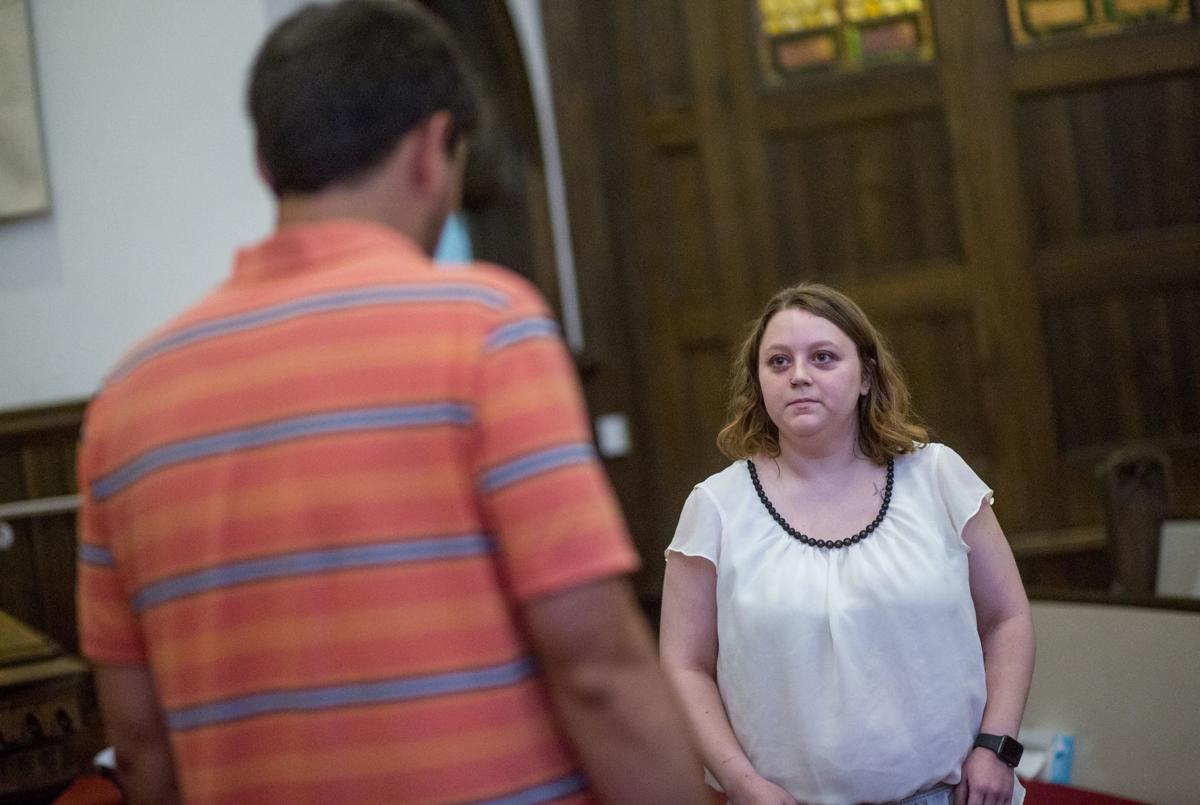 Adria Sirico, right, and Myles Lawlor, both of Harrisonburg, play Mrs. and Mr. Darling during a rehearsal of Valley Playhouse’s production of “Peter Pan.”

Myles Lawlor, of Harrisonburg, and Samantha Cadieux, a James Madison University theater student from Crozet, play Mr. Darling and Wendy during a rehearsal of Valley Playhouse’s production of “Peter Pan.”

Samantha Cadieux, of Crozet, plays Wendy during a rehearsal of Valley Playhouse’s production of “Peter Pan.”

Adria Sirico, right, and Myles Lawlor, both of Harrisonburg, play Mrs. and Mr. Darling during a rehearsal of Valley Playhouse’s production of “Peter Pan.”

HARRISONBURG — The story of Peter Pan, the boy who wouldn’t grow up, is one that has been retold and re-imagined countless times since author J.M. Barrie first created the world of Neverland more than a century ago.

Peter Pan and the Darlings’ adventures have been turned into books, Broadway theater musicals, animated and live action films, a live television performance and numerous other works.

Samantha Cadieux has seen them all.

The story begins when Peter Pan, a young boy who spends his endless childhood in magical Neverland, searches for his shadow in the home of the Darling family in London. Wendy and her brothers, John and Michael, join Peter Pan on an adventure in Neverland with the Lost Boys and Tinker Bell, clashing with Peter’s nemesis Captain Hook and his band of pirates aboard the Jolly Roger.

Cadieux is a theater student at James Madison University. She said the role brings back the nostalgia of childhood, which is what makes it such a timeless tale.

“For kids, it’s this idea that there’s a land with a bunch of kids and pirates and mermaids and there’s all this fun and creativity, and you can just play and fight and have fun all day,” Cadieux said. “I think for adults it brings back ‘This is what I used to do when I was kid’ — getting to pretend and imagine and play.”

The Valley Playhouse production is co-directed by Frank Dellorco and Marissa Plummer, who are both taking their first shot at directing the cast of 20. The two were asked to fill in when the original director for the show dropped out, but both were planning to make their directorial debuts within the next year.

“It has been a challenge for me personally and I love it,” Dellorco said.

While Dellorco has acted in several Valley Playhouse shows, Plummer comes with a background in stage managing, which has created a valuable partnership between the two.

“I think it’s been a pretty good blend of trying to figure that out and make that a cohesive effort,” Plummer, 18, said. “It’s been helpful having the two different viewpoints.”

The duo decided to evade the stereotypical look of Peter Pan popularized by the 1953 Disney animation in an attempt to modernize the show.

“We tried to get away from a lot of the typical tropes that you see in Disney movies or any sort of story retold in animation for kids,” Plummer said. “Peter is not necessarily wearing the green tunic and green cap with a red feather. We still have the element of green … but it’s straying away from the hyperbolic images that people see. It’s toned down slightly but we still want to keep all of the magic for the people that are in it and the kids that are watching.”

Some of the set pieces are borrowed from Second Home, a local day care that has performed the “Peter Pan JR.” musical. Dellorco said an artist was brought in to paint a set of abstract-style trees for the forests of Neverland. They also have set pieces for the pirate ship.

“You’ll know you’re in Neverland when you see it,” he said.

Michael Strawderman, the theater teacher at Thomas Harrison Middle School of 28 years, is making his return to the stage as Captain Hook.

“I’ve directed lots of shows, but this is really my first opportunity to get back on the stage and be in a performing role,” the 51-year-old said.

Strawderman remembers acting out scenes of “Peter Pan” with his son in their living room. He always played Hook while his son would always pretend to be Peter Pan.

“If you had a list of fun characters to play I’m sure Captain Hook would probably be on that top 20 list somewhere,” he said. “It’s always fun to play villains and he’s such an iconic character.”

He said he’s working to play up the character as arrogant and sinister as he can.

“I want to be that character that the audience loves to hate,” Strawderman said. “Obviously, it’s a fun show. Hopefully people will have fun with it and be able to get all the children booing and hissing at Captain Hook because he is truly the iconic villain.”