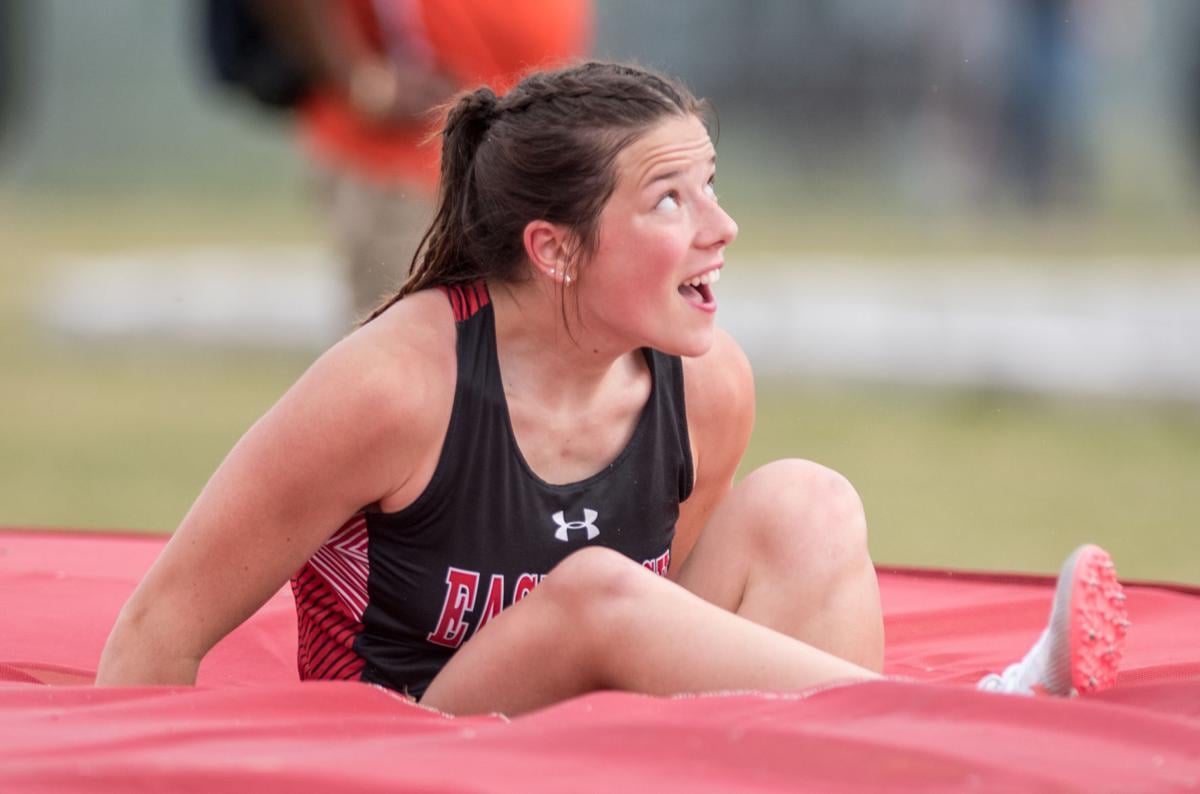 East Rockingham's Margo Fox reacts after a successful pole vault during the Region 2B Championships. 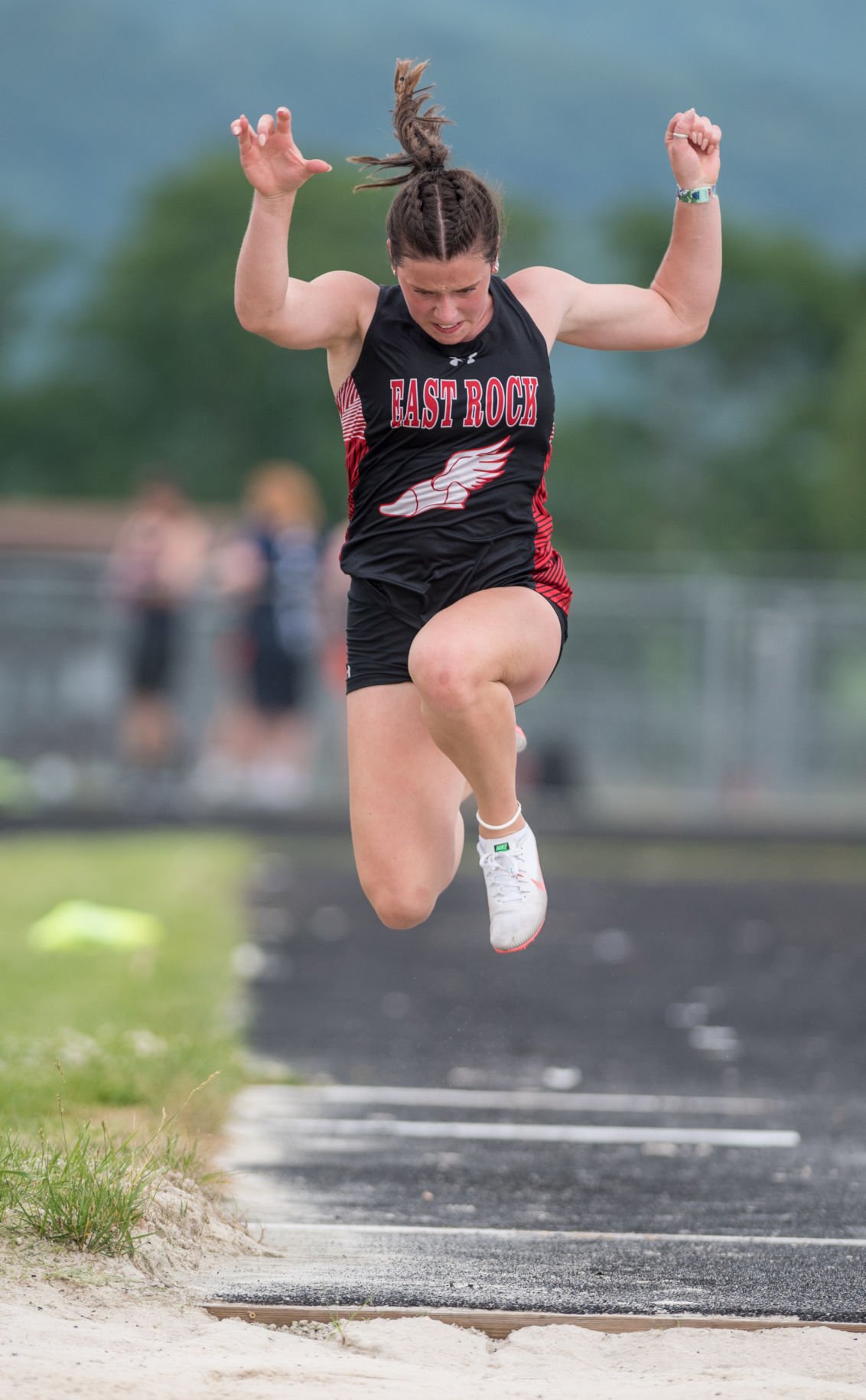 East Rockingham's Margo Fox takes flight in the long jump during the Region 2B Championships. 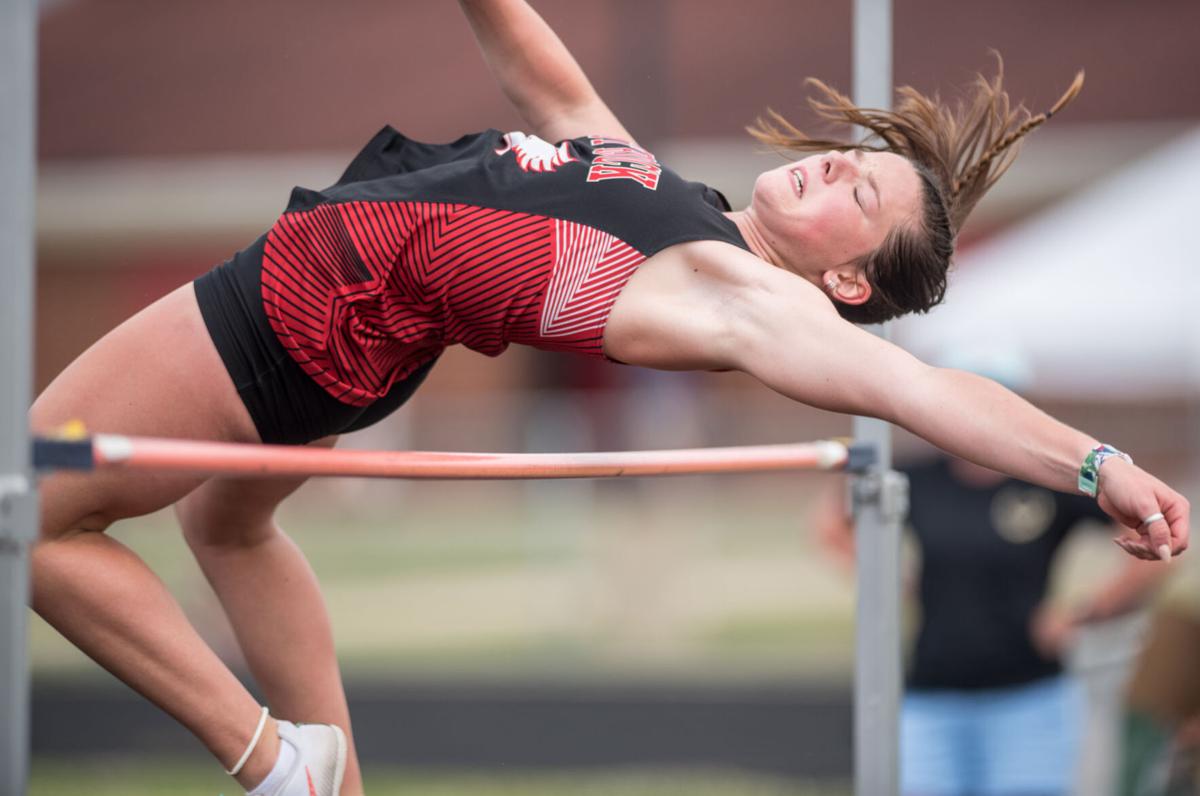 East Rockingham’s Margo Fox clears the bar in the high jump during the Region 2B Championships.

East Rockingham's Margo Fox reacts after a successful pole vault during the Region 2B Championships.

East Rockingham's Margo Fox takes flight in the long jump during the Region 2B Championships.

East Rockingham’s Margo Fox clears the bar in the high jump during the Region 2B Championships.

Despite being listed in only two running events for the evening, Margo Fox stayed busy sprinting.

The East Rockingham junior spent much of Wednesday afternoon in a dash across the school’s football field from the high jump area over to the opposite end where long jump, pole vault and other field events were taking place.

Simply put: The Elkton Swiss Army Knife, much like she has done all season, was doing it all.

“That’s been the key, I think — her willingness to get out of her comfort zone and try new events,” Eagles coach Zach Mathias said. “Whether it’s the pole vault, the shot put or, most recently, the 400, she’s embraced that role as our do-it-all athlete. Pair that with her competitive nature and no matter which event she’s in, she is going to give it everything she’s got — physically and mentally.”

It was the versatile Fox shining, once again, for the East Rockingham girls at the Region 2B outdoor track and field championships at ERHS on Wednesday afternoon.

Fox won the high jump while finishing second in the pole vault and long jump and fifth in the shot put and 200. She also ran in the 4x400 relay.

At last week’s Bull Run District meet in Strasburg, Fox won the high jump, long jump and pole vault, was second in the 200 and third in the shot put. For her efforts at the district competition, she was name Female Athlete of the Meet.

“It was an honor,” Fox said. “It felt amazing to see my hard work paying off.”

There’s never been much doubt that Fox is one of the better athletes in the halls of ERHS after she finished as runner-up in the Virginia High School League Class 2 diving competition in January and was a key member of the volleyball team.

Even as a freshman in 2019 she used her natural ability to fill in at various times during the regular season on the powerful state champion 4x100 relay team and also was competitive throughout the year in the high jump.

But after missing out on her sophomore campaign when it was cancelled due to COVID-19, East Rock coaches said they weren’t sure what type of leap she’d make.

“I told her, if she wants to be, she has the potential to be successful in every event she does,” Mathias said. “And that’s when the light bulb came on. From that day forward, she’s been willing to do everything the coaches ask of her.”

While some may have taken Mathias’ words to Fox as simple encouragement, she has taken it as a challenge and is now fitting the mold of a typical Eagles female athlete.

In past years, athletes such as Koschinya Jefferson, Katie Crider, Makayla Jones and Kayla Marshall have excelled as multi-event athletes at East Rockingham.

This year, Fox has taken on that role for ERHS with six events on her resume thus far.

“We’ve been blessed with more than our fair share of versatile athletes,” Mathias said. “Kids like that can really help a smaller roster compete when it comes to overall team points. If one athlete comes into a meet and scores 30-40 points by themselves, it can really shake up the team standings at the end of a meet. To have her step into that role without hesitation has been a blessing to the team.”

Fox credited her work in track for the improvement she displayed while taking on an increased role with the young Eagles volleyball team this past season.

Fox’s older sister, Sage, is a 2020 graduate of ERHS and was a standout on the volleyball court, where she was named the Bull Run District and Region 2B Player of the Year as a senior.

“My jump training for track has not only helped for this current season, but will be helpful for the upcoming volleyball as well,” Fox said. “Training has been beneficial for my blocking, hitting and overall movement on the court.”

The Staunton girls won the team title Wednesday with 87 points with Strasburg (71), Clarke County (69) and East Rockingham (62) following behind.

For Fox, she said she’s simply enjoyed being back on the track this season.

“I want to perform at my best and just make some memories,” Fox said.

According to her coach, the junior has displayed just how talented she is.

“Like I told her on the first day of practice, Margo has the potential to be successful at anything she wants to do,” Mathias said. “She brings a great attitude to the track and she’s willing to put in the work. She’s never satisfied. She always wants to improve. So if the sky is her limit, she will shoot for the moon. As a coach, that makes me very excited to see what her future holds.”

The Virginia High School League Class 2 outdoor track and field championships are scheduled to be held close to home on June 19 at James Madison University.

If history is any indication, Fox will likely stay busy between events again.

And according to the East Rockingham junior, that’s just fine with her.

“I enjoy being able to compete in so many different events,” Fox said “I love the thrill.”