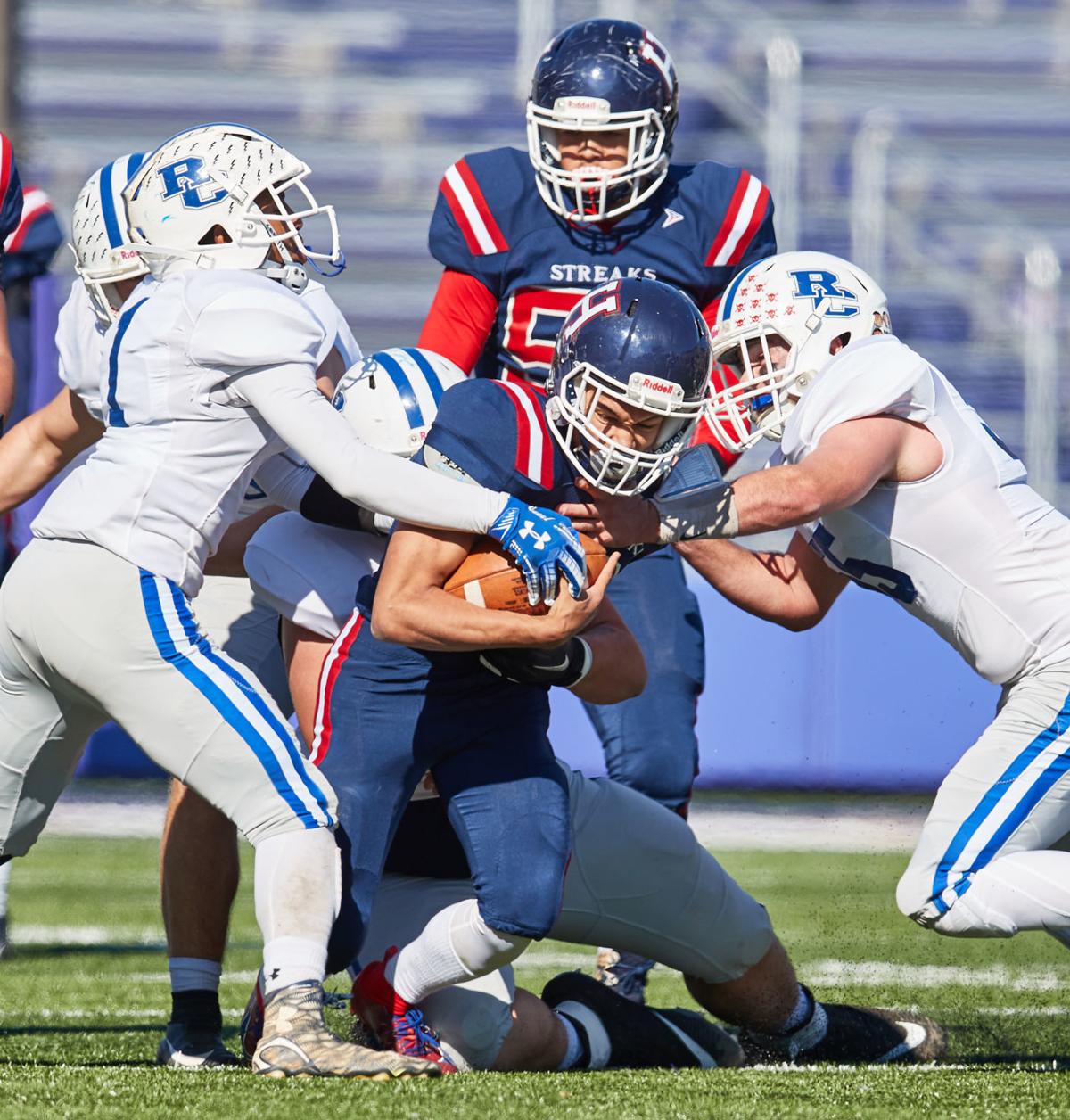 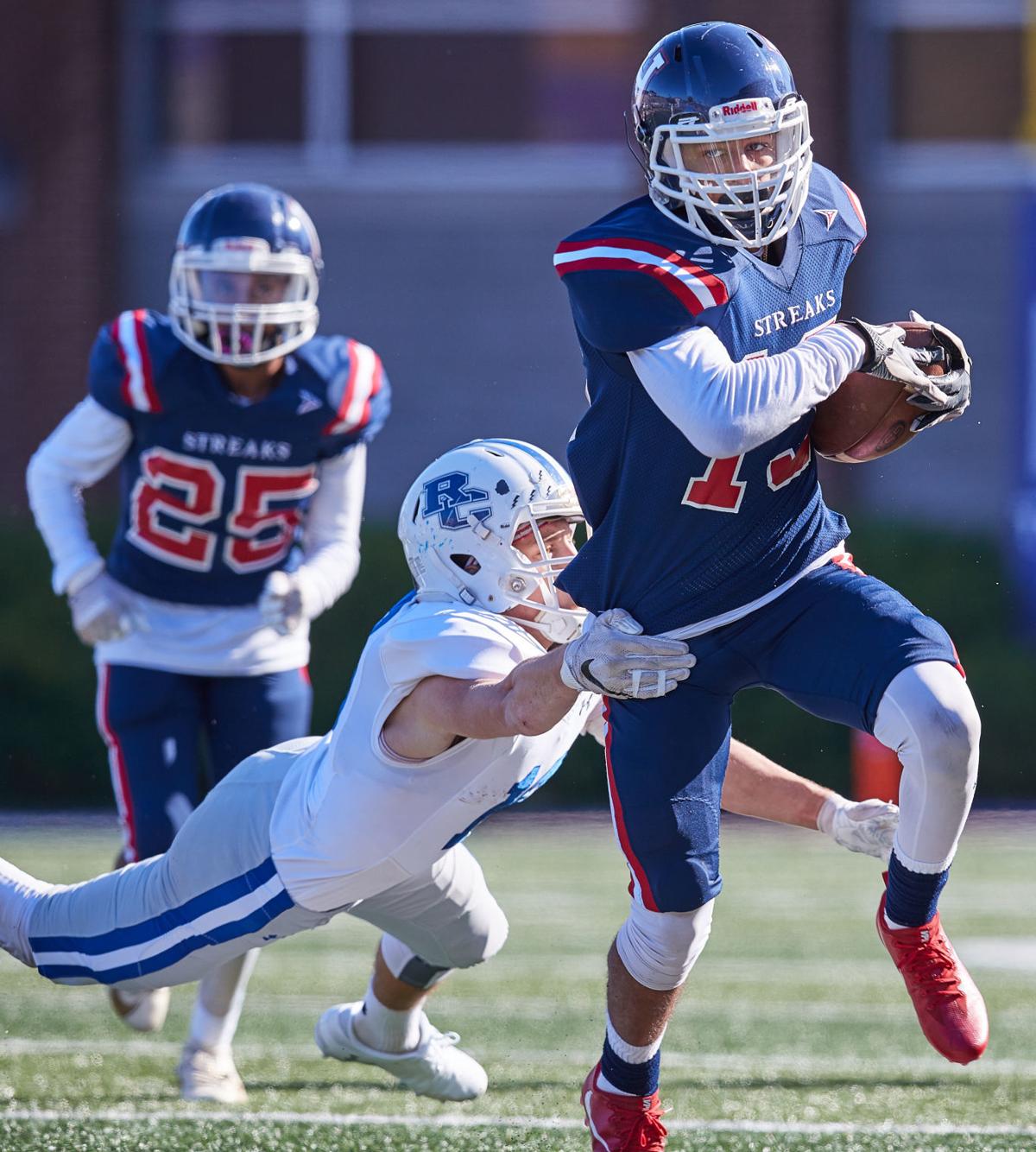 Standing along the away sideline of Zane Showker Field inside of James Madison’s Bridgeforth Stadium, Rockbridge County coach Mark Poston let out a deep sigh.

“They always seem to be good games,” Poston said. “They never make it easy.”

While the Wildcats certainly didn’t make it easy for themselves with some late-game mistakes, but they made it even tougher on Harrisonburg as they held on for a thrilling 34-29 Valley District win in the second game of the Shenandoah Valley Football Classic on Saturday.

The victory gives Rockbridge and Harrisonburg an even district record at 3-1, meaning the Blue Streaks will need a win over unbeaten Spotswood next week to force a three-way tie for the league title.

From the start of Saturday’s contest, the momentum was in favor of the Wildcats.

Bret McClung put Rockbridge on the board first with a 1-yard run that capped off 10-play, 64-yard drive and then caught a 46-yard touchdown toss from Miller Jay with 8:07 remaining in the second quarter to give the Wildcats a 13-0 lead.

“They just whipped us,” Thurman said. “We came out flat in the first half, didn’t play very well. We tried to run the ball and just couldn’t. All the credit to them. They beat us.”

Momentum shifted a bit when the Streaks got their first points off a safety and Keenan Glago hit Malachi Davis for a 14-yard score to make it 13-8 with 4:58 left in the second.

But as quickly as Harrisonburg gained it, it quickly gave it away with Rockbridge marching 80 yards on 11 plays to make it a 20-8 Wildcats lead at the half.

Poston said he was proud of the way his offense put together long drives against a Streaks defense that has been improved this season.

“Harrisonburg’s special teams are so good, “Poston said. “Throughout the whole game, we played from the 30 in. That was a challenge with the athletes that they have.”

After Gage Shafer scored on a 2-yard run to cap off a 12-play, 71-yard drive and put Rockbridge up 27-8, chaos began to ensue in the second half from both squads.

It started with HHS linebacker Jose Ayala-Castro intercepting a pass and racing 75 yards down the left sideline for a touchdown to cut the deficit to 27-15 and Glago followed that up with a 32-yard scoring toss to Davis to make it a 27-22 game.

Rockbridge again responded with a 29-yard touchdown pass from Jay to Jailik Lynch in the fourth, but Harrisonburg simply wouldn’t go down without a fight in the final minutes.

“You’ve just got to find a way to get off the mat,” Poston said.

Tyrell Foster scored from 1 yard out for Harrisonburg to cut the deficit to 34-29 with 1:52 remaining and Shafer fumbled the first handoff on the ensuing series away to the Streaks.

But on the second play after getting possession back, Glago was hit as he threw and Rockbridge’s Isaiah Poindexter intercepted it with 1:45 remaining to secure the victory.

“He got hit as he threw it,” Thurman said. “It wasn’t just that play, though. We got whipped most of the game. We’ve got to get ready. That’s all you can do.”

Harrisonburg simply never could get consistent production in the run game, which was a stark contrast to what it has been doing during its unbeaten start in district play.

“Absolutely,” Thurman said when asked if the RCHS offensive line wore HHS down. “Well, I don’t know. They started out whipping us. I don’t know if they wore us down. I think they whipped us from the beginning. We’ve got to go home and try to figure something out.”

For the pass-heavy Wildcats, Jay was 15-of-23 passing for 248 yards and two scores, but Shafer was even more impressive with 23 carries for 138 yards and two touchdowns

“I didn’t want to get hurt,” Shafer said. “I just kept running as hard as I could. My offensive line was great. They were paving me some pretty big holes. I couldn’t ask for anything better. This win boosts our confidence a whole lot.”

Confidence is something Poston and Shafer admitted the Wildcats needed.

After a humbling 55-10 loss to Spotswood in its district opener, Rockbridge has now won three straight games and is on a path to host a first-round playoff game.

That’s why after Saturday’s win, Poston couldn’t help but sigh and smile.

“I’m so proud of the competitive aspect from our kids,” Poston said. “We built that Spotswood game up so much and we didn’t perform against Spotswood like we wanted to. A lot of it is to Spotswood’s credit. They’re a very good football team, but we helped them out and we came to play tonight. We had guys play hurt and just did the best they could. I’m so proud of them. It’s a really great job.”