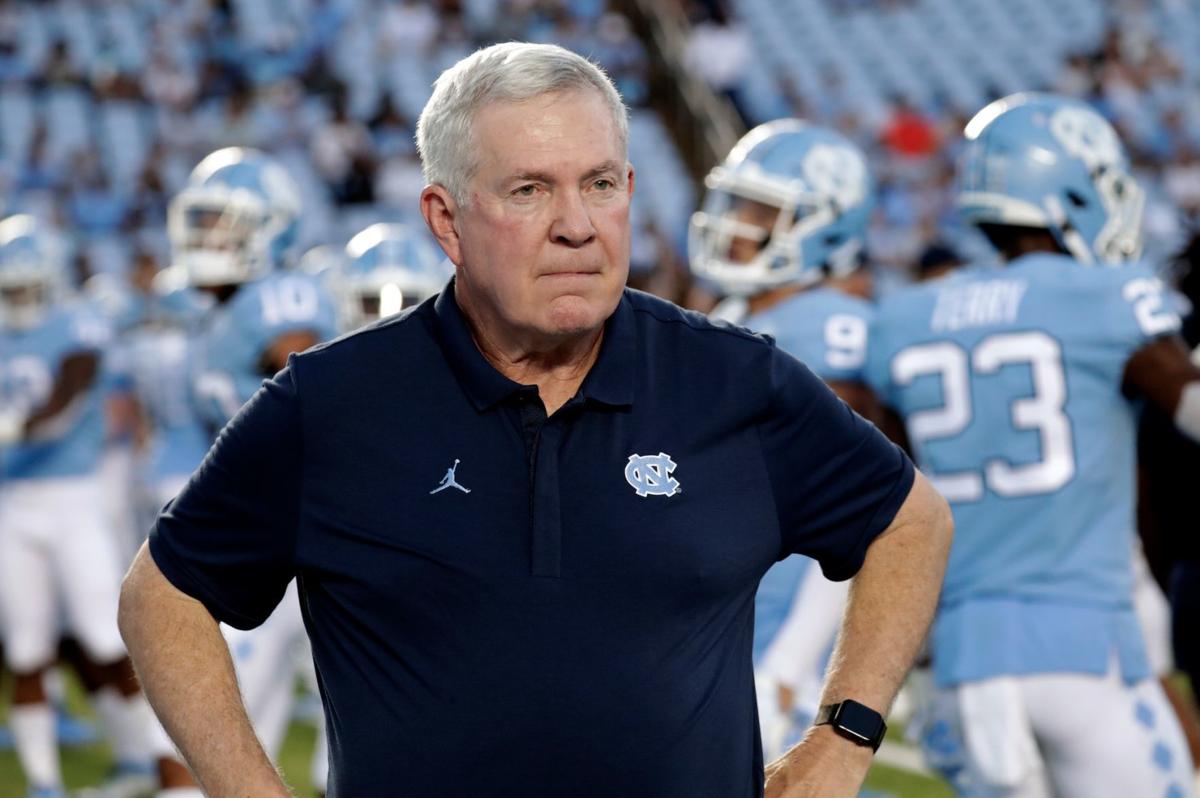 North Carolina coach Mack Brown watches his team warm up prior to a game against Miami last September in Chapel Hill, N.C. 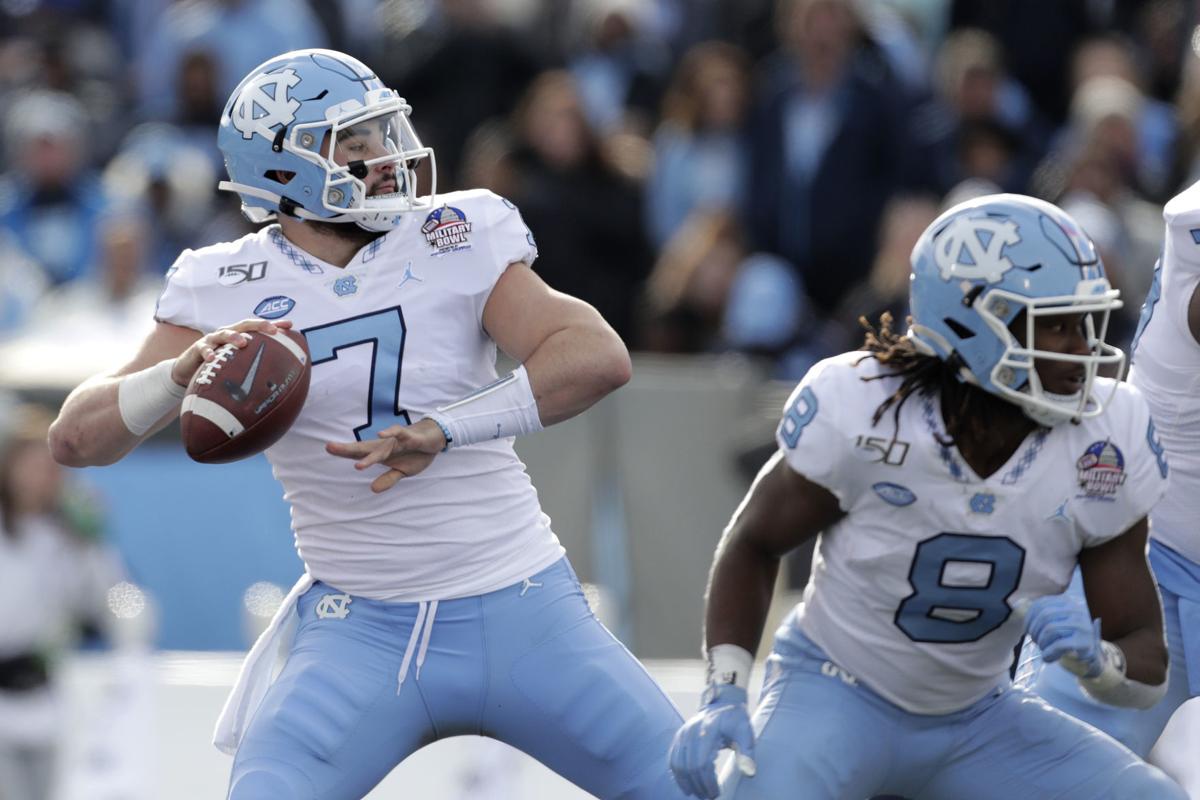 North Carolina quarterback Sam Howell (7) throws a touchdown pass during the Tar Heels' win over Temple in the Military Bowl this past December in Annapolis, Md. 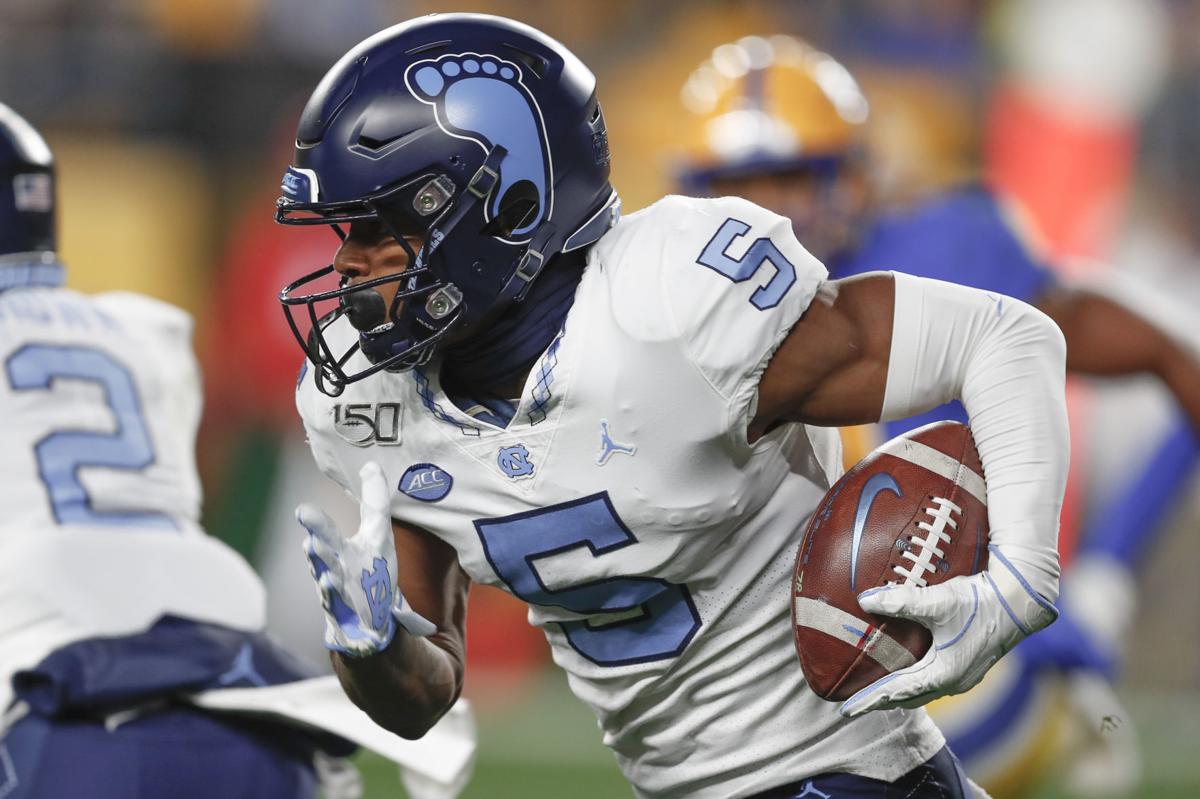 North Carolina wide receiver Dazz Newsome (5) runs after a catch during a game last season against Pittsburgh at Heinz Field in Pittsburgh.

North Carolina coach Mack Brown watches his team warm up prior to a game against Miami last September in Chapel Hill, N.C.

North Carolina quarterback Sam Howell (7) throws a touchdown pass during the Tar Heels' win over Temple in the Military Bowl this past December in Annapolis, Md.

North Carolina wide receiver Dazz Newsome (5) runs after a catch during a game last season against Pittsburgh at Heinz Field in Pittsburgh.

There’s a story Mack Brown can share with his North Carolina players if they start looking ahead.

The Tar Heels have can’t-miss non-conference matchups at Central Florida and against Auburn in Atlanta to start the 2020 campaign. Those three all appear regularly in preseason magazine Top 25 rankings. But squeezed between UNC’s date with the Tigers and the start of Atlantic Coast Conference action, the Tar Heels have a home date with FCS James Madison at Kenan Memorial Stadium on Sept. 19.

UNC finished 7-6, tied for third in the ACC Coastal Division and topped Temple, 55-13, in the Military Bowl last year, its first under Brown in his return to the school. He was previously the head coach there from 1988 through 1997 ahead of taking the same job with Texas where he had a 16-year stay and won a BCS national championship.

“I go back to the highs and lows of coaching,” Brown said.

Though he hadn’t thought about it in a while, Brown said from his first ever stint as a head coach in 1983 at Appalachian State he remembers having to prepare for and play an early-season contest against the then little-known Dukes. Appalachian State had already won on the road at Wake Forest to open the year and then returned home to host JMU, which hadn’t played a game yet.

“We come back and Boone is packed,” Brown recalled. “We get home late that night with the bus and everyone is fired up, so the next week is Mack Brown Day in Boone, North Carolina.

“JMU is coming in and no one knew much about ‘em, but we start looking and then there’s this great defensive end named Charles Haley that sacked everybody on our team. And then we were punting and kicking off to this little guy named Gary Clark. No one could touch him and we ended up losing [24-20].”

It was the first loss of Brown’s head-coaching career.

The veteran of the profession has kept an eye on the Dukes since. Brown said former JMU coach Mickey Matthews is a close friend, and another ex-Madison coach, Everett Withers, played for Brown at Appalachian State and worked for Brown at Texas.

“JMU has become that program that is as good as anyone in the country when you start looking at FCS football,” Brown said. “You look at North Dakota State and you look at JMU. And that’s about it. And it’s not a good one to play, and I told that to the people when I got here. I said, ‘You guys picked the best FCS program in the country to play against,’ so we know we’ll have our hands full.”

The good news for Brown and the Tar Heels entering 2020 is that they return 10 starters on offense and another seven on defense.

With its wide-open Air Raid offense, UNC averaged 33.1 points per game and 474 total yards per game last year. Both numbers were second best in the ACC only to Clemson and Brown said he believes the unit should only build on what it did in its first year executing offensive coordinator Phil Longo’s system.

Sophomore quarterback Sam Howell was last year’s ACC Rookie of the Year. In his first college season, he completed 61 percent of his throws for 3,641 yards and 38 touchdowns compared to only seven interceptions.

“During my five years out [of coaching] and in TV I kept looking for eventually what I would run,” Brown explained. “And then it was what would fit North Carolina the best. … But I coached against Mike Leach and Kliff Kingsbury at Texas and they were running this offense. And I always thought if you could take their passing game with the way they spread the field, and run the ball as well, then it’d be unstoppable.”

Brown said he thought Longo, who formerly held the same role at Ole Miss and before that at Sam Houston State, got as much out of the UNC offense as he could last season. Longo was a recommendation from Kingsbury and Oklahoma coach Lincoln Riley to Brown, he said.

In addition to all the yards and touchdowns Howell accumulated, he was also 10th best in the country for passing efficiency and North Carolina’s offense was eighth best in FBS for turnovers lost (only 12 giveaways in all of 2019).

“And these guys are so close,” Brown said of Howell, Newsome, Dyami Brown and the rest of receivers. “And a lot of them are from either the southern part of Virginia, Virginia Beach or here in North Carolina, so they’ve been able to work together during the pandemic whereas a lot of other teams that had kids scattered all over the country probably couldn’t.

“Sam is a worker and works as hard as anyone on the team. He’s a great student, tremendous leader, has got strong faith and the guys really believe in him. I really think – because he had the sore ankle, the sore shoulder some last year – he’ll be better this year than he was last year because he’ll have some experience behind him and he’ll be able to run more.”

Like Howell is the focal point of the offense, senior middle linebacker Chazz Surratt anchors the defense. Surratt, a quarterback earlier in his career, moved to defense last year and thrived. He racked up 115 tackles to lead the team, 15 tackles for loss and 6.5 sacks to earn first-team All-ACC honors.

“He’s fast. He’s big. He’s strong. He’s smart,” Brown said. “He tries and he felt like his experience at quarterback really helped him on defense to read offensive plays and anticipate what was going to happen. And then after the South Carolina game, he got some confidence and became one of the better linebackers in the country. And it’s been an amazing story.”

Elsewhere on defense, according to Brown, the secondary should benefit from depth it didn’t have last fall.

Transfer defensive backs Bryce Watts (Virginia Tech) and Kyler McMichael (Clemson) are eligible to play, and sophomore defensive back Cam’Ron Kelly, who suffered a knee injury five games into the 2019 season, is expected to be healthy as is senior cornerback Patrice Rene, who was injured in the second contest of last year. Returning starters are sophomore cornerback Storm Duck and senior safety D.J. Ford.

“I’m Mr. Positive when it comes to goals and expectations for a team,” he said. “We always say we want to win the opener because a lot of times openers are lost, they’re not won. We want to beat every team we play from the state of North Carolina because that changes recruiting and your fans have to live with your rivals, so you don’t want to lose to them. Then we want to win the Coastal, the ACC and if you do that now, with Clemson in it and with the way Clemson has dominated it the last few years, that puts you in the playoffs and if you’re in the playoffs you want to win the national championship.”