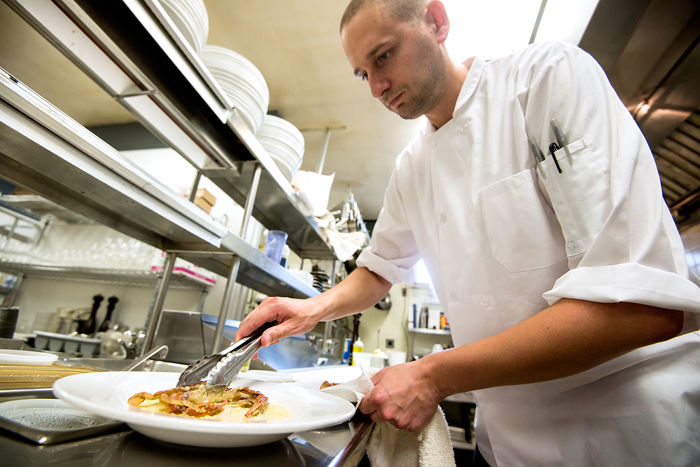 Tom French is the executive chef of the Joshua Wilton House. 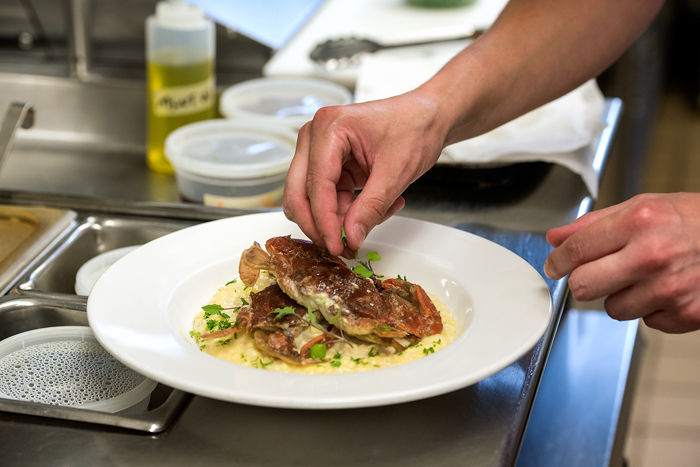 Tom French prepares a dish at the Joshua Wilton House in July 2017. French got his start in the area as a sous chef at Joshua Wilton in 2009.

Tom French, the executive chef of the Joshua Wilton House, is the Best of the Valley’s first ever Best Chef winner.

Daily News-Record readers overwhelmingly voted for French in the category.

“It is always a nice surprise to be recognized for something that you love doing,” French said upon hearing the news of his Best Chef win.

French was promoted to executive chef in February 2017 after serving as the Joshua Wilton House’s sous chef since 2009. He came to Harrisonburg with an impressive resume that included interning at Buckingham Palace.

French was born in Essex, England. He received his culinary training from the Colchester Institute and got his start working at his father’s restaurant, The Kingfisher Cafe.

Around a decade ago, French cooked canapés and other classical French dishes at Buckingham Palace for Queen Elizabeth II, the royal family and their guests for two weeks. His internship also included cooking at Windsor Castle, where the queen was spending Easter.

“It was pretty amazing,” he said in a July 22, 2017, article in the DN-R. “We were doing like 600 staff meals, breakfast, lunch and dinner, and then 15 royal meals, so that would be like breakfast, lunch, light tea and dinner as well for her and her guests and family.”

He then moved to the U.S., serving a brief stint at Keswick Hall in Charlottesville for a year as an intern before moving back to England, where he worked at a few restaurants during his time there. French ended up moving back to the U.S. in 2009 and began working at the Joshua Wilton House, Harrisonburg’s fine dining restaurant and historic inn.

French’s mission in taking the helm of the kitchen at the Joshua Wilton House was to introduce new menu items, including chef specials, and experiment with different cooking techniques.

Jeff Hill, the co-owner of the Joshua Wilton House, said of French’s character in a previous DN-R article, “There’s not an employee that is more passionate about this house than Tom French. He loves the place almost more than me. That tells his passion.”

Hill added that French is quiet, humble and a “tremendous talent.”

French was pleased to receive the recognition as Best Chef of the city he’s grown to love.

“Harrisonburg has become my home and we love serving our community,” he stated in an email. “We hope that this will encourage others to come in and try the cuisine that we put so much hard work into.”

French was sure to thank his kitchen crew at the Joshua Wilton House.

“Best Chef of Harrisonburg is a great honor to receive, but I couldn’t put out the dishes that we create without the help of an amazing team.”