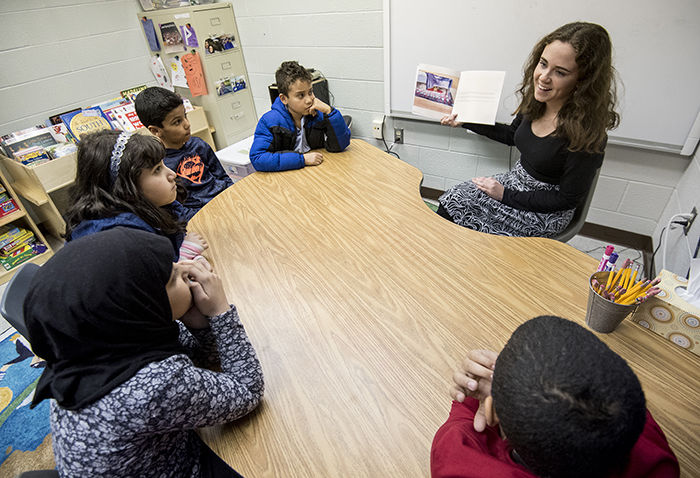 Stone Spring Elementary School English as a second language teacher Lauren Pichon reads “Messages from Maryam” to one of her classes Monday afternoon. Pichon authored the book drawing off her experiences with Iraqi refugees she had as students. 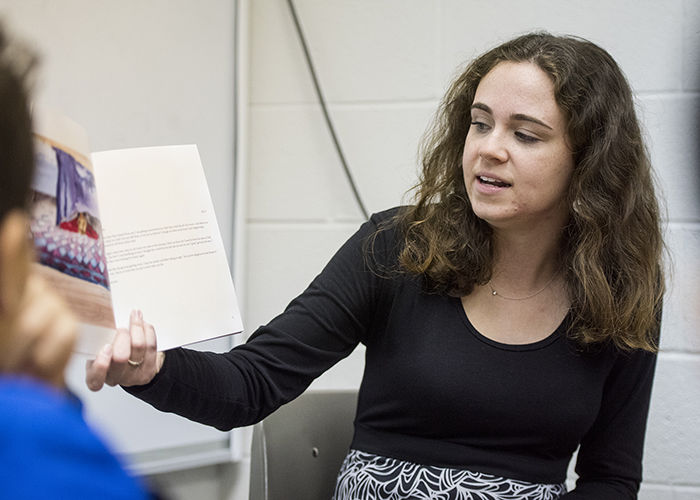 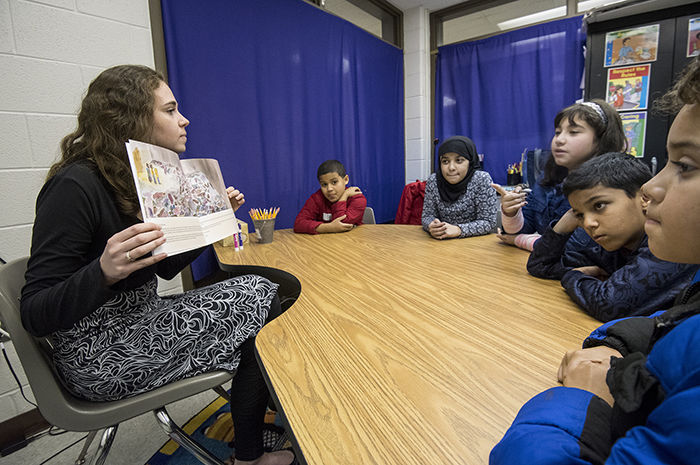 Stone Spring Elementary School English as a second language teacher Lauren Pichon reads “Messages from Maryam” to one of her classes Monday afternoon. Pichon authored the book drawing off her experiences with Iraqi refugees she had as students.

A Stone Spring Elementary School teacher penned a children’s book inspired by Iraqi refugees who were in her English as a second language class.

Titled “Messages from Maryam,” Lauren Pichon’s book tells the tale of two best friends — Maryam and Aila — who are separated in Mosul, Iraq, and reconnect at school in the United States. The book is written in a series of letters back and forth between the two girls. They are first sent to a refugee camp in Turkey before arriving in the U.S.

Last year, Pichon spent most of her day working with a small group of students who were refugees from different parts of Iraq. Her inspiration for the book’s plot was sparked by a conversation she had with the students when she told the class of three that one more Iraqi refugee was joining the group.

It turns out the students didn’t actually know their new classmate, but the idea stayed in Pichon’s head.

“That sparked the initial idea of what if there were two best friends who were separated from their home country and reunited at school in the States, which is what happens in the book,” she said.

While some elements of the story are fiction, other aspects are based on Pichon’s students.

“As they started acquiring more language, and I got to know them better — both individually and sometimes with the help of a translator learning about their educational background — I was just really intrigued by their story,” Pichon said.

Pichon is serving her second year as a teacher at Stone Spring Elementary. The Northern Virginia native graduated from James Madison University with a bachelor’s and master’s degree in education.

As an English as a second language teacher, Pichon teaches third and fourth graders who are new arrivals to the country for two hours each day during the language arts block. Not only does she teach the students how to read English, but also general knowledge they need to know about American life.

“We would work on letters and letter sounds, we’d also talk, theme by theme, about other things in English that are important to everyday life, like family, food, words for things at school, words for things around the house, emotions, parts of the body, basic medical terms. … We’d do some social studies and science just to learn those vocabulary terms so they could develop some background about who these famous Americans are that they’re hearing about in class, because they had no frame of reference for who’s George Washington.”

As a result, Pichon developed a close bond with her students and their families.

“It was an experience like no other. I absolutely loved it,” she said. “I think working with students who have such low-language exposure to English helps you create a really unique bond with them because they feel comfortable practicing with you. … They would come find me every morning just to say, ‘Good morning,’ and they would bring me books and ask me to read to them, or sometimes it was things that the family needed help with, like not understanding field trip permission forms, or counting money.”

Yoder started with sketches, then began drawing the scenes to then using watercolors to paint.

To make her illustrations as realistic as possible, Yoder researched everything from the landscapes of Iraq, to what refugee camps look like, down to typical Iraqi attire.

“I spent time watching videos on YouTube of how people wrap hijabs so that I would know how to draw them, how those folds work,” Yoder said. “Even for the refugee camps, or what homes would look like. I’ve never been to Iraq, so that was something fun to research and something we felt was important because we wanted it to be an accurate portrayal of their experience.”

Yoder and Pichon used caution in their depiction of the refugee experience. While they wanted “Messages from Maryam” to realistically convey the hardships and horrific experiences faced by Iraqis, they also had to keep in mind that the book was intended for children.

Yoder said she also wanted her illustrations to be sensitive to refugee children who may read the book, so as to not “bring out awful memories in a bad way, or belittle their experience.”

While not all students can relate to being a refugee, the overarching theme of the book is friendship. Pichon hopes the book will help students empathize with their refugee classmates and that the refugee students will know they are not alone.

“I think it was just important to share because it’s so easy for us to look at refugees as people who need help, or as numbers of children that we need to service at school for extra English support, and it’s easy to lose sight of the fact that they’re real people. They have dreams and hopes and when they leave their home countries, sometimes they lose friends,” Pichon said. “I think those are things we can all — not necessarily relate to — but can see that humanistic perspective of what they’re going through and that’s really important for our society right now.”

Pichon read “Messages from Maryam” to her class last week. She said the kids were excited about the book.

The book, which Pichon independently published, contains suggestions for teachers about how to use the book in the classroom, how to start discussions in class and how teachers can support their refugee students.

The Harrisonburg City Public School system purchased copies of “Messages from Maryam” to distribute to school libraries in the division. Stone Spring currently has two copies on hand. The book is also available on Amazon and lulu.com.

Pichon has more ideas for children’s books that she plans to write in the future. But right now, she is focusing on “Messages from Maryam.”

“It’s exciting that we have a book to share and that it will be accessible to [refugee] children who have experienced that or [those] who need to learn about that to support their friends,” she said.