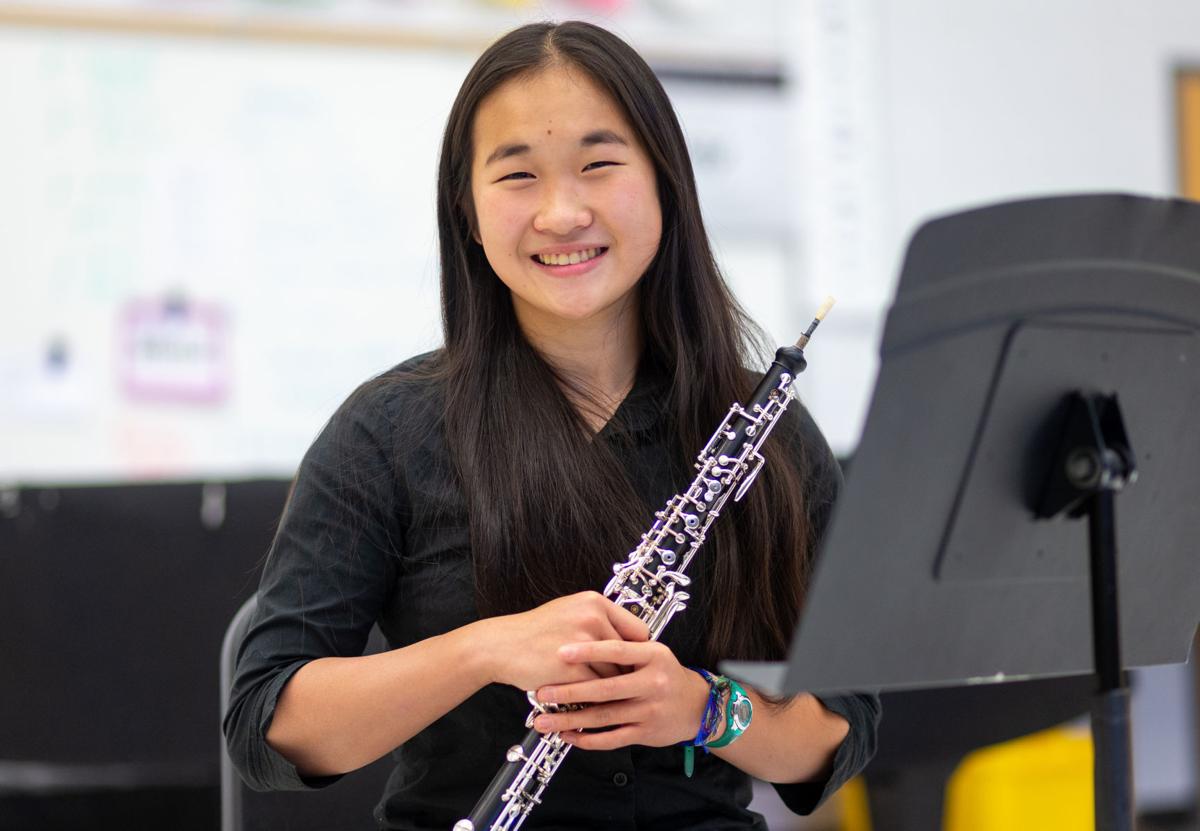 Harrisonburg High School sophomore Cindy Liu poses for a photo with her oboe. She recently won a competition held by the Waynesboro Symphony Orchestra and will be performing a solo during one of the orchestra’s concerts in February. 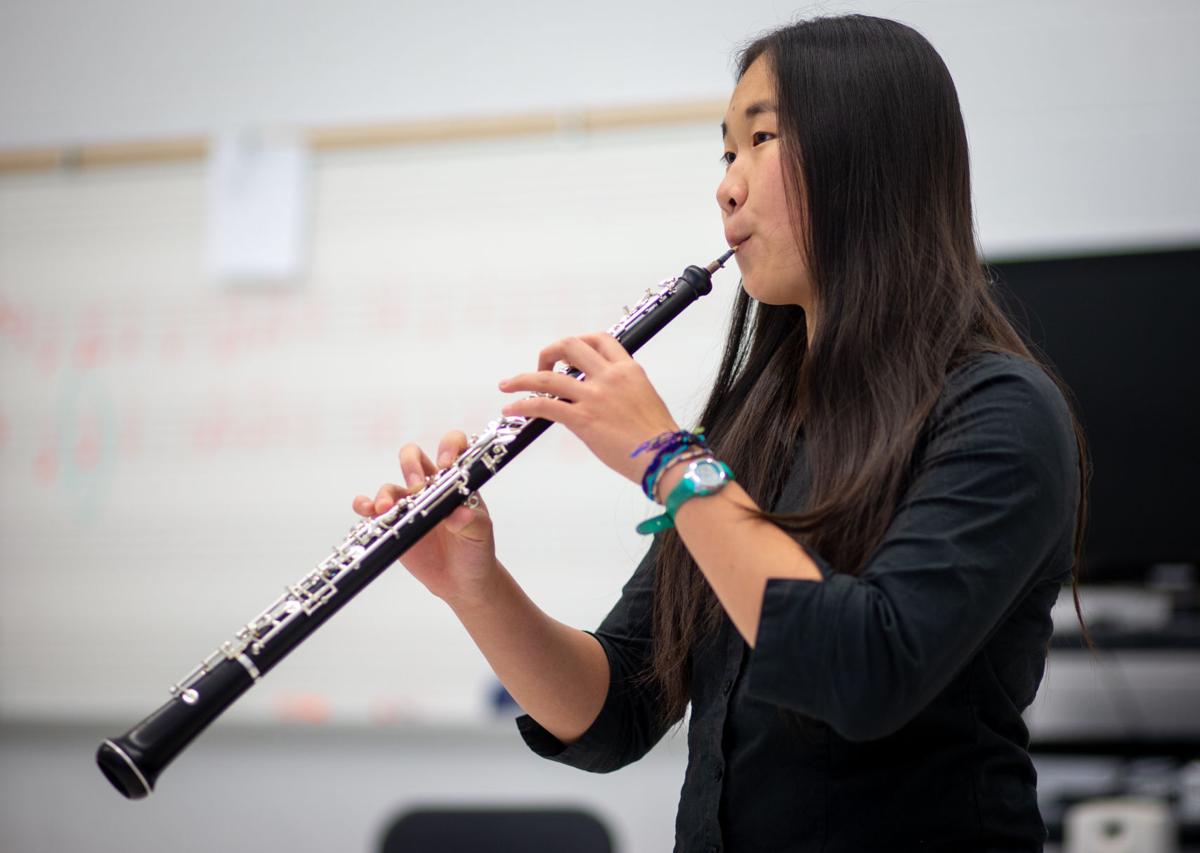 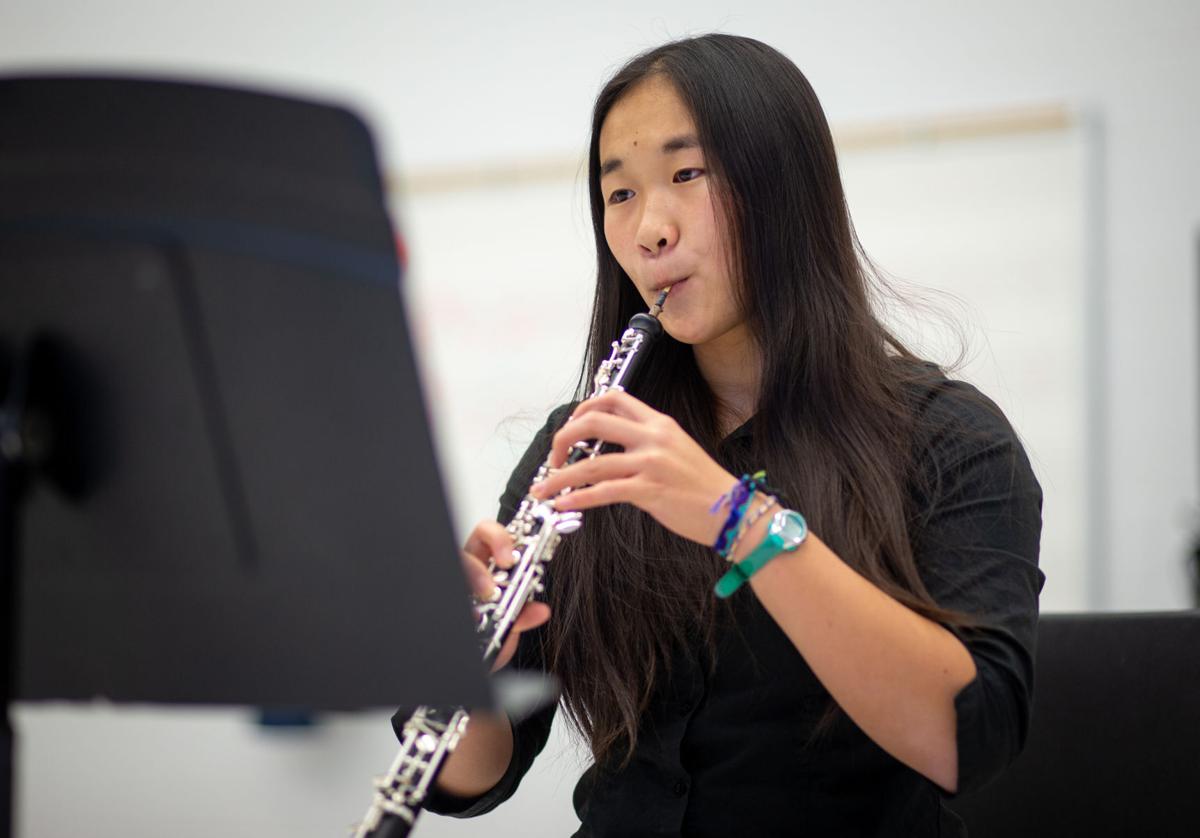 Harrisonburg High School sophomore Cindy Liu plays the oboe Thursday. She recently won a competition held by the Waynesboro Symphony Orchestra and will be performing a solo during one of the orchestra’s concerts in February.

Harrisonburg High School sophomore Cindy Liu poses for a photo with her oboe. She recently won a competition held by the Waynesboro Symphony Orchestra and will be performing a solo during one of the orchestra’s concerts in February.

Harrisonburg High School sophomore Cindy Liu plays the oboe Thursday. She recently won a competition held by the Waynesboro Symphony Orchestra and will be performing a solo during one of the orchestra’s concerts in February.

When her moment came, Cindy Liu was ready.

Performing the first movement of Haydn’s Oboe Concerto in C Major in front of a panel of judges, the 16-year-old said she got carried away in the flow of the music.

At the end of the song, Liu, who’s been playing the oboe since age 11, reached a cadenza, the orchestral equivalent of a drum solo. It’s an opportunity for the soloist to go off the rails a bit and show off their talents.

Instead of playing it safe, the sophomore at Harrisonburg High School said she let the contrast in her playing fly and took the piece to the extreme.

“I was really going for being dramatic and [playing with] contrast and I think I may have done it too much,” Liu said. “That was a risky decision to make.”

It was a risk that paid off.

Liu was selected as one of three overall winners of the competition that gives youth performers the opportunity to perform a concerto — any piece of music written for a soloist on a single instrument that’s backed by a full orchestra.

In addition to winning a $500 cash prize, Liu will perform the first movement of the concerto with the entire orchestra backing at its winter concerts on Feb. 19 and 20.

The other winners were Zifan Deng, a senior at the Miller School of Albemarle, and Bob Kammauff, senior at Charlottesville High School. All three will perform their winning movements at both of the WSO concerts.

“I was [impressed,]” said Peter Wilson, WSO music director. “Not only the technique but the level of the artistry, the musicality in the students was really refreshing to see.”

The competition allowed for any piece of music written for a solo instrument and orchestra. It allowed all instruments, even instruments that might not appear in an orchestra, like guitar, saxophone or harp.

Wilson said it’s typical for violin, piano and violas to win concerto competitions. However, in this competition, tuba, oboe and a viola won.

Wilson said for musicians, the most exciting draw is that the winners get to perform their concerto with the full orchestra at a concert.

“It’s extraordinarily rare, even for professionals, to get the opportunity to perform a solo with the full orchestra,” Wilson said.

One of seven students to make it to the final round on Nov. 20, Liu performed with a pianist playing the orchestral component of the concerto in reduction.

The rehearsals and concert will be Liu’s first time performing with the full orchestra.

“It will be really cool to interact with a big group like this and get to learn from everyone,” Liu said.

Liu and the other winners will attend two rehearsals leading up to the concerts, which will take place at Staunton’s First Presbyterian Church and Waynesboro’s First Presybterian Church, respectively.

“They’re going to be treated like a professional. They’ll be playing in front of an orchestra with myself as the conductor collaborating with them,” Wilson said. “Trying to manage all of this stuff while still trying to play well [is a big deal].”

Liu, who has played piccolo in the HHS Marching Blue Streak Band and plays alto saxophone and clarinet in the HHS Pit Orchestra, said she’s preparing for the February concert by rehearsing on her own leading up to rehearsals.

“[The nerves haven’t] really set in yet,” Liu said. “We haven’t had our rehearsals yet. I think it will become a little bit more real after we have those.”

The first concert in Staunton will start at 7:30 p.m., and the second concert will start at 3 p.m. The events are free, open to the public and no ticket is required to attend. The students will spend about 10 minutes each performing and the orchestra will offer programming for the other parts of the show.

Providing talented musicians with an opportunity to perform is what the concerto competition is all about, said WSO board member Charles Salembier.

“The symphony has an educational mode,” Salembier said. “[This competition] is a step on the road to filling [the orchestra’s] desire to encourage people at that age to continue.”

Salembier said whether these young musicians go on to become professionals isn’t the point. He said part of the purpose of the community orchestra is to give the opportunity to every kid to reach their musical potential.

Leading up to the competition, Wilson said the orchestra and its board is keyed in with local music programs and teachers, so they knew there were plenty of students nearby.

What they didn’t know is how many students would actually enter the competition in its first year.

“We know that there is the talent, we just didn’t know who would come out,” Wilson said.

Wilson said he was pleased such eclectic instruments won the competition. He said he hopes that will inspire more students to compete in future WSO competitions.

“What we hope is that this will inspire other young musicians to come out,” Wilson said. “For them to see in this first time out these instruments and the fact that they were considered and actually won will do a lot for future competitions.”

The symphony, which focuses on educational outreach as part of its mission, had wanted to do a concerto competition for years. But the idea was tabled last year due to the COVID-19 pandemic.

The symphony wanted the competition to be accessible to any young musician in the area. The competition’s pre-screening was open to any high school-aged musician from 15 counties in the region.

Liu, who heard about the competition from a music teacher, said she was already familiar with Haydn’s Oboe Concerto and decided to enter a video submission for the competition’s pre-screen.

“I put in my pre-screening not even knowing if I was going to get in or not,” she said. “But I did it.”

Wilson said the symphony orchestra will likely continue the competition biennially, or every other year.

“We’re giving young artists who are excelling on their instruments performance opportunities,” Wilson said. “It’s all about that exposure. Maybe in two years [other young artists] could be competing as well and possibly win.”

Liu said performing the concerto in front of the judges helped her build confidence owning her piece. She encouraged other young musicians to join in next time.

“Go for it, because you don’t know where you’re going to end up,” Liu said. “I’ve learned so much from it. You just never know what you’re going to learn along the way.”