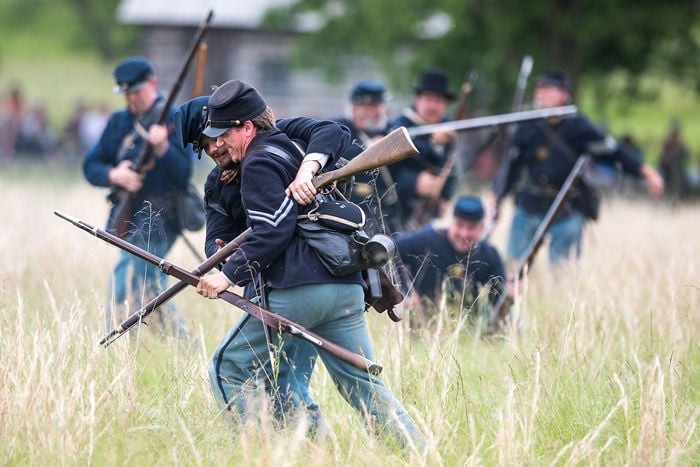 A Union soldier helps his wounded friend off the front line before rejoining the 2017 Battle of New Market reenactment. 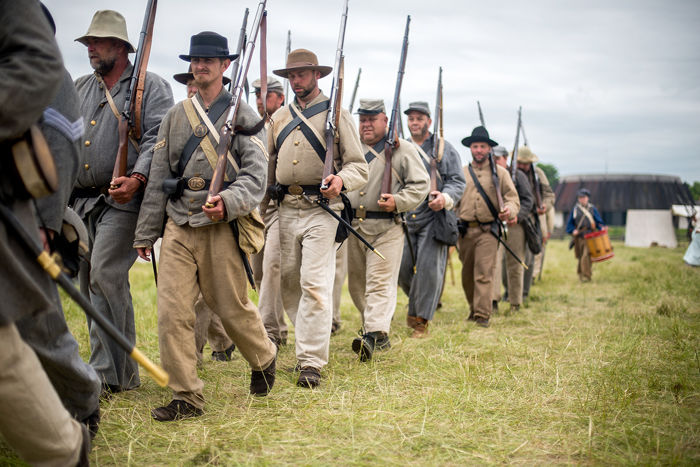 A regiment of Confederate soldiers makes their way out of camp and into the 2017 Battle of New Market reenactment. 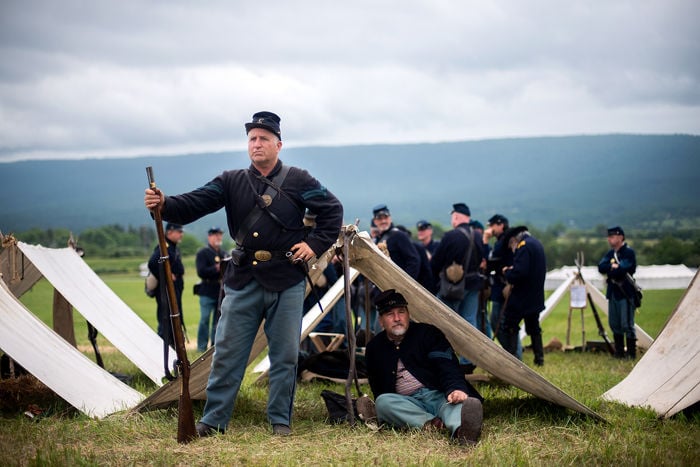 Mike Espenshade (left) of Harrisburg, Pa., and Mark Fasnacht  of Kleinfeltersville, Pa., relax in the Union camp as they wait for the start of the 2017 Battle of New Market. 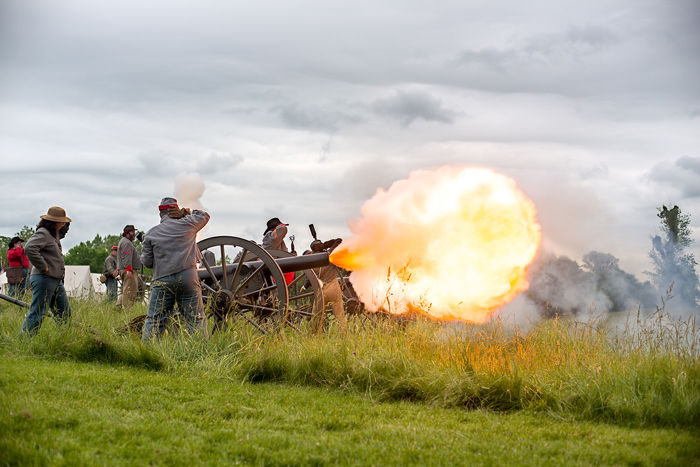 Confederate Cannoneers fire on Northern troops as they retreat during the 2017 Battle of New Market reenactment.

“Did they wear this stuff? Boy this seems hot.”

“How did they brush their teeth?”

“Wow, this is the kind of technology they had?”

These are just a few of the questions Lt. Col. Troy Marshall and his staff get asked by children and adults alike when families visit the New Market Battlefield to for the annual Battle of New Market reenactment.

“It’s connecting in a very relevant way,” said Marshall, a site director for the Virginia Museum of the Civil War. “If it’s not relevant to your life and your life story, most people aren’t going to take the time.”

Close to 3,000 people, including actors and visitors, will converge on New Market this weekend as the battlefield prepares to host the 104th reenactment of the Battle of New Market.

“We’ve been doing this event since 1914, so we have this long institutional memory in running reenactments,” Marshall said. “The irony, in my mind, is in 1914, there were 28 cadet veterans in attendance; talk about pressure to get the history right.”

This year’s event will take place across Saturday, May 19, and Sunday, May 20. And while the whole reenactment will be completed in a couple of days, planning for such a large event starts pretty far in advance.

“There’s a lot of behind the scene backstage stuff that goes on,” Marshall said. “Hiring a coordinator that takes care of our reenactor registration, working with our tenant farmer to make sure the fields are mowed, making sure we have enough potable water. If you’re a spectator, you come in and say that the place looks really good, and we’ve been working on this for nine months.”

There will be many local actors participating in the battle this weekend, but there will also be participants from Maine, New York and Canada. For many of the reenactors, New Market holds a special place in their hearts because it’s one of the oldest reenactments in the country.

“We have a lot of local reenactors that this was probably their first reenactment,” Marshall explained. “This would even be a national trend. If you talked to the reenactors, eight out of 10 times [they’ll say], ‘Oh yeah, the reenactment I cut my teeth at was New Market.’”

As Marshall said, one of the components that makes the New Market reenactment so special is that while it was one of many battle and skirmishes that made up the Civil War, New Market is also where the VMI Cadets made a name for themselves when they charged up Bushong’s Hill to drive the Union army into retreat. Since then, new VMI cadets come to New Market in September to parade through the downtown area, tour the battlefield, take their cadet oath before charging the Bushong Hill like their alumni brethren did more than 100 years ago.

This event goes from 10 a.m. to 5 p.m. on both Saturday and Sunday and includes living history of the Bushong Farm, artillery demonstrations, historical lectures and the main event: the battle. Admission is $10 for ages 10 and older; nine years and younger get in free.

Marshall said the Battle of New Market reenactment is important because it gives different types of learners a way to experience history outside of the classroom.

“There’s various ways you can understand, experience and participate in your own learning,” he said. “You can do living histories, guided tours, podcasts, but the reenactment is an interesting way. The reenactment is a visual program for people to understand and connect.”