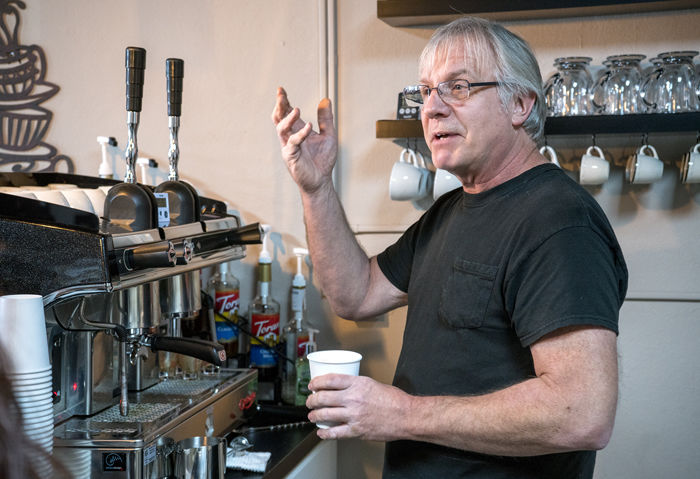 Curtain Call Coffeehouse and Cafe owner John Boor chats with customers as he prepares an order on April 2. 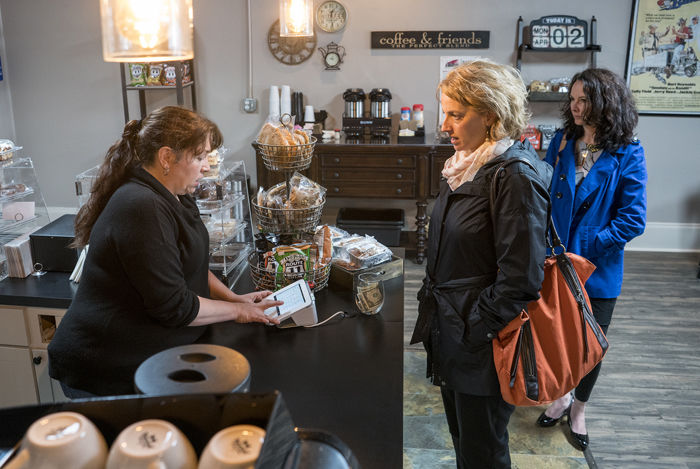 Barista Angela Hosier (left) takes an order on April 2 from Stacey Weakley (center) of Harrisonburg and Shonda Avis of Woodstock. 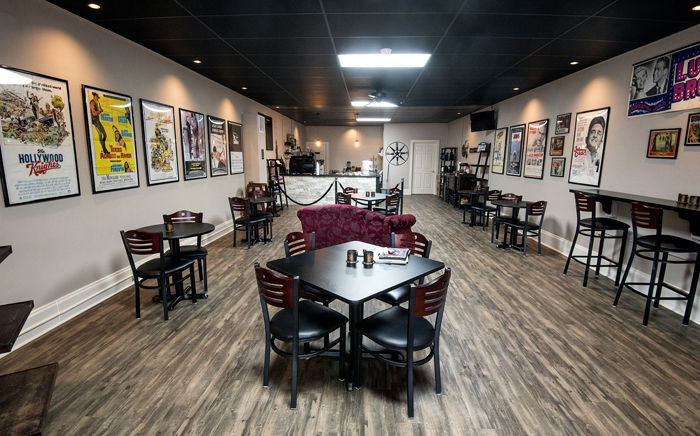 John Boor hasn’t stepped inside a movie theater since 1977.

Despite this self-imposed exile, Boor’s passion for old-fashioned movies and theaters drove him and his wife, Laura, to purchase the former Nelson Theater and the property next door on Mount Jackson’s Main Street in 2012.

The Boors opened the Curtain Call Coffeehouse in the storefront at 5966 Main St. on March 31. They have started renovating the theater and plan to reopen it in the next two to three years, John Boor, 61, said.

Curtain Call is open Monday through Saturday from 6 a.m. to 3 p.m. It serves cappuccinos, lattes and other drinks, sourcing coffee beans from two Valley roasters: Kevin Fox of New Market and Brandon Belland of Berryville.

Evidence of Boor’s passion and the theater’s history line the cafe’s walls. In addition to original posters and lobby cards from such films as “The Godfather” and 1951’s “Lullaby of Broadway” starring Doris Day, framed photos of the Nelson’s lobby and stage from around 1947 greet customers upon entry.

Boor has collected the posters and cards over the years, while the photos came from Jacqueline Zehring, the daughter of the late state Sen. Burgess Nelson, who opened the theater in 1946.

One photo features the marquee, which advertised how the theater had then-new technology of air conditioning.

“I want to bring that [advertisement] back,” Boor said.

Boor was raised in a small town in New York near the Massachusetts border. He and his wife moved to the Valley 20 years ago when the commercial printing firm he worked for transferred him to Woodstock.

His new home turned out to be the perfect fit, he said.

“I love history, and this area is full of it,” he said. “We love the historic district [in Mount Jackson] because it hasn’t been commercialized yet.”

That commercialization is partly what has fueled Boor’s disdain for modern theaters, he said, citing one Winchester multiplex as an example.

“There are none of the old-school theaters left,” he said. “Most of them were overtook by the Alamos.”

Though Boor would like to see more shops open downtown, he wants them to be locally owned and operated to preserve the small-town atmosphere that he and Mount Jackson’s “old-time natives” grew up in.

“I don’t want to see this stuff disappear,” he said. “Eventually, it’s going to be gone. You’ve got to remember where you came from.”

In addition to preserving that atmosphere, Boor’s main priority in opening Curtain Call is to provide a place for people to forget about the world for a while.

“There’s just too much going on,” he said. “Sometimes, you have to sit back and relax.”

After opening the cafe, the Boors’ next priority is the Nelson. They renovated the theater’s lobby and two apartments on the building’s second floor, and are looking into applying for grants or loans from Shenandoah County and the state.

The couple still have a long way to go before they can open those doors, Boor said.

“Renovating the auditorium is going to be an ordeal,” he said. “We have to put the seats back in. We’ll need to get some help with that, but we enjoy bringing old things back to life.”