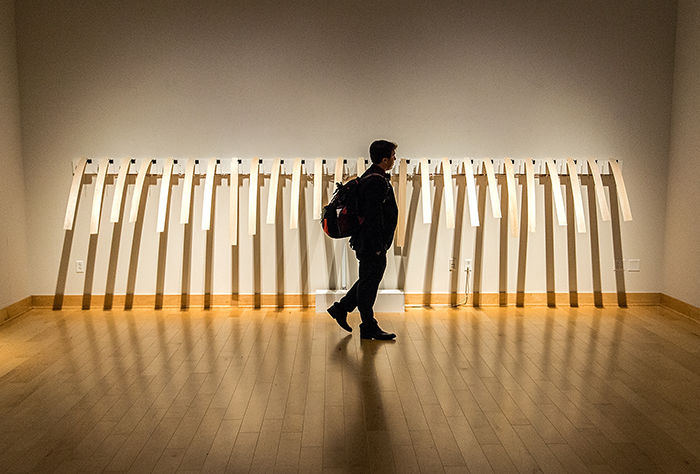 Brian Hernandez, a James Madison University junior from Falls Church, walks past one of the art installations at JMU’s Harmonic Laboratory exhibit on Friday. 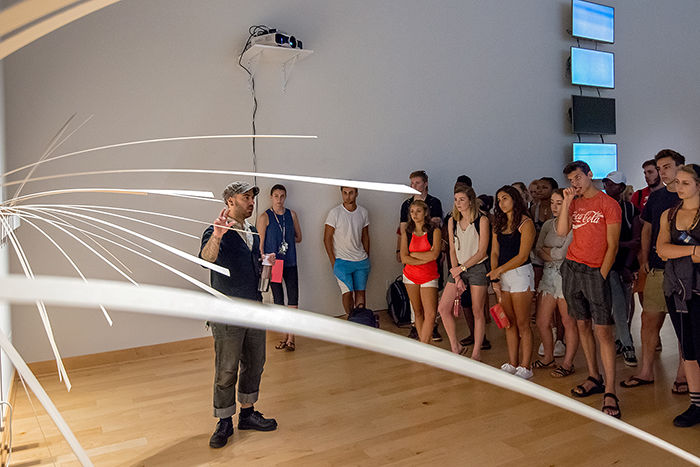 Rob Mertens, an assistant professor and fiber art coordinator at JMU, leads a group of students from different arts classes on an exhibit tour Friday. 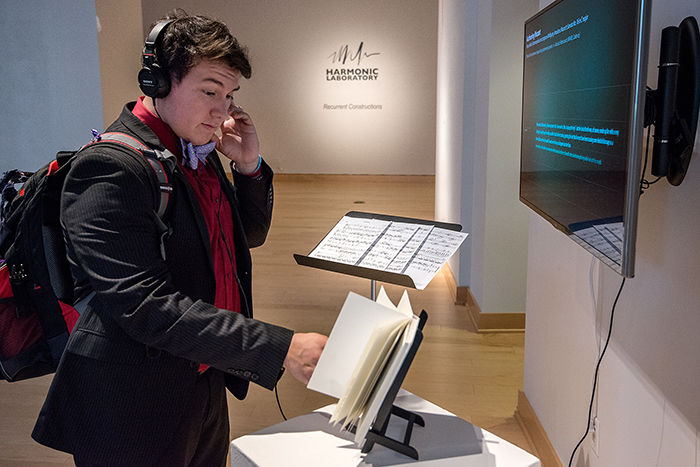 Brian Hernandez, a JMU junior from Falls Church, listens to Mozart and reads from Franz Kafka's, "The Metamorphosis" as one of the art installations at JMU's Harmonic Laboratory exhibit on Friday.

Brian Hernandez, a James Madison University junior from Falls Church, walks past one of the art installations at JMU’s Harmonic Laboratory exhibit on Friday.

Rob Mertens, an assistant professor and fiber art coordinator at JMU, leads a group of students from different arts classes on an exhibit tour Friday.

Brian Hernandez, a JMU junior from Falls Church, listens to Mozart and reads from Franz Kafka's, "The Metamorphosis" as one of the art installations at JMU's Harmonic Laboratory exhibit on Friday.

It’s rare that one hears the word “art” and pictures a column that uses four projectors to create one uninterrupted, moving artwork.

Or five vertical televisions configured to show a trampolinist jumping seamlessly from screen to screen.

Or a kinetic sculpture that creates sounds when people tweet as a physical and digital exchange.

But that’s what James Madison University fiber arts professor Rob Mertens got when he partnered with former classmates in Eugene, Ore., at the Harmonic Laboratory interdisciplinary artist collective.

“The School of Visual and Performing Arts emphasizes for faculty to do cross-discipline work with other faculty,” said Mertens, who also helps the theater department with sound design. “We don’t just do one thing; We wear many different hats.”

Mertens took it one step further, mixing science and the arts, and the end result is the “Harmonic Laboratory” exhibit, which opened at the Duke Hall Gallery Sept. 5.

The members collaborated on each of the seven pieces of art in the exhibit for the first marriage of digital and traditional art that JMU has seen.

For one piece, Garner choreographed a dance that was then filmed and edited by another artist before being synced with four projectors to be displayed on a large wall at the center of the exhibit.

“The wall is mapped so the video splits between projectors and makes a seamless projection. The third projector is added to fit just on the edges of the wall,” Mertens said. “It’s like sculpting video into space.”

The goal of the exhibit is exploring how technology informs art, so the group focused on how technology can be used with dance, music and the visual arts.

In stretching the creative mind, Mertens hopes to affect both art professionals and the public’s perception of art.

He said people often settle into their disciplines with no thought of interconnectivity.

“The arts aren’t necessarily a solo act,” he said. “There is an assumption that there’s a lone genius working with a painting in a dark space in the visual arts building. That can be true, but it’s not an absolute truth.”

Mertens wants viewers to walk away with a broader sense of the artistic disciplines.

“I’m hoping [the exhibit] breaks down what people expect from visual art,” he said. “I want to challenge what people consider is a music composition and whether that can be something interactive or result in some type of interaction.”

The artists of Harmonic Laboratory will be at JMU Sept. 15 to give lectures in dance, music composition and digital art, according to gallery director Gary Freeburg.

“The artists are coming Thursday night to give a talk,” he said. “They will be on campus for about three hours, talking about what’s going on here and walking through the gallery to show people what’s going on.”

The Duke Hall Gallery is open Monday through Friday from 10 a.m. to 5 p.m.