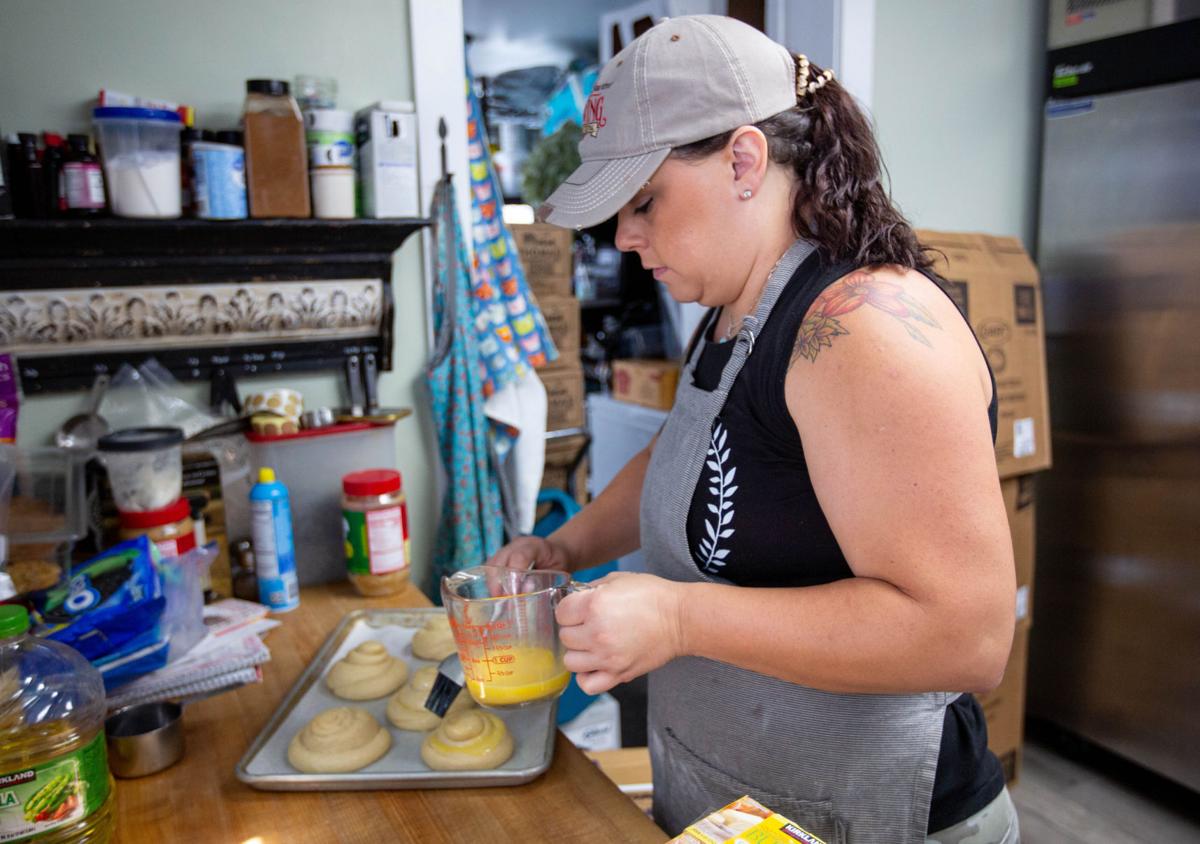 Sugar and Bean Cafe and Baking Co. head baker Allison Wettstone prepares pastries in the back of the Bridgewater business earlier this month. 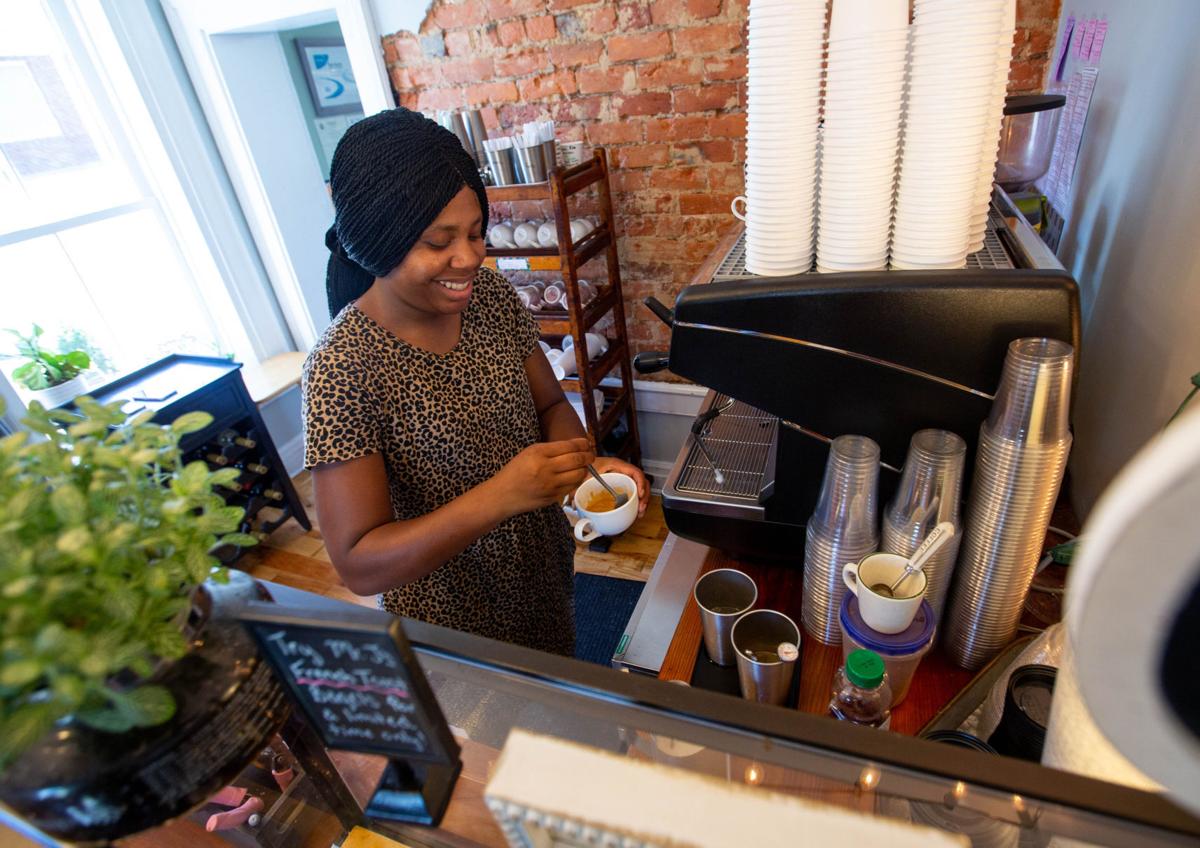 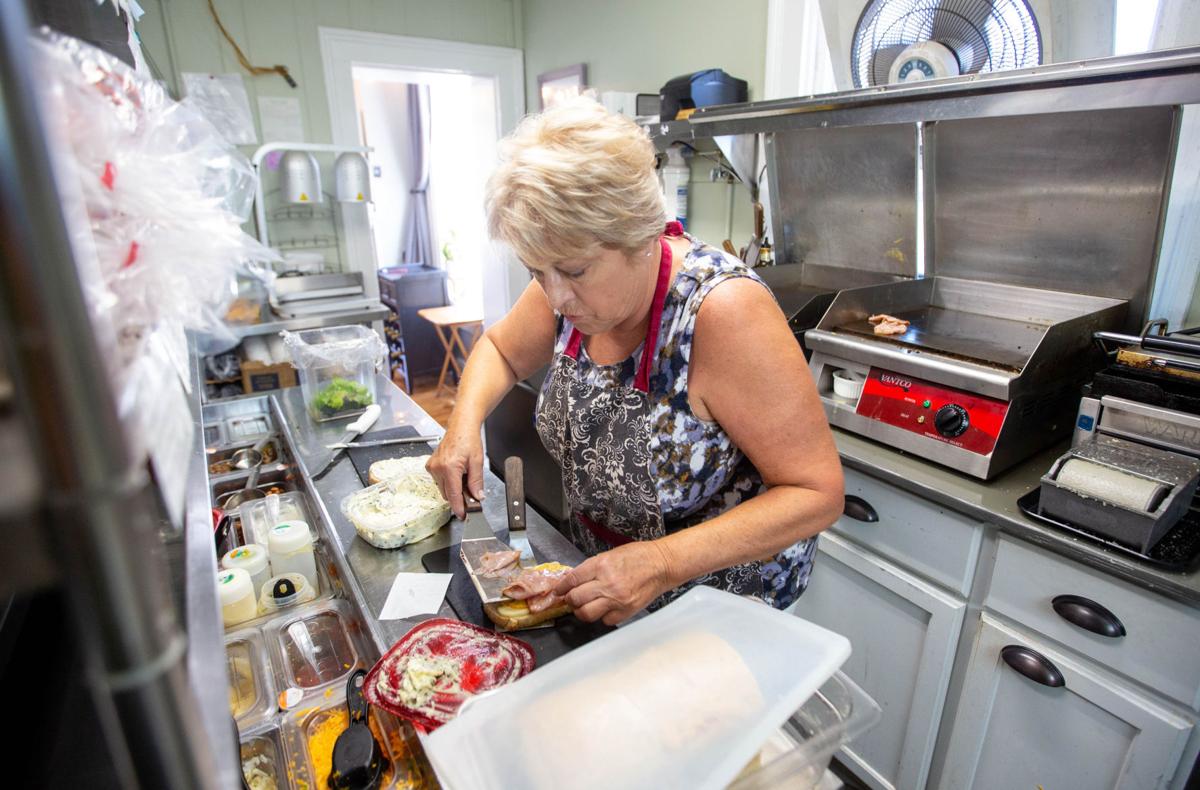 Sugar and Bean Cafe employee Debbie Claytor prepares a sandwich for a customer.

Sugar and Bean Cafe and Baking Co. head baker Allison Wettstone prepares pastries in the back of the Bridgewater business earlier this month.

Sugar and Bean Cafe employee Debbie Claytor prepares a sandwich for a customer.

With tattoos trailing up and down her arms and a bandana on her head, Allison Wettstone, head baker, resembles Rosie the Riveter as she quickly works dough into rolls in the kitchen of Sugar and Bean Café and Baking Co.

"There's so much creative freedom in this business," Wettstone said. "I come up with new recipes for weekly specials, and I love testing them out on our staff."

The woman-owned and largely woman-run baking company cranks out classic treats like cream pies and cinnamon rolls from the kitchen of a historic Bridgewater house-turned-café and at the Harrisonburg Farmers Market. The steady stream of customers cycling in and out of the building agree there’s something special about Sugar and Bean.

For the team, the recipe for success is a straightforward one: offer fresh food choices, sprinkle with creativity and serve with excellent customer service.

“I never compromise on the quality of food we offer,” owner Heather Benin said. “I think when you offer good food, people appreciate it. We bake all of our bread in-house and the smoothies are all fruit -- they don’t have any added sugar or powders.”

Benin, a native of Rockingham County who got a master's degree in counseling from Eastern Mennonite University, started Sugar and Bean at the Bridgewater Farmers Market in 2015 after she became a stay-at-home mom. The business moved to the Harrisonburg market shortly after and the café opened in February 2020 after a yearlong restoration took place.

“Bridgewater is great, and there are a lot of wonderful coffee companies and the Sipe Center,” Benin said. “When I became a mom, I started thinking of what I would want downtown. My friends and family encouraged me to restore the house. I’ve always been a baker, and I found that I enjoy hospitality and development.”

At a sunny outdoor table next to the house, Jacob Turner, a nursing student at EMU and certified nursing assistant at Augusta Health, said he enjoyed spending a day off drinking a mug of coffee at the café.

“Sugar and Bean has the most beautiful mugs, and for the longest time during the pandemic they were just sitting on the shelf,” Turner said. “I’d been waiting to drink out of one for so long. I love the atmosphere and the friendly staff.”

Behind the counter, Alcinda Brubaker helps a young mom and her army of kids pick out drinks, while expediting to-go orders with a smile. The front of house manager said she’s inspired to be part of such a powerful and accomplished team, including Benin, Wettstone, and Holly Labbe, another team member who has a master's of fine arts in dance from Case Western Reserve University.

Brubaker and her boyfriend, Wade Puffenbarger, who boast side hustles including freelancing and a beard care company, were part of the seven-person team for Sugar and Bean’s booth at the Red Wing Roots Festival. Puffenbarger seemingly guessed what customers were going to order, while Wettstone made smoothies appear in seconds.

“We were prepared to work as vendors because of the farmers market,” Benin said. “It was a success. Our breakfast sandwiches were popular all day long, and we sold out of some of our smoothie flavors.”

To Benin and her team, excellent customer service and fresh food are no secret ingredients, and they heap them on for no extra charge. Benin said her preteen daughter, Ella, a self-proclaimed "extrovert," has grown up with the farmers market and has a gift for helping customers.

“People ask for [Ella] when she’s not there,” Benin said. “She learned math from helping out at the farmers market. She enjoys working with people and really has a talent for customer service.”

During the pandemic, innovation was the name of the game.

Wettstone’s recipes were featured in weekly “Bakery Box” pickups, where Sugar and Bean offered a selection of breads and baked goods to satisfy customers’ want for wholesome treats. Curbside pickup emerged in the parking lot of the café, and carryout is still a popular option for regulars, who can also opt to dine in one of the cozy rooms of the café.

“I like to get creative with it, and that's what I love about this job," Wettstone said. "For example, my daughter has celiac disease, so I’ve worked a lot with gluten-free baking and how to make it taste good, which is actually pretty challenging."