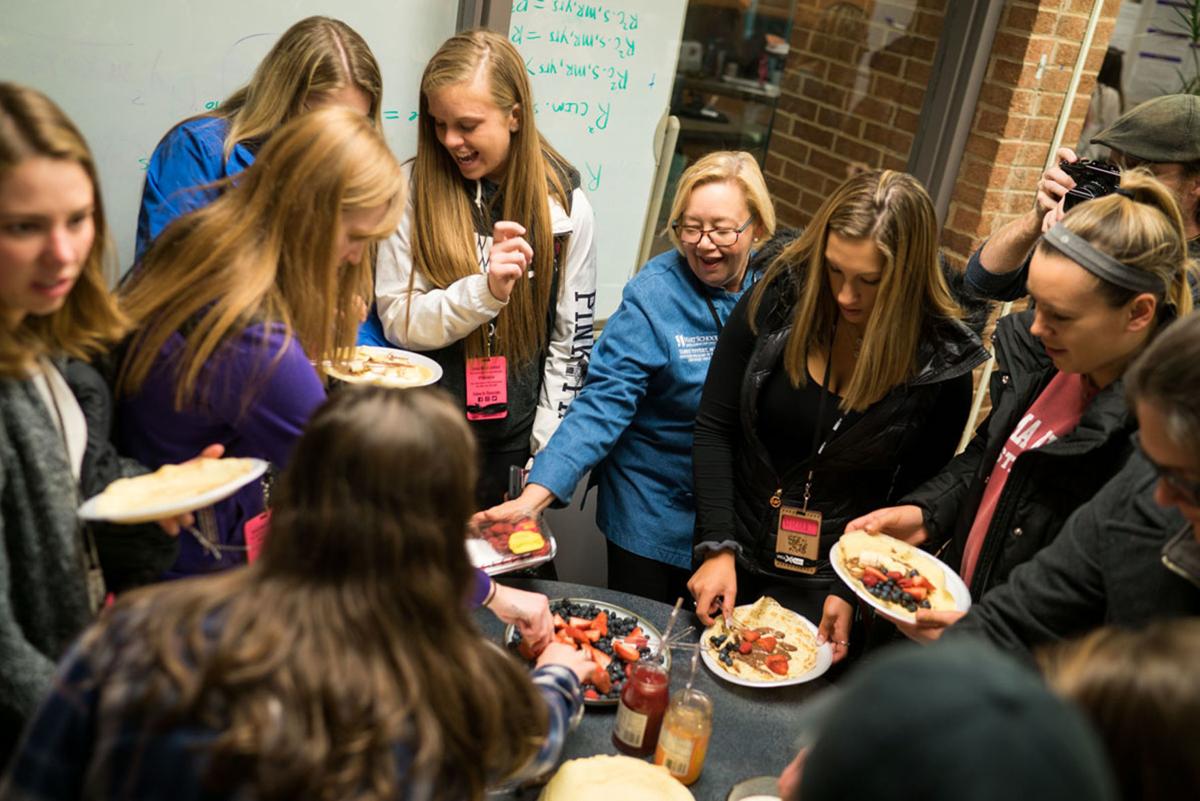 Participants in a pop-up class learn how to make crêpes with Tassie Pippert (center), a lecturer in the James Madison University Hart School of Hospitality, Sport and Recreation Management. 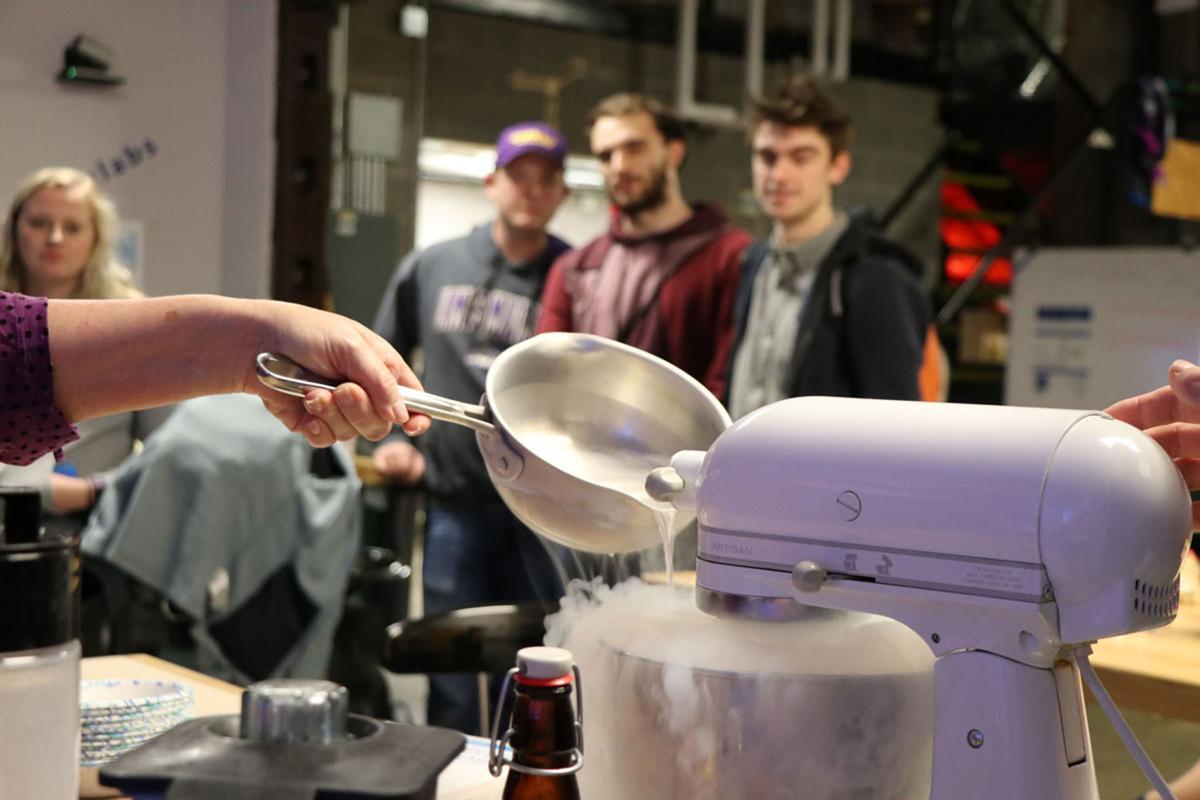 Participants learn how to make liquid nitrogen ice cream in a pop-up class.

In the ever changing world of education, it’s vital that people continue to be students; lifelong learners try to evolve with science and technology.

Now, that’s not always easy as it seems like tech changes on a daily basis, but with programs like James Madison University X-Labs and their pop-up classes, it’s becoming easier to explore outside the traditional classroom.

“We were asked in 2011, as part of a program called 4-VA, to share STEM [science, technology, engineering and math] courses,” said Nick Swayne, 4-VA executive director and campus coordinator at JMU. “We’re sharing STEM courses with the other universities in Virginia.”

Originally, the organization was given a conference room on campus, but as Swayne explained, that’s not where STEM is conducted. So, after a few years, they were given a lab space in Lakeview Hall with enough room to set up shop, so to speak, to offer JMU students a way to integrate STEM into their current studies.

“The tables move so we can reconfigure for whatever kind of course it is,” Swayne said. “Then, we had to have the kind of tools necessary for students; you don’t have a laser cutter in your dorm. The kind of homework we assign for our students is significantly different than they would get in their regular class.”

Kelsey Tate, 4-VA assistant director and JMU deputy campus coordinator, added, “We teach about six classes back here per semester. They’re all interdisciplinary and they all have between 30 and 60 students, which is a great class size, but doesn’t cover all of JMU’s campus.”

The courses have had students from 35 different majors take part, and as Swayne explained, the goal of X-Labs is to pull students in from every discipline around campus. They do this by offering semester classes in areas such as augmented and virtual reality, hacking for defense, drones and a collaborative student-run food truck called Fueled that sets up behind Wilson Hall.

But, despite reaching hundreds of students each semester, the X-Labs still wanted a way to reach an even broader scope of student.

“As a way to get people to know about the program and bring students from different disciplines together, we started having pop-up courses,” Swayne said. “The pop-up courses are informal; students don’t have to be signed up for a course. They can come in, get accustomed to it and figure out what’s what. The pop-ups are a big, broad perspective of all the different things you can do in a space like this and how they all relate back to STEM.”

The pop-up courses are taught by faculty or students who have a lot of experience in the subject of the course. While they’re mostly geared toward JMU students, they are also open to faculty, staff and community members, room permitting. Some of the courses that have been offered are 3D printing, cooking, drones and weaving. Other courses are also taught in the pop-ups, which are usually offered twice a week during the fall and spring semester. The organization is always looking for ideas to make happen as well, and you can suggest topics on the JMU X-Labs website.

“A lot of the classes are pretty low barrier; they’re intended to be that way,” Tate said. “A lot of times people are just coming in and experiencing something for the first time. Usually, it’s the excitement that makes them want to figure out how to get more plugged in so we can connect them directly with faculty or share with them the opportunities for classes next semester.”

Claire Fulk, the student coordinator of the pop-ups, said some of the courses have generated enough interest that another session will be offered later on in a semester or again the following semester. She also explained that having the classes is a great way to get faculty involved in the X-Labs because some professors will have ideas for pop-up classes they want to teach or join.

In the future, while details are still undecided, X-Labs hopes to expand and be able to reach not only more students, but more members of the Harrisonburg and Rockingham County community.

Tate added, “We kind of treat everything as a pilot. We have something that we think is working and we would love to expand it and have it reach more people, but just figuring out the logistics of it is: What’s holding us back from being able to scale it?”

As Fulk, who also teaches some of the pop-up courses, explained, it’s been exciting to see the number of students taking the courses increase in the past three to four years.

“At the beginning of each pop-up, I like to ask, ‘How many of you have been here before?’” she said. “They raise their hand and it’s been really cool to see that, since the beginning of pop-ups, the number of hands that go up have increased and they bring in more people.”

For more information on the X-Labs, the pop-up classes and to register for a future pop-up course, visit the JMU X-Labs website.