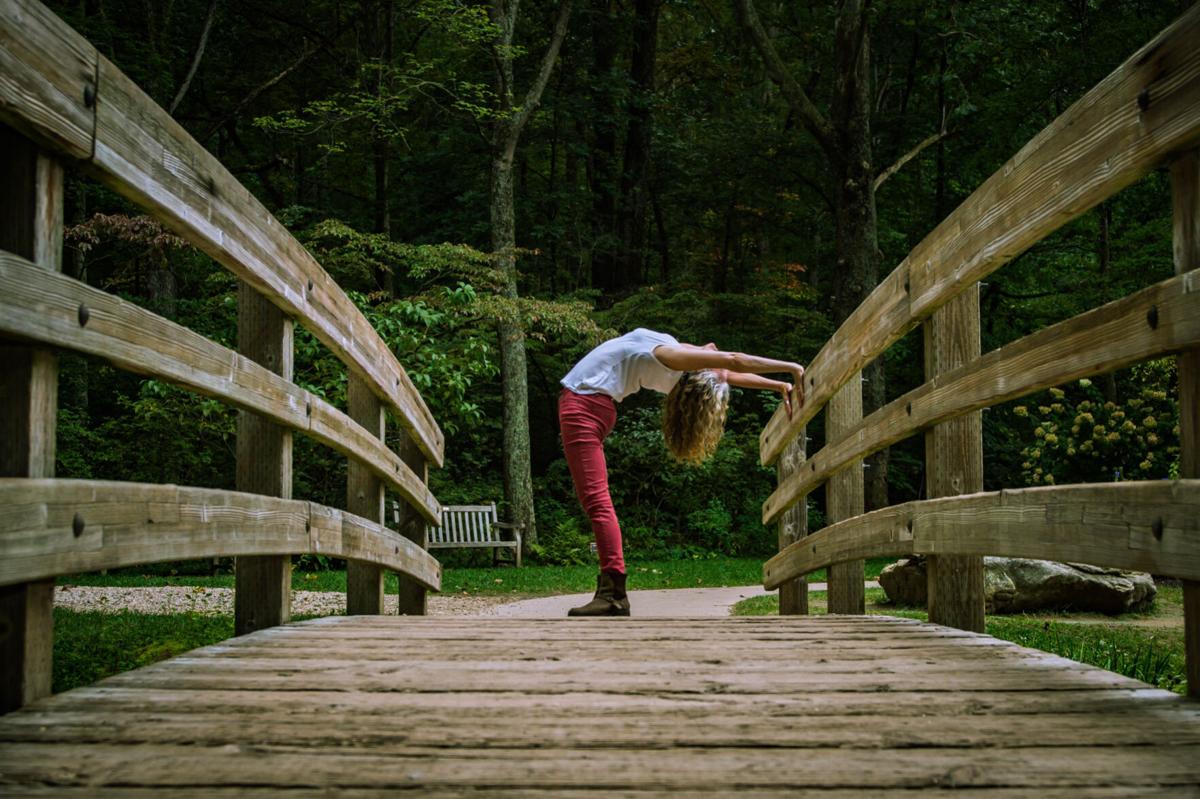 Director of The Center Yoga Suzanne McCahill Perrine does a backbend on a wooden bridge at the Edith J. Carrier Arboretum. 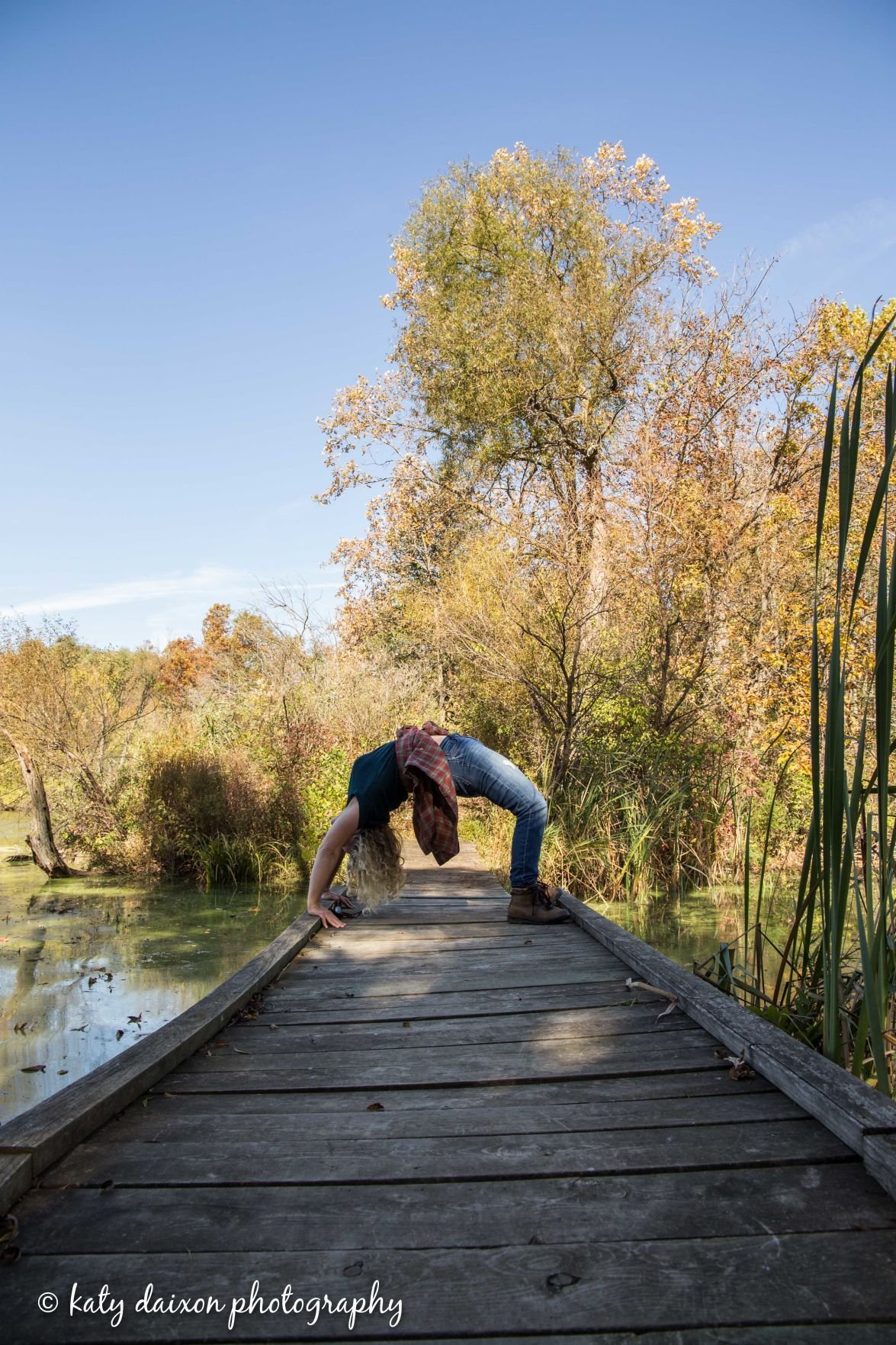 Brienne Diebolt-Brown leans completely into an arching backbend on a bridge at Ice Age Trail in Whitewater, Wis.

Director of The Center Yoga Suzanne McCahill Perrine does a backbend on a wooden bridge at the Edith J. Carrier Arboretum.

Brienne Diebolt-Brown leans completely into an arching backbend on a bridge at Ice Age Trail in Whitewater, Wis.

Whether slouching over your laptop for eight-hours of Zoom meetings or craning your neck through another season of Netflix binging, working from home and living in isolation has proven an adversary of good posture.

But lazily leaning, hunching and slumping are not as harmless as it seems.

According to Harvard Medical School, bad posture is a gateway to bad balance, headaches and breathing difficulties and can also promote bigger health concerns such as heartburn and incontinence. Yoga instructor Brienne Diebolt-Brown is leading the final part of her four-part series of quarantine workshops this morning with a class designed to strengthen the core and posterior chain in retaliation of pandemic postures.

“Most of us round our shoulders forward typically, but even more when you’re sitting down, so you’re somewhat hyperventilating all day,” Diebolt-Brown said. “Backbends open up your chest so you breathe better.”

Diebolt-Brown has trained in several styles of yoga such as Ashtanga and Vinyasa she pairs with her experience as a former master’s student in health education and physiology to develop movements accounting for chronic diseases, physical disabilities and different bodies.

“I have a pretty good idea of how to help people, no matter what their issues,” she said. “Yoga does not require flexibility. Yoga is essentially personal physical therapy.”

The Center Yoga is located on Liberty Street and offers a range of class structures designed for meditation, spiritual connection or physical invigoration.

Diebolt-Brown worked at The Center years ago when she lived in Harrisonburg before relocating to Wisconsin. As the world took to virtual interactions, director Suzanne McCahill Perrine said she decided to reconnect with the former instructor and bring more classes centered on physical health to Harrisonburg.

“Her classes, they really teach students to understand their body and understand why specific movements matter rather than necessarily doing poses and copying the teacher,” McCahill Perrine said. “You can take the practice, do it on the mat and then have it impact your life.”

Slow Your Roll: Battling Zoom Fatigue was the first workshop in Diebolt-Brown’s quarantine workshop series, which offered beginner-level yoga focusing on core strengthening and shoulder opening. The second class, Cracking the Code: Finding Depth in the Basics, targeted the principles and techniques behind basic postures to explore individual limits and understand the steps between novice and advanced poses.

Hips Don’t Lie: Targeting Hips & Low Back Pain was the most popular class yet, according to Diebolt-Brown, and the class worked to develop strong hip alignment and learn quick stretches that can be done between chores off the yoga mat.

“It gets rid of the hump in your back, that neck pain a lot of people have. People with low-back pains get more relief if they can get part of their upper back stronger,” Diebolt-Brown said.

Backbends are a more advanced movement because it is the least mobile part of the body and most people have developed strength in their front chest muscles as opposed to their back. But for those who do train to relax and strengthen their backs, there are great rewards.

“If you do them regularly, you actually get a burst of energy,” Diebolt-Brown said. “It’s almost like drinking a cup of coffee.”

The Zoom class is $25 and requires preregistration at least 15-minutes before class is scheduled to begin. Diebolt-Brown’s Build Better Backbends: Creating Strength in the Core and Posterior Chain virtual lesson begins at 10:30 a.m. and lasts two hours.

“I doubt I’ll do this every month, but I suspect it will become a regular thing,” Diebolt-Brown said. “Be a part of the community and have a nice way to breathe and deal with pent-up tension and worry and confusion.”